The Character Page for Twitch Plays Pokémon: Arena. For a directory of all character pages, as well as characters shared between runs, see here.

Crimson and Azure/Rusty and Maya 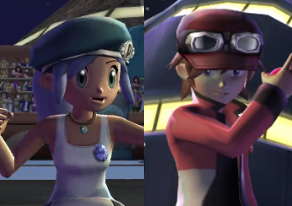 Maya and Rusty.
Crimson and Azure are the pair of trainers who lead Red Team and Blue Team in stadium battles. In PBR they are replaced by new trainers, Rusty and Maya, to captain Red and Blue Team in the new stadium for free. Might be hosts of some kind. 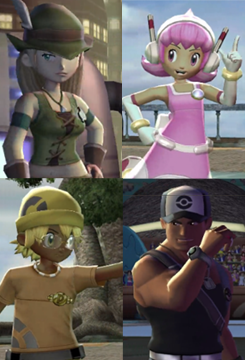 The commentator for each battle in Stadium and Stadium 2. Several of his hammy stock lines have become memes in the chat.

The commentator for battles in PBR. While not as hammy as his predecessor, some of his lines have become meme worthy with the chat.

A woman who works for Poketopia, giving Maya and Rusty their Pokemon to battle with and transporting them to the various coliseums.

Cyndy and Zackary
Two trainers from Poketopia who sometimes get accidentally picked to battle Maya, causing the game to crash.
Advertisement:

Whoever has bets the most has the most sway in what moves get chosen for their team.

All users get 100 Pokedollars if they bet all their money and lose (Or their difference is less than 100). 500 if you're a subscriber.
The Bots

A leader board that shows up every hour to show the standings of each participant. Numbering in the thousands including people who have only bet once over the 6 month period.

A group of official and fanmade bots that automatically report data back to the users.

These attacks are able to knock out a Pokemon in one hit with the draw of having 30% accuracy. The meme was commemorated and personified in a battle between Kingler, Nidoking, and Gligar on the blue team and Diglett, Seaking and Nidorino on Red.

Any move that does massive damage but has a low hit rate. That is unless a Pokemon has No Guard as an ability.

Cause massive damage, but the user faints. The meme was commemorated and personified in a battle between Geodude, Pineco, and Koffing on the blue team and Weezing, Voltorb and Graveler on Red.

Moves that automatically knock out the user but not the opponent. Healing Wish and Lunar Dance are supposed to heal a weak Pokemon in the team, but Arena, at least for some time, does not allow switching outside glitches or Roar. With Memento, it has the added effect of lowering the opponent's attack, unless it's last.

Any move that can cause freeze can completely turn the tide of battle.

A fair amount of Rock type moves have becomes memes in their own right.

Popularized by M4 in Twitch Plays Pokémon Emerald. A set it and forget it move that could win the entire match.

Ancientpower, Ominous Wind, and Silver Wind. Several fossil Pokemon carry it. It's a reliable rock move that may boost all stats in a rainbow colored aura.

Sandstorm. Deals consistent damage for five turns, which can be useful since it could be five turns of wasted moves due to the Mob or RNG.

The "Eternal Gladiator", Sweepyu is a Staryu that has gained fame for having an excellent moveset (Thunder, Hydro Pump, Psychic, and Recover), and many battles have been swung to a win solely because of it.
Master Goldeen

The Goldeen caught with a Master Ball in Pokemon Crystal.
Kakuna and Metapod

The twin cocoon gladiators. They only know Harden, but have also been known to pull off clutch wins thanks to stalling out a mon with prior damage, be it Burn, Poison or Leech Seed, and sometimes themselves K Oing enemies with Struggle after running out of Harden. In addition, using Harden itself turns them into impervious tanks.
Fearow

Perhaps the deadliest gladiator in the Arena.
Wigglytuff

Originally appearing in the Pokémon Mystery Dungeon: Explorers series as the head of the Wigglytuff Guild, he has made an appearance several times in Pokémon Stadium
Qwilfish "Lord Helix"

In FireRed, the Helix Fossil would have taken the form of a Qwilfish if revived. In Stadium, Qwilfish is known for his use of poisoning Sludge Bombs and evasion-enhancing Minimize.
Aipom

While not one of the strongest gladiators, Aipom is certainly one of the most annoying. He knows Double-Team and Agility, which potentially turns him into a super-speedy, super-hard-to-hit target.
Hoppip "Godppip"

A gladiator renowned for using tactics such as Leech Seed and Sleep Powder to slowly stall enemies to death.
Krabby "Murdercrab"

A brave Krabby, whose potential use of Guillotine as well as the powerful Crabhammer has more than earned himself the name "Murdercrab."
Entei

The Legendary Doge of Fire. Despite being relatively good in the official metagame, Entei is terrible in Stadium due to only having one good attack move.
Deoxys

The Legendary from space. Despite being decent enough in come, he's slowly turning into the new Entei of PBR, with some speculating he's Entei's son.
Vaporeon

The water type Eeveelution. Often is forced to fight Milotic during troll matches, much to the pain of the chat. (For a variety of reasons.)
Milotic

The drastic evolution of Feebas, Milotic is often forced to fight Vaporeon during troll matches, much to the pain of the chat. (For a variety of reasons.)
Favorable Machop

The Machop in PBR. It's known for its signature Seismic toss ability, making it a complement to aquatic creatures everywhere. Seems to constantly be on the announcer's mind.
Space Whale

Wailer and Wailord, and sometimes Magikarp and other water types.
Seel "Cancer"

A Seel in PBR with a hideously effective stall moveset.
Flychu

A Raichu from PBR that knows Fly, another fan favorite, often shows up as the last pokemon of a losing team. And just as often turns the match around on its own.
Charizard

The beloved evolved form of the fire starter from Gen 1. A strong contender, and while not the most successful by any stretch, she is arguably the most popular one, managing to always raise an insane amount of bets for her team and topping the popularity chart of stat trackers. Thanks to token matches, she has also fought in more matches than any other Pokémon.
Darkrai

Darkrai... TriHard, The Fallen One

Darkrai holds an unique spot among the battling roaster. Once upon a time, ''it was THE match winning Pokémon. Regardless of who he faced, or what team he was on, nothing outside of matchup specifically donated to counter him could beat him. The streamer, having realized his mistake, eventually Nerfed him... to the point of near unuseablity, putting him in the same group as Entei and Deoxys. There streamer eventually did rebalance him once again to make he more useable, but he is now infamous amongst the Mob, either for once being insanely broken or insanely terrible.

Consisting of among others, Flareon, as well as an Arcanine and a Magby (Dubbed 'the False Profit') in an automized version of Pokemon Stadium, where the mob bet for which team was going to win. This team did not.

Note: Due to characters appearing from many different series, please keep tropes limited to their performance on the stream.
Mario

Renowned for his memorable adventures in the Mushroom Kingdom and the extravagant events he's attended during the intervals between them, Mario Mario and his Brother, Luigi Mario have been protecting the Mushroom Kingdom for quite a while. His experiences with the Voices are limited at best, but he knew well enough to contact his Smash Bros. collegues to diffuse a specific unit used as its vessel.

From Star Fox, Fox is what many people consider to be Smash's Entei when it comes to betting. His win rate is terrible as a Lvl 9 CPU in Super Smash Bros. Wii U, despite being a viable character when played, especially Melee.
Marth

The Hero King of Altea, Marth is the Second-in-Command to Mario when it comes to the Smash Bros. division of the imfamous Select Sect, he is in charge of dispaching which agents to send out after facing off against a shape-shifting Smash Dummy when Deku first started his career in the Select Sect.

Returning from Melee, he's pretty much become a chew toy for all to abuse as they please. At least the fact that Sakurai recently allowed him back in the mansion via DLC at least allows him a roof over his head, but now it makes him closer to the group ignoring his existance.

The mascot of Gen IV, Lucario quickly became famous with the stream chat once Smash 4 started because of his high win rate, in no part thanks to his aura mechanics.
Ryu

The Main Hero of the Street Fighter Universe, Visiting Smash at a time where it is possible for a hivemind of friggin idiots to puppeteer your every move all at once probably wasn't the best idea... But alas, tis too late to change it, not even the recent passing of the big cheese of the very company he's hanging at's not a viable enough distraction!