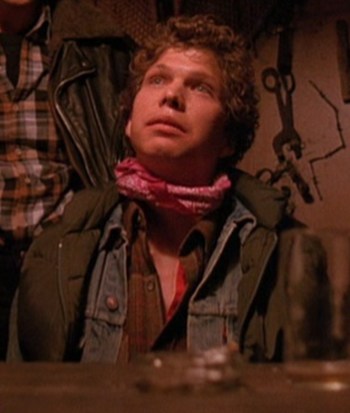 The youngest of the Renault brothers. He works as a drug runner with his brother Jacques and Leo. 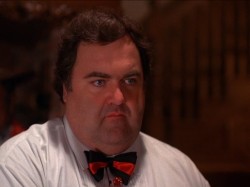 A pimp who works as the bartender at the Roadhouse. He was sexually involved with Laura Palmer and Leo's partner in drug dealing. 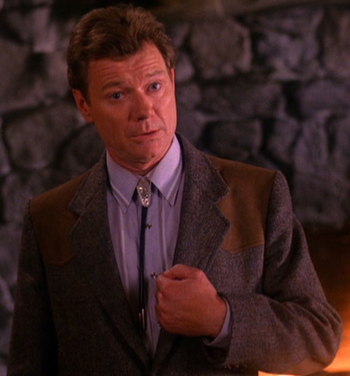 A criminal who comes to Twin Peaks to avenge his dead brothers. 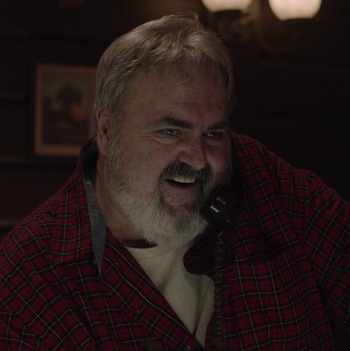 A member of the Renault family who debuts in The Return. His relation to the previous brothers is unknown but much like them he is a criminal. 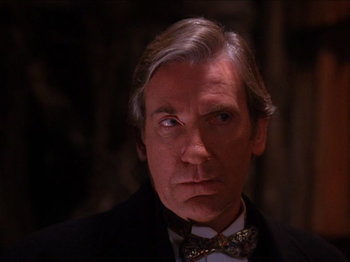 A powerful businessman who briefly menaces the town of Twin Peaks.

A mysterious asian businessman who arrives in Twin Peaks looking for Josie Packard. He's an agent of Mr. Eckhardt here to bring her back to him. 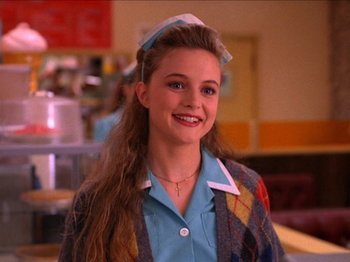 Played by: Heather Graham
"I've been out of circulation so long I've completely forgotten the social niceties. I mean, you ask me how I am, I'm not really supposed to say how I am; I'm supposed to say, 'I'm fine, thanks! How are you?'"

Norma's half-sister and a beautiful refugee from a convent who takes up residence in Twin Peaks. She starts work at the Double R Diner and soon becomes Cooper's love interest. 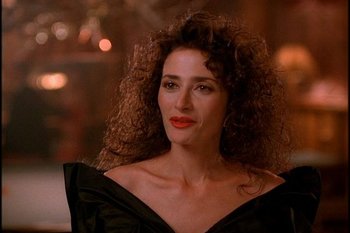 The madame for One Eyed Jacks and the mastermind behind Audrey Horne's kidnapping. 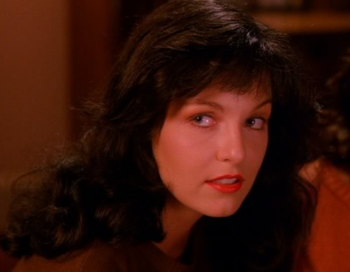 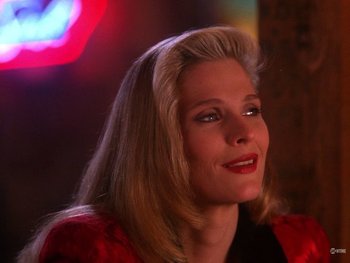 A woman who causes no end of trouble for James Hurley. 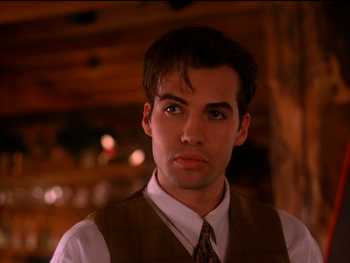 A love interest brought in for Audrey Horne when Cooper and her romance was shot down by Executive Meddling.

An underage prostitute and cocaine addict living in a trailer park in Deer Meadow, and the first victim of the same killer who also took Laura's life, with the crime happening one year prior. The investigation was inconclusive and resulted in the disappearance of agent Chester Desmond. It turns she was also connected to Laura in other, stranger ways. 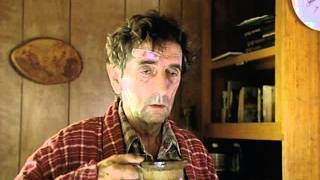 A local trailer park owner living outside Twin Peaks in Deer Meadow. He is involved in two murders in Fire Walk With Me and The Return but only as a bystander.

A young man assigned to watch a box in a secret compound in New York city.

A young woman with an ambiguous relationship with Sam Colby who often shows up with coffee at his place of work. 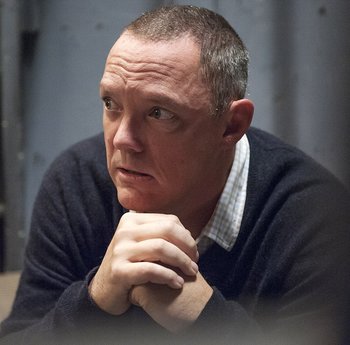 A high school principal in Buckhorn, South Dakota who was recently arrested on suspicion of murder and runs quite the interesting blog...

A former boxer and the owner of Lucky 7 Insurance. 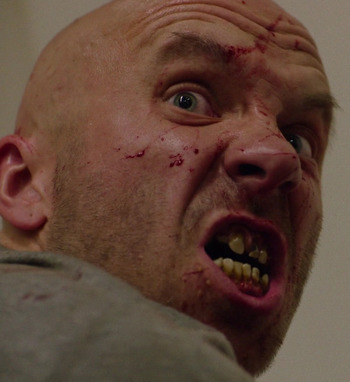 There's a new little person in the world of Twin Peaks, only instead of being an Ambiguously Evil resident of the Black Lodge, Ike is an ice pick wielding hitman who receives his next targets from Duncan Todd in Las Vegas. His latest target: one Dougie Jones.

The Mitchum Brothers (Rodney and Bradley) 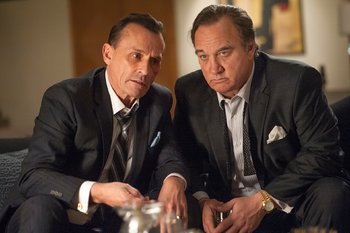 A pair of mobsters who own the casino in which Cooper manages to win 30 mega-jackpots on the slots. 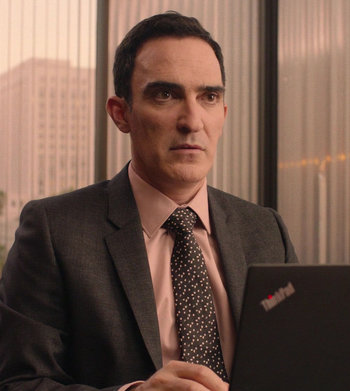 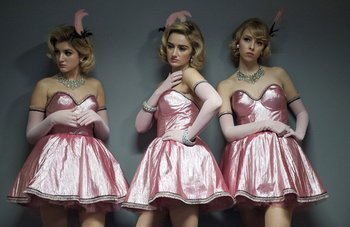 Mr. C and his Gang 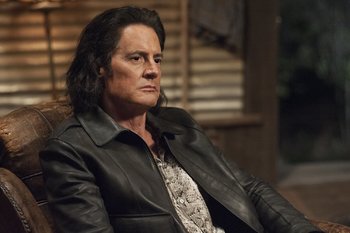 Played by: Kyle MacLachlan
"If there is one thing you should about me, Ray, it is that I don't 'need' anything. I want."

An evil doppelganger of Dale Cooper created when Agent Cooper entered the Black Lodge in the Season 2 finale. The Doppelganger chased after Cooper in the Lodge and returned to reality in Cooper's place while also serving as a vessel for BOB to possess. Sociopathic, perverted and garishly dressed, he's an Evil Counterpart to the morally pure Cooper in just about every sense. Spends the quarter century between Season 2 and 3 spreading violence and murder wherever he goes, collecting garmonbozia for BOB and himself. 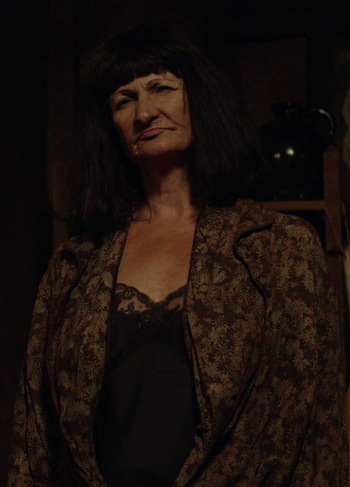 An old woman who heads a family of Hillbilly Horrors.
Darya and Ray Monroe 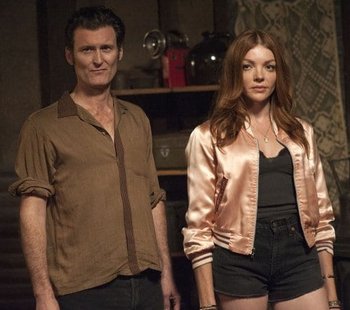 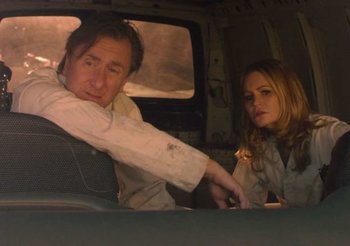 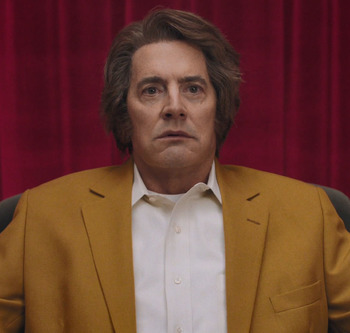 A sleazy insurance salesman with a strange similarity to Dale Cooper.
Janey-E Jones 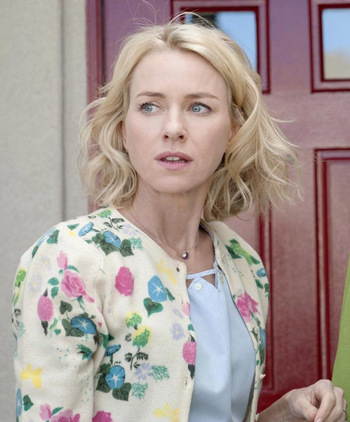 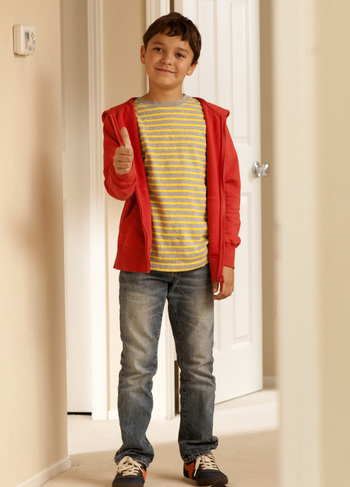 The son of Dougie and Janey-E Jones.

An Air Force Colonel at The Pentagon, tasked with covering up the whereabouts of Major Briggs, who seems to be found... well, everywhere... after his death.

An underling of Colonel Davis, also tasked with keeping Briggs' many deaths a secret.