The main and supporting characters from the animated series Tutenstein.

Tut
Voiced by: Jeannie Elias (first), Maryke Hendrikse (second), Donna Cherry (third and final)
Pharaoh Tutankhansetamun is one of the main protagonists in the series and in the movie. Tutankhensetamun (His nickname is Tutenstein (wordplay on Frankenstein), often shortened to Tut) is a 3,000 year old Egyptian mummy that lives in The International Museum of World History after having been awoken by Cleo and her cat Luxor. Tutankhensetamun died at the age of ten, before being reawakened about three thousand years later by Cleo. 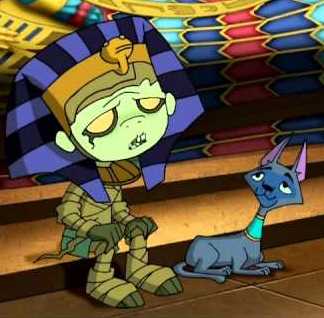 Tut as a mummy 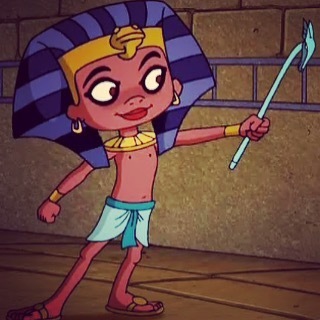 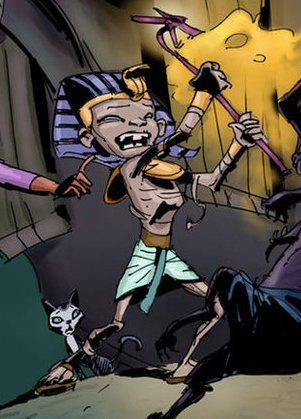 A 12-year-old girl who wants to become an Egyptologist, because her father, who is currently missing, is also one. After chasing her cat, Luxor, she accidentally brought Tut back to life. She tends to argue with Tut, complaining about his impulsiveness and outspokenness, but she always does it in a very rude and unceremonious way. Although she actually doesn't feel like it, she is often forced to help Tut set things right, but she would prefer Tut to stay nice and quiet in his sarcophagus all day, because she is afraid someone would find out about him being a living mummy. Most of the time it's very obvious that she doesn't really want to spend time with him, she would rather go skateboarding or hang out with her friend Natasha. Typically, she tries to stop Tutenstein doing the wrong thing but because of her impudence and incomplete explanations, he pays no attention to it. She always has her pocket computer, letting her gain instant access to facts about Egypt.

Cleo's pet cat who learns to speak after Tut is brought back to life. 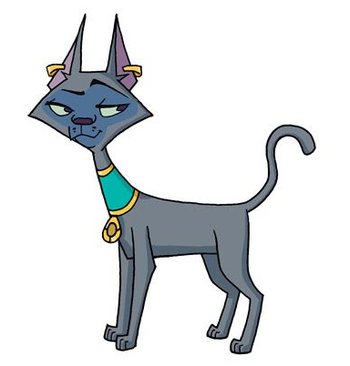 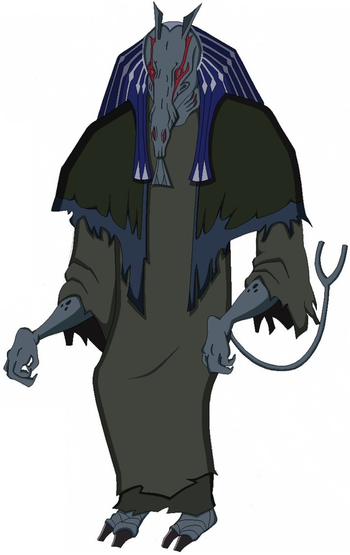 Set (Seth, Setesh, Sutekh, Setekh, Suty) is the Egyptian god of chaos, destruction and disorder, and the main antagonist of the series. For thousands of years, Set has been condemned to the darkest pit of the Egyptian underworld.
Voiced by: David Lodge
Sekhem and Khesef 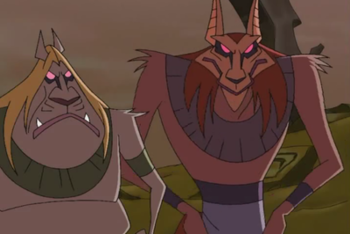 Two of the many demons who happen to work for Set, they are the most appearing in the series.
Advertisement:
Apep 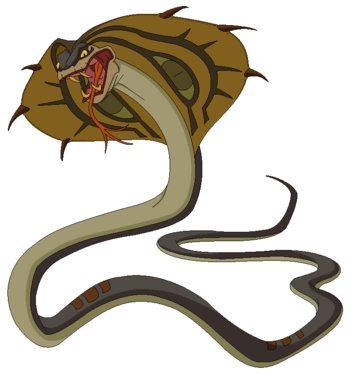 Apep (Apepi, Aapep, Apophis, Apopis) was a demon of the Egyptian underworld, in the form of a giant water snake. He was the enemy of the sun god, trying to stop him as he travelled on his barque through the underworld each night. He was so powerful that little could defeat him, and even then, he was back again the following evening to threaten Ra. He was a demon outside of ma'at, the opposite of order, a demon of darkness and chaos.
Ammut 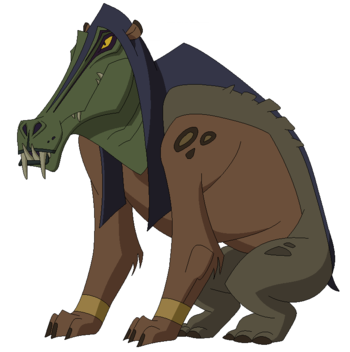 Ammut (Ammit, Ahemait) the Devourer is an Egyptian deity and demon that devours the hearts of the dead. When tested by the gods Thoth, Osiris and Anubis, the victim's heart is weighed against the feather of truth. If the heart is pure, the person is spared. If not, Ammut devours it, dooming the victim to the dark Underworld for all eternity.

Osiris (Wesir) is the Egyptian god of the afterlife, the underworld and rebirth. He's the one who judges humans after their death.
Isis

Isis (Aset) is the Egyptian goddess of magic, motherhood and wisdom. She's the wife of Osiris.
Advertisement:
Ra

Ra (Re) is the Egyptian god of the Sun. He's one of the most important figures in ancient Egyptian religion, since the Sun was sacred to them. Every night he would travel with boat through twelve gates (representing the twelve hours) so he could rise as in the day. However he had to battle the demonic serpent Apep, who sought to kill him and destroy all of existance.
Horus

Horus (Hor, Haru) is the Egyptian god of kingship and the sky. He's the gods' greatest and most revered warrior.
Anubis

Anubis (Anoup, Anpu, Inepu) is the Egyptian god of mummification, preparations and ceremonies for the dead. He works along with Thoth under Osiris to ensure order and bring balance to all the worlds.
Thoth

Thoth (Djehuty) is the Egyptian god of science, knowledge and writing. He works along with Anubis under Osiris to ensure order and bring balance to all the worlds.
Imhotep 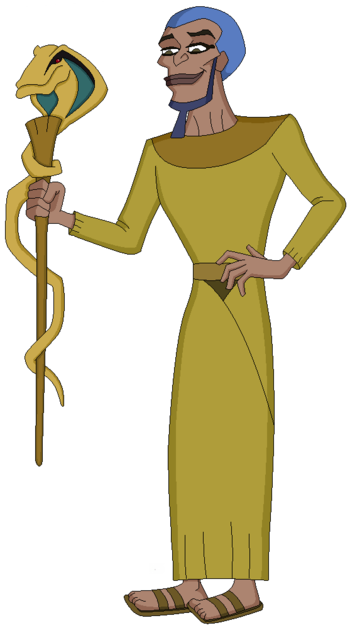 An Egyptian chancellor to the pharaoh Djoser, probable architect of the step pyramid, and high priest of the sun god Ra at Heliopolis. After his death, he was deified and praised alongside the other gods for his deeds.
Geb

The Egyptian god of earth.
Atum

Atum (Atoum) is the Egyptian god of creation and life, said to have made the first humans out of clay.
Sobek

Maat (Ma'at, Ma'et) is the Egyptian goddess of truth, balance, order, harmony, law, morality and justice. She's the one who weights the dead's hearts on her scales before deciding their fate.
Bastet

Bastet (Bast) is the Egyptian goddess of cleanliness, the household and protector of cats. Because of this she gets attracted to Luxor.
Sekhmet 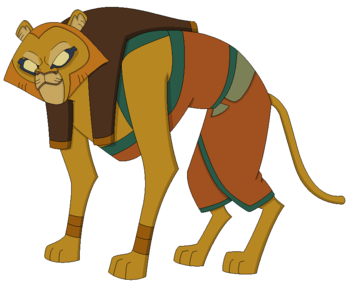 Sekhmet (Sakhmet) is the Egyptian goddess of battle, warfare and revenge. She is Hathor's wrathful alter ego.
Nut

The Egyptian goddess of the sky and stars.
Serket 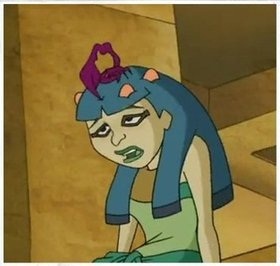 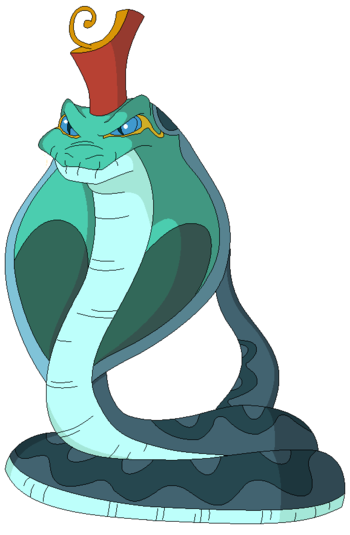 Wadjet (Wedjat, Wudjet, Uadjet, Udjo) is the Egyptian goddess of protection. Her symbol is used by royalty to guard them from evil both during their mortal life and in the afterlife.
Benu bird 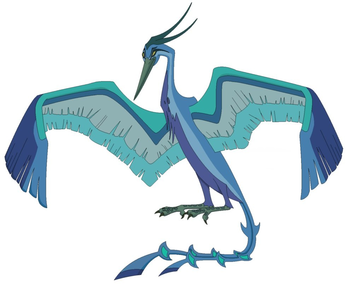 A sacred bird in ancient Egyptian mythology linked with the sun, creation, and rebirth.
Bes 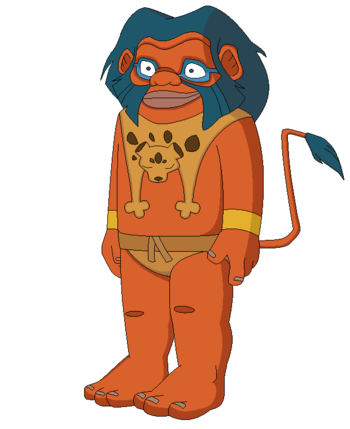 Bes (Bisu) is a minor ancient Egyptian deity worshipped as a protector of households, and in particular, of mothers, children and childbirth. He is later regarded as the defender of everything good and the enemy of all that is bad.

Cleo's ditzy best friend who has a bad habit of lying 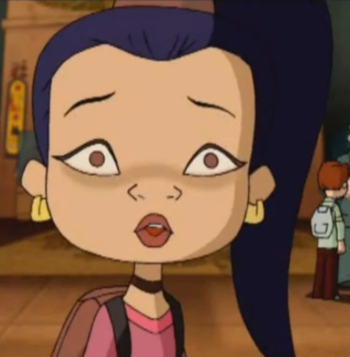