Trials of Mana Main Character Index
Heroes | Villains
This is the list of all heroes in Trials of Mana.
open/close all folders
In General 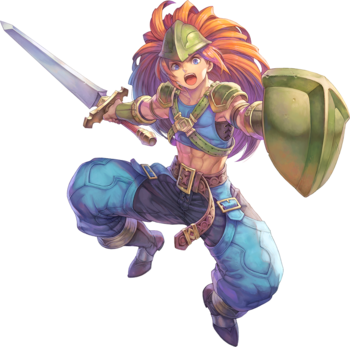 Young swordsman from the Kingdom of Valsena
Light Path: Knight — Paladin/Liege — Divine Hero
Dark Path: Gladiator — Duelist/Edelfrei — Berserker
"Just you wait, Crimson Wizard! I won't stop until I'm more than powerful enough to take you down. I will defeat you!"
Duran is a swordsman from Valsena. He really looks up to his deceased father, the Golden Knight Loki, who famously aided the Hero King Richard in his defeat of the Dragon Lord. He followed his father's footsteps into swordsmanship in the hope of making him proud.

Duran encounters the Crimson Wizard when he infiltrates the kingdom. Trying to stop him, Duran battles him and suffers a humiliating defeat. He heads to the Priest of Light to learn how he can become the strongest warrior, strong enough to defeat the crimson-clad magician.
Angela 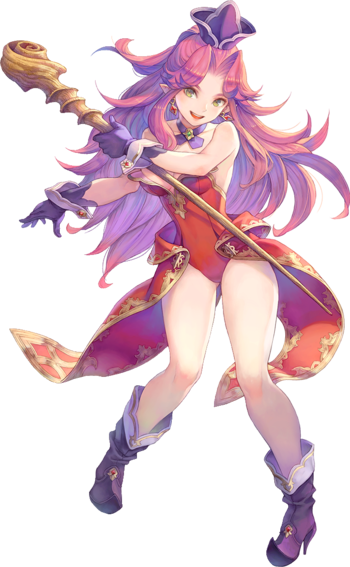 Rebellious princess of Altena, Kingdom of Magicians
Light Path: Sorceress — Grand Diviner/Archmage — Mystic Queen
Dark Path: Mysticist — Magus/Runemage — Spellbinder
"Wendel, huh? I don't know what awaits me there, but it's better than getting caught! I'll go. It can't be worse than here. If I learn how to handle my magic, maybe my mother will welcome me back... there's a chance, at least."
Angela is the princess of Altena and sole daughter of the True Queen. While she takes a lot after her mother in terms of appearance, she has never shown any sign of magical prowess and it frustrates her, though she tries to act like it doesn't concern her.

Her mother and the Crimson Wizard decide to unlock the Manastones and obtain the Sword of Mana, but requires a human sacrifice. They choose Angel as the sacrifice, but she manages to get away. Cast out of her home, Angela heads to the Priest of Light to find out why her mother is acting so strangely.
Kevin 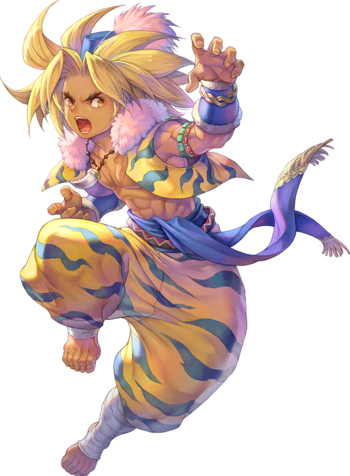 Son of the king of the Ferolian beastman
Light Path: Monk — Divine Fist/Warrior Monk — Beast King
Dark Path: Brawler — Fatal Fist/Enlightened — Annihilator
"Karl, wait for me. Priest in Wendel will tell me how to bring you back. Still my best friend, Karl... That coward is no father! He's why Mom left... Is she alive? I want.. to see her..."
Kevin is the son of the Beast King and prince of Ferolia. His mother was a regular human and disappeared around the time he was born. As his nature is more aligned with his gentle mother's, he associated less and less with his fellow beastmen and spend time with a wolf cub he names Karl.

Karl attacks Kevin out of nowhere and Kevin's beastman blood boils, turning him into a full-fledged beastman and senselessly beat Karl to death. Horrified at what he did and learning that the cub's death was caused by a plan of his father's, Kevin heads to the Priest of Light to ask for a way to revive Karl and take revenge on his father.
Charlotte 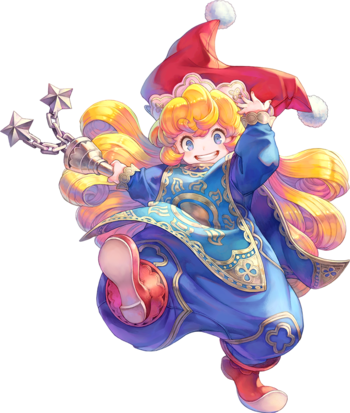 Half-elf young maiden of Holy City Wendel
Light Path: Priestess — High Cleric/Sage — High Priestess
Dark Path: Enchantress — Necromancer/Warlock — Chaosbringer
"A wight, huh? It could be dangewous. I can't wet Heath face it awone!"
Charlotte is the half-elven granddaughter of the Priest of Light and was raised by him in the Holy City of Wendel. She idolizes Heath, a fellow cleric, and is obsessively protective of him.

When she learns that he's sent onto a dangerous mission, she runs away from home and tries to follow Heath to keep him safe. Before she can achieve this, she sees Heath being kidnapped by the Goremand. Charlotte returns home and asks the Priest of Light how she can manage to save Heath.
Hawkeye 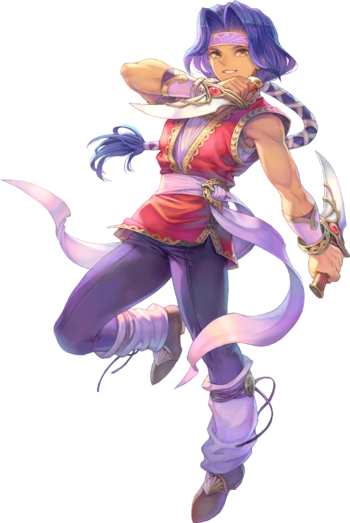 Noble thief of the Nevarlan thief guild
Light Path: Ranger — Nomad/Rogue — Wardenkeep
Dark Path: Ninja — Ninja Master/Nightblade — Vigilante
"Eagle... don't worry. I won't let anything happen to Jessica! I have to leave now, but... I will be back to avenge your death, dearest friend, and save your sister! I hope Jessica will stay safe until then..."
Hawkeye is a member of the Nevarl Thieves Guild, stealing from the rich and giving some of it to the poor, and he's quite happy at his job. Shortly after taking in a young woman named Isabella, the guildmaster Flamekhan decrees that the guild will stop its petty thievery and turn to raiding and invading, starting with Laurent.

When Hawkeye sees that Isabella has brainwashed the guildmaster, he tries to confront and stop her. Isabella — whose real name is Belladonna — uses magic to force Eagle to attack Hawkeye, then kills Eagle and frames Hawkeye for it. While imprisoned, Belladonna tells Hawkeye to better not talk, as doing so will cause Flamekhan's daughter, Jessica, to die from a curse that she has placed on her. Hawkeye gets saved by his cat friend Niccolo and rushes off to the Priest of Light to find out a way to lift the curse off of Jessica, and to get his revenge. 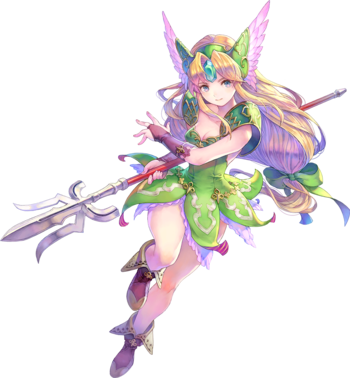 Highborn captain of Laurent's Amazon guard
Light Path: Valkyrie — Vanadis/Starlancer — Meteorite
Dark Path: Rune Maiden — Dragon Master/Fenrir Knight — Brynhildr
"Mother... I leave Father and the other fallen to your care. Elliot is my responsibility. I wear my mother's ribbon with pride. May it protect me on my journey."
Riesz is the princess of the Wind Kingdom of Laurent and leader of the Amazons. After her mother's death, she took on the responsibility as a fighter and leader to the kingdom's army and the role of a parent to her young brother, Elliot.

She goes searching for her little brother, only to find him in the castle's basement. Being tricked by Bill and Ben, Elliot turns the wind power off that protects the castle from enemies, allowing the Nevarl Thieves Guild to invade. Trying to find help, Riesz watches her father die and her kingdom taken over, with her little brother kidnapped, too. She heads to the Priest of Light to ask for help in reclaiming her kingdom and finding her brother.