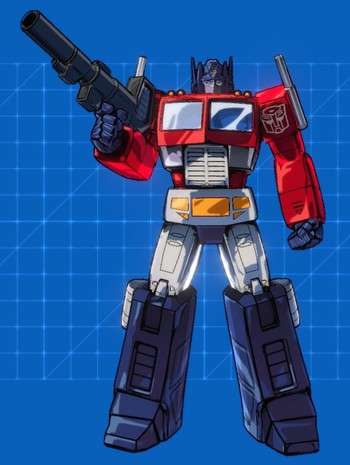 Leader of all Autobots, Optimus Prime leads his men in a crusade against the evil Decepticons. His Ultimate Ability is the "Ultimate Impact" which should be called the Punch of Kill Everything or Power Geyser, while his special move calls his trailer and slams everyone in its reach. Notably the only playable character who can utilize almost every weapon in the game. 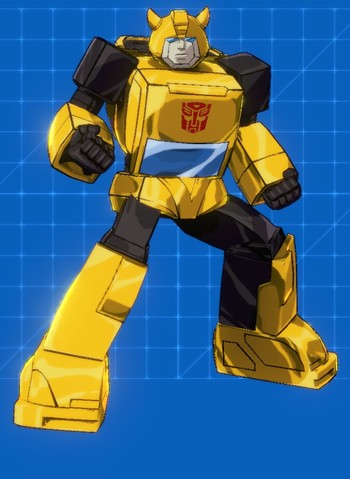 One of the smallest and weakest Autobots, but with a wisecracking personality to match. He doesn't deal a lot of damage, but he's a crafty fighter whose small stature gives him a quickness that's unmatched by the other Autobots. His Ultimate Ability is "Take Cover", tossing a CRAP ton of grenades and then jumping around, covering his "ears". His special move is a slide or dash which does Scratch Damage but allows him to duck under or hop over enemies, setting him up for a powerful double-handed hammer strike to the back. 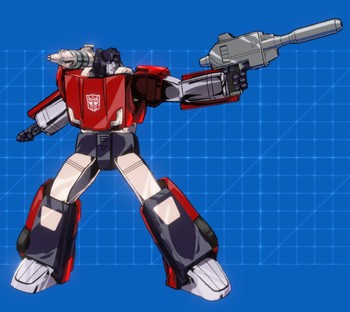 A bit of a jock, Sideswipe most craves a glorious fight to the finish as a test of his mettle. He doesn't play by the rules, and is not above using a few underhanded tactics. When it comes to strength, he falls in between the middle area, but dual-wields swords. His Ultimate Ability is "Launcher Barrage", where he showers his opponents with the missiles on his shoulder; while his special move is a dash (more of a Flash Step). 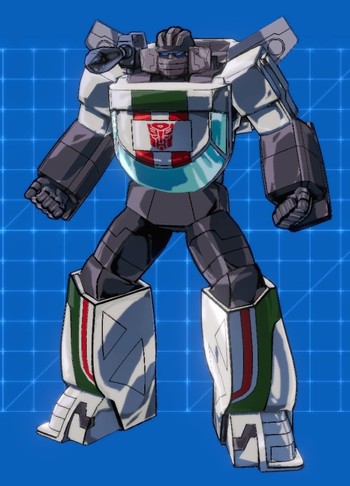 The Autobots resident scientist, Wheeljack isn't much different from his TV self, spouting technobabble and advising on matters of repairs and technology. He is also the one to handle the development of T.E.C.H. and can develop new tactics in his lab. Somehow. He isn't the strongest or fastest but he's good with a blaster and can build his way out of trouble. Literally. His Ultimate Ability is called "Astonishing!" where he constructs a device that can either freeze every enemy on screen and deal minor damage, or true to his G1 bio where his stuff is hazard to at least everyone around him, he throws the device and it explodes violently. 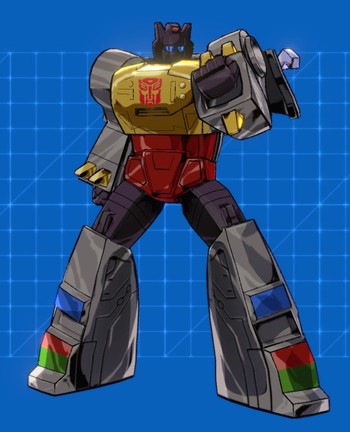 The Dinobot Commander and the biggest and slowest of the playable Autobots, Grimlock here follows the story that the High Moon Games didn't. Instead of a formerly intelligent military commander experimented on by Shockwave, here he was built by Wheeljack, who wanted to make the Dinobots like real dinosaurs and dumb as stumps. But Grimlock no care. He kick butt! His Ultimate Ability is "Grimlock Burn!" where he lets loose a massive fireball that explodes violently and his special move is the "T-Rex Toss", where he charges an enemy and if he gets ahold, he will plant them face first in the ground and run around, ending in a leaping slam.

"Like Defensor, we're here to help, too. You don't have to do this alone."
Voiced by: Jamieson Price 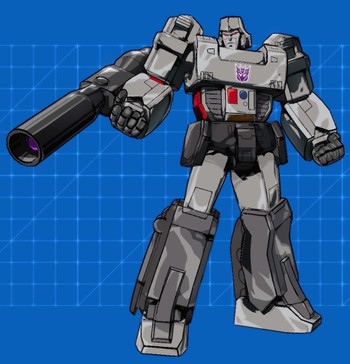 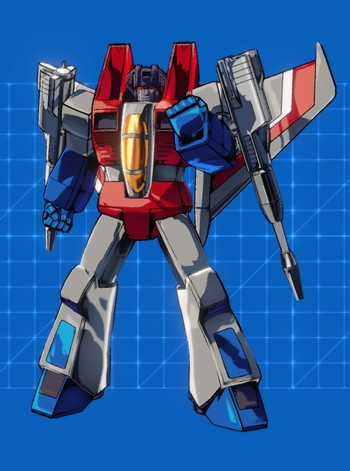 "I've long waited the day I can fight you all myself. Prove my worth to Megatron!"
Voiced by: Scott Whyte 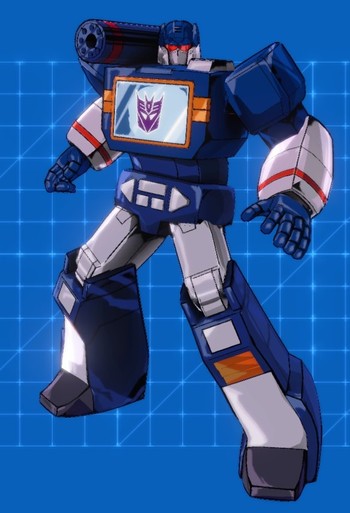 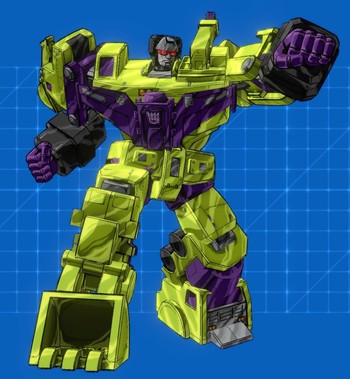 Prepare to be crushed, Autobot! 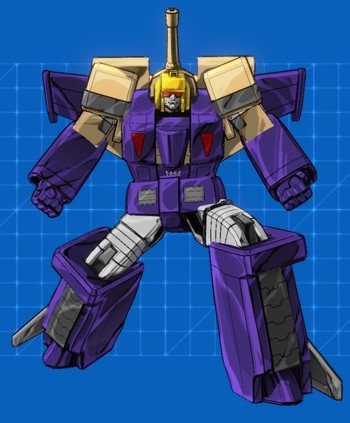 Not to be confused with Blitzcrank.

"I'm going feed you your own spark, Autobot!"
Voiced by: Dave Boat 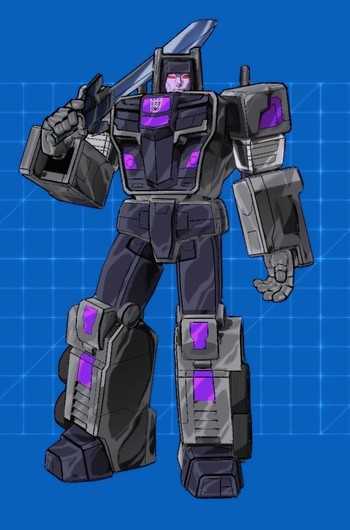 I'm King of the Road! 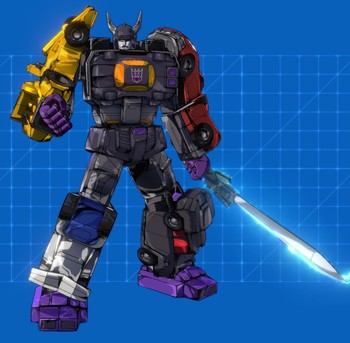 Not to be confused with Voltron.

"You beat Motormaster. Now see if you can beat ME!"
Voiced by: James Arnold Taylor 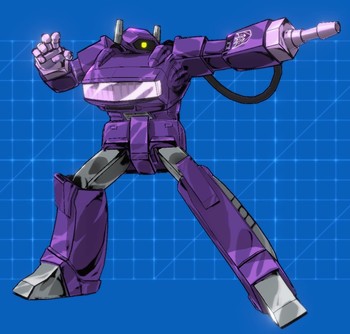 "We will control the Plasma Energy! And once we do, the Plasma Core will save Cybertron, not doom it."
Voiced by: Darryl Kurylo

"My loyalty only goes so far. Tampering with plasma energy? That's madness."
Voiced by: Andre Sogliuzzo

"Starscream failed. Guess that makes me the new leader of the Decepticons! ...Anyone else want this job?"
Voiced by: Scott Whyte

The former leader of the Autobots, until a darkness heavily implied to be Unicron corrupted him, and made him into a power-hungry tyrant who ends up betraying the Autobots and his own ideals.

An ancient deity dedicated to bringing about the end of everything through Cybertron's destruction. The Evil Counterpart and Evil Twin to Primus. The Proudstar made planetfall on his surface to restock which allowed him to corrupt them to varying degrees. When they left, Nova Prime pointed him in Primus' direction.