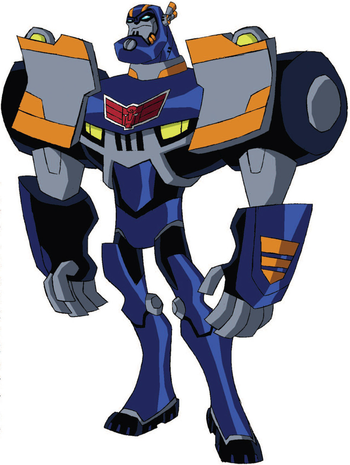 Voiced by: Townsend Coleman / Junichi Suwabe
"If I need a trash-can emptied or a floor mopped, I'll call on my buddy Optimus Prime. Or should I say "Maintenance Prime"?"

Sentinel Prime is, plain and simple, a jerkass. He is an egotistical, boisterous bot who uses his high position to issue orders and command high respect, especially towards Optimus (despite sharing the same rank). Years back, the two and Elita-1 were best friends until an incident on a foreign organic planet, during which Elita was separated from them and assumed dead. Their relationship has been strained since. 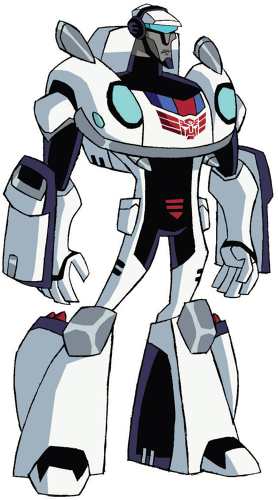 Voiced by: Phil LaMarr / Hideo Ishikawa
"Besides, any species that can come up with a sweet ride like this can't be all bad!"

Jazz is calm and collected and just plain cool. He is a graduate of the Cyber-Ninja Corps and later on, befriends fellow ninja Prowl. Jazz, like Prowl, has an interest in organic life. 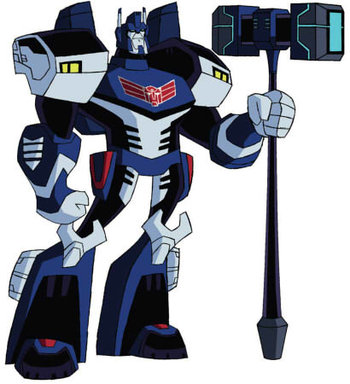 Voiced by: Jeff Bennett / Banjo Ginga
"We're at war, soldier. We do what we must."

Current leader of the Autobots, Ultra Magnus is a straightforward leader. He usually makes decisions that would benefit the Autobots no matter how unethical they may seem, though he has his soft spots, mainly concerning Optimus Prime, in whom he sees potential. He is tragically damaged by traitor Longarm Prime aka Shockwave, and according to the AllSpark Almanac, would have died in season four, making his current position nebulous.

Voiced by: John Moschitta (another G1 reprisal) / Takahiro Sakurai
"I'll warn them even if I have to run halfway across the galaxy to Cybertron to do it!"

Blurr is a member of the Autobot Elite Guard—specifically, a spy tasked with watching over Optimus and crew. With his lightning-fast speed (and speech), no one can keep him down ...except Shockwave. 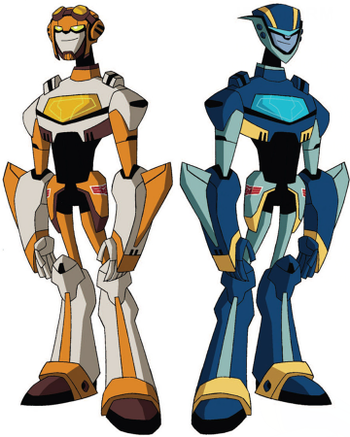 Twin brothers (if you're wondering how that works for robots, they come from a single spark that split in two) who became the first official flying Autobots after a risky experiment. They are lively and work together. 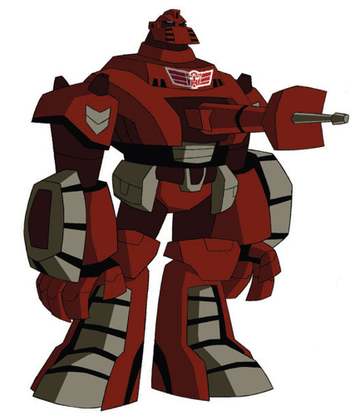 Voiced by: David Kaye / Atsushi Imaruoka
"Any Autobot who won't fight Decepticons is no better than a 'Con himself. We're at war."

An Elite Guard member who answered to Yoketron during the Great War. The loss of his master hit him hard, and he's had trouble finding an outlet for his anger since the end of the War. He's even been known to rough up prisoners when he's in a bad enough mood. He does manage to have a healthy relationship with Flareup, thanks to their mutual love of Stuff Blowing Up. 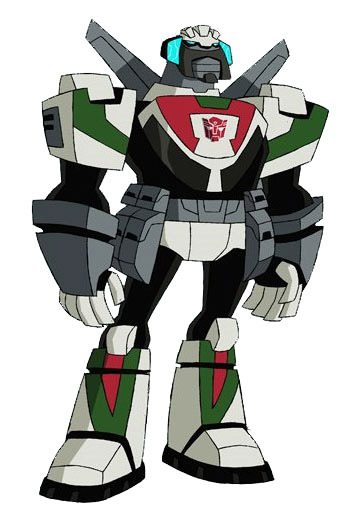 One of the Elite Guard's top scientists, he's responsible for creating Project: Omega, alongside his fellow scientist Perceptor. Notably more mechanically inclined than his cohort, he's modified his body several times over the years.

One of the Autobot's top scientists, he's responsible for co-creating Project: Omega alongside Wheeljack. Though having wiped his emotions to make room for more data, he's still unquestionably the most brilliant mind the Cybertronian Ministry of Science has to offer. 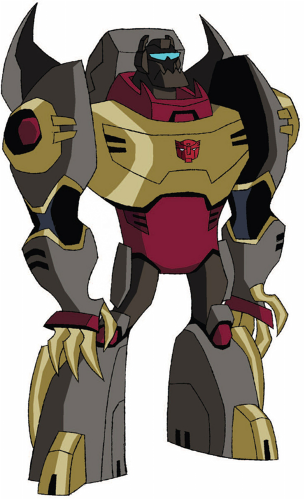 Grimlock is the leader of the Dinobots. He and the other Dinobots are simpleminded and aggressive creatures who started out as animatronic dinosaurs for a theme park, which Megatron upgraded with weapons in the hopes of using one of them as a new body. This plan went off the rails when they were brought to life in an accident involving the Key. They tend to get violent very fast the moment they sense hostility, and Prowl is the only one who can calm them down...usually. 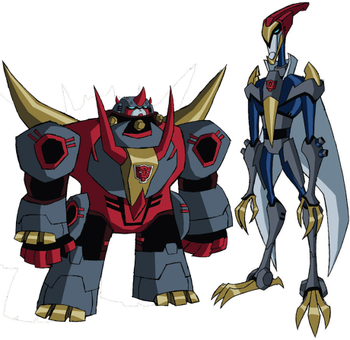 Voiced by: Susan Blu / Ayahi Takagaki
"Wipe my memory core. Ratchet, the access codes in my processor are crucial to the war effort. If Megatron gets them..."

Formerly a schoolteacher to young Autobots, Arcee became an intel courier during the Great War, tasked with carrying the important codes for Project: Omega, a valuable resource that the Decepticons wanted. This job came to an abrupt end when Ratchet accidentally wiped her memory during the Great War, causing her to suffer amnesia. She isn't seen until later on when Megatron and crew manage to get their hands on her and the code. Fortunately, Sari and Ratchet restore her memory afterwards. 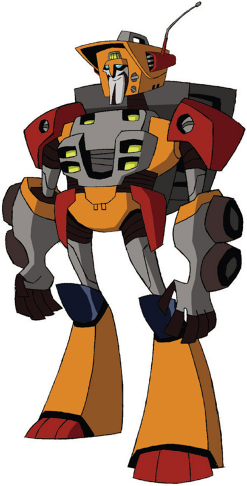 Voiced by: "Weird Al" Yankovic / Mitsuo Iwata
"Did someone say hero? I am Wreck-Gar! I am a hero!"

Wreck-Gar means well, he really does. When he first arrives, he has no idea who he is and what his purpose in life is. He spends the entire episode switching between hero and villain in an effort to find what his life goal is, though in a somewhat unintentional manner. Wreck-Gar literally does whatever he is told — good or bad — with hilarious results. He later becomes an Autobot and tries his darnedest to be the hero he would like to be. His head may not be in the right place, but his spark is. 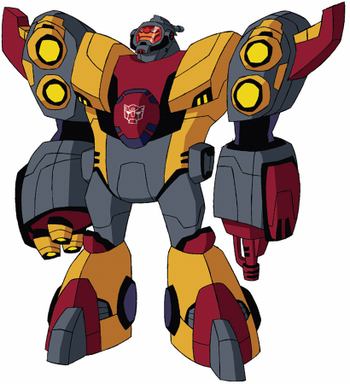 The current ship of Optimus Prime's crew, codename Orion, Omega Supreme was part of a huge project against the Decepticons during the Great War. He nearly lost his spark during the Final Battle and ended up comatose in ship form. Ratchet is his linked partner and constantly keeps him well maintained. 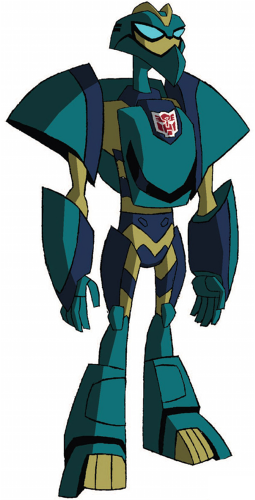 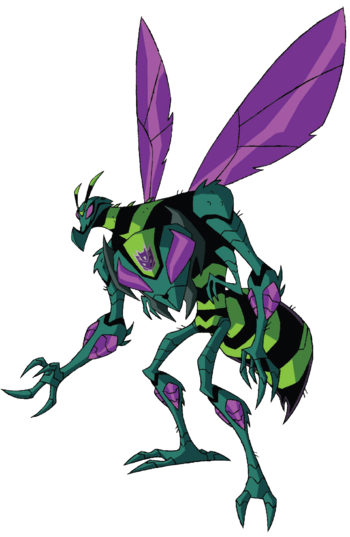 A former Autobot who worked alongside Bumblebee and Bulkhead in Autoboot Camp, Wasp is a cocky little guy who often got on the latters' nerves. After overhearing a Decepticon spy communicating with Megatron, Bumblebee accused Wasp of being said spy, leading to his imprisonment—thanks to some evidence planted by the real deal. Wasp eventually escapes (again with the help of the real spy) but he's not the bot he used to be. One thing is clear: He will get his revenge on Bumblebee! 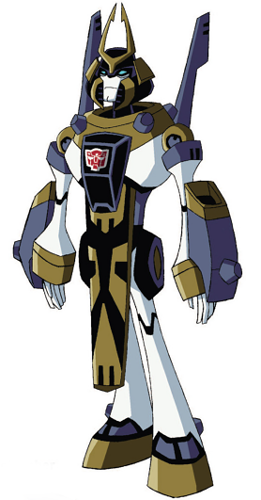 Voiced by: George Takei / Kinryu Arimoto
"You must not sacrifice a piece of the future to bring back the past."

Prowl's former master, Master Yoketron was the head of the Cyber-Ninja Corps. He trained a then-punkish Prowl in the ways of the ninja, humbling him in the process. He planned to make Prowl his successor after his pupil mastered the Processer-over-Matter technique, but he was brutally murdered by Lockdown while Prowl was on an optics quest. 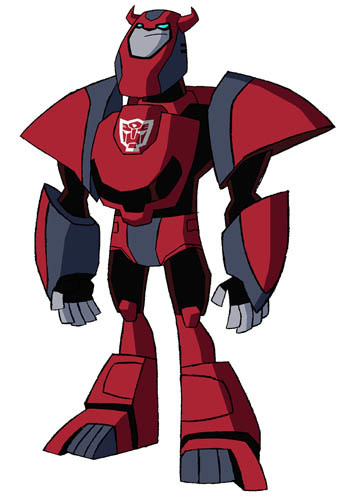 An officer in Autobot Intel, working directly under Longarm Prime and the Elite Guard. 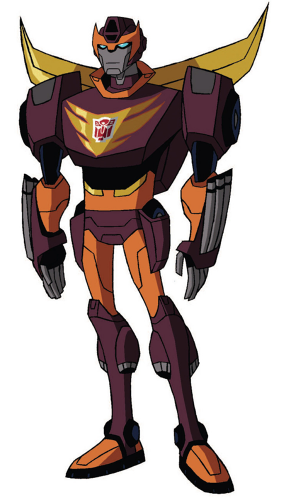 Voiced by: Judd Nelson / Hiroya Ishimaru
"You'll have to get past me first, Decepticreeps!"

Hot Rod, later Rodimus, earned the attention of the higher-ups before he even finished boot camp, and he was accepted into Autobot Academy long before any of his campmates. Everyone seems to agree he's destined for big things... if he survives his first encounter with the Decepticons, that is. 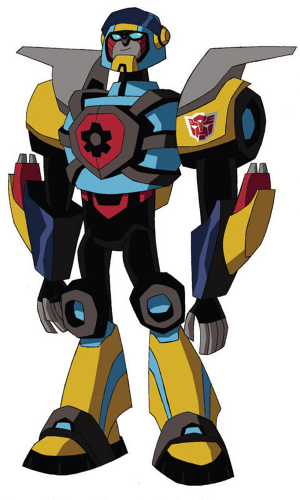 Voiced by: Bill Fagerbakke / Kōsuke Okano
"Is it hot in here, or is it just me?"

Team Athenia's own Bumblebee, Hot Shot's speed and recklessness lead to him spending more time in the medbay than any other member, much to Red Alert's exasperation. Why Rodimus thinks he has command potential, she can't imagine. 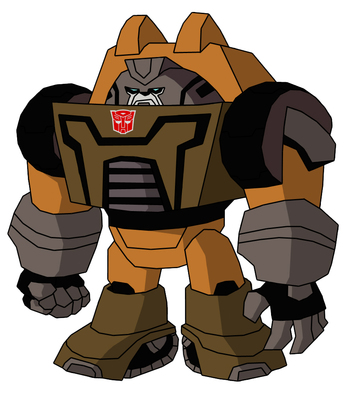 Might over microchips.
Voiced by: Corey Burton (grunts only) / Takashi Nagasako

Smaller than Bumblebee, stronger than Bulkhead. Do not cross.

R.A is less of a Combat Medic than Ratchet, but she lived through the height of the Great War and created a cure for Gold Plastic Syndrome along the way. Her teammates appreciate her dedication, although her bedside manner leaves something to be desired. 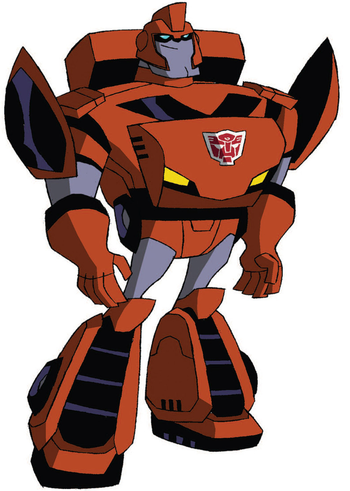 Voiced by: Corey Burton / Atsushi Imaruoka
"Hit me with everything you got, sir!"

Ironhide was protoformed in a rural prefecture on one of Cybertron's moons, and he was in the same boot camp squad as Bumblebee, Bulkhead, "Longarm", and Wasp. His pranks can get a little crude, but he's generally a decent "country" bot. 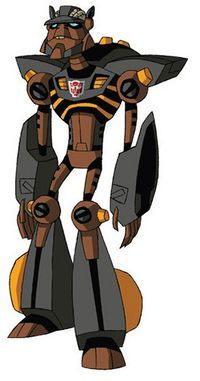 A street bot who is reputed as being able to get anything one can ask for. 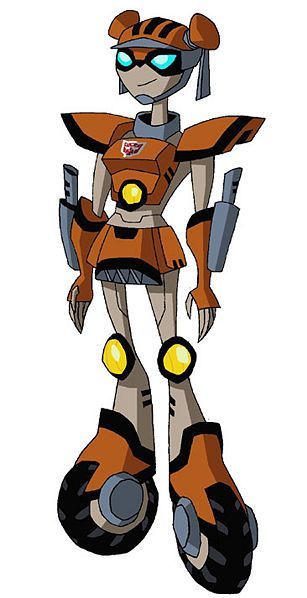 One of Macaddam's waitresses, who seeks to become an athlete. 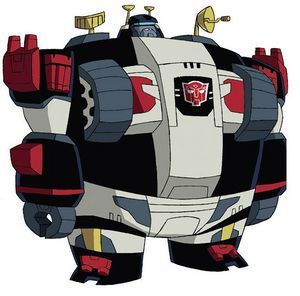 A giant Autobot who's renowned throughout Cybertron as a legendary sumo wrestler. 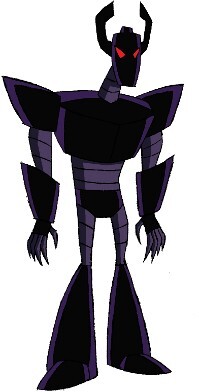 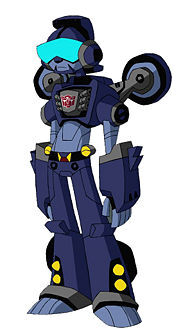 A simple Autobot who's also a major recreational drug user. 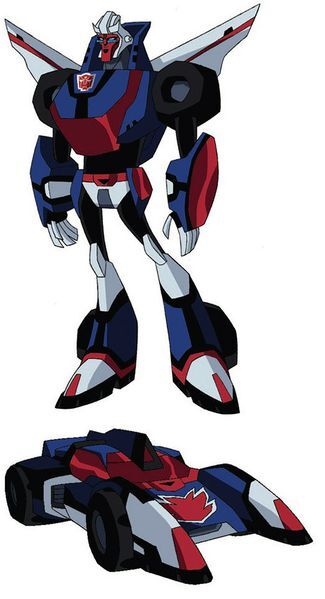 A highly noted Autobot fashionista, who's never one to keep company with those he considers below his impossibly high standards. 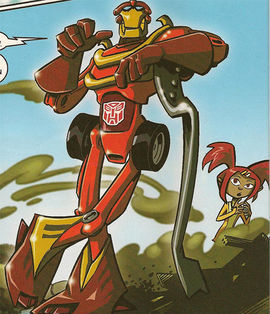 If your first thought was "Who?", this guy only appeared in the UK comics.
Cheetor 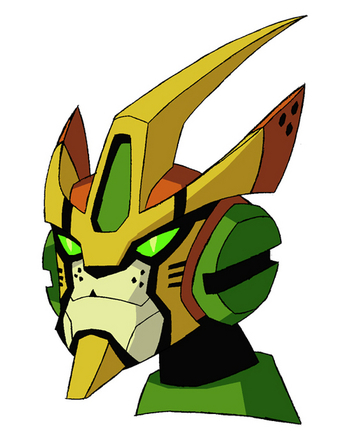 A glory-seeking street cop. After attempting to arrest two troublemakers despite them not having caused any trouble, he was reassigned from Transtech to Iacon Central to be partnered up with Sideswipe. 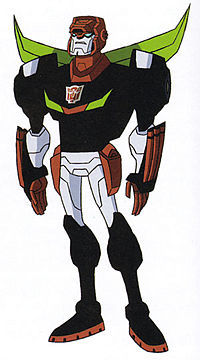 A senior investigator for the Cybertron Police Defense Command in Iacon Central.

One of Arcee's students and a classmate of Sari. She wants to be a detective. 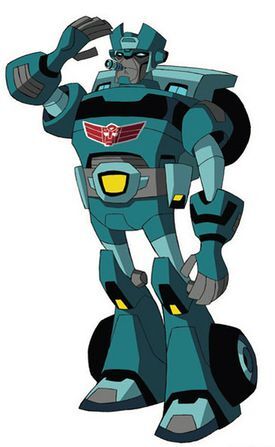 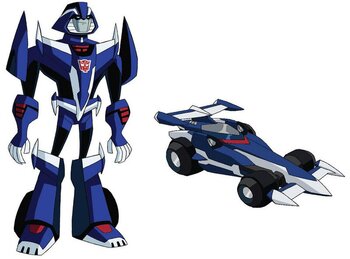 A more unusual Autobot who can turn invisible, he's always been on the bad side of the government due to protesting their heavy anti-Decepticon rhetoric.