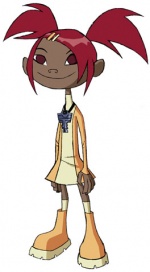 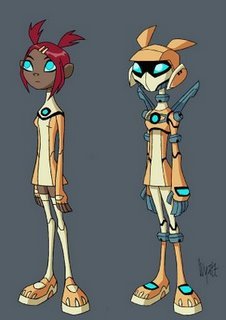 to see her after her upgrade.
Voiced by: Tara Strong / Satomi Akesaka
"Listen up, oil brain! My family needs your help, and you are going to help, get me?"

The young daughter of Issac Sumdac, Sari is what anyone her age is; precocious and spunky. She is immediately drawn to the Autobots (especially Bumblebee) and serves as their representative and educator of Planet Earth. When she comes in contact with the AllSpark, Sari's access key turned into a literal key that can fix damaged Autobots and allow her to manipulate nearly any type of machinery.

We later find out why the AllSpark chose her: Sari is really a Cybertronian protoform turned half-human, half-robot after Issac accidentally input his DNA into said protoform. Naturally, she doesn't take this well at first. Sari then gets a system upgrade that ages her up to a sixteen-year-old to make her more powerful. She continuously uses her skills in battle and later helps out during the final battle. 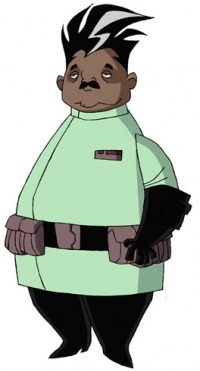 Voiced by: Tom Kenny / Takashi Nagasako
"I should be more careful when reverse-engineering alien technology."

Isaac Sumdac is the head of Sumdac Systems, the business at the heart of 22nd century Detroit, which relies heavily on his "tireless mechanical helpers". He managed to create these elusive robots by reverse-engineering technology from Megatron, whose head he discovered as a teenager. When Megatron reactivated, he convinced Isaac, who had no idea he was talking to a Decepticon, to keep him a secret from the Autobots. When they found out, they weren't pleased. Megatron later kidnapped Isaac to work on his space bridge, leaving Sari to take over Sumdac Systems briefly before Porter C. Powell kicked her out. He is eventually freed - just in time for Sari to learn the truth about herself.

He is the classic absent-minded professor, forgetting to eat in order to get his robotics in tune. He is well-meaning despite it and remains a loving father to Sari. 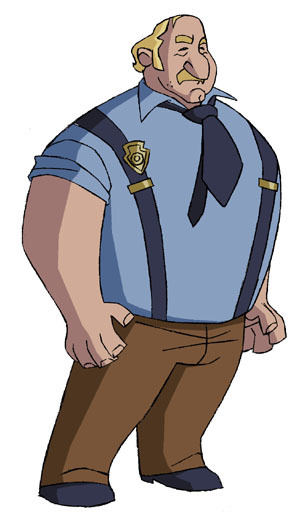 Voiced by: Jeff Bennett / Nobuo Tobita
"A technophobe is someone who fears technology. Does this! Look! Like! FEAR TO YOU?! *smashes a phone*"

The loud-mouthed captain of the Detroit Police Department (and master of yelling into megaphones), Fanzone dislike one thing and one thing only: machines. This hits him over the head when Detroit's heroes turns out to be giant robots. Still, for the sake of peace, he tries and learns to live with it, relying on them when he has to. Ironically, Fanzone is also the first human to visit Cybertron and most of the residents fear him because of his organic nature.

A shrewd business man who uses every dirty trick in the book to gain power and money. He works in Sumdac Systems, but briefly takes over it when Isaac "mysteriously disappears".

A silent mayor who lets his secretary do all the talking.

A family of in-jokes, the Witwickys are generally somewhere in the background, although they briefly join the main plot in "Garbage In, Garbage Out", during which Carly is giving birth and is unlucky enough to be picked up by Ratchet in ambulance mode. Spike and/or Carly work for Isaac, since Daniel is one of the few kids at Sari's birthday party. 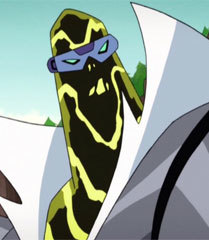 Voiced by: Peter Stormare / Fumihiko Tachiki
"Are you ready to feel the burn?"

An expert biologist, Prometheus Black used his talents to manufacture "biochemical makeovers", but lost his funding when a PR stunt involving Bumblebee and Colossus Rhodes went badly wrong. Angry that he has to compete with the likes of Sumdac and his machinery (which he hates), Prometheus vows vengeance. He gets it when he's accidentally turned into essentially walking acid. He's one of the few who can melt Cybertronians without even trying, making him a deadly foe.

Voiced by: Brian Posehn / Takehito Koyasu
"I ain't nobody's errand boy... unless the price is right."

Nino was once a common thief until he was given a speed suit secretly by Megatron, causing him to create wanton havoc until the suit aged him up. He is eventually restored to his youth by Slo-Mo, whom he falls for.

Voiced by: Jeff Bennett / Katsuyuki Konishi
"An Autobot! Verily the arrows of outrageous misfortune seek to pierce me to the quick - exeunt!"

A Robin Hood-ish figure who steals from the rich and gives to the poor, namely himself. The Angry Archer also has a habit of speaking in quasi-Shakespearean diction.

Voiced by: Kath Soucie / Megumi Toyoguchi
"Explosions aren't nice... EXCEPT WHEN THEY LOOK LIKE BEAUTIFUL RAINBOWS!"

A bratty "princess" whose goal in life is to destroy anything "boyish" so the world can be a happier, pinker place.

A young scientist who has created a robotic head that can take over any other living robots' body (he's kind of a control freak that way), controlling them under his will. Headmaster speaks in computer leet speak (retro leet speak, considering this is the 22nd century).

An evil Australian-accented man who also is the host of an illegal street-racing broadcast.

Voiced by: Tara Strong / Takako Honda
"I'm the leader of this syndicate. The head honcho, the big cheese, see?"

Speaking in 1930s moxie speak, Slo-Mo is a woman with the ability to slow down time, thanks to a watch embedded with an AllSpark fragment. She rounds up all the other human villains and forms the S.U.V (Society of Ultimate Villainy). She also has a thing for Nanosec.