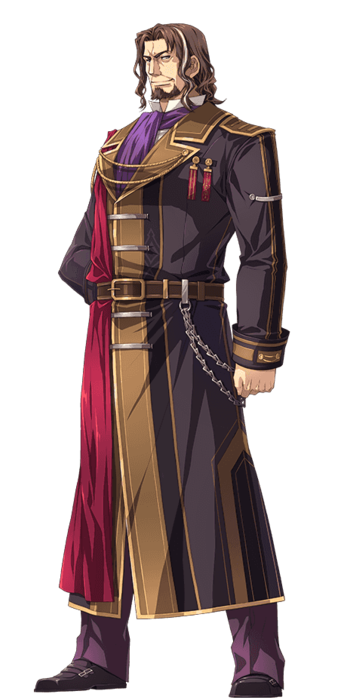 The leading figure in the movement to reform the Erebonian Empire's feudal power structure. Once a general in the Imperial army, it was thanks to his actions in hunting down those responsible for the Hamel Incident and brokering a ceasefire agreement between Erebonia and Liberl that resulted in the Hundred Days War coming to a close. As a reward for his actions, Emperor Eugent III granted him his now current title as High Chancellor of Erebonia. Becoming the first commoner in history to ever achieve the title.

First mentioned in Trails in the Sky: SC, he makes his formal debut Trails in the Sky: The 3rd and has since been a prominent figure in the series setting before finally taking center stage during the Cold Steel saga. Things are cut short however as the finale of Cold Steel I ends with Osborne being assassinated by Crow Armbrust, an event which kick-starts the Erebonian Civil War.

However, it's later revealed in Cold Steel II that Osborne somehow survived the attempt on his life through mysterious means. Appearing no worse for wear when he arrives in the aftermath of the Infernal Castle incident to congratulate his subordinates for a job well done. Afterwards he orders the Ironbloods to prepare for the annexation of Crossbell State. It's also during this time that he's revealed to be the biological father of Rean Schwarzer.