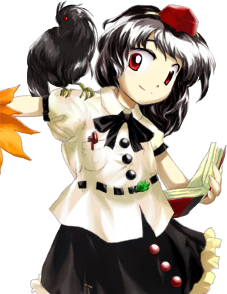 "Now then, time for a news story!"

One of the crow tengu who live up on Youkai Mountain, Aya runs the newspaper known as the Bunbunmaru. A shameless reporter notorious for her often salacious articles on various people, and is always looking for a new story to publicize. While she is strong, to the point that sometimes she accidentally wins fights when she was really just trying to take pictures for her newspaper, she prefers to work on her paper far more than fighting.

She technically first appears in Bohemian Archive in Japanese Red, which came out a few days before Phantasmagoria of Flower View, though she's put here as this is her first official appearance. This makes her the first character to be introduced in an artbook before showing up in game. 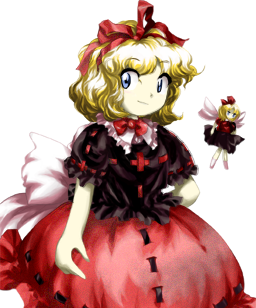 "You must be happy. You can die surrounded by poison."

A doll that has come to life as a youkai, she works hard for the emancipation of all dolls. Unfortunately, most dolls are unable to live as she can. She has the power to control various kinds of poison, allegedly due to the fact she was discarded on the Hill of the Nameless in the middle of a field of poisonous lily-of-the-valley flowers. 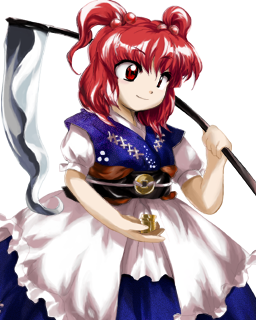 "I won't show mercy if you're going to interrupt my laid-back work."

A shinigami whose job it is to ferry the souls of the dead across the Sanzu River to await judgment, using her power to manipulate distance to shorten the boat trip when needed. However, she's an incorrigible slacker, which ends up leading to the events of Phantasmagoria of Flower Viewnote though the event was simply the 60-year cycle and not Komachi's fault; however, her slacking exacerbated the situation, if only a little when the amount of dead souls overwhelms her and begin accumulating in the world of the living. 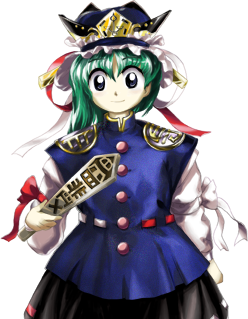 Highest Judge of The Court Of Paradise
Eiki Shiki, Yamaxanadu

"It looks like I still need to lecture you much more."

Komachi's boss and Gensokyo's resident judge of the dead. Unlike Komachi, she takes her work seriously, and is oftentimes lecturing her subordinate, as well as everyone else. She possesses the power to see everything in black and white, which leads her to be a bit moralistic, although she always means well. For reference, her given name is Eiki and her family name is Shiki, with the latter coming first in Japanese naming order, and Yamaxanadu is a job title.