"Did I learn that? Or remember it...?"
Voiced by: Jeff Schine (Male) and Shannon Torrence (Female)

The Last Castoff is simply that: the latest in a long line of bodies cast off by the Changing God after being created to house his consciousness and serve the needs of his current agenda. That so many of the Changing God's bodies still live might suggest something about how much (or how little) he values them, how readily he walks into danger and how readily he flees, and the sheer survivability of any given castoff.

Most if not all tropes which apply to the Last Castoff apply to the other castoffs as well, and in fact, being so new, considerably less to set them apart from others of their kind — not even so much as a name to call their own.

"It's time for some hard truths, child."

The Last Castoff's erstwhile sire, a man who has been around for thousands of years, hundreds of centuries. So named because he uses the numenera to craft new bodies for himself, transplanting his consciousness between them, constantly changing his appearance and rendering himself effectively immortal. 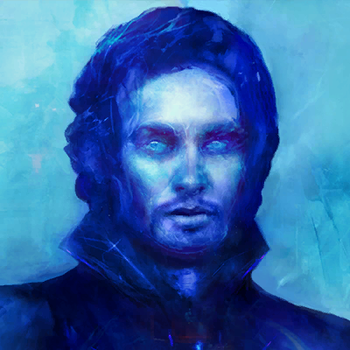 I'm you. A piece of you that broke off when the Sorrow attacked us as you fell.
"What else is in here? You mean apart from the cabaret acts, distilleries, and endless adventure just behind the next wrinkle in your mind...? Ha! And if you believe that..."

A fragment of the Last Castoff's mind and memories, and your ally and sounding board in the unfamiliar Labyrinth of your own mind.

"That thing that was here... that enormous shadow... that was just the smallest piece of it. You felt it. You saw it. It's our death."

Twisted, shadowy beings, capable of breaching any barrier whether of matter, energy, time, dimension, or even of the mind itself, in their relentless pursuit of the Changing God, shredding the minds and bodies he cast off wherever they can be found. Spoilers follow.

A Hardened Nano who Fights With His Demons 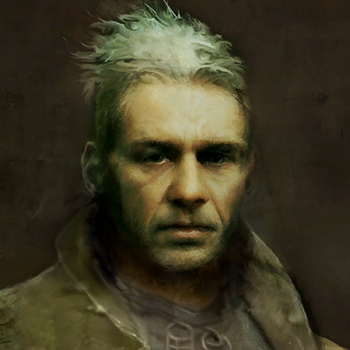 A former Aeon Priest on the outs with his order, now living as a scavenger and tinkerer in the city's Underbelly. He has some unpleasant history with the Changing God.

A Dimension-Shifting Nano who Pierces Realities 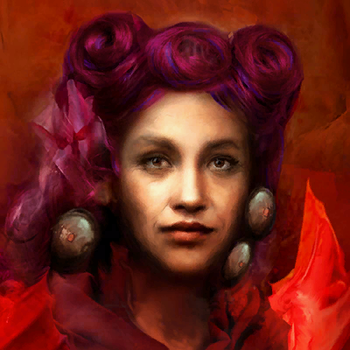 In this world, then.
"We are a part of each other, sisters across infinite realities. We share our experiences... and power."
Voiced by: Lani Minella

Another Aeon Priest, and unlike Aligern, still in good standing with the Order of Truth. She's constantly surrounded by otherworldly echoes of alternate versions of herself.

A Cagey Jack who Knows How To Take Care of Himself 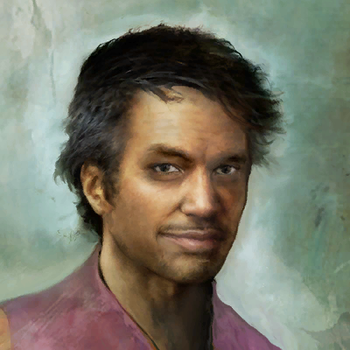 You look like someone who believes in justice...
"Unsure, are we? Wise lad. Most days, I wouldn't trust me either."
Voiced by: Sean Crisden

A roguish veteran soldier and retired mercenary who enlists the Last Castoff to help him save his friend Ris from the executioner's block. 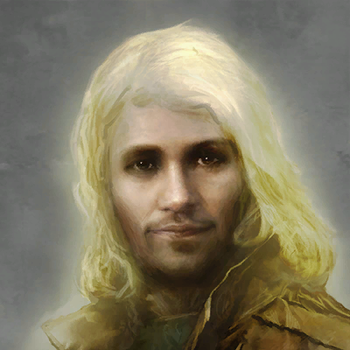 I am the very soul of action!
"Are we heading into a fight, or should I start one?"
Voiced by: Cayenne Chris Conroy

A cheerful and strong warrior, constantly bathed in an aura of glowing golden light, seeking adventure and excitement wherever it may be found.

A Lost Child who Shapes Gods 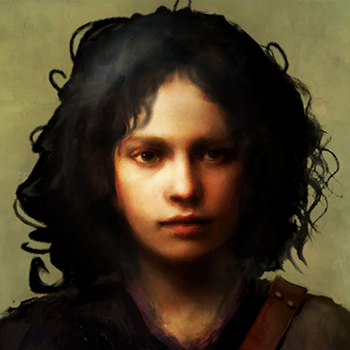 Trust and honesty are our bonds.
"Learning begets doing... or is it the other way?"
Voiced by: Callie Okun

A lost little girl, far from home and on the run from slavers, with only a stone — containing a god, or so she says — for company.

A Furtive Jack who Murders 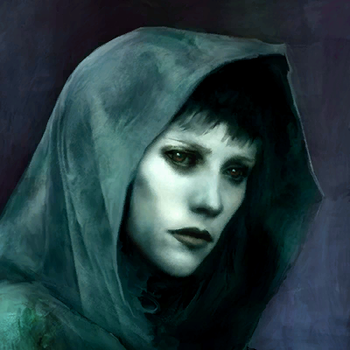 Like a whisper.
"We all use each other for our own ends, and someone always gets broken at the end of it. Even us."
Voiced by: Marissa Lenti

An assassin, a feared name in Sagus Cliffs' criminal underworld, and a fellow castoff. The first leg of the game begins with a quest to seek her out, in the hopes that she can educate the Last Castoff on the nature of their condition.

A Loyal Guardian who Flows with the Tides

A sentient numenera construct with a mysterious connection to the Tides and the Changing God.

A Brave Shaper who Walks Between

Rhin, all grown up. She returns to aid the Last Castoff in the final stage of your journey, provided you sent her home through the maw in Aen-Tozon's chest in Little Nihliesh.

"She serves us still."

A female Castoff who was the Changing God's closest collaborator until she rebelled against him. Although now deceased, many of the castoffs followed her and continue to fight in the Endless Battle.

"Show me someone without pain and I'll show you a corpse. And then I'll eat it."

The castoff founder of the Dendra O'Hur, an order of cannibals who eat the dead, absorbing their memories. He's been in hiding for centuries.

"You are most welcome here."

A castoff herself, Aadiris acts as the caretaker of the sanctuary of Miel Avest, a safe haven from the Sorrow and a neutral ground in the Endless Battle.

"No door opens without a toll, brother."

The castoff founder of Children of the Endless Gate, a murderous splinter sect of the Dendra O'Hur, reduced to a madman clad in rags waiting within the heart of the Gate itself.

The purple-clad city guards of Sagus Cliffs, upon turning sixteen (or the equivalent age of majority for their species), any person may walk into the Order of Truth and apply for citizenship. Upon doing so, they enter an ancient piece of the numenera — which drains a year of their life and uses it to build up an artificial humanoid out of gray sludge, which then serves the city in the new citizen's stead for one year.
The Sticha

A stichus (plural: sticha) is a kind of insect-like humanoid. Originally from another dimension, a few of them were transported into the Ninth World, and subsequently abandoned. Recently a community of sticha have begun tunneling through the Underbelly of Sagus Cliffs, bringing them into conflict with the inhabitants of the city.
The Fifth Eye

"The scars of a thousand mental battles slip away here. We can let our guards down. And so we do."

The burnt-out veterans of a psychic war, who now own, operate, and lend their name to a bar built inside what appears to be an ancient factory.

The following tropes apply to the psychic veterans of the Fifth Eye:

The following tropes apply to the patrons and other denizens of the bar:

"Meaning itself is sickness."

Intangible beings of pure, malevolent thought which entered the Ninth World via the interdimensional maws of the Bloom. The veterans of the Fifth Eye fought them off and sealed them away, but the Adversaries continue to seek a means of returning to Sagus Cliffs.

"I no longer fight with a blade. My weapon is time."

The last of the warlike Tabaht, an invading horde which once laid siege to Sagus Cliffs, nearly conquering the city thousands of years ago.

"You're a ... castoff. A spark of life leftover when your body was otherwise abandoned."

A strange, spectral figure, a woman who appears in the dreams of certain women in Sagus Cliffs, gradually changing their appearance and thoughts until they finally become her avatars in the real world, a process which has been occurring largely unnoticed in Sagus Cliffs for hundreds if not thousands of years.

"The pathways of the Bloom are strange, and not all its roads are pleasant."

A repulsive, vaguely spheroid blob of undulating flesh nearly as big as Sagus Cliffs by itself. Pockets in its interior are populated by humans, visitants, and abhumans, who find their own uses for the extradimensional portals which open when the Bloom is fed.

"So untrusting. So wise."

The ruler of the Bloom, and not the first of her name.

"Inquisitive minds are the sharpest minds. Though perhaps the dullest to speak with."

A fixer and numenera dealer of uncertain species who operates in the Bloom.

The Order of Truth

The Order of Truth

"Knowledge seekers, the learned who try to wrest secrets from the hearts of the prior worlds."

A library and laboratory space shared by seekers of knowledge and working scientists and inventors, the Order is a wealthy but exclusive organization which seeks to relearn what humanity has forgotten about the numenera.

The Cult of the Changing God

The Cult of the Changing God

"We seek to study you... so that we can become more like you."

The Changing God's true believers, who gather to study his works and offer their services to his castoffs.

"Death is a waste of history. We eat the dead that we might remember the lessons of time."

A cannibal cult, they believe that the strength and knowledge of those they devour will pass on to them. Worshipping their Great Queen Sar'Lavun, the Lady of Maggots, they roam the land in search of new prey, cloaked in rags and tatters and leaving only gnawed bones in their wake.

The Children of the Endless Gate

Death worshipers, some call them. They think of themselves as spirits trapped in flesh, and the horror of their cage pushes them to atrocity. They call themselves liberators and agents of freedom, and they leave no evidence of their passing but a tracery in blood.

"This world is the afterlife, and the graves here are our own."

A small cult who inhabit the Valley of Dead Heroes and the Necropolis, self-appointed caretakers who spend their days researching the pasts of those interred there. They believe the Ninth World is the afterlife, and seek a way to return to the real world memorialized by the Valley and its countless gravestones.

The Extremities of the Great Devourer

"To be devoured is to know salvation!"

Worshipers of the Bloom, an interdimensional parasite the size of a city and whose countless maws open to other planets, other times, and other dimensions. The Bloom's cultists seek to feed its hunger for things which may be physical and may be wholly conceptual, yet for the most part they remain beneath its notice.