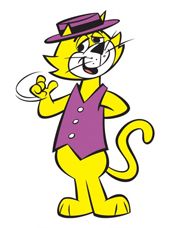 "What is there about me that makes people wanna give me things? It must be my lovable personality, what else?"
The indisputable leader of the gang. Top Cat, or T.C. to his close friends, is a charismatic swindler and con artist. In the Mexican dub, he was called Don Gato.
Benny the Ball
Voiced in English by: Maurice Gosfield, John Stephenson (Yogi's Ark Lark), Avery Schreiber (Top Cat and the Beverly Hills Cats)
Voiced in Latin American Spanish by: Jorge Arvizu (TV series, first movie and Yogi's Ark Lark ), Luis Alfonso Mendoza (Top Cat and the Beverly Hills Cats), Mauricio Perez (second movie)
Voiced in Japanese by: Ginzo Matsuo (video release) 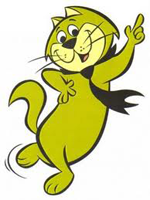 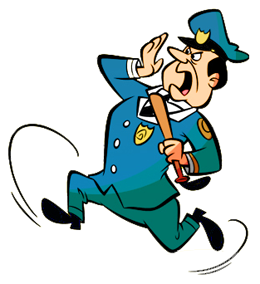 "All right, T.C., freeze! How many times have I told you to keep your hands off my phone?!"
Officer Charlie Dibble is the put upon policeman whose beat includes Top Cat’s alley. His goal in life is to run Top Cat and his gang in, but T.C. always manages to outsmart him. In the Mexican dub, he was named Oficial Carlitos Matute.
Advertisement: