Characters / Too Much Information (2005)

The character sheet for Too Much Information - the webcomic

Hair like that makes one wonder what anyone saw in him.

Much, much better
An 18 year old high school drop-out and computer nerd who gets kicked out of his mother's house in the very first comic for allegedly camping the quad rune in a Quake death match with his mother. He later ends up with more potential girlfriends of multiple species than any human could possibly handle. He worked for his uncle at Gibs Co. as the CTO, a kitchen knife importing business, he is now the CEO after Gary's resignation. Ace is a 0 on the Kinsey Scale.He was completely unaware of the significance of any of these things until he was informed of such, some time later, along with the accrual of several billion dollars’ worth of Orion funds in royalties, rewards and rental fees, managed by X.

A full blown anime otaku, video gamer and retired Air Force intelligence non-com with multiple language skills. She is owed many, many favors by upper brass, along with several alien species. Respectfully referred to as "Planet Killer Gibs" by the Orions. 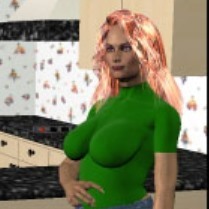 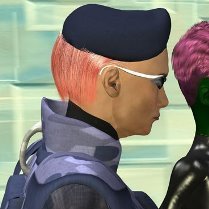 Mom, out of and in uniform
Gary

Uncle Gary
Gary's uncle, and part owner of Gibs Co. Father of Grace and Garfield. Resigned before his wife's misappropriation of company funds became public knowledge. He left her over the embezzlement. Not the sharpest knife in the drawer; but, he knows his weaknesses and lets those who know better, do what they need to do
Charity

Sweet Charity
She is Ace’s self-righteous prig of an aunt. Gina was forced to leave a very young Ace in her care during some of her deployments. Her overbearing attitude led to his rejection of organized religion. She later became inveigled into a "Nigerian missionary" internet scam, leading to her misappropriating large amounts of company funds, nearly bankrupting Gibs Co. Gary left her over this. Her children are Grace and Gabe.
Gabe

Ace's cousin, Grace's brother. A college drop-out. Not as sharp as Ace, but well above average.
Grace

Mom is the Devil on Luna's shoulder
Mother of Luna and wife of Larry. She isn't introduced until after she and Larry die in a car crash.
Larry

Daddy's the good one.
A former Air Force fighter pilot who lost a leg in a crash, trying to avoid landing a damaged plane in someone's living room. Fathered Ace with Gina his estranged girlfriend from the service, and Luna with his wife, Helene.The co-founder of Gibs Co. with Gary Gibs.
Luna

Ace's half sister by Larry's sperm and an egg supplied by another, Capt. Peach, implanted in Larry's wife Helene, as she was unable to have children. Has a twin sister, Sky, raised by her biological mother. Her human parents were killed in a car accident that left her badly banged up. Now lives with Ace. 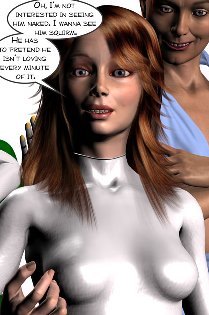 Such a loving little sister 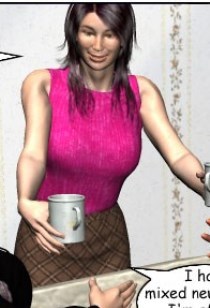 Looking good in pink chenille.
A gay transvestite who likes to tease straight boys. Owns the house shared with Ace and Rocky under the pretext that his mother owns it. While still gay, has finally admitted his love for Rocky.
Aoi 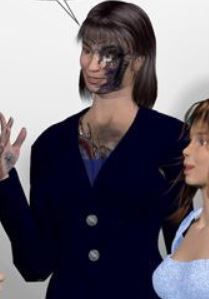 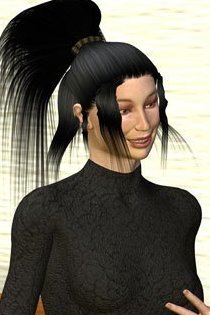 Yi Kim Yi
Aoi's niece, half Korean, half Japanese, a disinherited former Yakuza princess. Attempted to seduce Ace in order to get a green card. She is now an outer member of Ace's harem.
Akane 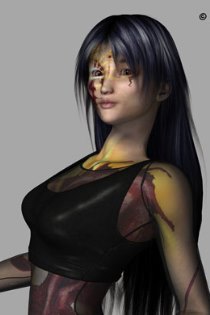 Ryoshi Akane
Aoi's niece, and Luna figures out that she is quite possibly Aoi's half-sister.
Barbi 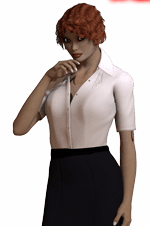 Grandma Rosa
60, the owner and CEO of Cartman's Stores, a business empire.
Maddie 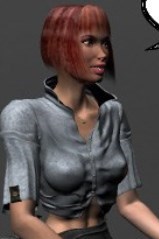 One of Ace's two girl friends
Heiress and fashion model turned business major, shares her apartment with her half sister, Maggie Rush, and a Tentacle Monster. Happily shares her boyfriend with Jaz Stockam.
Maggie

The child of an EldritchAbomination, Maddie discovered him in the caution taped closet of her new apartment 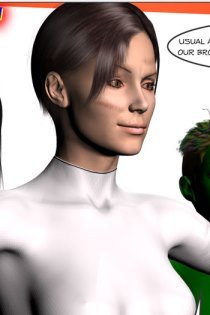 One of Ace's two girlfriends
Jaz is a Native American friend from Rocky's childhood, now a friend of Carly and Ace as well. After a disastrous night with a drunken Maddie, she ran off to Iraq to serve as a civilian medic. She became close to Ace while there, and even closer after she lost part of her leg as the result of a building bombing. She has no memory of rescuing two Marines she pulled from the bombed-out building before it collapsed on her.
Everest

The billionaire heiress of the Walker Hotel chain and tier member of Ace’s harem. Finally gave up on Ace in favor of Bruno.
Bruno

A longtime friend of Ace’s and former co-worker. Resigned rather than let his friend feel guilty about having to fire him.
Pixie

Rocky’s former girlfriend, Ace hired her to work in the call center where she proved to be so good that she was promoted to Sales Manager for Gibs Co. after Larry's death.
Sharron

Recently promoted to Detective. Slept with Ace, now a Middle Circle member of Ace’s harem. Has since moved on to one of the Stockam brothers.
Shirley

Ace's girlfriend in high school. They broke up just before he went to Korea. She didn't take it well when he told her not to wait. She showed up again some years later wanting to marry him. That didn't end well either.[[folder:Dr. Lane]]

Ace’s one time baby sitter, now a talented physician. Has treated Ace several times, and knows Jaz quite well, professionally. Could be considered a Outer Circle member of Ace’s harem. She has never expressed any interest to him, but made it clear to Jaz that either she or Maddie needs to do something soon. Older than Ace or the other girls, but still easy on the eyes.
Mei Mei

A distraught Korean woman who remembers Ace from the time of his mother’s deployment in Korea, where he earned quite a reputation, and bit of money, giving foot massages to the local women. Appeared to Ace as a ghost two years after she jumped to her death, trying to lure him into joining her in the afterlife.

Mostly, they take the form of a GreenSkinnedSpaceBabe, but they are closely enough related to terrestrial humans to allow interbreeding. Orions look very humanoid, as they are descended from Earth's Homo Denisova, some of whom were enslaved by the Dilmun's. Some centuries ago, they rebelled and drove most of the Dilmuns from the galaxy. They are, generally, petite and willowy, with fine bone structure because most of them grew-up and live in low gravity environments. Some, with significant Homo Sapiens ancestry, are stronger and appear much more Terran especially if they don't take chlorophyll supplements.
Peach 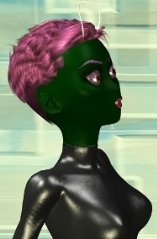 Princess Peach
Formerly 7th in line to inherit the title of Empress, now unwillingly finds herself first, and bearing the title Princess, with the rank of Fleet Admiral with a newly refitted flagship, the Rod Serling. Pair-bonded to her former Executive Officer, XO X Racer-Scion and the mother of Sky Peach-Scion. First met Ace when the Orions kidnapped him for the first time at age 8. Subsequently renewed acquaintances at age 16 due to an error in time differential by Peach’s cousin, Archivist Farrah Luthien-Scion.
X 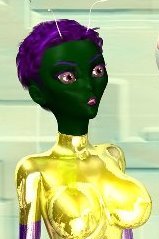 X
X is pair-bonded to Peach and Executive Officer of the Roddenberry. She is also the mother of Ororo X-Scion and five other daughters with Ace’s sperm and permission. She has never revealed how she managed to acquire the 16 year old boy’s sperm. The name XO X seems to be a bit of risqué humor in the Orions’ native language. Recently promoted to Captain of the Roddenberry, with the ascendance of Admiral Peach. First met Ace when he was kidnapped for the first time at age 8. Subsequently renewed acquaintances at age 16 due to an error in time differential by Peach’s cousin, Archivist Farrah Luthien-Scion.
Sky

Half human twin sister of Luna and, hence, a half/sister to Ace.The sperm came from Ace’s biological father, Larry, and the ova from Peach. Peach gave birth to Sky, while the other fertilized ovum was successfully implanted in Larry’s wife, Helene. No blood relation to Ace’s cousin Gabriel, Has two unnamed children of her own. 25th in line to inherit the crown of Empress Galadriel. Met her half-brother, Ace, when he was kidnapped by the Orions the second time, when he was 16.

Half human daughter of X and Ace, via artificial insemination and with Ace’s permission. X isn't revealing how she got the sperm "sample"
Farrah

Sister of Peach. Archivist on the star ship Gene Roddenberry due to her relationship to the Empress Galadriel. Apparently, not all that bright, and easily manipulated. Convicted of treason, with mitigating circumstances, after the events of Ace’s second adventure aboard the Gene Roddenberry.
Q'arn

A full sister to Peach, she speaks officially for the Empress and the Council when none of them are available.
Crew

Golem and machine intelligences who have become self-aware