The game's player characters. All of them are students at Morimiya Academy, and all barring Asuka and Mitsuki, get caught up incidents involving the otherworldly labyrinth affecting the town. At the start of Chapter 6, they have officially joined up together and created a club to disguise their efforts to solve the incidents.

As a whole
Kou Tokisaka

The main protagonist of Tokyo Xanadu and a second-year student at Morimiya Academy. He doesn't belong to any club, instead having multiple part-time jobs.

He is the character the player controls throughout the game, and is locked to the party for all story dungeons (barring eX+'s Side-Stories). His Soul Device is Raging Gear, a gauntlet equipped with a sword whip. 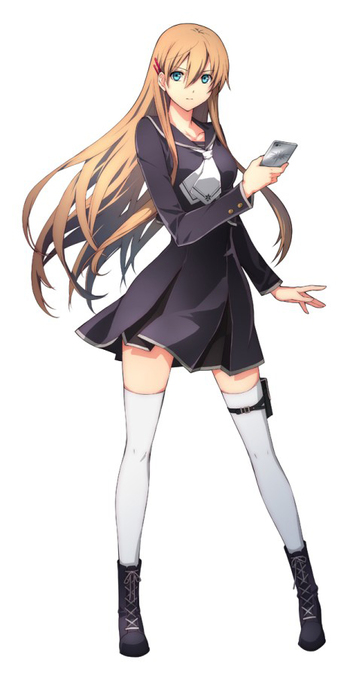 I'll say this one more time: don't get involved any further.

The heroine of Tokyo Xanadu, an overseas return student and the Class Representative of Kou's class. She secretly investigates incidents involving the other world.

She is available right from the first dungeon, but is unavailable in all of Chapter 5's story dungeons until the last one. Her Soul Device is Exerion Hearts, a sword.

With this "power", I'm sure I can be useful to my seniors!

A pure, serious first-year student and member of the karate club. She is originally from Kyushu, but decided to transfer to Tokyo for high school in order to broaden her knowledge and find her own place to train.

She becomes playable near the end of Chapter 2. Her Soul Device is Valiant Arm, a pair of fist-mounted gauntlets.

Are you sure you don't mean "genius?"

A first-year student and genius hacker and programmer who invented the popular phone app "God's App". He attends school the minimum hours required for graduation, making most students unaware of his existence.

He becomes playable near the end of Chapter 3. His Soul Device is Calvary Mace, a mallet, that also comes with a little floating sphere that follows him around.

That power...where did you get it?

A third-year Delinquent with a large build, who formerly led the famous delinquent group known as BLAZE. He stepped down as leader a year ago, but now somebody is going around causing trouble under its name.

He's known Mitsuki since before high school, and her apparent lack of weakness has given him some trouble dealing with her.

He becomes playable near the end of Chapter 4. His Soul Device is Vorpal Weapon, a large sword.

Then would you allow me to assist you, not as a member of Zodiac, but as Mitsuki Hokuto?

Third-year student and Morimiya Academy's Student Council President, as well as the likely successor to the Hokuto Group enterprise. Though kind and calm, she also has notable skills in negotiation, and has knowledge about the other world, as well as the Zodiac organization.

She's known Shio for 3 years, with her grandfather helping him both get a place to stay and even get into Morimiya Academy.

She becomes playable at around the midpoint of Chapter 5. Her Soul Device is Mystic Node, a staff.

I'll show you...just how powerful an idol's feelings are!
Click here to see her in her idol outfit.

Part of the 5-girl idol group "SPiKA," and student at Morimiya. She is a very talented singer who is competing for the center position with fellow founding members Haruna and Reika. She is quite hardworking when it comes to her idol life, but otherwise seems to be a normal highschool girl.

She might initially come across as somewhat condescending and a bit of a show-off, but she really is a surprisingly heartwarming and generous person. Upon joining the X.R.C, she is very open and caring to her fellow members.

She becomes playable near the end of Chapter 6, making her the only non-founding member of the club. Her Soul Device is Seraphim Layer, which takes the form of back-mounted wings.