Ghouls introduced or returning in the Tokyo Ghoul sequel series, :re.

Goat (ゴート, Gōto) is an organization founded by Ken Kaneki after the dismantling of Aogiri Tree and the third Cochlea breakout, which led to the death of the One-Eyed King, Kishou Arima. Carrying on the wishes of Eto and Arima, Goat intends to create a world where humans and ghouls can understand each other.

The members consist of the remainders of other organizations and groups like Squad Zero of the CCG, the White Suits and Blades of Aogiri Tree, the Tsukiyama family, the ghouls of the 6th Ward led by Banjou, :re/Anteiku and Cochlea escapees. 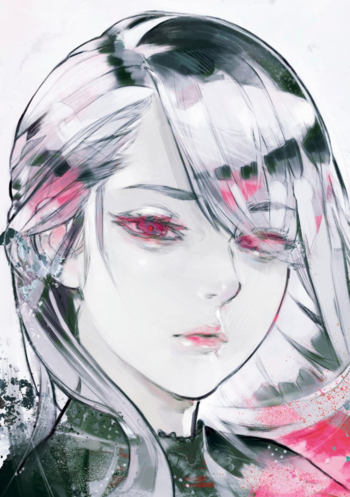 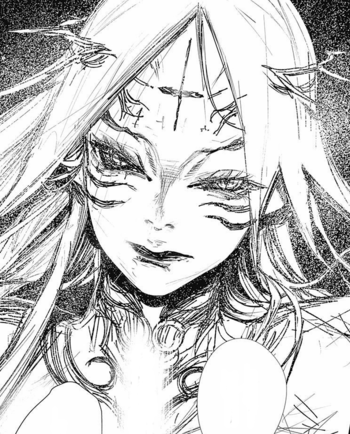 to see her Dragon form

A beautiful and mysterious Ghoul that was once known as the Binge Eater. Her kakuhou was transplanted into Kaneki, and Dr. Kanou used her as a donor in his experiments until she was retrieved by Anteiku. Though her current whereabouts are unknown, her past holds the key to many secrets.

The former leader of the 6th Ward, a powerful Ghoul trained in the martial arts. He was freed from Cochlea during Aogiri's raid and spent time with them, but seems to have broken ties with them in the passing years. He was once pursued by Kaneki for his connection to Rize, and has become a target of V.

See his entry under Crown, below. 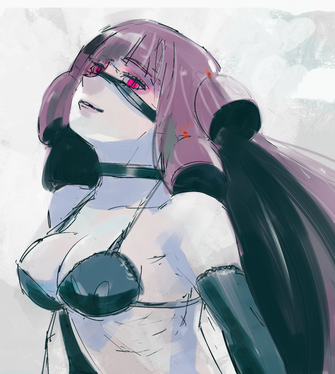 "I just wanted to be beautiful."

A female Ghoul with a distinctly violent tendency towards male victims, under investigation by the combined efforts of the Suzuya Squad and the Quinx. She is part of a larger human trafficking ring, and obtains "ingredients" for her high-class clients. 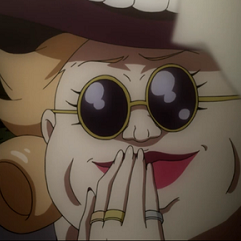 An influential Ghoul involved in the underground society of Ghoul Restaurants and human trafficking. Though considered a major target, she has eluded numerous extermination attempts, and uses Nutcracker to obtain "ingredients" for her organization. She is the Ghoul that raised Juuzou Suzuya, using him as a Scrapper and her personal plaything. 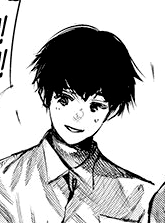 The father of Touka and Ayato. He was a peaceful and kind Ghoul, eager to live in harmony with his human neighbors. He was eventually hunted down by the CCG after developing a Kakuja, and used to create experimental armor. 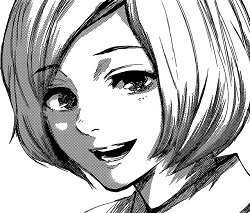 Yomo's older sister, and the mother of Touka and Ayato. She was killed by Arima while her children were still young.
Advertisement:

Aogiri in General
The militant Ghoul organization has grown considerably in power over the last two years, becoming so powerful that the government had no choice but to disclose their existence to the public. The Quinx Project is an effort to combat them, through creating superior Investigators. 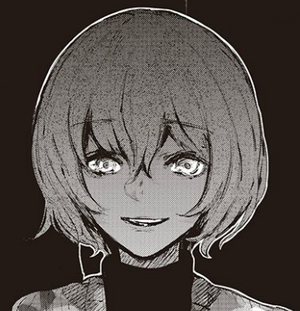 "I shall become your God."

The Half-Human Hybrid daughter of Yoshimura, known as the One-Eyed Owl and true leader of Aogiri. She continues to hide her true identity, while commanding the organization from the guise of a lower-ranked member.

Her human identity is Sen Takatsuki, a famous horror novelist. 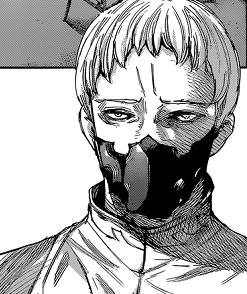 The second-in-command of Aogiri, often serving as their acting commander. 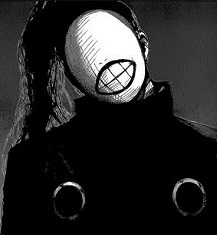 A tall and silent Ghoul, in service of Aogiri's leader. 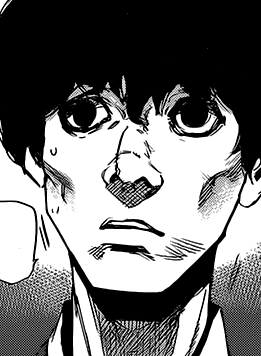 "My desires are... unsatisfied."

A mysterious Ghoul, currently being investigated by CCG. His unusual feeding pattern involves leaving behind his victims' heads and legs, marking him as a highly unusual and disturbed Ghoul. 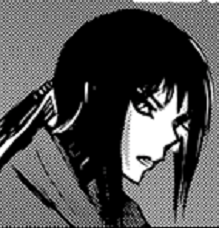 A subordinate of Tatara's, and the adopted younger sister of the late Bin Brothers. Known as "The Quinque Hunter" due to her proficiency with using the stolen Quinque of Investigators. 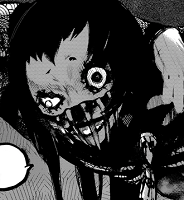 A ghoul originally named "Rio", raised by his older brother and kept hidden because of his abilities. After his brother's death, he went on a rampage and killed numerous Investigators before being captured. During Aogiri's raid on Cochlea, he escaped and joined the organization. He was among the team hired by Kanae to kill the Quinx, and later reunited with fellow Cochlea escapee Roma.

A Ghoul Investigator seeming killed in action, and taken prisoner by Aogiri. He was used in Dr. Kanou's experiments to replicate the Quinx Surgery, and acts as the doctor's bodyguard during the Rushima operation.

The Tsukiyama Family in General 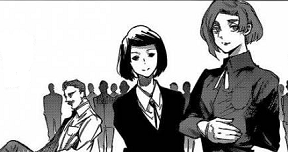 An exceptionally powerful and wealthy family of Ghouls, with influence in both worlds. Their business conglomerate has holdings across industries, granting them considerable financial and political power in both domestic and international affairs. This has also granted them considerable influence within Ghoul society, with a large and devoted power base. 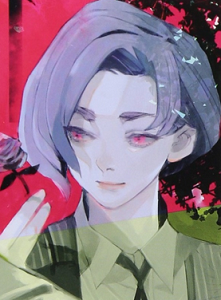 "Together to the end of the world...Glorreich (Master Shuu)".
click here 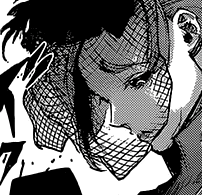 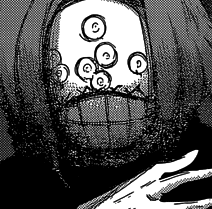 to see his second mask

A young, eccentric Ghoul who has an unhealthy devotion to his cousin, Shuu. He originally worked tirelessly to find some way to save his master from his deep depression, but has been slowly consumed by feelings of jealousy towards Sasaki. 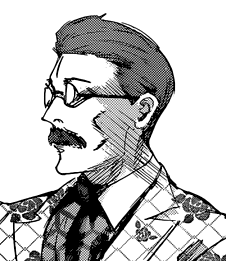 A wealthy and highly-eccentric Ghoul, well-known within Ghoul society for his extravagance. He is the father of Shuu Tsukiyama, the once-infamous Gourmet. 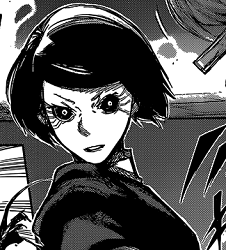 "From the start, this life was yours. Please do not waste it."

A serious and efficient woman that has served the Tsukiyama family for a long time. She has spent her life watching over her young master, as both a nanny and a teacher at his school. Officially, she is the General Manager of the Tsukiyama Group. 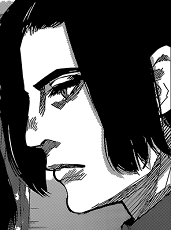 A servant of the Tsukiyama household, often working alongside Matsumae. 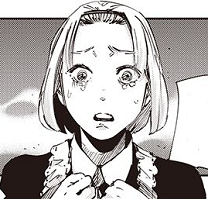 A pair of servants involved in a romantic relationship.

The Pierrot in General 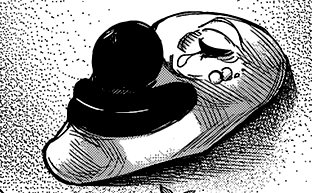 A mysterious group of Ghoul pranksters, heavily involved in the tragedy of the original series. 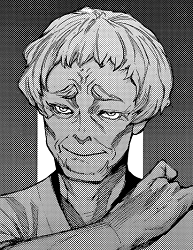 A powerful Ghoul imprisoned by CCG, infamous for having used an orphanage as a cover for eating children. Donato Porpora is a valuable informant and confidant to Sasaki, offering him advice on cases as well as listening to his problems. Though long imprisoned, he seems to know many secrets and advises Sasaki to seek out his past.

During the attack on Cochlea, he is freed by his fellow Clowns. 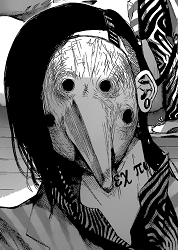 A mask-maker and former associate of Anteiku, revealed to not be what he seems. As a member of the Pierrot, he takes the lead during their participation at the Auction. 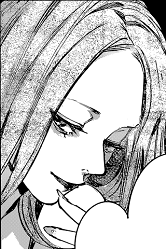 Uta and Yomo's longtime friend, an information broker that runs a bar. She typically sticks to the shadows, and uses others to gather information for her extensive network. 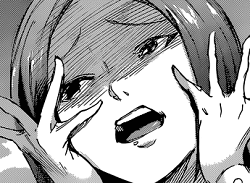 "I'm a spectator. The kind that jeers from the stands. A watcher on high. I ruin fights I don't enjoy."

A former waitress at Anteiku, and escapee from Cochlea. She remains obsessed with Kaneki, and wants to destroy his life again for her own amusement.

A flamboyant Camp Gay with a taste for the disturbing, once allied with Aogiri. He expresses misgivings over Roma's plans for Sasaki, but seems to have his own intentions. 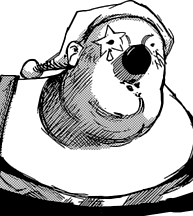 A heavy-set and rather slow Ghoul, joining Uta and Roma at the Auction. 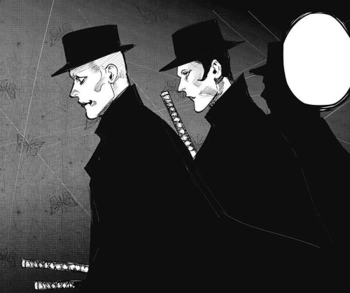 The secret aides of the Washuu family, whose details are top-secret and known by few... A mysterious armed guard that is said to appear when the CCG falls into times of great distress...

A mysterious organization that influences events from the shadows. 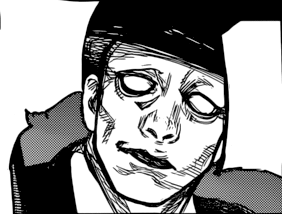 These ghoul bastards are putting us through the paces. For the sake of peace they must die.

A member of the organization V, and a former associate of Yoshimura. He appears to be a member of decent authority.