A group of resistance fighters operating in the Frontier, after an unspecified number of conflicts in the core systems cut off the colonies, the Militia established itself as an independent, self-sufficient government under the "Frontier Systems Territorial Defense Pact". The IMC is coming to reclaim its former territory, a prospect the Frontier's inhabitants will fight tooth and nail to avoid. The Militia is largely composed of various kinds of people living in the Frontier's star systems, from freedom fighters to mercenaries to citizen soldiers.
James "Mac" MacAllan

Leader of a small, backwater colony that is suddenly attacked by the IMC, James MacAllan agrees to a request for help in the Frontier Militia's war effort, provided they evacuate the civilians. Once completed, MacAllan leads the Militia, due to his history with the IMC and the experience and tactics he provides in dismantling their operations throughout the Frontier.

Voiced by: Abbie Heppe (Titanfall), Jolene Anderson (Titanfall 2) (English), Elena Ivasishin (Russian)
The Frontier's worth every part of this fight!

Sarah returns in Titanfall 2 as part of the campaign, but also as the leader of the Marauder Corps "Faction" in multiplayer. 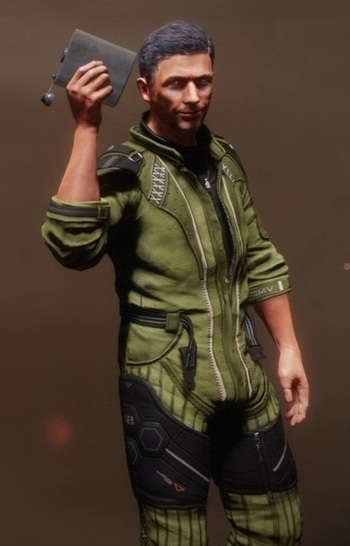 Another ex-IMC officer who served with MacAllan as his wingman during the "Titan Wars", Robert "Barker" Taube left following The Mutiny aboard the IMS Odyssey, fleeing to Angel City and drinking his problems away. However, Barker is thrust into the IMC/Militia conflict when he is unwittingly extracted by the Militia thanks to his knowledge of the location of an IMC blacksite called "the Boneyard" where he was stationed, housing valuable data for prototype "Repulsor Towers" which the Militia need for their first steps towards taking Demeter.

By the time Titanfall 2 begins, Barker has founded the "Angel City Elites", a freelance group of mercenaries assisting the Frontier Militia, while trying to solve mysteries behind their region of space. Barker is also head of the same-named Faction for multiplayer.

A combat intelligence specialist of the Frontier Militia, Cheng "Bish" Lorck is an IMC-trained electrical engineer. Although he was born and raised on Earth, Bish aligned with the Militia after a job placement by the IMC in the Frontier forced him to use up all his savings just to move there. His talents are not gone to waste as Bish becomes the go-to person for remotely hacking into IMC systems for Militia infantrymen during combat and providing tactics for Pilots.

Formerly known as "Hammond Engineering", the IMC is a massive, industrial conglomerate operating as a military corporation that funded the colonization of the Frontier, who have returned with its fleets to the distant human colonies to take back its old territories and exploit the Frontier's resources, while unifying their fledgling power base, by force if necessary.
Vice-Admiral Marcus Graves

The incumbent Commander-in-Chief, Frontier Command (Cincfront) of the IMC's military, Vice-Admiral Marcus Graves personally leads IMC forces in the Frontier. Unlike traditional commanders from the Core Systems, he operates far more informally thanks to the lack of protocol upheld in this region of space. Graves also has a reputation within the IMC for being a strategic maverick, able to deduce where the next Frontier Militia operations will be next and strike hard against them, though he's known to argue for a change in policy often deemed a potential detriment to the organization, while offering leniency for Frontier citizens. Graves has a history with Frontier Militia leader James MacAllan, serving as the Foil to him throughout Titanfall. 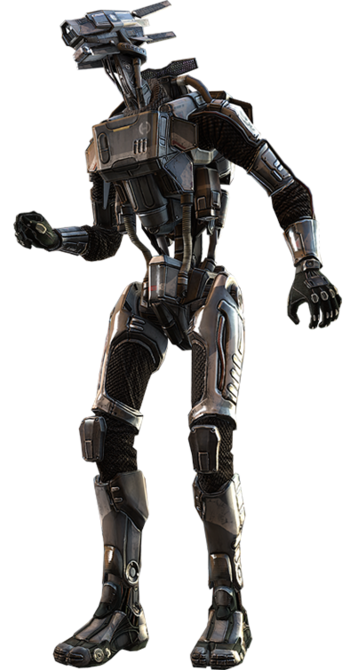 The physical representation of the IMC's vast computer network, the AI known as "Spyglass" is in charge of communications, logistics, navigation and infantry and Titan deployment of all IMC forces in the Frontier, serving as Mission Control for their ground operations.

Voiced by: JB Blanc (English), Alexander Novikov (Russian)
Oi! This fight is what you were born for!

Leader of the mercenary "Apex Predators" employed by the IMC, Kuben Blisk is hired as a commander for their infantry divisions, as well as providing combat intelligence and counter-insurgency tactics. Committed and loyal to whomever employs him, Blisk will always see to it his contracts are completed and is fully paid for his services no matter what. This "mission first" mindset means he will commit any action, morals be damned, ranging from massacring civilians to shooting down evacuation ships; because of this, Blisk is considered a wanted war criminal by the Frontier Militia.

After the events of Titanfall, he is again hired by the IMC to take over control of military operations on the planet Typhon in Titanfall 2. Approximately 30 years after the events of the latter, he hosts a Bloodsport tournament featuring the top mercenaries from across the Frontier called the "Apex Games".