This is a list of characters and Titans who appear in Titanfall 2; for characters making their debut in the first game, click here. 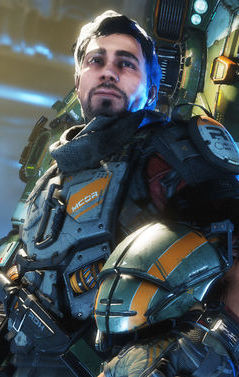 Voiced by: Matthew Mercer (English), Daniel Sheblanov (Russian)
"I'm a long way from becoming a Pilot, but when that day comes, I hope I can live up to the honor."

Protagonist of Titanfall 2, Rifleman 3rd-Class Jack Cooper of the 41st Militia Rifle Battalion in the 9th Militia Fleet dreams of becoming a Pilot, and is instantly thrust into the role of one when his mentor Captain Tai Lastimosa is killed-in-action after a horrendous start of the 9th Fleet's offensive on the planet Typhon. Throughout Titanfall 2, Jack forges a strong bond with BT-7274 in order to complete the Titan's mission on Typhon. 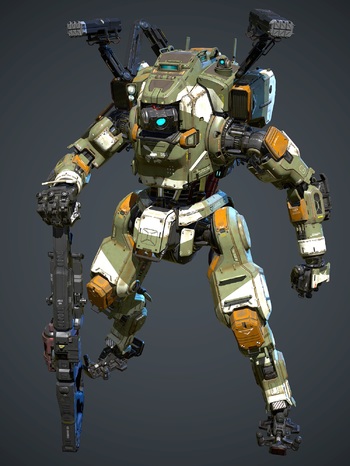 The Code Name of an artificial intelligence operating a Vanguard-class Titan, BT-7274 is the Militia's most advanced AI. He was previously operated by Captain Lastimosa, but the latter severed his neural link to allow BT take on Cooper as his new Pilot for their mutual survival while stranded on Typhon. 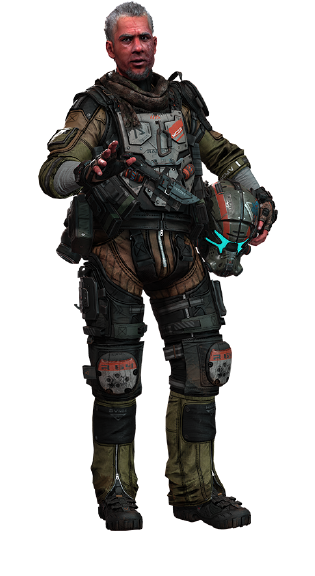 Voiced by: Fred Tatasciore (English), Vasily Dakhnenko (Russian)
"Technically, I'm not supposed to be training you. But in you, I see potential."

A member of the Militia Frontier's "Special Recon Squadron" (SRS), Captain Tai Lastimosa is a native of the Frontier planet of Harmony. For 973 days, he was linked to Vanguard-class Titan BT-7274 before transfering control to Jack Cooper, his unofficial protege.

A Militia SRS Pilot dispatched to investigate an unusual phenomenon on Typhon, Major Eli Anderson is in charge of "Special Operation 217". 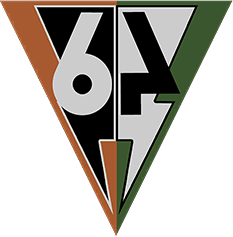 A freelance mercenary unit of elite Pilots, the 6-4 has a unique Code of Honor: they won't always work for the highest bidder. Like the Frontier Militia, its members want to protect the freedoms of the Frontier, but on their own terms. Its members include Section Commander Gates, Bear, Davis and Droz; the former is the Faction leader of the 6-4 in multiplayer, while Davis and Droz serve as Mission Control for "Frontier Defense". 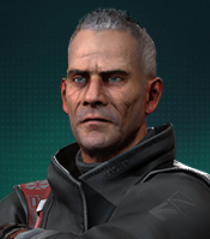 Voiced by: Nicholas Guest (English), Alexander Noskov (Russian)
"I do not require your understanding, only your compliance."

Head of the IMC's "ARES Division", General Marder will do anything to ensure the IMC maintains a technological edge over the Frontier Militia. He is also available as a Faction leader in multiplayer for the ARES Division. 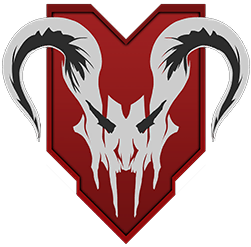 One of the most ruthless mercenary units in the Frontier, the Apex Predators are employed by the ARES Division of the IMC in Titanfall 2 to provide security on the planet Typhon. Tropes common to the mercenaries are:

Kuben Blisk is the leader of the Apex Predators, one of the most ruthless mercenary units on the Frontier. He will stop at nothing to get his paycheck. To him, this isn't his war; he doesn't care which side he fights for. As long as the paycheck's good, he'll get the job done.

The leader of the Apex Predators; for related tropes, see the character page from the first game. 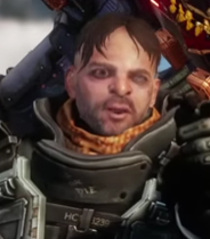 Voiced by: Mick Wingert (English), Mikhail Belyakovich (Russian)
"You were not invited to Kane's party. And that's why you're dead."

An Apex Predator mercenary using a Scorch-class Titan, Kane guards the exit of the sewage processing plant and fights Jack when IMC infantry cannot seem to kill the new Acting Pilot of BT-7274, serving as the Arc Villain of the level "Blood and Rust". 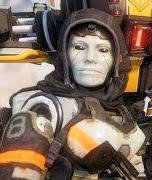 This Apex Predator mercenary is in charge of the combat simulation base on Typhon, utilizing a Ronin-class Titan for combat. Her Faction, Vinson Dynamics, is available to unlock and use as a Faction for Mission Control in multiplayer. 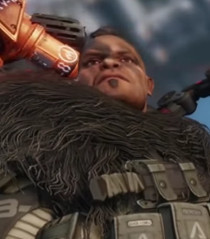 Voiced by: Andreas Beckett (English)
"Care to have a real fight? Let's see what you got up close and personal. Oder willst du weglaufen wie ein kleiner Jungenote Or do you want to run away like a little boy?"

An Apex Predator merc who pilots a Tone-class Titan, Richter is sent to mop up Militia forces when they reattempt to establish contact with the 9th Militia Fleet at a communications dish. 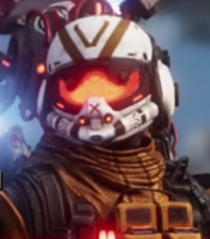 Voiced by: Evan Boymel (English)
"Voodoo One. Viper's on station. Your journey ends here, Pilot - the skies belong to me. Nowhere to run... Nowhere to hide."

A cold member of the Apex Predators piloting a Northstar-class Titan, Viper protects the IMS Draconis when the 9th Militia Fleet are chasing after it and the Ark. He downs a considerable portion of the Militia Fleet before facing Cooper and BT in battle. The latter brings him down after a tough fight, but Viper still manages to return, stop the two from going on to the Draconis, and tear off one of BT's arms in the process. He is eventually killed when BT blasts open his Titan's cockpit - which gives Cooper the chance to shoot him. 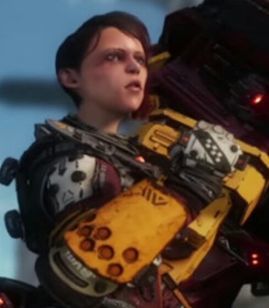 Voiced by: Amy Pemberton (English), Lina Ivanov (Russian)
"You know what I see when I look at you? A pile of easy money."

Blisk's right-hand woman, Slone is an Apex Predator mercenary who uses an Ion-class Titan and is the last obstacle standing in Cooper and BT's way at stopping the Fold Weapon. 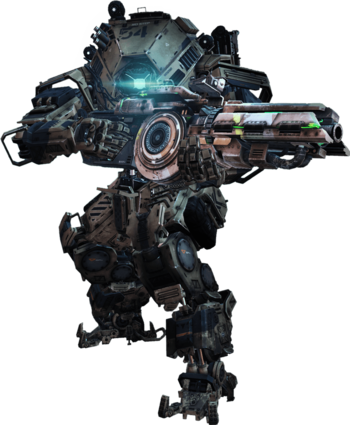 Specializing in Energy Weaponry, the Ion Titan can fulfill offensive and defensive roles with her "Splitter Rifle" and "Vortex Shield" respectively. Her "Laser Core" unleashes an over-sized laser beam when fully charged, annihilating all enemies caught in its path. 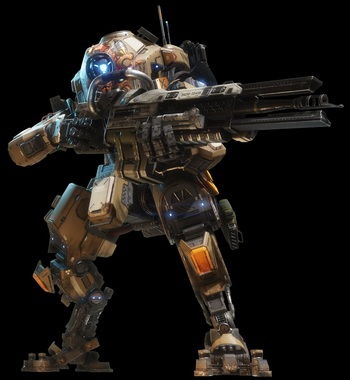 Voiced by: Jocelyn Blue
"My systems are yours. Paint as many targets as you can with the 40mm."

The Tone Titan excels at putting fire down at any range by using her lock-on based "40mm Tracker Cannon" to fire an arsenal of "Tracker Missiles" at any target. Her "Salvo Core" unleashes a massive barrage of missiles that can be guided in flight by the Pilot using the crosshairs. 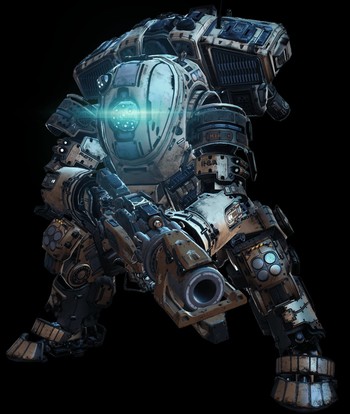 Armed with the "Thermite Grenade Launcher", the Scorch Titan is best suited for area-of-denial roles, trapping his enemies in bad spots and punishing them for mistakes in positioning. His "Flame Core" causes him to slam both fists into the ground, sending out a wave of highly damaging fire at his enemies. 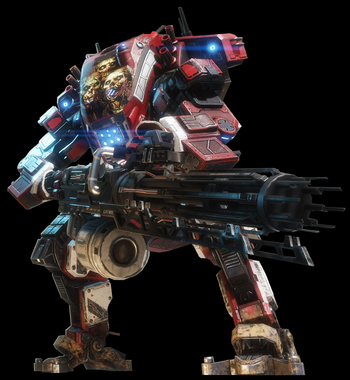 Voiced by: David Sheinkopf
"Predator Cannon at your disposal."

Focusing on defense and control-of-zone, Legion uses the "Predator Cannon" to mow down enemies, with his "Smart Core" granting the weapon's cannon rounds a lock onto any target in front of him. 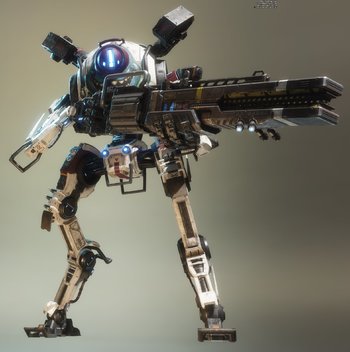 Voiced by: Norra Jane Noone
"Sharp-shooting Pilot, it is good to have you back."

A ranged-based Titan with flight capability, Northstar comes equipped with the "Plasma Railgun", a single-shot cannon that can be charged up while zooming in for more accurate, damaging shots. Her "Flight Core" allows her to hover in mid-air for a duration while raining a barrage of missiles on ground-based units. 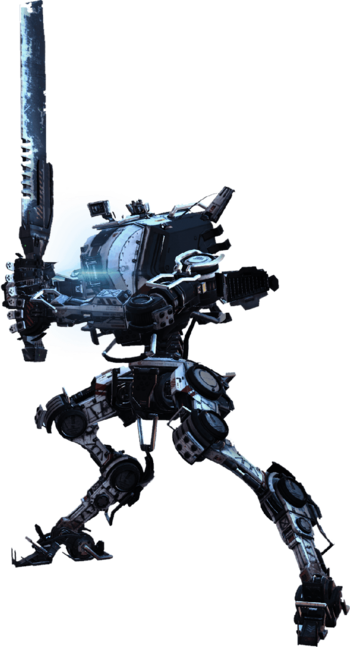 Voiced by: Keith Ferguson
"The sword is yours, Pilot."

Ronin is a highly mobile lightweight Titan armed with the "Leadwall" shotgun cannon and a "Broadsword". Although fragile, he has the ability to block attacks with his blade to reduce the damage he takes. His "Sword Core" empowers his already strong melee attacks while also giving a boost to his mobility. 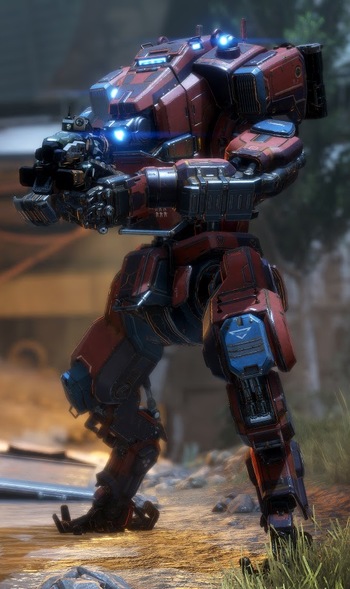 Voiced by: Catherine Taber
"Pilot on board. Ready to uphold the mission."

A mid-range Vanguard-class Titan, the Monarch focuses on flexibility through survival, offering multiple support options for Pilots to serve in different combat roles on the battlefield. Armed with the "XO-16 Chaingun" and "Rocket Salvo" like the default Vanguard, Monarch possesses the unique "Upgrade Core", allowing her to improve her combat capabilities during battle, as selected by her Pilot. She also comes equipped with "Energy Siphon", drawing power from enemy Titans to recharge her own shield or those of ally Titans, and the "Rearm" skill to instantly refresh her other abilities (sans "Upgrade Core").