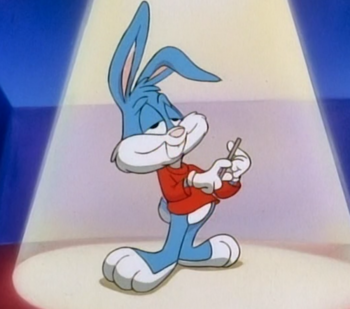 "This is the last time I do a cartoon without reading the script first."

The male cohost of the show, a blue-furred male bunny. Effectively The Everyman of the show, being that he is generally portrayed as the smartest, most sensible and levelheaded of the protagonists, although not to the extent he's incapable of doing wacky stuff himself. Not related to Babs Bunny, but the two of them are occasionally hinted as being either a couple or attracted to each other. 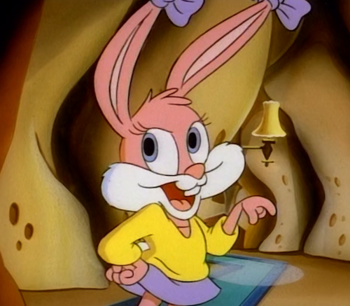 "I just can't help myself!"

Looney Tunes counterparts: Bugs Bunny (specifically the Bugs Bunny that dresses in drag to trick his enemies, and represents the manic and zany part of his personality), and Honey from the Bosko cartoons.

The female cohost of the show, a pink-furred bunny. In contrast to Buster, she is more manic and wacky, though still capable of getting serious and sneaky if she thinks she needs it. Despite having the same last name, as they constantly reiterate, they are not siblings. Many episodes do imply some level of attraction between them.

Note that both Babs and Buster apply the Pink Girl, Blue Boy trope directly. Babs was a possible inspiration for a character introduced a couple years later, Lola Bunny. 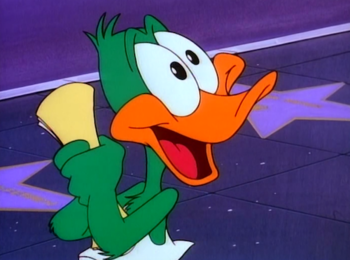 A green-feathered, arrogant, narcissistic, bungling young drake, Plucky wants to be the metaphorical leader of the pack, but his arrogance far outshines his competence. Though he craves attention, he rarely gets it, at least not for the things he wants to get it for. 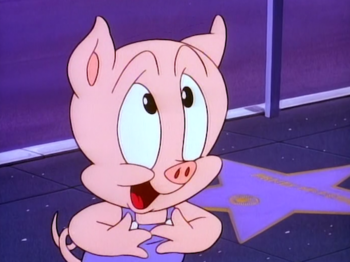 "I clean things and react to characters funnier than I am."

A somewhat milquetoast young pig, Hamton is the unabashed Straight Man of the protagonists; not wacky himself, but capable of generating laughs by playing foil to the more weird and manic outbursts of his friends. He's a nice guy, but a bit of a pushover, tending to be shoved around by his friends — especially the more extroverted and insensitive Plucky. 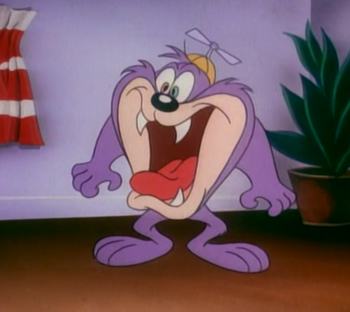 A hyperactive young "Tasmanian Devil", Dizzy is a fairly one-dimensional character; he likes having a good time, whether that involves partying or just stuffing his face with absolutely anything. He does have a bit of a temper, though. He's a secondary character, mostly relegated to starring in shorts alongside the others rather than starring in his own stories. 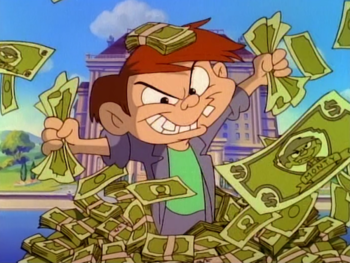 "What? You expect me to have morals?"

The primary male antagonist of the show, a human kid whose ultra-rich family gives him a lot of finance-based weight to throw around. Selfish, greedy and a vicious, evil monster, he takes great pleasure in making everyone else utterly miserable whenever he can. 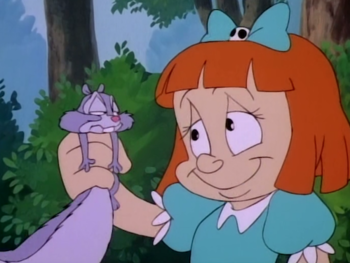 The primary female antagonist of the show, in contrast to Montana Max, Elmyra does not intend to be a bad guy. She is a very loving girl, with a huge fondness for animals. She is just a complete and utter moron who fails to realise that she is being too rough and clumsy with her pets. This results in a disturbing amount of on-screen injuries — and off-screen implied fatalities — and makes her more hated by her animal toon classmates than Montana Max. They can easily pay Max back in kind, but Elmyra's obliviousness means that she lacks malice, which means that their attempts to get her back usually don't work. 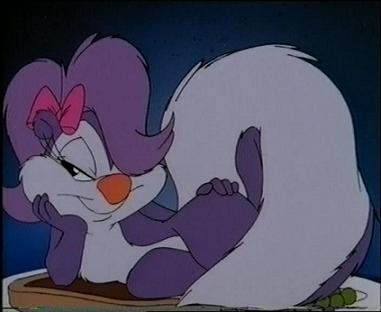 A lustful female skunk filled with deep passion and an all-consuming desire for a soulmate, Fifi comes from an implicitly poor background — living in a derelict car in a junkyard in Acme Acres — and is determined to find herself a Mr. Right. No matter how badly her smell and/or her aggressive come-ons tend to hinder her effort. 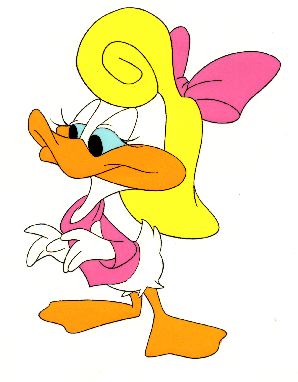 A female avian toon of indeterminate species — her name suggests that she's a loon, but her appearance is near perfectly that of a duck — Shirley may speak with a Valley Girl accent, but don't let that fool you. Under her vapid-seeming speech patterns and neo-hippie beliefs lies a keen mind and a formidable grasp of mystical powers. She is more or less Plucky's girlfriend, although Fowlmouth keeps trying to woo her away from him. 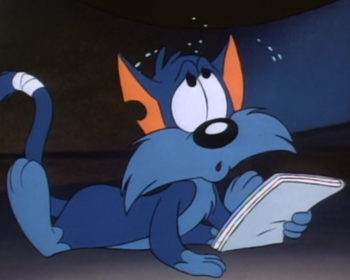 Looney Tunes counterpart: Sylvester (although he also shares traits with Penelope Pussycat [the cat who always gets painted up as a skunk on the Pepe Le Pew cartoons] and any generic cat character meant to be prototypes of Sylvester).
Voiced by: Frank Welker when voiced at all, except for one episode when Rob Paulsen voiced him instead (English), Ryuzou Ishino (Japanese), Rafael Monsalve (Latin American Spanish), Roland Timsit (French)

An incredibly unlucky alley cat who struggles to fend for himself on the streets of Acme Acres, sometimes being so desperate as to tolerate living with Elmyra for a while in order to attain food and shelter. 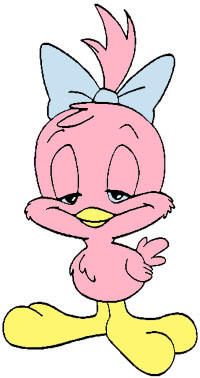 An ironically named pink female canary whose cutesy appearance hides a sarcastic attitude and an immense sadistic streak. She loves to feign innocence and harmlessness, both to lure in victims for her to abuse and to get away with tormenting other toons. She has a particular relish for harassing the luckless Furrball. 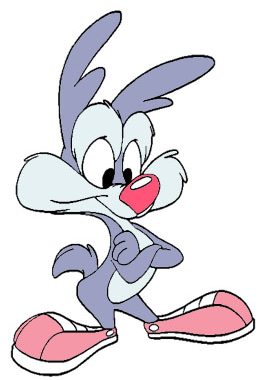 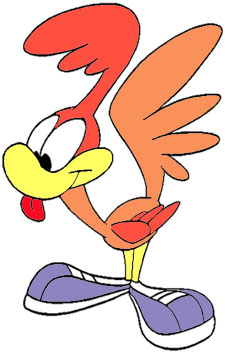 A male road runner most notable for his super-toon speed and his enjoyment of harassing and tormenting Calamity. 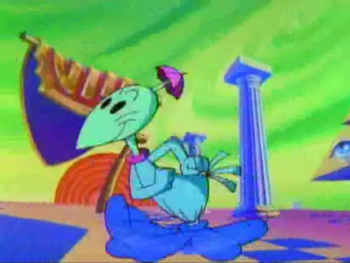 A hyperactive and crazy male "Dodo Bird" from the ultra-loony region of Wackyland, beyond Acme Acres. Mostly a cameo character who tends to show up for gratuitous random madcap humor.