This is a subpage of Thorn Universe listing characters from Dora Wilk Series, Shaman Blues and The Girl from the Miracles District.

Magicals are supernatural beings that come from Earth rather than Heaven or Hell. Encompassing everything from paganic gods, witches, elves and dwarves to vampires and werewolves, they are by far the most diverse of the three groups, and most likely to manifest among regualar people. They mostly live in cities built in parallel realm, such as Thorn (perpendicular to Toruń) or Triple Alliance (perpendicular to Three-City).

For vampires and werewolves, see here. 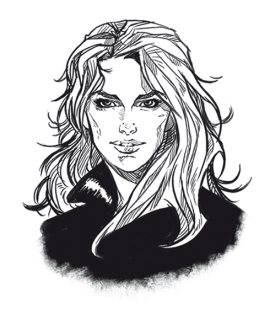 "Don't believe all you've heard about me - unless you've heard I'm awesome. Then the rumours aren't exaggerated."

Nominally a half-Northern Witch, half-Fertility Witch, with a dash of werewolf, Dora is the main protagonist and narrator of her eponymous series. With both of her parents manifesting none of their supernatural genes, Dora was raised among humans, and continues to do so until the events of the first book force her to move to Thorn. Her experience as a police officer makes her a go-to person for the Thorn Council whenever supernatural trouble is about. 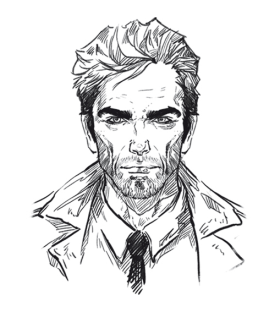 "Deep down, we're all afraid that if we were to show our loved ones who we really are, they'd run away screaming."

A melancholic cop tired of life and past a wide variety of experiments with less-than-legal substances. Witkacy is Dora's partner in the police, and seems to be her Muggle Best Friend at first. However, he finds out that he is supernatural himself, being a shaman - something he was unaware of for the first forty years of his life. Protagonist and narrator of Shaman Blues. 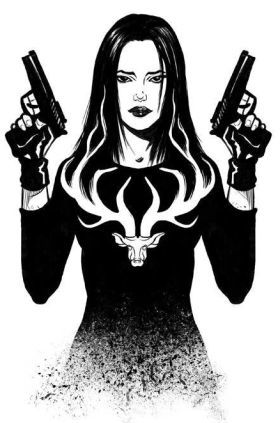 A daughter of a berserk and a human, Dora's once-girlfriend and a professional assassin working for a guild called Order of Shadows. She's emotionally cold and an expert killer, but her relationship with Dora is rather friendly, if spiced with a lot of vitriol. Protagonist and narrator of The Girl from the Miracles District. 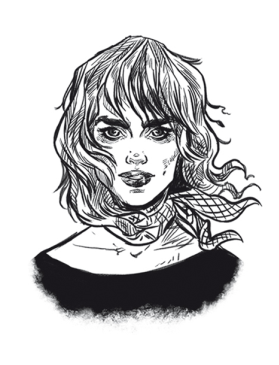 A powerful necromancer, as well as Dora's good friend and Witkacy's sometimes girlfriend. Katia is an expert on both fashion and death magic, and most of her job involves cleaning up other necromancers' messes.

Katarzyna, Lady of Fire and Water

The leader of Thorn's witches and witch-like beings, and representative thereof in the Council. She's an extremely powerful witch, noted for her proficiency with elements of fire and water, and also a mentor to Dora and her staunch ally in the Council. However, she has a Dark Secret - or what she sees as a Dark Secret.
Gardiasz

Gardiasz, Lord of the Afterlife

An extremely powerful necromancer and Council representative of magicals dealing with the afterlife, effectively making him Witkacy's and Katia's boss. He's a gruff and stiff man who doesn't tolerate insubordinance, so his relationship with both Dora and Witkacy doesn't go beyond semi-polite work arrangement.
Spoiler Character 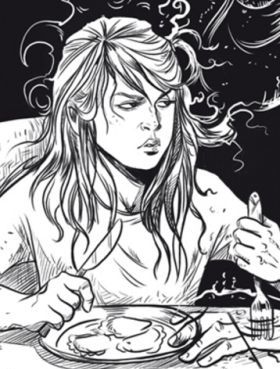 Witkacy's daughter with Konstancja, she's been living mere few streets from him, but didn't meet her father until Konstancja realizes that Wiktoria might've inherited something from Witkacy and decides to introduce the two. Wiktoria takes her father's existence in stride, although she's not nearly ready to call him "dad".

An assassin raised by the Order of Shadows' Rome branch, who's assigned to Nikita as her partner. Only his file is obviously fake, he's had his memories wiped out, and what little he has left in his mind paints a bit different picture. A Walking Spoiler kind of character.

The eponymous Soul Thief from the first novel and Dora's first full-fledged magical antagonist. Vlad is a magical of unknown type, who's been stripped of his powers some twenty years prior for gross misuse of them. He's kidnapping and killing magicals to regain them.
Juliana

A half-elf and an owner of Triple Alliance's premiere nightclub, also a leader of Alliance's magical community. She's a mentor of sorts to Dora, having overseen her training back in the day, and continues to care for her erstwhile student.
Kaj and Lila

A pair of pure-blood elven children from Toruń's cairn, who come to Dora after hearing of her trouble with Bruno, hoping that she might help them with a problem of their own.
Ernest

A world-renowned berserk and Nikita's father. He's infamous among the supernatural community, but has seemingly dropped off the face of the Earth several years prior, after his daughter's kidnapping went wrong.
Karma

A teenage girl gifted with numbers magic and a knack for computers, making her, in essence, a supernatural hacker. She's working on tracking Ernest down for Nikita, and in the meantime takes on any challange the assassin can give her.

Faoiliarna, Queen of the Wolves

Faoiliarna is an esteemed wolf goddess and Dora's ancestor, who's been waiting for generations for a female descendant who'd inherit her powers so that she might start a great conquest and unite all werewolfkind under her family. Suffice to say, Dora isn't thrilled.
Vulture

A vulture spirit who doesn't divulge his name, he becomes Witkacy's patron guide in the spirit realm, somewhat against Witkacy's wishes. An oft-loathsome presence, he's nevertheless extremely powerful and helpful - when he feels like it, that is.
Badb 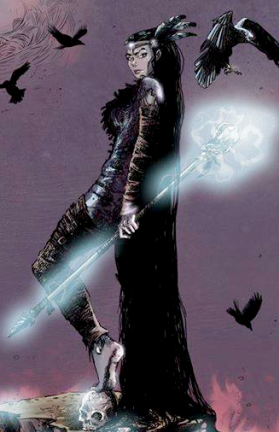 One of the Morrigans, Celtic war goddesses. Badb has little regard for human life, but is best friends with Faoiliarna and the two often go hunting together. She forcefully enlists Dora to help her finish a centuries-long conflict with Loki.

Norse god of mischief and fire, and Badb's arch-enemy in their cosmic game of dice. He schemes to bring about an open war between three factions of the Alliance as part of his never-ending competition with the War Crow.
Mother Earth

The Nature deity, and the highest goddess of them all, worshipped by all magicals regardless of their culture. She's honestly kind and caring, but it appears she can only act through mortals - which doesn't stop her from influencing events in the story.
The Old Ones 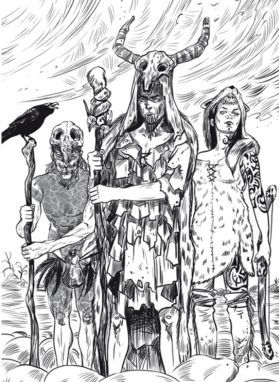 A cabal of ancient shamans (and their pet smilodon) who currently prowl the spirit realm and who's made it their job to painfully initiate any new shaman to bring out the most of him. They find it rather annoying that Witkacy doesn't wish to participate in their rituals. 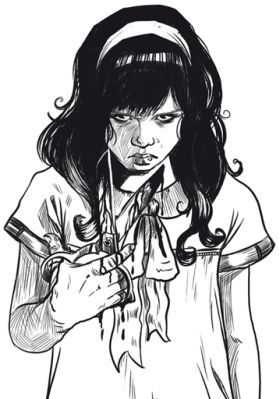 A young girl who's been murdering children back in the heyday of the Cold War to grant herself a form of immortality - after death, she became a wraith, a particularly nasty and powerful ghost. Now, decades later, she returns to perform the same ritual again.