This is a subpage of Thorn Universe listing characters from Dora Wilk Series and Shaman Blues.

Hellians and angels form a separate "system" from magicals and, rather than in a paralell world, they live in Hell and Heaven respectively. Angels are classified according to vague ranking system, with Archangels nominally being in charge (God does not interfere in day-to-day workings of Heaven), while Hell is a mixture of locals who's been there forever, fallen angels ruling over them all and ancient deities who's found their home there after being kicked out of their native pantheons. Some forty thousand years ago, the Fall of the angels happened, but by the modern era, the war's been long gone and relationships between the two realms fairly civil, to the point that they waged war against magical system together in seventeenth century - contributing greatly to the prevalent Fantastic Racism of the setting. 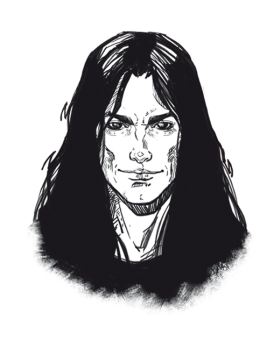 Grandson to Lucifer, but also a slacker and a three-hundred-years-old bachelor, travelling the Earth in hopes of not getting involved with the family business. He's something of a close associate of Dora's at the start of the story and as time goes on, the two of them start drifting closer together.

The Lucifer - Luc to friends and family. Master of Hell and arguably most powerful of its residents, he commands loyalty of all czarts - the original hellians - and most of the fallen angels. He's Miron's grandfather and eagerly welcomes Dora into the family even before the two get together.
Leon 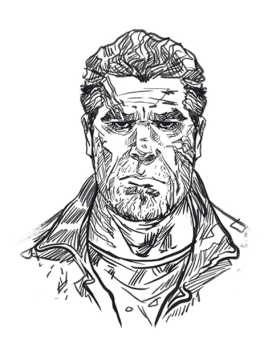 A half-demon, half-angel, and a retired general in Lucifer's army. He currently runs a hellians' pub in Thorn, and when Dora starts visiting it, mistaking it for a place for everyone, he quickly grows fond of her, to the point where she considers him a surrogate father for her.

Baal, the Crimson Prince of Demons 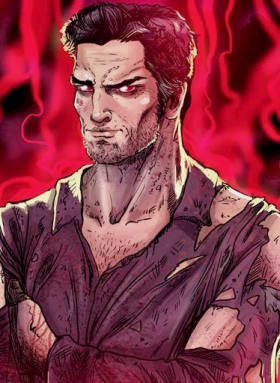 By far one of the most powerful lords of Hell and certainly the most fearsome one, Baal commands Hell's demons. He used to be a fairly benign fertility god before a plot by Hel and Isis ended up throwing him down into Hell, where he clawed his way up to the top of the foodchain and forged himself a bloody reputation that he's now forced to preserve if he wishes to survive. 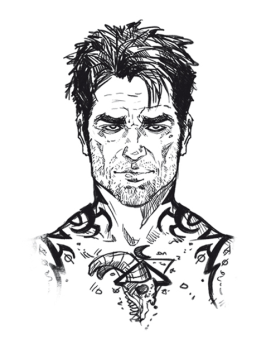 Nicknamed As to hide his true name, Arsen is a demon of two bloodlines, Rage and Chaos. He's a trusted servant of Baal's and his right hand, making him involved in Dora's affairs far more often than he'd wish to.

A once-princess of Demonkind, who narrowly averted death when Baal overthrew her family and crowned himself the Prince of demons. Having faked her death, she spent centuries plotting revenge before finally attempting to extract it.
Ibrahim

Iris' older brother, and a once-prince of demons. When Baal took over, he trapped him in an amulet and buried it, keeping Ibrahim trapped until Iris and Jezebel unearthed it and got Ibrahim to return as part of Iris' plan to take revenge on Baal. 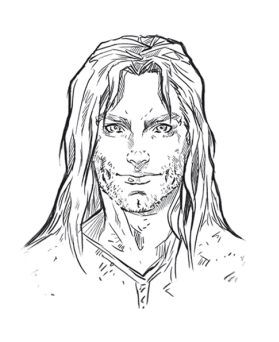 The grandson of archangel Gabriel - and Raphael, though this doesn't come up as often - Joshua is a three-hundred-years-old angel and an all-around Nice Guy who desperately attempts to avoid becoming yet another pawn in his grandfather's political game, leaving him a drifter. Miron is his best and only friend, and through him Joshua meets Dora, whose Guardian Angel he eventually becomes.

One of Heaven's seven archangels, member of Archangelic Council and Joshua's grandfather. Gabe is an experienced politician and a good ally to Dora's cause, although he often slides into thinking of his family as another asset to be used in the great game. He nevertheless has a soft spot for Joshua and cares for him deeply - though he'd die before showing it.
Michael

The lord of all archangels and head of Heaven's army and Archangelic Council. Michael is the level-headed of the bunch and the most unbiased one, but also the most inhuman and detached. He acts as an older brother of sorts to Luc and Gabe and has been in Triumvirate bond with them before Luc's Fall.
Raphael

One of the members of Archangelic Council of Heaven, and the seven's God-ordained Healer. He's also, unfortunately, a racist through and through, reserving special hatred for half-bloods and angels willing to consort with non-angels, putting him in instant conflict with Dora. He is also possessed, and part of the supposed racism is the demon trying to avoid anyone who could smell it on the supposed archangel.
Raziel

Another member of the Archangelic Council, Raziel is the Keeper of Secrets of the seven. He possesses the ability to discern thruth from lies, find guilt and read minds of those he examines. This makes him an judge of the Council, and an ally to Dora when she reveals to him the extent of Raphael's actions and possession.
Azjel 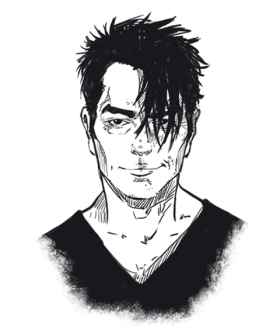 The last in the long line of Abaddon's, Heaven's ordained executioners. He's been raised from childhood to be his fahter's successor and as a result is rather emotionally damaged and immature. When Dora starts treating him as a person rather than a tool, he becomes more questioning of his surroundings and his boss, Raphael, in particular.

Once a priestess of Baal, she switched sides and became an agent of Heaven, granting her amnesty. She is, however, only feigning her turn to good and while she pretends to work for Raphael (whom she's a lover of), in fact she's an associate of Iris, and responsible for Raphael's possession.
Nat

A half-brother to both Miron and Joshua, having been born when Jezebel hexed Miron's mother to have an affair with Joshua's father. Raphael has kept him locked up in his institute for half-bloods until Gabe and Luc rescue him and bring him to his half-brothers so that the kid might get a taste of a normal life.
Nisim 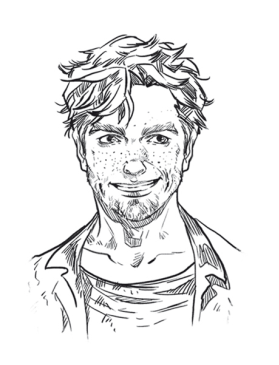 Raphael's son and a nephilim - half-angel, half-human. Nisim is an excellent spymaster and an information broker, and has spent a lot of time investigating his father's apparently-hypocritical behaviour. He's fiercely protective of half-bloods such as him and sets up a "school" where child victims of racism and abuse can recuperate and learn to reconcile their double heritage.

A half-hellian, half-angel, Laoise is a victim of Raphael's Fantastic Racism and has spent several hundred years on heavy medications. Ever since being freed, she's been undergoing psychological treatment and healing, and has developed a mutual affection for Joshua.