Characters / This Is the Worst Idea You've Ever Had! 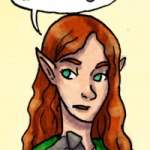 Official Biography: Nicole is the second of Doctors Leyla and Paul Masterman’s three children. Nicole’s parents made a name for themselves about 30 years ago during a series of studies that led to the discovery of magic, they’ve been the foremost experts in the field ever since. Nicole was a bright young girl, but was never terribly motivated due to being overshadowed by her famous scientists parents and genius older brother, Martin. Like her parents, Nicole is interested in paranormal science and has a Bachelor’s degree in Paranormal Biology from SouthSide Virginia Technical University (SSVT) where her parents are professors.
These days she’s a clerk at an ABC store and spends her off time being a geek with her friends. Her main hobbies are playing video games and watching obscure films, she also enjoys cooking and mixing alcoholic drinks. 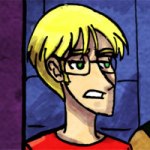 Official Biography: Ian is Nicole’s best friend and roommate. They met sophomore year of college and have been close friends ever since. Like Nicole he’s a fan of video games and has similar taste in movies and music. He’s currently the only person in their group of friends with a salaried job. 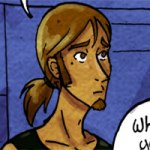 Official Biography: Caine is a comedian, bad ass, and all around ladies man, or at least he thinks he is. He’s another college buddy of Nicole and Ian. He moved to River’s Crossing to attend college and just decided to stay. Currently he lives in a basement level apartment in what used to be a plantation house.

In his free time he likes to make web videos and flirt with random girls. He also claims to be working on a movie script. 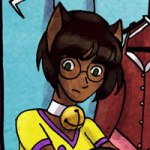 Official Biography: Cynthia was Nicole’s roommate through most of college and they became close friends during that time. After graduating she decided to stay in River’s Crossing since all her friends are there and it’s much cheaper than moving to a larger city. She’s currently paying the bills by waiting tables until she can finish her first novel and hopefully get it published. She won’t reveal much of the plot except that it’s a murder mystery. 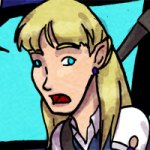 Official Biography: Abigail is Nicole’s younger sister and the youngest of the Masterman children. Unlike Nicole, Abigail is not very interested in magic or science and is really only going to school to meet boys and because her parents want her to. Her primary interests include: going to parties, dating, clothes and make up, and celebrity gossip. After college she intends to “marry a rich doctor or something”.
As a general rule, Abigail and Nicole get along pretty well, despite the fact that they don’t understand each other. 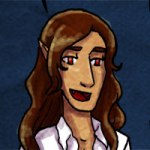 Official Biography: Nicole met Sergio several years ago through a blind date set up by Abigail and her then-boyfriend Greg. She found him very charming and mysterious, the sort of guy she might be interested in if she were to be interested in anyone. After going on a few dates he disappeared, only to reappear again recently. Nicole still finds him charming and mysterious; Ian thinks he’s a creeper.
At first glance Sergio appears to be a chivalrous, nice sort of guy, but he tends to view women as property and when angered, he can be very dangerous. 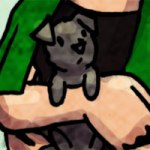 Official Biography: Nummy Muffin is Nicole’s dog, adopted shortly after moving into the house with Ian. He enjoys naps, snuggles, and chasing squirrels almost as big as he is. 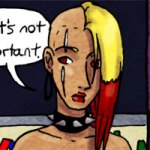 Official Biography: Dawn was the girl Sergio was interested in before Nicole caught his eye. Prior to becoming a vampire, she’d been the frontwoman of an almost successful punk rock band but had to give it up when she “died”. She can be somewhat unstable, and, like Sergio, is somewhat prone to violent outbursts. 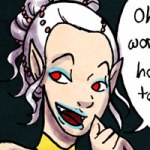 Official Biography: Carmilla is the owner of the private club, Phantasmagoria, located in downtown River’s Crossing. She likes pretty clothes, dance parties, and pretty girls; she dislikes people starting fights in her club.
As the oldest vampire in the city and surrounding area, Carmilla has a certain level of authority over the other vampires living nearby. 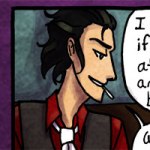 Official Biography: Gabry is the charming and fun loving owner of the only antique book shop in River’s crossing Books & Such, located at 124 Second Street (they also have coffee and scones). He and his partner Liam live in the apartment located above it. He likes to hang out at Carmilla’s club at night, presumably to bother her and make Liam uncomfortable. 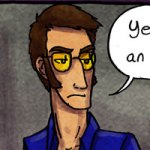 Official Biography: Liam is Gabry’s aforementioned partner (both in crime and the domestic sense). He runs most of the practical end of the business, such as the paperwork and finances, he also makes the scones. Unlike Gabry, Liam is quite stoic and standoffish, preferring to stay at home and read than go out on “adventures”, or at least that’s how he says he feels. 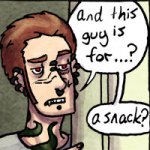 Official Biography: Seth lives in the plantation house with Sergio and the rest of his entourage. Sergio apparently found him useful for something but he’s mostly just a lazy jerk. He likes to push around mortals and other vampires weaker than him but is a complete wimp around anyone who could pose a real threat. 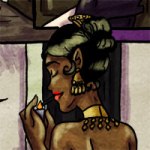 Official Biography: Lily also lives in Sergio’s plantation house and is probably the one who originally acquired it. She’s one of the oldest vampires in River’s Crossing and has something of a superiority complex partially due to it. She gets along well with Sergio mostly because he’s one of the only people she views as an equal. She also has some kind of history with Carmilla, and hates her as a result.

Briefly seen in the prologue, introduced as Abigail’s then-boyfriend. By the time the main story occurs, he’s another vampire who lives with Sergio. 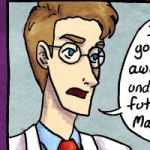 Official Biography: Anton is a talented, if inexperienced doctor at the local hospital. Gabry and Liam seem to have roped him into treating any injuries sustained in their unusual line of work. As such he’s pretty well versed in illnesses and injuries that may be magical in nature or monstrous in origin. He wishes he was a pediatrician instead.

Official Biography: Bunnie is the owner of the appropriately named Bunnie’s Bar and Grill where Cynthia and Jeremy work. She decided to open it after her daughter Kimmie was born with features resembling that of a field mouse. There are few job opportunities for Beastmen, even in a city where they are relatively common, so Bunnie wanted to help in whatever small way she could. She is also somewhat of an activist for equal rights for beastmen. She views her employees as surrogate children of sorts.

Official Biography (originally attached to Bunnie's): Kimmie attends a local private school. She is very shy and wants to be a dancer when she grows up. 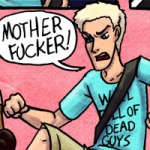 Official Biography: Jeremy is originally from somewhere in New England and is the son of a fairly prominent surgeon. He’s somewhat disappointed his parents by not wanting to be a doctor of some type as well. Like Cynthia, he wants to be a writer and they sometimes critique each other’s work. 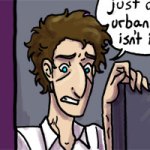 Official Biography: Jordi works at the same ABC store as Nicole and is frequently terrorized by her pyromancy. He sometimes hangs out with her and the rest of her friends outside of work, and doesn’t seem to have many friends of his own. In his spare time he’s a reasonably good photographer and also plays guitar a little bit so long as no one is listening.

Oh, and he drives a motorcycle. Jeremy thinks it it totally badass; Nicole thinks it is too badass for a guy like Jordi. 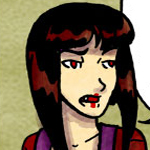