Characters / There Will Be Brawl

Matt Key (Luigi): "People wanna watch There Will Be Brawl because it's the entire Nintendo universe fighting. I mean, is way beyond the Mario Brothers, I mean, by end of the series we will have like 50 different characters that have made small little cameos parts in there, and that's..."
Paul Duraso (Mario): "That's what you always wanted as a kid. To play Mario and Zelda."
— There Will Be Brawl: On Set

A Character sheet for the cast of the Deconstructive Affectionate Parody that is There Will Be Brawl. Now, we know that almost the entire cast is Darker and Edgier and many of them give away several Mythology Gags, so let's give those for granted already.

open/close all folders
Our "Heroes" 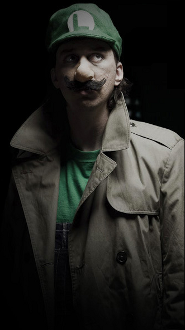 "It will not be a Melee. It will be a Brawl."
Played by: Matt Key

Mario's younger brother, a good man going through bad times, doing what he got to do. Secretly a drug dealer working with his not-friend Wario and some other not-so-noble activities, but he will still do what is right when it's needed. 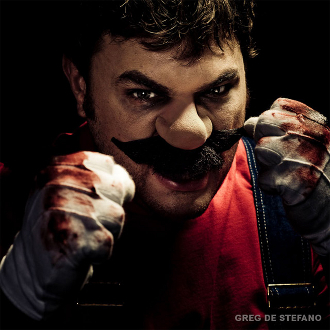 It's-a me, Mario! But not the same anymore. Our well known hero here has fallen into infamy and apparent depression. No longer a plumber, failed as a doctor, he nowadays resorts to drinking to drown his problems, but when Peach is kidnapped again, after falling at the bottom for a while, he got back up like never before, determined to rescue her. 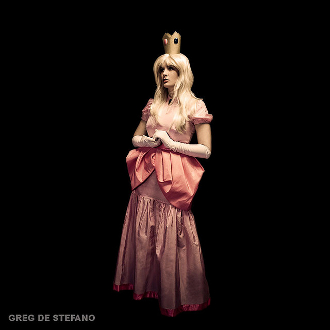 "One child. No matter how far we fall, we are never past redemption as long as we can hear the laughter of one child."
Played by: Kat Steel

Still the princess of the Mushroom Kingdom, Peach is having a hard time dealing with the newly corrupt city, while her relationship with Mario and Luigi) is attempted to keep secret, yet it's causing her troubles. When she gets kidnapped again, Luigi and later Mario strive to find her. 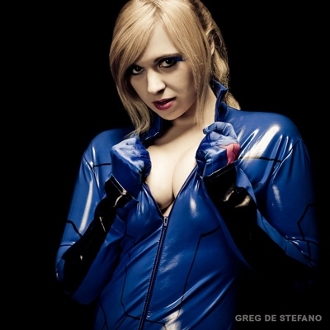 "Lucky for you, girls on my line of work have all sorts of contacts."
Played by: Becky Young (Zero Suit) and Daisy Viktoria (Varia Suit)

A popular stripper who uses her job to get plenty of information. Luigi recurs to her when seeking leads in his search for the princess, and from there onward she tags along in his fight to save the kingdom. 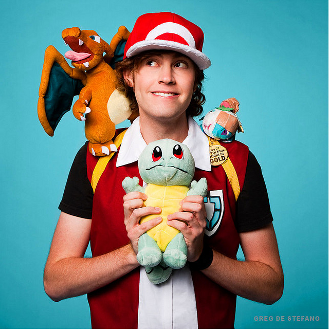 "So, was I any good?"
Played by: Kyle Blythe

A young Pokemon Trainer of an innocent and generous personality. He's possibly the only untarnished good guy of the entire cast, working for Mewtwo and Wario but remains oblivious to their crimes, working at the Pokémon orphanage in the slums. 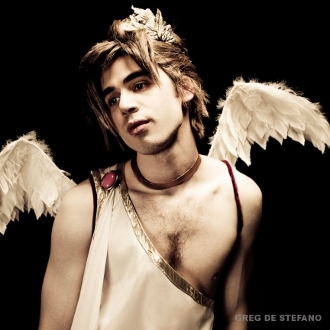 Star of Tingle's Gay Bar and Captain Falcon's personal bitch. As for himself, Pit is mostly innocent, yet not really heroic. He gets involved in the problems of Mario and Luigi, but remains mostly neutral about the situation. 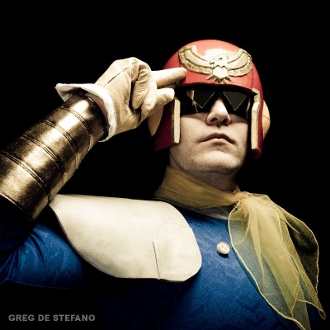 "Come back sometime. Maybe... show me your moves."
Played by: Damian Beurer

The one in charge of Tingle's Gay Bar when the boss is out. Like his little boyfriend, Pit, he prefers to stay away from the conflicts arising around the city, but won't doubt to raise his legendary fist in order to rescue Pit when necessary. 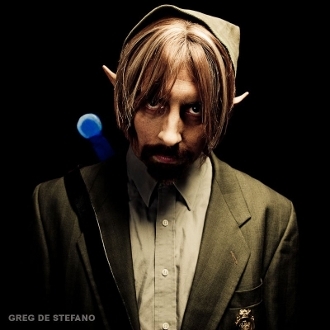 "None of us are the heroes we're supposed to be."
Played by: Tony Rago

Chief of the Mushroom Kingdom police department, and quite aware of how cynical he has become. He's willing to do what he has to in order to employ the law and bring down the mafia groups, regardless of what it takes. He comes to his senses and realizes he's being played by Zelda and Ganon, only for Zelda to stab him with the Master Sword. He recovers in the nick of time with a Maxim Tomato and makes his last heroic stand against Ganon, but fails—the sorcerer kills him. 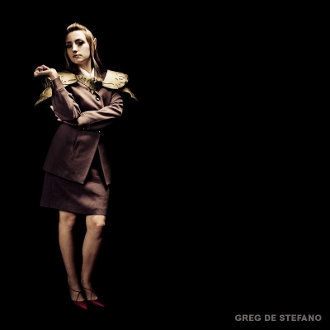 "We'll rule this kingdom together!"
Played by: JoEllen Elam

Former princess of Hyrule, a nation that has fallen and been absorbed into Mushroom Kingdom. She works for the police, either as an Office Lady as Zelda, or as a secret agent as Sheik. However, it seems that her ambitions go too far, appointed the substitute ruler of the Kingdom by Link after Peach's disappearance. 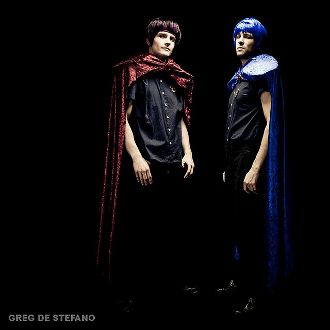 A couple (yes, in the romantic sense too) of officers working under Link's command at the police department. They pass out as mostly formal, but aren't very kind to the immigrants or former heroes. A flashback implies Marth's partner was Roy, before his death.

A pair of corrupt cops, neither which are like their video game counterparts, both being very sadistic and take pleasure in the pain of others.

A... whatever he is, working for the Police Department for only one reason: Watch over Kirby. When Kirby escapes during a jailbreak, it seems Meta Knight will finally have his revenge on the cannibal. 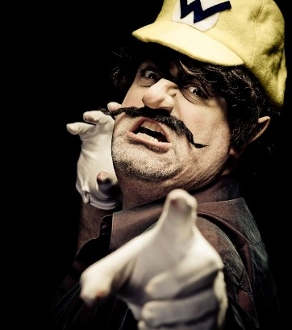 Sells drugs and engages in other unethical activities. Wario was working under Mewtwo's command until the mafia don was killed. Wario is potentially the most unlikable character in the series for how much of a jerk he is, and how willing he seems to be to backstab anyone as long as it benefits him.

"Tennis?"
Played by Jeff Lewis (you know, from The Guild!)

Wario's mentally disabled brother. Wario doesn't treat Waluigi very well, keeping him locked in a pen most of the time, but the fact that he looks after Wa at all is his sole redeeming quality. 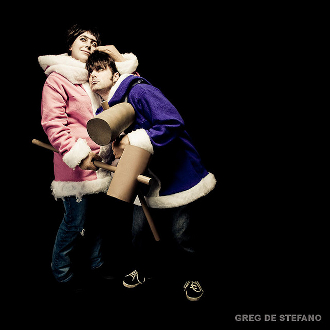 They're working under Wario, and one of the most prominent examples of how far the Darker and Edgier setting has gone. They never speak, but you really wouldn't like to share a word with them.

Used to be Mario's pet until he had to sell him and two other Yoshis to Wario for financial problem, after failing his medical practice. Yoshi seems to have grown aggressive and feral under Wario's watch. Still, when confronted by Mario, as he puts it, Yoshi remembers who the real alpha dog is. 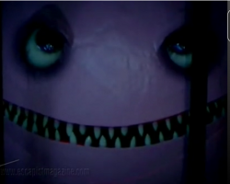 "Only I can lead you to your butcher."
Played by: Matthew Mercer

Forget everything you ever knew about the cute and lovable Nintendo character here, because this Kirby is a walking Homage to Hannibal "The Cannibal" Lecter. He was the monster who raised terror in the Mushroom Kingdom six years before the beginning of the series, until Mario and Luigi managed to stop and imprison him. 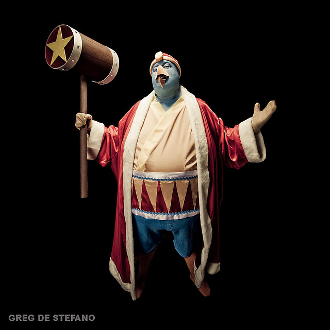 "The last thing this city needs is more bloodshed."
Played by: Kirk Diedrich

One of the four mafia dons, and the most likable around the kingdom, having gained popularity among both the poor and the rich. He runs a whorehouse and is somewhat unfriendly when dealing with people, but despite his position, he wishes for the arising crisis to end. 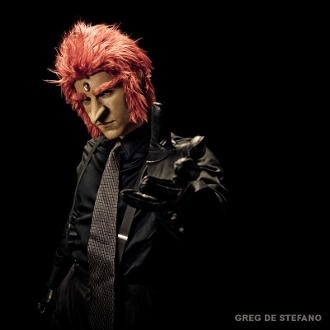 "Your kingdom will know its new ruler. And if it doesn't, it will burn."
Played by: Matthew Mercer

Another of the mafia mobs, still resenting the Old Shame that was the fall of Hyrule, mostly due to the fact the kingdom fell due to a bad economy rather than his minions and magic. He plans to take over Mushroom Kingdom, manipulating everyone he can in order to get his way.

"Those were the good days, weren't they?"
Played by: Jordan Byrne

One of the four mafia dons and Mario's Arch-Enemy, but as he says, days like these are no longer fit for old fashion brawlers like Mario and him, so he has grown apathetic, losing interest in villainy. Now he only cares about enforcing order among the Koopas.

Played by: A Styrofoam Head

One of the four mob bosses who run the Mushroom City's streets—until his untimely death. The police found his internal organs stuffed into a Pokeball. Ouch. Mewtwo was apparently a ruthless mafia don who nonetheless cared for his fellow Pokemon. In the final episode, we learn that in response to Kirby's rampage, Mewtwo tried to create a psychic army by experimenting on orphaned children. Two of his creations, Ness and Lucas, fell under Ganon's thrall.

They first appeared kidnapping Luigi for Ganondorf, and later as bouncers in Dedede's bar covering the whorehouse. Mario nearly kills Donkey Kong in a rage when he sees the ape with his former girlfriend, Pauline. Diddy tries to kill Mario in the final brawl, but ultimately puts it behind him.

"Wave of future! Everyone having one!" (Regarding Landmasters)
Played by: Joel Geist (Fox), Chris Fleischman (Falco), and Mischa Pollack (Wolf)

Three bandits wandering around the dark alleys. They easily scream trouble from a mile away.

Both Canon Immigrants appear depicted as homeless and crippled, surviving however they can around dark alleys, and seem to be look after one another in order to survive any hardship that comes their way. 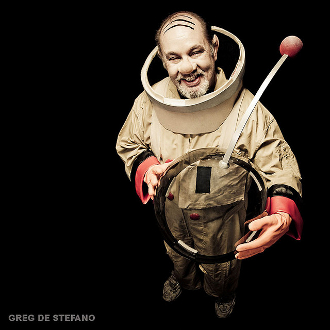 "We must have... sacrifice!"
Played by: Palmer Scott

Known as "End of Days", and damn insane. His actions and lines are the creepiest, his motives incomprehensible. If he's present, expect something nasty to happen.

Played by: A Computer

Usually black (but also seen of other colors) 2-dimensional beings seen around the Mushroom Kingdom, usually in minor roles. It's unclear if they're separate beings or if they share a Hive Mind.

Two little kids seen around the alley at one point, serving as Luigi's inspiration for going on fighting.

Ness and Lucas are revealed to actually be the butchers, endowed with Psychic Powers from Mewtwo's experiments and taken in by Ganondorf—and, later, Kirby. They are able to kill by using their powers to rip the organs right out of their victim's bodies (also using a snake and baseball bat for more damage) and you don't even want to know what they do to the bodies afterward. 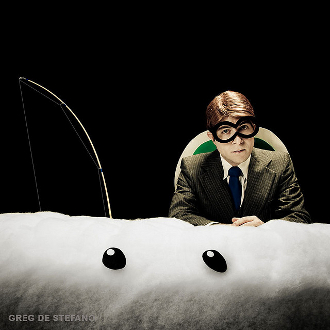 "Fuck it, we'll do it live!"
Played by: Jordan Krain

The popular Koopa anchorman of Channel 8 News, Lakitu hasn't given up his ties to the mafia. He uses his position to influence public opinion against the Mario Brothers.