Characters / The Witch and the Hundred Knight

The cast of The Witch and the Hundred Knight. Beware of unmarked spoilers. 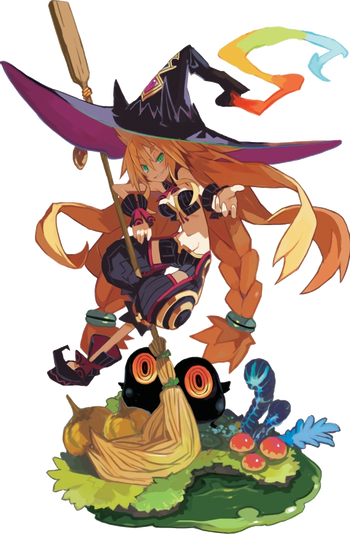 The titular witch and protagonist. A foul-mouthed girl who wishes to cover the whole world in a swamp to claim as her dominion before she dies in 100 days.

An ancient demon of legend who is said to be a very powerful, though in truth it's just a small little knight with some hidden potential. 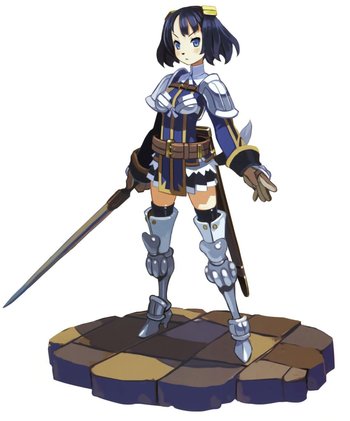 A young Inquisitor and the Princess of Amataya Kingdom. She mistakes Metallia for Malia, and asks her for help in lifting a curse that has given her the tail and nose of a dog. 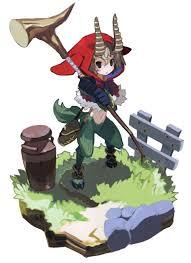 A young goat-like beastman that Metallia encounters in the Tettara Desert while searching for a Bell Plant. He is fascinated with Witches and wants to be Metallia's apprentice.

A Swamp Fairy that befriended Metallia when she was very young. In reality, she is the reborn form of Niike's maiden, Aguni.

Metallia's rival and mother-via-magic-seed, who owns a larger portion of land than she does and has been fighting her for 100 years.

A Great Witch, known by some as The Duchess of Flowers. Metallia picks a fight with her because her territory begins to encroach on Metallia's swampland.

The current head of the Great Witches at Walpurgis, and widely considered to be the most powerful.

An elderly Witch that Metallia used to live with when she was a child.

The true Duchess of Flowers.

Purple Peel's apprentice and the newly appointed Fire Witch. Most of the characters call her Lavi.

A witch that has been mistaken for an evil spirit, and is "haunting" Cicite Battlefield, near the capital of Amataya.

A rather fat and lonely merman shaman. Metallia seeks him out when she becomes dangerously ill.

A large roach-like insect that comes to Metallia for help in "supporting her prince". She's actually a Witch whose soul has been overwhelmed by dark magic, and is slowly transforming into a Dark Witch.
Wedge and Biggs

Two knights that serve under Visco and accompany her on her trip to meet with Malia. They harbor no loyalty to Visco whatsoever, and both end up being killed in the forest trying to abandon her.

Visco's loyal squire, who accompanies her on her trip to meet with Malia.

A well loved and handsome young nobleman, and the adopted son of Lord Damuu. He is currently courting Princess Hilda with the intent of marrying her.

The head of the Church of Niike (and by extension the Inquisitors) and a prominent Figure in Amataya's politics. He is Heintz and Jack's adoptive father.

The true Hundred Knight. An ancient dimension-travelling eldritch horror that once threatened the world. Though it was defeated long ago, the witches who fought against it could only seal it away. And now the seals are weakening...

An alternate version of Metallia. Unlike Metallia, Lia doesn't seem to be confined to her swamp. She seeks to reach the top of the Tower of Illusions.

The alternate counterpart to Medea's Visco, she is a knight who gained her dog-like features during the king's mad attempt to execute all dogs. She nervously enters the Tower of Illusions in order to wish for a cure to become a human again.

The alternate counterpart to Medea's Arlecchino. He is a golem who remained in the Tower of Illusions under orders from his previous master. He, unfortunately, lost his body during a scuffle with monsters and has remained headless for a long time until meeting Lia.

The alternate counterpart to Medea's Lucchini. A beastman who traveled to the Tower of Illusions to meet witches and gain the power to defend himself from humans.