Characters that debuted in Season Three of The Walking Dead video game:

Character Index | Playable Characters (Clementine) | Season One Characters | 400 Days and Season Two Characters | Michonne Characters | A New Frontier Characters | The Final Season Characters
Due to wiki policy, trope names and character descriptions will not be spoiler tagged. As such, expect many unmarked spoilers below for previous seasons!

Also, due to heavy reliance on Walking Spoiler at the end of Episode 2/"Ties That Bind - Part 2", browse through at your own risk. 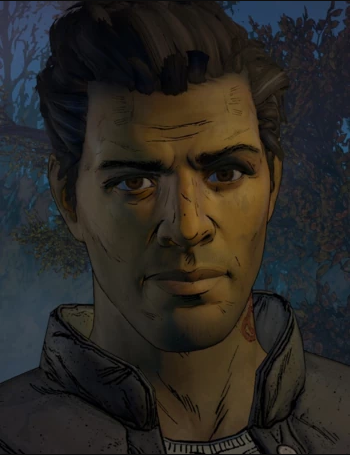 Voiced by: Alex Hernandez
"A soldier isn't a husband, or a father. A soldier is a soldier - nothing else."

Javi's brother, Kate's husband, and Gabe and Mari's father. David was an army veteran who had a strained relationship with his brother. He was presumed dead by his family after leaving to take his bitten mother to the hospital but not returning, before reuniting with them as a leader of the New Frontier. 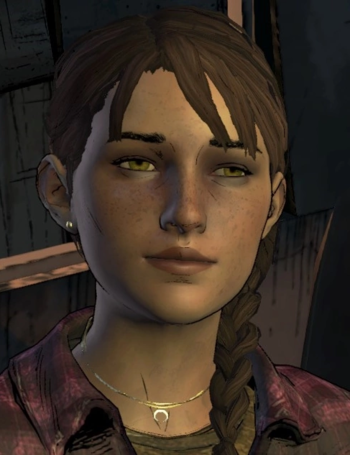 Voiced by: Shelly Shenoy
"It's hard to say no to a fresh start..."

David's wife, Javier's sister-in-law, and Gabe and Mari's stepmother. After David went missing in the first days of the outbreak, Kate has become the caretaker of her stepchildren alongside Javi. 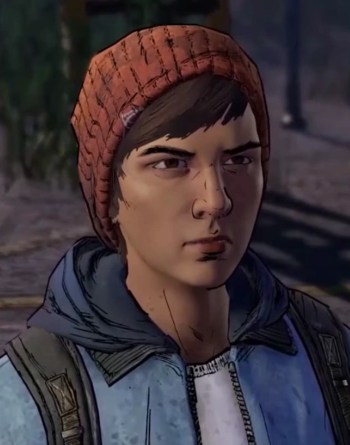 Voiced by: Raymond Ochoa
"I'm sick of feeling like this, feeling powerless! Next time, I'm not gonna sit back and watch. I'm gonna do something. I have to."

David's son, Kate's stepson, Javier's nephew, and Mari's brother. Gabe is currently going through puberty, with all the emotional turmoil that entails. 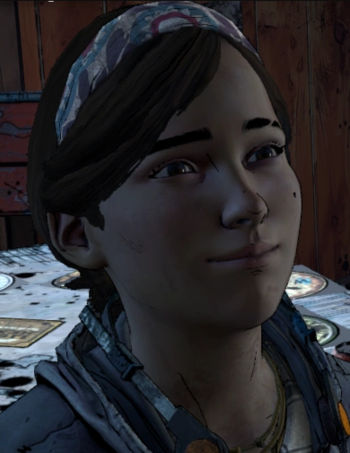 Voiced by: Tony Chiroldes
Javier and David's father, who died of terminal cancer and reanimated as a Walker at the beginning of the outbreak.
Mrs. Garcia

The wife of Salvador and mother of Javi and David. She gets bitten by her dead husband and died during the early days of the outbreak.

Salvador's brother and Javi and David's uncle. He is bitten on the arm during the initial outbreak and disappears from the story afterwards. 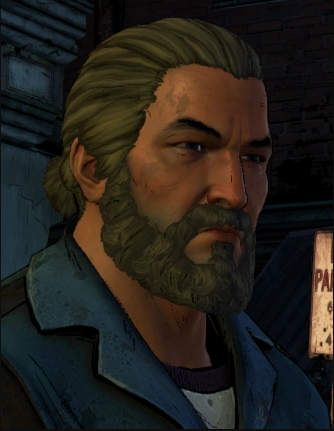 The lawman in Prescott. He used to date Eleanor and is overprotective of her. 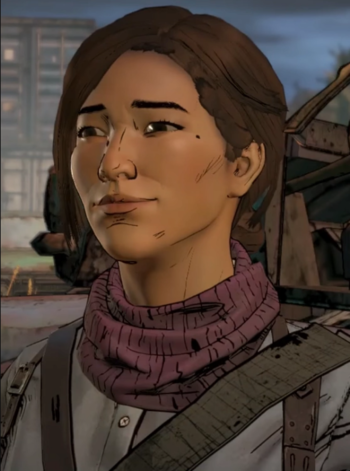 Voiced by: Kelley Crowder
"I was triaging a bad situation. Their doctor is dead. And before you fucked it up, their walls worked."

The doctor in Prescott. She used to date Tripp. 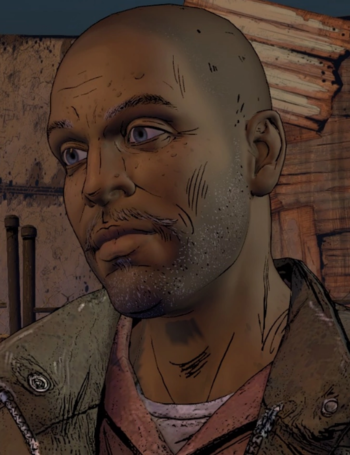 Voiced by: William C. Stephens
"I really was heading out, but... something made me turn back. Good thing I did, huh?"

The bartender in Prescott. He and Francine are married lovers. 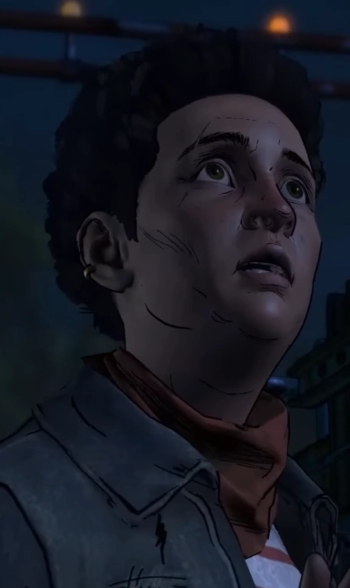 Voiced by: Valerie Arem
"Yeah, and when that happens, I promise I'll eat you first."

An adventurous resident of Prescott. She and Conrad are married lovers. Unfortunately, she becomes a tragic victim of circumstance. 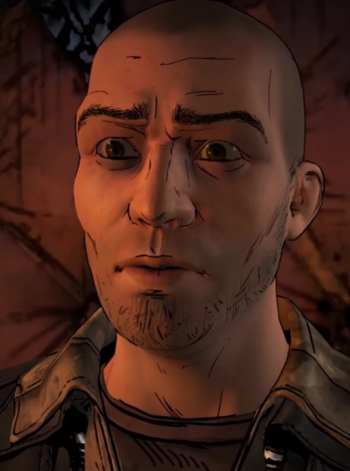 A shady man who lives in Prescott who sold Clementine a shoddy box of bullets that almost get her and Javier killed. 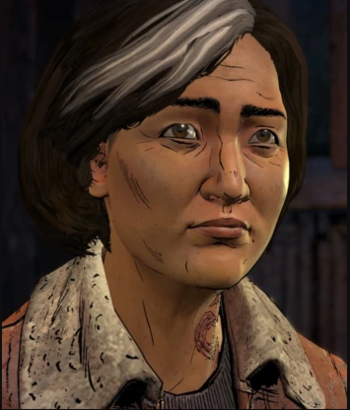 "I can do whatever I want! You brought this on yourself! Do it!"

One of the four people in charge of the New Frontier.

Voiced by: Yuri Lowenthal
"You can consider the deal off."

One of the four leaders of the New Frontier, and the Head of Medicine for the community.

One of the four leaders of the the New Frontier, Clint is the Head of Rations and Food. 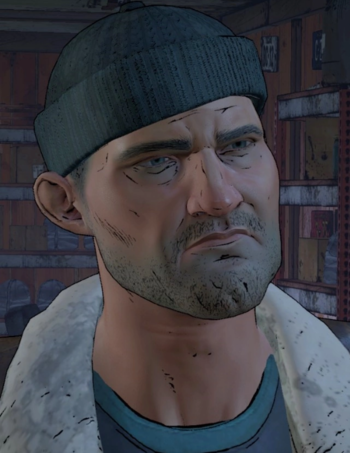 Voiced by: Sean Lynch
"Sounds like a bunch of he-said, she-said shit to me!"

A commander in the New Frontier. He's one of the more reasonable members, but he still has a volatile temperament. 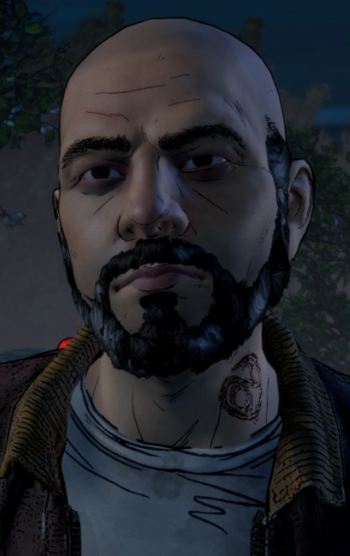 Voiced by: Jon Curry
"If I'd known you were David's brother... I'd have shoved that gas can down your throat and lit you up like a candle."

A violent commander in the New Frontier. 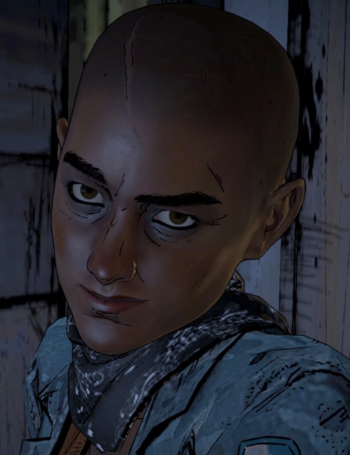 Played by: Ally Johnson
"Promise me you'll never lose that light. Please... It's what makes you special, Clem. It's what keeps the rest of us going."

A young woman Clementine meets while trapped inside a small house in the woods. Once the two get to talking she reveals that she belongs to a bigger group called The New Frontier and wants Clementine to join them. Episode 2 reveals that Clem took her up on the offer.

"We did that. Raided those communities. Hurt those people... because David told us to. Not Joan. I'm sorry, David. I can't do this anymore. I can't hurt anyone else."

A soldier in the New Frontier that first encounters Javier's group in episode 1 under Max's command. He is later revealed to be one of Joan's raiders and will side with her during the confrontation scene near the end of episode 3 and blame David for the leader's actions, possibly resulting in his death.

"'Course I remember. It's why I haven't shot you already! That's how I'm helping you!"

A soldier in the New Frontier who is first encountered as a part of Max's squad. After being ambushed on the road by Clementine he is either shot dead by Javi or allowed to escape, in which case he'll reappear later in the story.

"We're all fucking dead because of you! You blew a hole in our wall! Got my little girl killed! Got my whole fucking family killed! Richmond was fine until your stupid ass showed up!"

A member of the New Frontier who is one of the guard stationed at Richmond. Episode 5 reveals that she is married to Rufus and had a little girl named Ida who was killed in the walker attack at the end of episode 4. 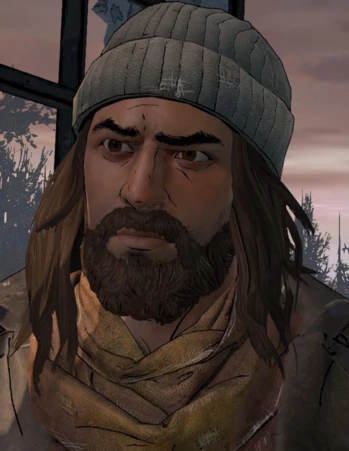 Voiced by: Brandon Keener
"I read people pretty well, little gift of mine. You're a capable guy, Javi. Change is in the air here, you can lead that change, and I think you should, for the better."

A strange but skilled survivor that Javi's group finds while en route to Richmond. Click here for more information on him.