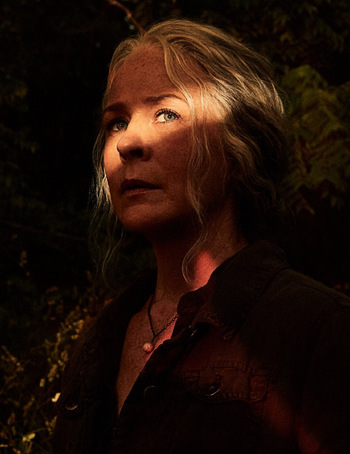 "If you want to live, you have to become strong."

One of the main protagonists of The Walking Dead, who has enough examples of tropes to qualify for her own page.

After suffering through a lengthy, abusive marriage with her husband Ed, who was also abusive to their daughter Sophia and had began to eye her in a non-fatherly way, she survived the initial stages of the zombie apocalypse with her family. After becoming close companions with the Grimes family, Ed was killed during the walker attack on the camp. After that, Carol became more independent, but the disappearance and later death of her daughter demoralized her again. However, she has since recovered and started becoming more assertive, taking a larger role in the group as both as shooter and medic. Carol has also established a strong friendship with Daryl and began to deeply care about him after he went out of his way in his search for the missing Sophia in Season 2.

After the community in the prison was established, Carol became a member of the council that helped run the group. She was exiled by Rick after killing some of the group in a desperate attempt to stop a plague, and her actions then and later with Lizzie and Mika haunt her to this day. Carol returns to the group just in time to save them from the cannibals of Terminus, mounting a one-woman assault on the compound and earning back Rick's trust. Upon reintegrating into the group, she becomes one of Rick's closest family members and one of his main advisors as they reach Alexandria, often advising the more ruthless course of action to protect their family.

Despite having trouble facing her own demons, Carol is one of the most changed survivors of the apocalypse. She has proven to be a shrewd tactician whose no-nonsense approach to things makes her a finely oiled killing machine in combat. Given her Mama Bear feelings towards the group, you have what even Rick calls a "force of nature" who will do anything to save or protect her own. Carol is also a brilliant schemer who effortlessly dupes the entirety of Alexandria, hiding her true nature under an innocent, incompetent Stepford wife persona who is more than a few steps ahead of anyone. Carol is forced to abandon her disguise when Alexandria comes under attack. She develops a feud with Morgan over their contrasting ideologies, and exiles herself when regret from her actions convinces her that she has begun doing more harm than good. Carol begins attempting to live a solitary life on the outskirts of the Kingdom, but upon learning of the deaths of Glenn, Abraham, and several others at the hands of the Saviors, she realizes she cannot hide from their brutality and joins the war against Negan.

After the war, Carol finds love with Ezekiel, marrying him and enjoying a happy new family life with him and their adopted son Henry. Six years after the apparent death of Rick, the Kingdom is on the verge of collapse, and Carol helps plan the fair intended to revive the community and rebuild the relationship between the others. Tragically, Henry ends up as one of Alpha’s victims in a massacre, and the grief drives her and Ezekiel apart as the Kingdom falls into disrepair.