Characters / The Venture Bros. The Guild

The Weird Trade Union governing nearly all super-villains in the United States. 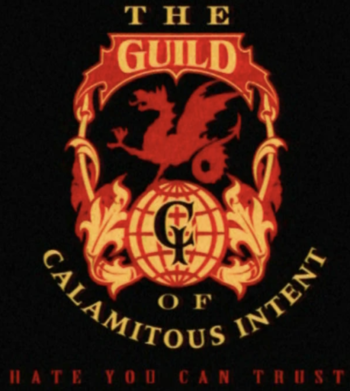 Original Incarnation
The Guild of Calamitous Intent was not always such. It was originally an organization of Victorian-era geniuses headed by Colonel Lloyd Venture. It was Fantômas who ultimately created the Guild as it is today.

Voiced by: Christopher McCulloch (As the Sovereign Head), James Urbaniak (As Bowie)
"Pay no attention to the handsome and ageless rock star hiding behind the couch! I am the mighty Sovereign!"

The enigmatic leader of the Guild, who just happens to be none other than David Bowie. Or really, a shapeshifter impersonating Bowie. 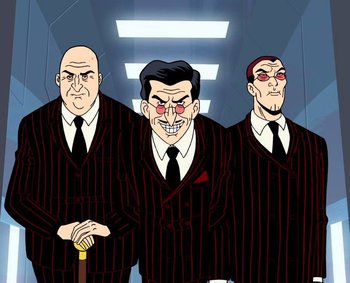 Three amazingly creepy men in suits. They exist to make deals with people. The deals frequently end badly for the person who makes them.

Dr. Mrs. The Monarch
See her entry on the Monarch and Cohorts page.
Phantom Limb 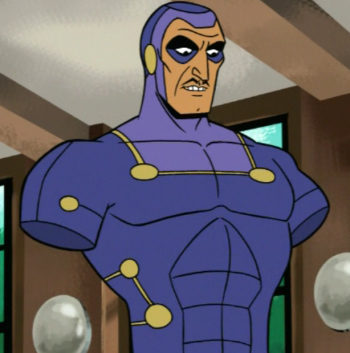 Voiced by: James Urbaniak
"No one retires from the Phantom Limb's shit list!"

Hamilton Fantomas is the grandson of the adventurer and Guild founder Fantômas. Born with atrophied limbs, his attempts to speed up their muscle growth instead gave him invisible hands that could kill with a touch. He eventually worked his way up in the Guild, always with an eye on the Sovereign's position. Dr. Girlfriend used to work with him and date him as Queen Etherea before meeting the Monarch; she goes back to him in season two, securing his position as the Big Bad of that season. After she leaves him and marries the Monarch, Phantom Limb loses his grip on reality and forms his own rival supervillain group known as the Revenge Society, while also trying to take over the Guild regardless. After taking more people into the Revenge Society, he tries to eliminate the Investors for the Sovereign to gain entry onto the Council of Thirteen but is double- or perhaps triple-crossed. In the end, Dr. Killinger makes him a member of the new Council of Thirteen after the Sovereign's death. 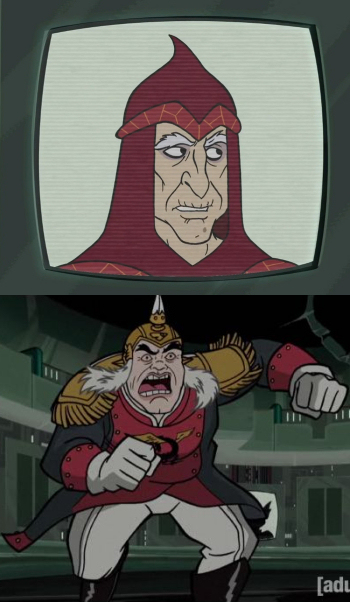 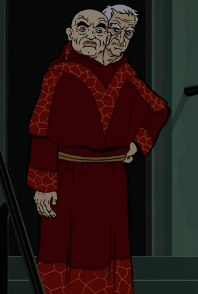 Red Mantle voiced by: Doc Hammer
Dragoon voiced by: Christopher McCulloch
Red Mantle: Two heads are better than one!
Dragoon: What does that have to do with anything?
Red Mantle: Nothing, I've just been wanting to say that all day. I got sick of waiting for an opportunity.

Two members of the Guild's Council of Thirteen, they moved into the spotlight in season four. They have spent decades in the Guild headquarters, leaving both of them out-of-touch with the outside world. After a near-fatal encounter with Phantom Limb, Dragoon's life was saved when Billy Quizboy attached his head to Red Mantle's shoulder. 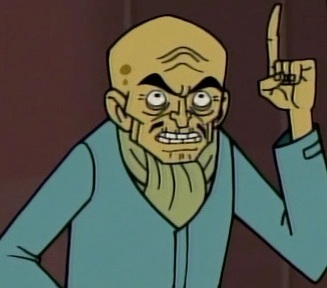 Much like Action Johnny, Dr. Z is an obvious stand-in for Jonny Quest's Dr. Zin. However, 40 years on, Dr. Z has retired from professional supervillainy and no longer arches Action Johnny. He has since settled down and married, and he even adopts the permanently young boy adventurer Ro-Boy. However, he is still an active member of the Guild of Calamitous Intent, serving as one of the Council of 13. 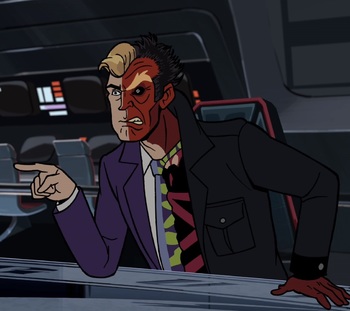 A former inmate at Dunwich Asylum, and former member of the Revenge Society. After the destruction of Gargantua-2, and the dissolution of the Society, he joined the Guild as a member of the Council of Thirteen. 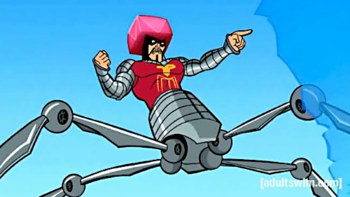 A virus-themed villain and former arch for Professor Impossible. Also an on-again-off-again member of the Council. 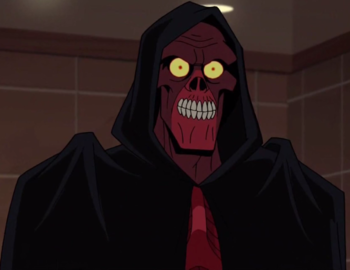 Another of Wide Wale's subcontracting archvillains for Dr. Venture. He's infamous within the Guild for his powers and viciousness, but that's simply his public persona. The rest of the time, he's a normal family man. One who appears to be a red skeleton with the ability to vaporize anyone in his way. By Season 7, he's gained a seat on the Council.

The other former members of the Council of Thirteen before the Sovereign's purge, most of whom were killed in the process. Membership: 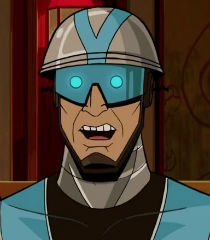 Previously, Councilman 1 of the Guild, Brock Samson and the OSI try to manipulate him into giving up information on the Guild. His whereabouts afterwards were unknown and his seat on the Council was given away. For more information, see The Blue Morpho. 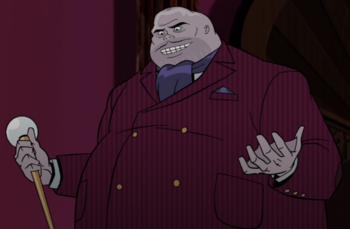 Formerly Chester Ong, now a supervillain from New York City who lives in a penthouse apartment across the way from Ventech Tower. He is made the newest member of the Council of Thirteen in exchange for one favor from Dr. Mrs. The Monarch: exclusive arching rights to Dr. Thaddeus Venture. In Season 7, he decides to resign his membership on the Council when he realizes he wouldn't be permitted to keep arching and still has old grudges he's not ready to give up on. 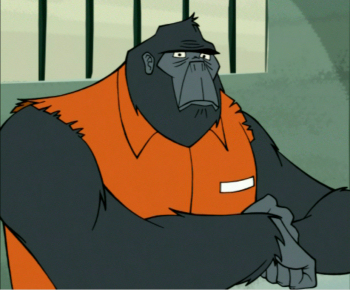 Voiced by: Christopher McCulloch
Monarch: "Oh this isn't gay. But King Gorilla over there is! And I bet he can't wait to snap off a piece of your dick in his ***!"
King Gorilla: (Kissy lips.)

A tough old talking gorilla who served time in prison alongside The Monarch. He made a deal with the Investors to donate his heart to Monstroso when he dies in exchange for getting out on his life sentence. 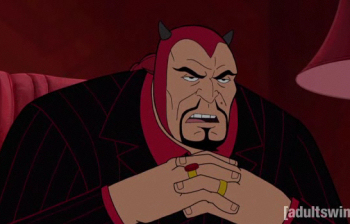 Voiced by: Christopher McCulloch
Dr. Girlfriend: "Monstroso? That's what this is about? He's the king of the double cross. I mean, think about it, he's a lawyer and a supervillain. That's like a shark with a grenade launcher on its head."

An influential supervillain and lawyer. The Monarch tries to team up with him to screw over Venture at the season four midpoint. This ends about as well as you'd expect (remember, this is a show about failure). Captured by the OSI during Season 5, and (possibly) killed by the Investors as an anti-snitching measure. 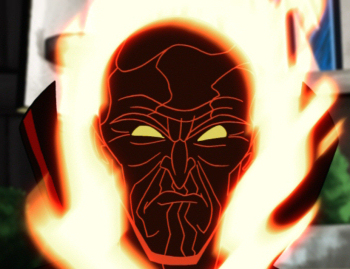 Voiced by: Christopher McCulloch
"Save my place in the queue. There's something I feel I must do. Something torrid."

The Order of the Triad's Guild-sanctioned archenemy, who has a fire theme. 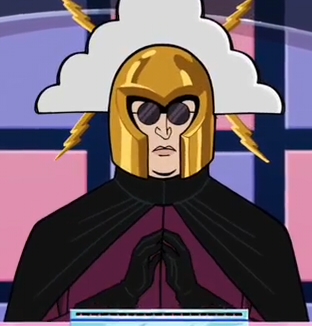 Voiced by: James Urbaniak (Season 1), Christopher McCulloch (Season 5 and Onward)
"You win this time, but mark my words, and mark them well: I will get you, Quiz Boy!"

The newest member of the Guild of Calamitous Intent as of the Season 5 premiere, who specifically joins to arch Billy Quiz Boy. He is also incredibly rich and is a collector and fanboy of antiques from movies and TV shows. 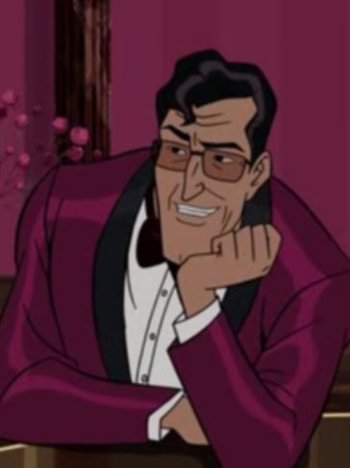 Voiced by: Toby Huss
A supervillain and entertainer with a 1950s "cool-cat" demeanor. He has the superpower to make duplicates of himself and he has the desire to join the new Council of Thirteen.
Tunnel Vision
Voiced by: Hal Lublin
Presto Change-O
Voiced by: Mark Hamill
Dot Comm
Voiced by: Annie Savage
"Driver X"
Voiced by: None
Turnbuckle
Voiced by: Paul F. Tompkins
A boxing-themed villain who decided to try and arch Jonas Venture. His subsequent brutal death is responsible for the entire villain levels system of the Guild.

The various members that Wide Wale hired as a result of a Guild bylaw that allowed him to subcontract his arching of Dr. Venture to other super-villains. 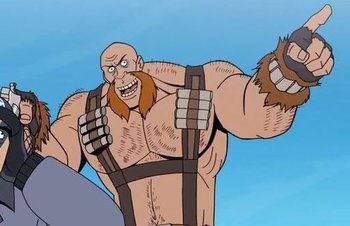 An Irish-American supervillain who may or may not be part simian. All he really does is harass and bother Dr. Venture, Brock, and Hatred. Killed in action when Dr. Venture's "god gas" experiment goes awry, The Monarch and 21 as the Blue Morpho and Kano arrive, and 21 accidentally kills him by punching him such that he falls into a massive hole in the ground floor caused by Wide Wale's last direct attempt at arching Dr. Venture. 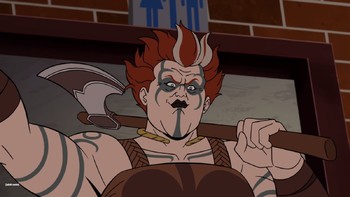 Haranguetan's wife. She presses Dr. Mrs. The Monarch to help her regain the Haranguetank, an RV that serves as her home with Haranguetan. She uncovers the camera footage on Dr. Mrs. The Monarch's computer that suggests that Dr. Venture killed her husband as the Blue Morpho and drives the Haranguetank to kill him, but swerves out of the way to avoid crashing into Hank and Dean and ends up in the hole in Ventech's ground floor like her husband. Along with Think Tank. She survives. Think Tank however ends up in a coma. 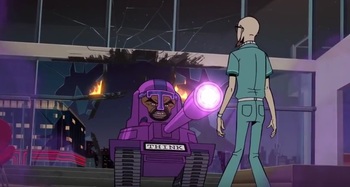 Think Tank is Dr. Nidaba, Dean's philosophy professor at Stuyvesant University. He has psychic powers and drives around in a purple tank. Battleaxe accidentally runs him down in the Haranguetank after she loses control when avoiding Hank and Dean. Season 7 shows him alive, but comatose. 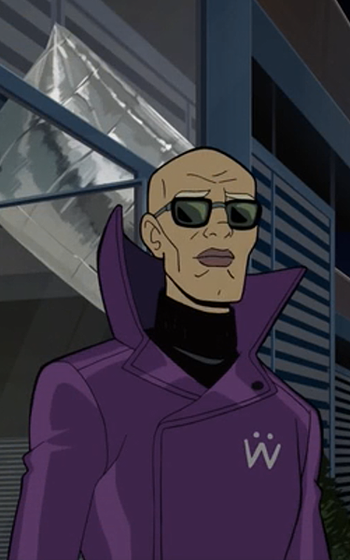 Wes Warhammer
The latest group of supervillains to take a stab at arching Dr. Venture led by Wes Warhammer. Other members are Frigid, Serpentine, Eenie-Meanie, Gerard the Gorilla, Trashenstein, Black Mariah, Ultra-Violent, Billy Maim, She-Hemoth, and Hard Candy. The Monarch/Blue Morpho filled their headquarters with explosives but when he originally sets them off, they are all apparently duds. When the headquarters goes to pick up the members at Ventech tower after they've robbed Dr. Venture blind, the Blue Morpho falls out (having gotten stuck during his escape earlier) and drops the detonator onto the pool deck, leading all of the bombs to explode, killing the entirety of the Doom Factory.
Wandering Spider 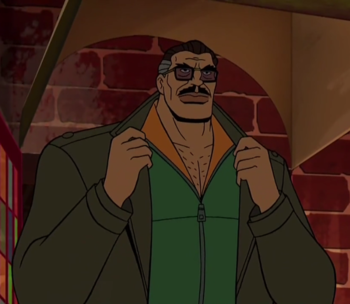 The next in line to arch Dr. Venture under Wide Wale's command. To cover up his identity as The Blue Morpho, The Monarch has 21 kidnap him in his place while he arches Dr. Heiney. His final fate is not made clear. The Monarch ordered 21 to execute him, but 21 has been suffering from guilt and PTSD after having accidentally murdered Haranguetan. All we see in the end is 21 burying Wandering Spider's mechanical spider legs in the New Jersey Pine Barrens. 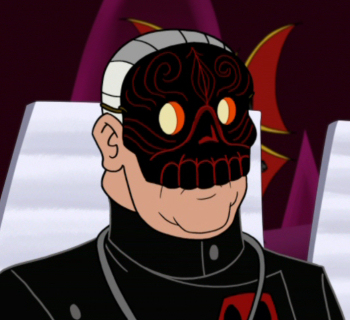 Voiced by: Christopher McCulloch
"Killinger. Dr. Henry Killinger. And this is my Magic Murder Bag."
The Mary Poppins of evil. He seeks to help others find their true purpose and fulfillment in life. He has a Magic Murder Bag.
Watch and Ward 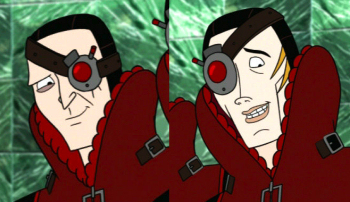 Voiced by: Christopher McCulloch (Watch) and Doc Hammer (Ward)
Phantom Limb: ...Very well, but you may have to give me the shot in my derriere. Needles can't penetrate my electro-impalpable limbs!
Watch: Yeah, 'needles'. Good one. Try Giant Metal Spikes.
Ward: They're wonderful and frightening and they go in through your neck and they replace all your blood!
Watch: You get your blood back at the end of the summit, unless that 'loss of life' thing happens. Then we send your next of kin a big jar of blood and a very nice card.

High-ranking Guild dispatch (Watch) and communications (Ward) officers, who report directly to the Sovereign. They're fairly good at their jobs, when not distracted by inconsequential matters, be they misplaced juice boxes or mp3 selection. 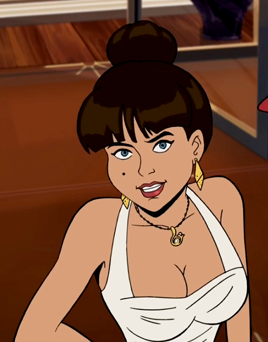 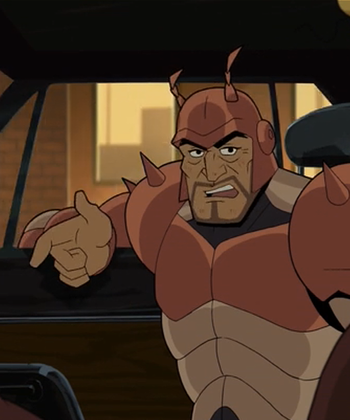 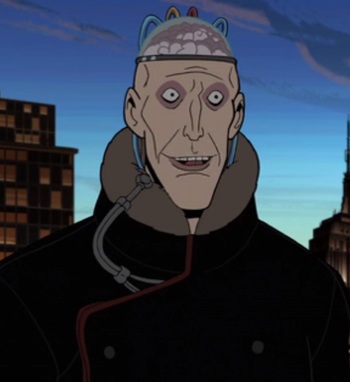 A Guild Stranger. In place of part of his skull, he has a plastic dome on his head with tubes coming out of it. Also a mole from the Guild's Canadian rivals, the Peril Partnership.