Characters from The Venture Bros.. This page is for the current and ex-members of the OSI.

The Office of Secret Intelligence, the US government agency which stands in opposition to the Guild of Calamitous Intent. OSI headquarters is a Global Airship that houses more than two thousand crew, and is almost always on the move. During season 4, most of the OSI members that were (or became) main cast members had defected and joined SPHINX, a terrorist organization they had eliminated in the 1980s which they turned into a vigilante group to deal with supervillains not affiliated with the Guild. By the end of the fourth season, General Treister appointed a reluctant Hunter Gathers as the new leader of OSI, just before Treister launched himself into space. As of season 5 Gathers' has taken to the job and taken all of his SPHINX with him, barring Gary. This section includes past and present OSI members, excepting those who have left and joined other organizations.

"Lesson number one: trust no one! The minute God crapped out the third caveman, a conspiracy was hatched against one of them!"
Voiced by: Christopher McCulloch 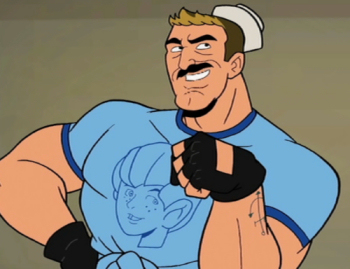 Voiced by: Doc Hammer
"Nooo, no. That's not my gun. That's an indicator of how excited I am to do this to you. That [holds his gun up] is my gun."

An ex-OSI operative kicked out on a Don't Ask, Don't Tell violation, Shore-Leave claims to have exorcised the "demons of homosexuality" and turned to God. He and his Heterosexual Life Partner Sky Pilot run a Bible camp for kids and dress up as the Christian superheroes "The Soul Mates."

In fact, the religious conversion was a cover story; Shore-Leave is one of the top agents in Hunter Gathers' SPHINX organization. He becomes Brock Samson's partner on missions and The Alchemist's outside of them. 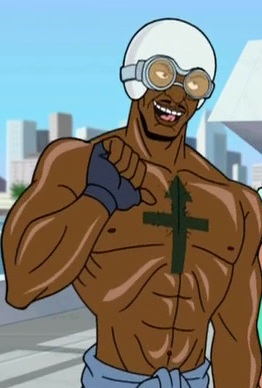 Another former OSI agent, kicked out alongside Shore-Leave, who ended up being part of Hunter's SPHINX group as well. Doesn't play as active a role in the series as his former partner. Most of the same tropes associated with Shore-Leave (in relation to religion and the defection, at least) are shared by Mile-High. 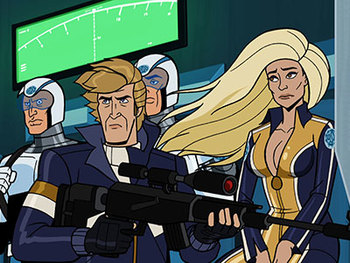 An OSI Couple introduced during the capture of Monstroso and Molotov Cocktease. 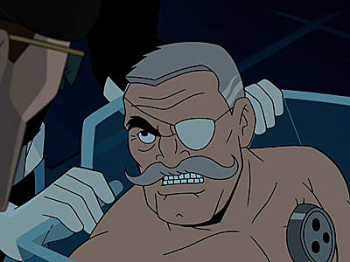 Voiced By: Toby Huss
"Well, while your head is up there, can you take a look at my prostate? Daddy fears the can-cer."

The former head of the OSI and apparently its founder. He's a Crazy Awesome badass. Or at least he was, until he launched his body unprotected into space, with a note asking aliens to cure his prostate cancer. 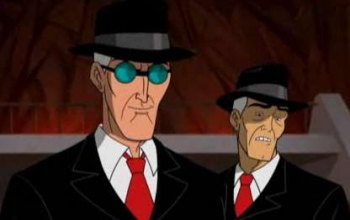 High ranking members of the OSI who serve as Treister's top men. 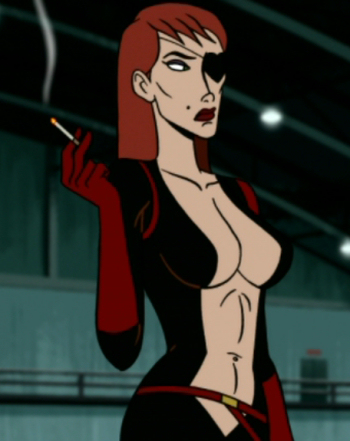 Voiced By: Mia Baron
"If I were the enemy, you would be dead."

Molotov is a former agent of an unnamed Soviet intelligence organization who turned mercenary after the Cold War. She is the love of Brock Samson's life, despite the fact that a titanium steel chastity belt and a promise to her deceased father prevent their full carnal union. Before she was a secret agent she was an Olympic athlete representing the Soviet Union. Her father and trainer was an undercover Soviet assassin. 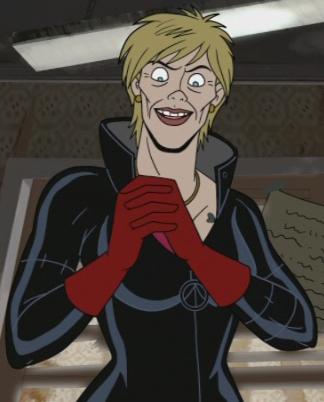 A former OSI agent. She was at one point Dr. Venture's personal body guard and one time lover. Claims to be Hank and Dean's mother, though whether or not this is true is yet to be made certain. Brock claims she was a former member of the American Gladiators who was thrown into an insane asylum after becoming criminally obsessed with Dr. Venture. Every few years she breaks out of the asylum and kidnaps the Venture brothers. 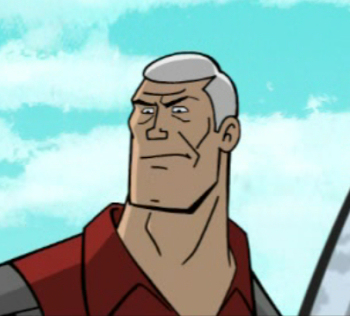 The original bodyguard of the Quest family from Jonny Quest, whom the character Brock Samson was designed to parody. In The Venture Bros., Race was an OSI agent who also knew Brock. Race was killed off quickly after his first appearance in the show, but appeared again later in the series in Flashbacks.

An OSI Mook in a relationship with a Guild Stranger.