open/close all folders
The Narrator 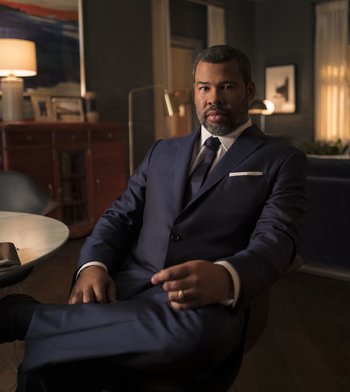 "Your next stop? The Twilight Zone."
An omniscient man who narrates the stories of the main characters.
The Comedian

A man who aspires to be a comedian, but his material doesn't get the laughs he expects, and he doesn't understand why. When he meets his idol JC who gives him pointers on "putting himself out there", he would gets laughs back. He agrees to this, and soon his jokes have the house roaring with laughter, but at a price.

An investigative reporter who goes on a flight 1015 on October 15. However, during the flight he finds a strange mp3 player playing a podcast retelling the tragic flight of 1015 and how the plane mysteriously vanishes off the radar with the host speculating on what could have been done to avoid this fate. This causes Justin to try his best to stop this tragedy from happening.
Replay

A single mother going with her son to see him off to college, and avoids talking about her past or letting her son meet any of his relatives. However, after a cop shoots her son, her old camera recorder allows her to go back through time to save her son and maybe confront her past.

A police sergeant for the Iglaak Sheriff's Department. Yuka is a shrewd and alert officer, becoming instantly suspicious of the enigmatic stranger who her complacent and casually insensitive Captain insists on letting out of his holding cell.

A mysterious man in a nice suit who shows up in the holding cell of the Iglaak Police Department on Christmas Eve, asking to be pardoned by Captain Pendleton. He is a lot more than he appears to be.

Chief of the police station, who always pardons someone on Christmas Eve. His decision to pardon A. Traveller does not go well for anyone.—-
The Wunderkind