This page is for the original literary works by Alexandre Dumas only. Please place character tropes and actors associated with the various adaptations on their respective pages and add them in the index below if necessary.

For an index of the actors and actresses from Three Musketeers media who have their own page on this wiki, see here.

open/close all folders
The Musketeers 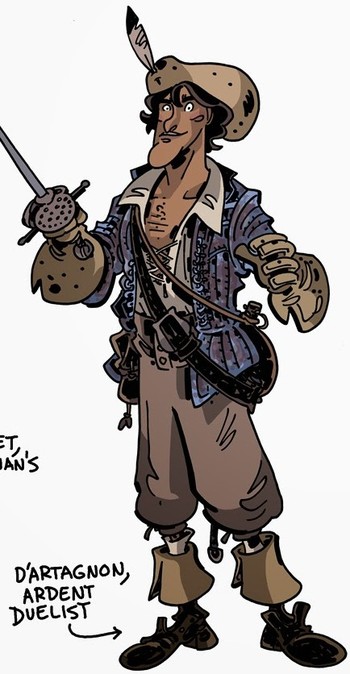 A young man from Gascony who leaves his family to join the King's Musketeers. He ends up becoming friends with the Three Musketeers and soon joins them on their various adventures and becomes involved with the intrigues of the royal court. 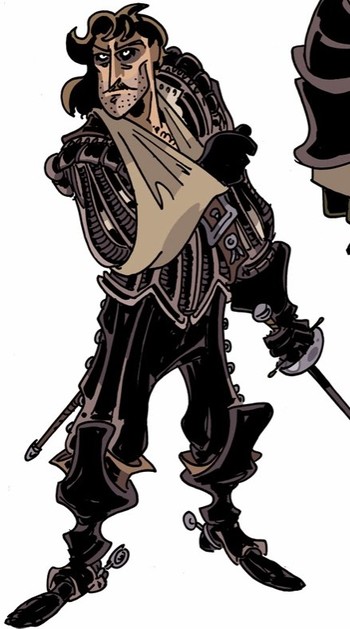 The oldest of the Musketeers. He is melancholy and stoic yet becomes a sort of father figure to d'Artagnan. He is actually a nobleman and was married to Milady de Winter yet tried (and failed) to hang her after he discovered that she was branded as a thief. He has a son named Raoul in the later books who he is very fond of. 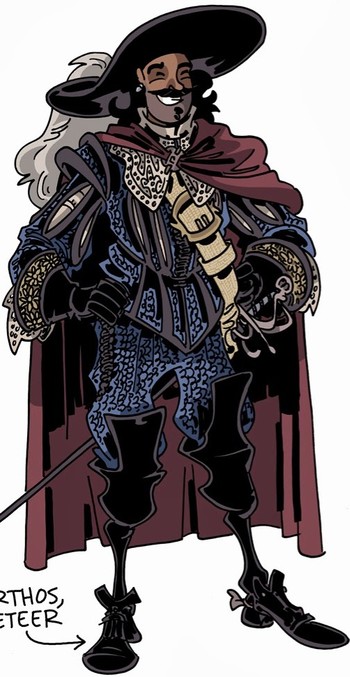 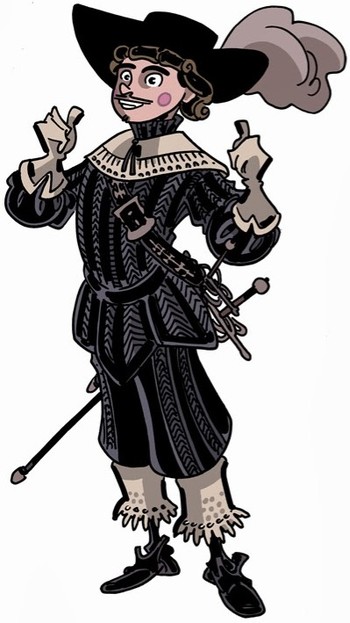 The last of the Musketeers, Aramis originally intended to join the priesthood but ended up as a soldier after he got into a fight with another man. He is scholarly and provides common sense for the other three. In the later books he does become a priest and then later Bishop of Vannes. He also attempts to have Louis XIV replaced with his identical twin brother. 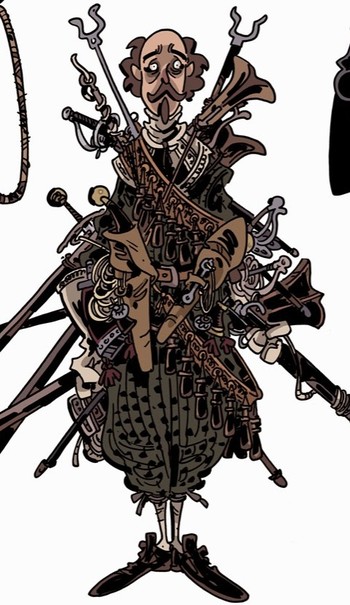 Athos' valet. Athos ordered Grimaud to speak only in emergencies, and he generally only communicates through sign language. 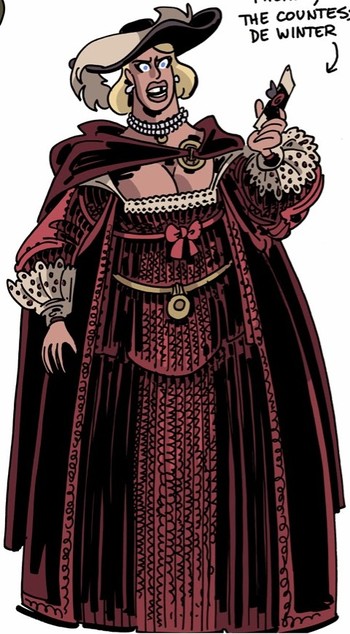 A seductive spy who works for Cardinal Richelieu. She is involved in first the plot with the Queen's diamonds and then in the assassination attempt on the Duke of Buckingham. She turns out to be Athos' wife who he thought was dead.

D'Artagnan's Love Interest and the Queen's servant who is involved in affair with the Duke of Buckingham. She is also married to Monsieur Bonacieux. 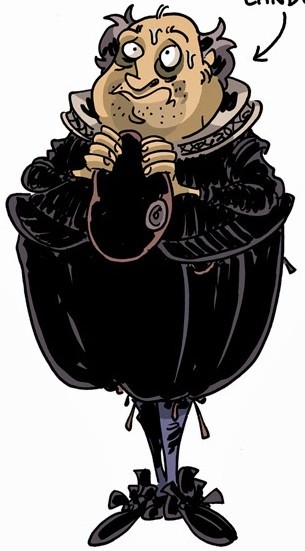 D'Artagnan's landlord and the husband of his Love Interest Constance. He gets recruited by the Cardinal who sends him to spy after them.

An agent of Cardinal Richelieu who mocks d'Artagnan's horse and steals his letter at the beginning of the book. He keeps reappearing throughout the novel to make trouble for the Musketeers.

The scheming minister of Louis XIII who plans to expose the Queen's involvement with the Duke of Buckingham. He organizes the death of Buckingham for the greater good of France. Richelieu is of course an historical figure; the franchise established his fame as a Chessmaster/Sinister Minister Anti-Villain, but the historical Richelieu earned it.

Jules Mazarin, the prime minister of France during Twenty Years After and the start of Le Vicomte de Bragelonne. Unlike his predecessor Richelieu, he's disliked by almost everyone for his policies and for being an Italian running France in all but full authority, leading to the main conflict in the second book.

The capricious King of France in the first book who wages war against the Protestants at La Rochelle and suspects that his wife is having an affair with the Duke of Buckingham.

The Queen of France. She is suspected of having an affair with Buckingham and is nearly brought down by Milady and the Cardinal. After Louis XIII's death, she becomes Queen Regent for her son Louis XIV, ruling jointly with Cardinal Mazarin (who she also marries secretly).

George Villiers, the Duke of Buckingham

The first minister of England who aids the Protestants at La Rochelle. He woos Anne of Austria and, as such, jeopardizes France because this allows Cardinal Richelieu to try and discredit the Queen. Thanks to Milady, he is murdered by John Felton.

Son of Milady and right-hand man of Oliver Cromwell. In Twenty Years After he learns of his mother's murder and goes on to take revenge on the people responsible.

The Duke of Beaufort is a member of the royal family by an illegitimate branch, imprisoned by Mazarin before the start of Twenty Years After. A member of the anti-Mazarin Fronde movement, he escapes with the help of Grimaud on Whitsunday, befriends Athos, and becomes a major figure in the Fronde rebellion. He's also veers on being a Talkative Loon, known for his malapropisms.

Athos's son by Madame de Chevreuse, born a few years after the end of the first book. The official story is that he's an orphan Athos adopted, but the truth is obvious to anyone who sees them together. He grows up to be a perfect gentleman and soldier, but his life is complicated by his love for his childhood friend Louise de La Vallière.

An exiled friend of Queen Anne and Aramis' mistress, she later has one-night-stand with Athos that results in Raoul.