To head back to the main character index, go here.
open/close all folders
In General
Advertisement:
Basara Tōjō

The son of Jin Tōjō, Basara Tōjō was just starting life as a high school student at Hijirigasaka Academy when he got word that he was going to have two new sistersnote  Which turned out to be a ruse. After setting things straight with them, he has become Mio's protector against the faction of demons who want to strip her of the power granted by her father, the former demon lord. 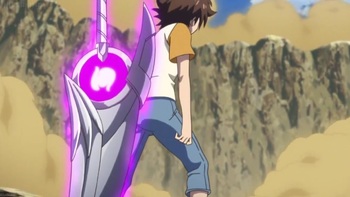 The "cursed" sword of the Hero clan. Yes, she has enough tropes to qualify as a character.

A young girl who happens to be the daughter of the former Demon Lord and holder of his power. She enters Basara's life as a new sister with the promise of her and Maria's mother to wed Basara's father.

Basara's childhood friend who hails from the Hero Tribe. She is in love with Basara and often butts heads with Mio over his affections. She is one of the observers watching Mio.

The father of Basara.

Yuki's little sister who is also from the Hero Tribe. Initially antagonistic towards Basara after meeting him, she changes her attitude and joins his household in the second season.

A Demon who initially served her creator, Zolgia. After Zolgia's defeat, she serves Shella (Maria's mother) before ultimately serving Basara.