Due to size, the page has been split. WARNING! All spoilers before Rhythm of War are UNMARKED!

Heralds of the Almighty 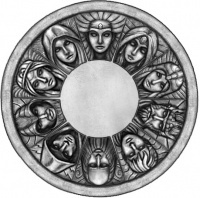 The ten Heralds were warriors of the Almighty, chosen to aid mankind during the Desolations. However, they abandoned their duties after many times having to return to Damnation, shattering the Oathpact. 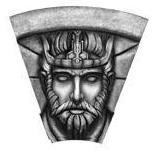 The Herald King, also known as the Stormfather, though the two are actually separate entities. Appears in the Prelude to tell Kalak that it is time for the Oathpact to end. He is also the father of Shalash.
Nale

Also known as Nin to the Shin.

A Herald who seeks justice above all other things. During modern times, he has become a constable and is hunting down and killing Surgebinders that have committed crimes, no matter how minor the offence, convinced that their existence will bring about the Desolation.

A Herald with little known about her at this time. Mentioned in a story from Hoid to have raced Fleet and lost.
Advertisement:
Vedel

One of the Heralds. Mentioned by "Taln" to be a healer who could help the sick and train the surgeons.
Paliah

A Herald said to be able to see the future.
Shalash

The daughter of Jezrien, the Herald king. She appears in The Way of Kings, destroying priceless works of art, especially those related to her. According to Kalak, she has been "getting worse", although it isn't clear what he means by this.
Battar

A Herald with relatively little known about her at this time.
Kalak 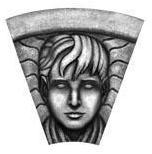 The point of view character in the prelude to The Stormlight Archive. He was the last Herald to make it out of the Final Desolation, and missed out on the other Heralds deciding to abandon the Oathpact. He feels great regret when he leaves his Blade and abandons the Oathpact as well.
Talenel

Knights Radiant Order: Stonewards
Surges: Cohesion, Tension
Attributes: Dependable/Resourceful
"Who am I? I am Talenel'Elin, Herald of the Almighty. The Desolation has come. Oh god... it has come. And I have failed."

The only Herald to die in the Final Desolation. While the other Heralds abandoned the Oathpact, he was forced to stay true to it by being tortured in Damnation. He's proven to be the most resistant one of them, holding the Desolation back for over four and a half thousand years before breaking.

A man claiming to be Talenel appears at the end of The Way of Kings, proclaiming that he has failed and that another Desolation is coming, but gets taken to an insane asylum.

A Herald who was said to have helped found the Knights Radiant, basically by threatening to Kill Them All if they don't comply.

Knights as a whole

"Life before death. Strength before weakness. Journey before destination."

Ten groups of Surgebinders that fought alongside the Heralds in the Desolations. Wielding Shardblades and wearing Shardplate, they helped protect mankind from the Voidbringers. However, long ago they all simultaneously abandoned their oaths and left mankind to their fate, in an event that would become known as the Recreance. In modern times, the Radiants are thought of as villains and cursed at by people everywhere.
The Order of Windrunners Wielders of the Surges of Adhesion and Gravitation and followers of Jezrien, the Herald of Kings. The Windrunners were known for their nobility, their leadership, and their ability to soar through the air, which is the source of their name.
The Order of Skybreakers Wielders of the Surges of Gravitation and Division and followers of Nale, the Herald of Justice. The Skybreakers were the police of the Radiants, known for their ability to separate the innocent from the guilty, despite not actually having any special powers in that area.
The Order of Releasers Wielders of the Surges of Division and Abrasion and followers of Chanarach. They were also known as the Dustbringers, but they disliked that term due to the similarity to Voidbringers. They were known for being very dangerous on a personal level.
The Order of Edgedancers Wielders of the Surges of Abrasion and Progression and followers of Vedel. They were known for being the most elegant and refined of the Radiants, but at times focused on unimportant things.
The Order of Truthwatchers Wielders of the Surges of Progression and Illumination and followers of Paliah. They seem to be the only Order with the ability to see the future, a powerful but dangerous gift.
The Order of Lightweavers Wielders of the Surges of Illumination and Transformation and followers of Shalash, Herald of Beauty. Lightweavers tended to be artists and other creative types, and acted as the moral center of the Radiants, using their powers to inspire their fellows.
The Order of Elsecallers Wielders of the Surges of Transformation and Transportation and followers of Battar. Due to the fact that both of their Surges involved contact with the Cognitive Realm, Elsecallers were known for having a great affinity with spren in general.
The Order of Willshapers Wielders of the Surges of Transportation and Cohesion and followers of Kalak. They were known for being capricious and adventurous, and were often thought of as unreliable.
The Order of Stonewards Wielders of the Surges of Cohesion and Tension and followers of Talenel, Herald of War. They were known for being strong, resolved, and utterly dependable.
The Order of Bondsmiths Wielders of the Surges of Tension and Adhesion and followers of Ishar, Herald of Luck. The Bondsmiths had a much lower member rate than the rest of the Orders; three Knights wasn't a particularly small number for them.

"What would you like? Renown? Wealth? Skill? Would you like to be able to swing a sword and never tire? Beauty? Followers? I can feed your dreams, make you glorious."

A mysterious being living on Roshar. To those who visit her for the Old Magic, she gives you a boon which she thinks you deserve, as well as a curse to balance it.
The Sibling

"Have you realized, that while you claim to be a master thief, I do all of the work in this relationship?"

Lift's spren, a cultivationspren who appears as vines growing on the ground, invisible to most. He is a scholar and gardener, constantly upset with Lift's antics.
Glys

"Give me your sorrow."

"You are like a spren. You think by facts. You change not on simple whims. You are as you are."

Jasnah's spren, an inkspren who defied his people to bond with her. He greatly respects her for her logical nature.
Mayalaran

Captain Ico: What is she to you?
Adolin: A friend.
Captain Ico: A tool. You use her corpse on the other side, don't you? Well, I won't blame you. I've heard stories of what they can do, and I am a pragmatic person. Just... don't pretend she is your friend.

The cultivationspren who is Adolin's Blade. In Shadesmar, she is a "deadeye," a spren who looks like a "dead" version of living spren (in her case, appearing to be made of dead vines) and with the eyes scratched out like a damaged painting. She is largely unaware of her surroundings, and will always try to stay close to her corpse.
Spark

An ashspren bonded to Malata.

"Surprises are dumb. He should be informed if a product is good or not before being asked to commit. Would you like a similar surprise at the market? Oh, you can't buy a specific food. You have to carry a sack home, cut it open, then find out what you bought. Drama. Suspense!"

The Cryptic Wit/Hoid bonded at the end of Oathbringer.
Testament

A "new" deadeye Cryptic Adolin encounters on Shadesmar, who was supposedly killed not during the Recreance, but recently.

Unmade as a whole
"The Unmade are a deviation, a flair, a conundrum that may not be worth your time. You cannot help but think of them. They are fascinating. Many are mindless. Like the spren of human emotions, only much more nasty. I do believe a few can think, however."
— From the Diagram, Book of the 2nd Desk Drawer: paragraph 14

The most powerful of Odium's Voidspren, set upon the world to cause chaos and destruction. There are nine of them in all, represented by Odium's Champion having nine shadows.
Yelig-nar

"Yelig-nar, called Blightwind, was one that could speak like a man, though often his voice was accompanied by the wails of those he consumed."
— Traxil, line 33

The first confirmed Unmade, he appears as a man-shaped cloud of dark air. He can bond with a person and turn them into a full Surgebinder.
Sja-anat

Sja-anat, the Taker of Secrets

"Radiant. My name is Sja-anat. And I am not your enemy."

An Unmade mentioned in one of Dalinar's visions, later appears in Oathbringer. She can transform regular spren into voidspren.
Nergaoul

"Nergaoul was known for driving forces into a battle rage, lending them great ferocity. Curiously, he did this to both sides of a conflict, Voidbringer and human. This seems common of the less self-aware spren."
— From Hessi's Mythica, page 121

The Unmade that produces the Thrill, the supernatural thirst for combat and conquest that has shaped Alethi culture for centuries.
Moelach

"There is one you will watch. Though all of them have some relevance to precognition, Moelach is one of the most powerful in this regard. His touch seeps into a soul as it breaks apart from the body, creating manifestations powered by the spark of death itself. But no, this is a distraction. Deviation. Kingship. We must discuss the nature of kingship."
— Diagram Book of the 2nd Desk Drawer: Paragraph 15

The Unmade behind the Death Rattles, the prophetic visions seen by the dying. In Words of Radiance, he begins moving west for an unknown reason, and Taravangian is worried he might decide to sleep again.
Dai-gonarthis

An Unmade of unknown power and purpose, mentioned only in a Death Rattle.
Re-Shephir

"Re-Shephir, the Midnight Mother, giving birth to abominations with her essence so dark, so terrible, so consuming. She is here! She watches me die!"
— Death vision

The Unmade who created the Midnight Essence that Dalinar saw in one of his visions. She can create creatures out of it and mimic human appearance to some extent.
Ashertmarn

Ashertmarn, the Heart of the Revel

"Give it all to me. Give me your passion, your hunger, your longing, your loss. Surrender it. You are what you feel."

An Unmade that causes people to indulge in excess in all things, until they don't care about anything at all.
Ba-Ado-Mishram

"Ba-Ado-Mishram has somehow Connected with the parsh people, as Odium once did. She provides Voidlight and facilitates forms of power. Our strike team is going to imprison her."
— From drawer 30-20, fourth emerald

The Unmade who provided the parshmen with their powers after the Last Desolation. Binding her is what turned them into slaves.
Chemoarish

"Chemoarish, the Dustmother, has some of the most varied lore surrounding her. The wealth of it makes sorting lies from truths extremely difficult. I do believe she is not the Nightwatcher, contrary to what some stories claim."
— From Hessi's Mythica, page 231

An Unmade with little known about her.

Other Beings of Magic

"Hello! Would you like to destroy some evil today? "

"You don't get to choose to be free, Venli. Just which master to follow. "

A Voidspren given to Venli by a mysterious human woman. He tells her of a new kind of storm that will grant her people forms of power...