open/close all folders
The Splat Crew 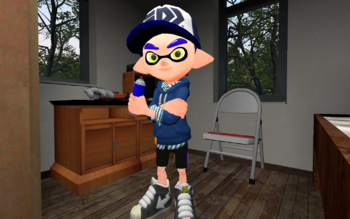 Bio: Blue grew up in Inkopolis and had a habit of getting in trouble for spraying walls with graffiti. He met his girlfriend Viriti when she fell on top of him after being knocked off of the school bleachers by a miskicked soccer ball. They started dating not long after that. Blue is the only on that can easily calm Viriti when she loses her temper.
Personality: Blue is a gamer and artist. He is friendly and willing to help others when they need it. He always carries a spray paint can and cant resist spraying his nickname on blank walls.

Blue sports a Takoroka Mesh, a Shirt with Blue Hoodie, and Black Dakroniks. He wields the Aerospray RG. He's the bassist of The Splat Crew. 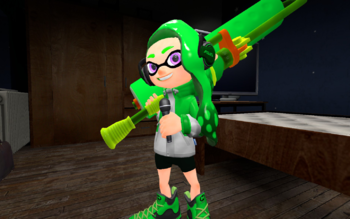 Bio: Green will always come to the aid of those who are being treated badly.
Personality: Green is friendly and has a good sense of humor. She also has a great appreciation for art, making her perfect for Blue. She is hard to anger but when she has been, she becomes a force to be reckoned with. She often changes into Kraken form to deal with whatever or whoever angered her. 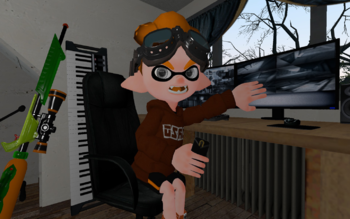 Bio: Orange will always find ways of catching people in awkward moments. He has a secret cache of technology and blackmail material hidden somewhere. Orange custom built his phone. It has a high amount of memory and zoom in the camera. Orange grew up in a suburb outside of Inkopolis. He lived across the street from Teal whom he has been friends with his whole life. When in school he would protect his sister from anyone who would pick on her, and was very effective at it, declaring that only he could pick on her.
Personality: Orange is a sadist and loves when others are scared or miserable. He also has no problem with taking embarrassing pictures or videos. He is a genius and can fix or modify any piece of technology he finds. 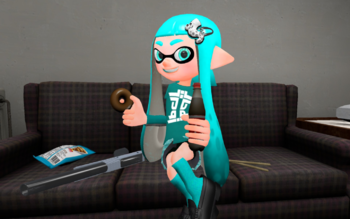 Bio: Teal has an extremely high metabolism, making her hungry all the time. It's very common to see her with some kind of snack in her hand. She grew up across the street from Orange and his sister Kat and has been friends with them her whole life. She see's Kat like a sister to her. She can sometimes be a little naive. She still wears her school uniform even when she's not in school because she uses all her money on snacks. However she was recently given a Mint Tee for free and now wears that instead.
Personality: Teal is energetic and playful, always playing pranks on her childhood friend Orange because she thinks its funny when he's mad.

Teal sports a Squid Hairclip, a Mint Tee, and School Shoes. She wields the N-ZAP '85. 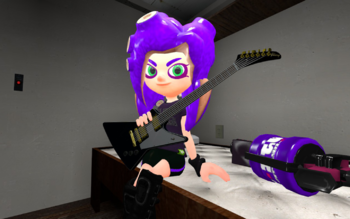 Bio: Octo joined the Crew after she was exiled from Octo Valley. After DJ Octavio was captured by Agent 3, she had a falling out with her former squad after she suggested coexistence. After her exile she wandered into a junkyard where she found her guitar. She then traveled to Inkopolis as she didn't know where else to go. Despite being a former elite she changed her tents to the standard red to avoid unwanted attention. However upon arrival she was quickly harassed by a group of Inklings. Luckily the Crew was nearby and helped prevent any violence from taking place. She has been a member ever since. She used to wear her old armor out of nostalgia but has since abandoned it after losing faith in its meaning. She still has her goggles but they are broken and do not work anymore.
Personality: Octo is strong and protective of those she cares about.
Octo sports an Octo Tee and Black Moto Boots. She wields the .96 Gal. 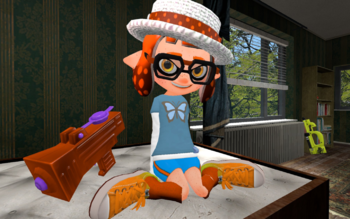 Bio: Kat being as timid as she is would often be an easy target by others. Its thanks to her brother Citcho that she was never treated badly for very long.
Personality: Kat is a shy and timid person and gets embarrassed very easily. 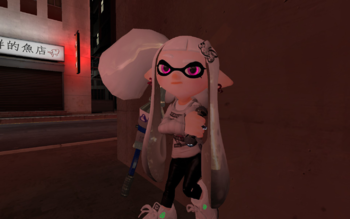 Bio: White was born an Albino and has heard ever joke about her color you can think of. This has caused her to have a violent temper and no sense of humor. While in school she finally broke and took her first victim in the lunch room by punching her in the face in front of everyone. She has an almost unnatural sense of sight and can see thing most others can't. Some say her cold personality is more them meets the eye.
Personality: Tough and humorless, White has a very short fuse with anyone who annoys her which often end in her punching someone.

White sports a Squid Hairclip, Squid Clip-Ons, an Annaki Drive Tee, and white trainers. She wields the Inkbrush and... a white energy sword... 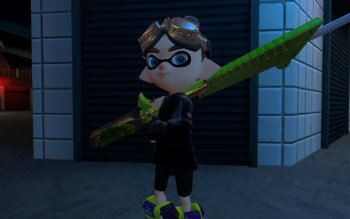 Bio: He and his sister are twins and have almost never been apart. Black is adept at hiding in shadows and uses this to his advantage. Those he fights become scared of the dark fearing he will drag them into it.
Personality: Stealthy and silent, Ebon prefers to pick off his targets before they ever even know he's there. 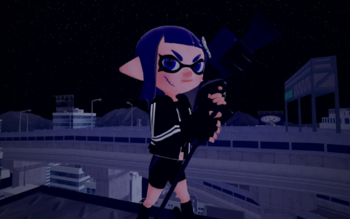 Bio: Darkness is the lone survivor of a raid that was lead by the Octoling Commander. During this raid her right tentacle was cut off and she was shot in the head. Her survival came at a price, her memory. All she can remember from her previous life are the faces of those who hurt her. She quickly got her revenge when she woke up hours later to find that most of the Octoling raiders were asleep in a nearby camp. She used the very weapon that should've killed her. However, after stealing the spare clothes they had, she discovered that there were more raiders out there and that they were hunting a traitor, Lavanna. She has sworn revenge against all octolings that would do the same harm to others. She plans to use Lavanna as bait to fulfill that vow.
Personality: Serious and determined, Darkness will not put up with anything that could slow her down. How she was before she was attacked is unknown even to her.
—Her Enhanced Profile 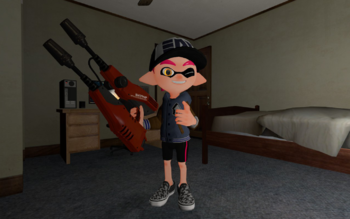 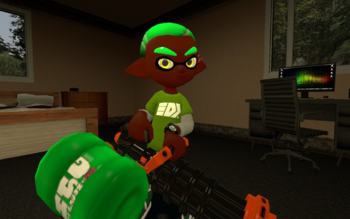 Bio: Leaf has been best friends with Coral all though school. He has seen Coral fail so many times that its become a normal sight for him. Despite this he still tries to help his friend when he can. Leaf was the one that pointed out Darkness to Coral. However he quickly realized it was a bad idea for Coral to talk to her when he noticed Darkness's missing tentacle, seeing it as a sign that she could be trouble. After Darkness took Coral up on the offer for help Leaf confronted her thinking that she was playing with them. When she revealed that she cant remember anything he lightened up on her and was able to cheer her up by becoming friends with her.
Personality: Leaf is smart and knows when things are not going to work and when to stop. He is a strong contrast to his best friend Coral.
—His Enhanced Profile