Our heroes, everyone. Just not the only ones, as we'll see later.

"And for what reason did you call upon me?"

Before reviewing PONY.MOV, Z Squared made the, as he quotes, HORRIBLE mistake of bringing his brother back from hibernation. This knight's motive is to stop "a great evil" by preserving films. To do this he has taken, by forced contract, 10 pop culture characters to review said films. He does some reviewing himself, but only on youtube. He is the most powerful member of the team, being able to use magic and withstand just about anything. However, this is starting to change as time goes on. And something about him feels a bit...off...

Post-reboot and, as of Season 4, it's revealed he's in a long-running battle with his brother, the Great Evil known as Ahnil. Currently, he's been reduced to his orb form thanks to one of Bagan's attacks. 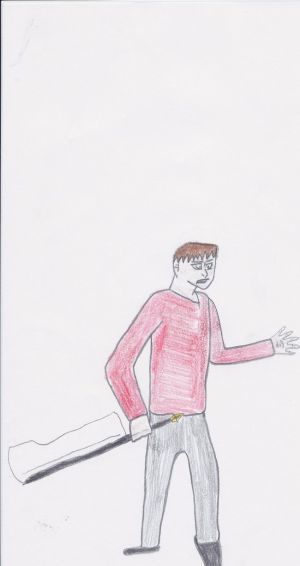 This horrible art-style is INTENTIONAL. Ouch.
"Sup guys, this is Z-Squared"

Z-Squared is Sir Cinemacus' younger brother and, essentially, the main character. He is almost the polar opposite of his sibling. Unlike Sir, Z is more sarcastic and isn't as prone to using formal speech. He personally thinks his brother is completely insane, and he finds his little Review Team thing to be equally as crazy. Nevertheless, he's a part of it, and he isn't too proud to admit it. He's mellowed out as time went on. 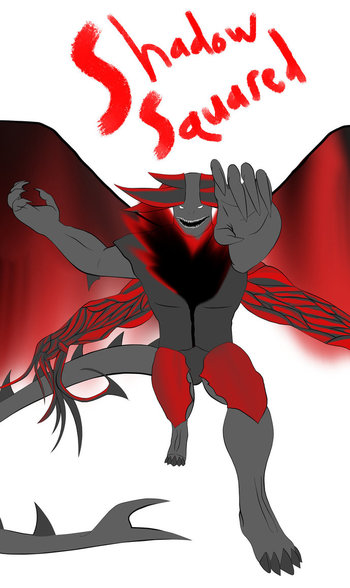 Remember. He's still the good guy.
''"I may look scary and imposing now...But I'm going to do what you won't. Be a friend. You got yourself a heaping ton of power, but that's not satisfying, is it? You just will continue to take and take until life itself loses all meaning to you. Me? I'll focus on helping people smile. To imagine a brighter day. To give hope."

Z-Squared's true form. After episode upon episode of holding it all back, the death of Tafeli triggers this mighty transformation. One that can be seen beyond the milky way. A string of good events happen on Earth as a response. It is this form that allows Sin to be pummeled into submission. However, the form is taxing, so it's recommended this be for only last resort moments.

Hailing from the Toho universe, this rather grumpy kaiju is like the other members. Namely, he didn't ask to be here and be shrunk down most of the time, but the food he gets paid is nice. It is likely he serves as the main character, aside from Z-Squared, due to how much screen-time he gets. The incarnation used is his millennium one, with major changes to his timeline as well.

The studious unicorn protagonist of Equestria. The one notable thing is that she is in her pre-Season 3 finale appearance, having not become a princess yet. Due to Sir's idiocy, she and her friends often have to deal with their own troubles back at home or even in other universes. She currently has a daughter named Hope, which she sired with Rick.

The hero of Ooo.

The rock-loving vampire of Ooo. Really, she's only here for the amusement, though she's slowly getting used to life in the team.

The goddess of Infant Island and the most recent in a long line of Mothras. She currently resides on Monster Island with her child, Fairy Mothra.

An otherwise minor dragon from Equestria that managed to become a major character. The very same dragon that nearly smoked Ponyville up, he has changed his ways and even got into a relationship with Fluttershy along the way.

The Element of Kindness. Mostly here for moral support.

The leader of the Decepticons. Currently still traveling through space along with his minions on board the Nemesis.

The resident chaotic being of Equestria. Here for the fun of it, though he's quickly finding himself enemies out of his league.

The one from Batman and Robin. Yes, really. 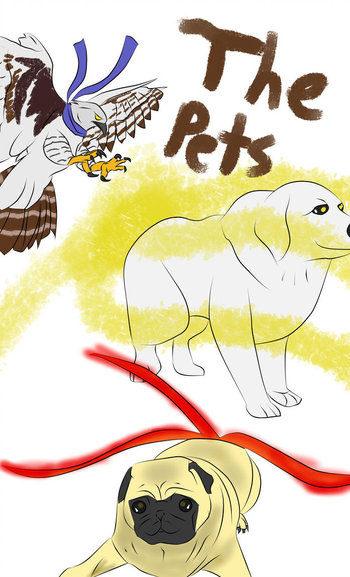 A shame we don't see them as often.

A Harpy Eagle, a mutant Pug, and a Great Pyrenees. They serve as the rather odd choices for pets Z-Squared has and they serve a large role in The Rise of Golus.

A temporary member during the Golus arc hailing from the CDI era of Zelda games. Called upon to help stop Golus, he reluctantly assists if only to see justice done and, perhaps, find purpose.

A temporary member during the Golus arc. Usually, he's the traitorous second-in-command to Megatron. However, his time in the arc forces him to help out.

A temporary member during the Golus arc, hailing from Bikini Bottom. Despite not bringing much to the table, he still managed to save the day in a rather large way. 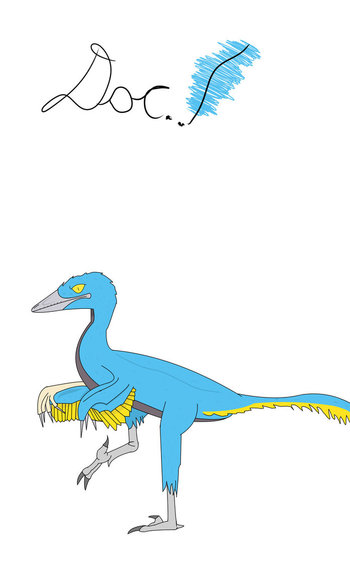 Not your typical butler.

The butler of the Headquarters. 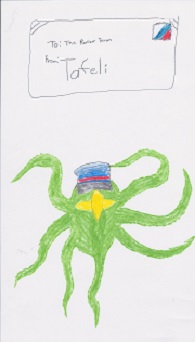 ''"I'm not an alien! I'm a proud Kinclocloptian citizen!"

An intergalactic mailman from the planet Kincloclop. A plucky and modest fellow, he usually visits from time to time. The moment he go in the spotlight was when he, along with 3 members of the Review Team, was sent to kill Orlok the Nosferatu.

Built by Sir Cinemacus by use of nanites, this robot was built to be the ultimate fighter and bodyguard of the Review Team. However, Sir made the mistake of bragging about it and saying it was better than Megatron. Searching for proof, Sir made the mistake of having Azazel, King of Equestria, fight the mech. Needless to say, despite Sir intervening, the machine was obliterated.

Yet another machine inspired by an American property, but this one actually goes on a rampage through Equestria. Thankfully, she is destroyed by Rick.

One of the newest members introduced in Season 4...kinda. A spoiled and slightly psychotic rich-boy/superhero, he's currently the ruler of the imperialistic Albinians, where he spends most of his time partying and supplying weapons to the Review Team on the promise on fighting his old nemesis, Killface, once more.

Daenerys Targaryen's eldest dragon and, by extension, the last dragon in Westeros. After the finale of his series, he went into exile with his mother's corpse, but Sir Cinemacus found him and got him into a contract, forcing him to become a member. He's not very social, as you might guess.

Yes, we're not even kidding. The perpetually stressed British working man/single father found himself in Sir's employ for reasons nobody can explain. Despite the danger of the job, he's arguably in a better position than he is now.

See The Review Team Major Villains for his entry.