The mayor of Townsville wears a trademark hat, monocle, and huge bushy mustache, and is referred to only as "Mayor" (even campaigning with the slogan "vote for Mayor for Mayor"). He is neither bright nor mature, and relies heavily on his secretary and personal assistant, Ms. Sara Bellum, to do the real work around the place. The Mayor seems to have his job only because no one bothers to run against him; The Narrator once refers to him as "The Pity of Townsville." Also, he really likes pickles, but does NOT like people wearing his hat. 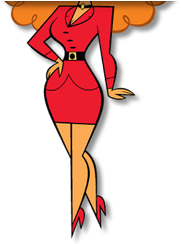 Ms. Bellum is the mayor's much-more-competent personal assistant, helping him out with whatever he can't handle on his own (i.e. just about everything). She's tall and has long, bushy red hair, but her face has never been shown—it's always blocked by the top of the frame, a conveniently-placed obstacle, or something like that. 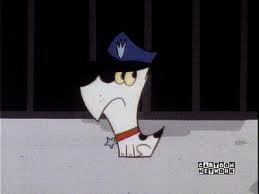 As one can readily deduce, the Talking Dog is a canine resident of Townsville who has the inexplicable ability to speak English.

The series' enthusiastic narrator is never seen at any point in the series, though he is a person and not just a disembodied voice—for example, in "Monkey See, Doggie Do", he's turned into a dog along with the rest of Townsville, and in "Simian Says", Mojo Jojo kidnaps him and takes his place as the narrator. As the narrator, he, of course, has the ability to break the fourth wall. 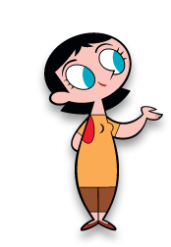 The kindergarten teacher of Pokey Oaks Kindergarten. She is patient, understanding and very protective of her students, making her a well-liked, motherly figure. 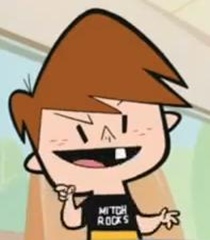 A mean kid who is in the girls' kindergarten class. 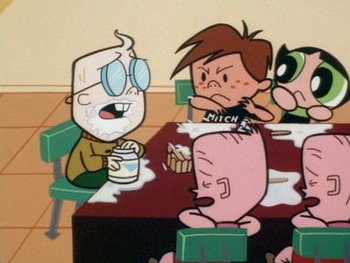 A kindergarten boy who turned into a giant glue monster. 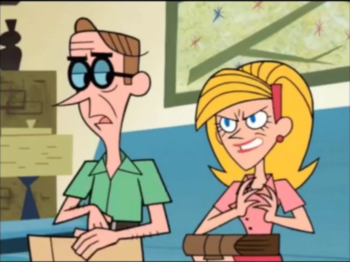 A very strict couple who make a contract to ban the Powerpuff Girls' use of their superpowers. 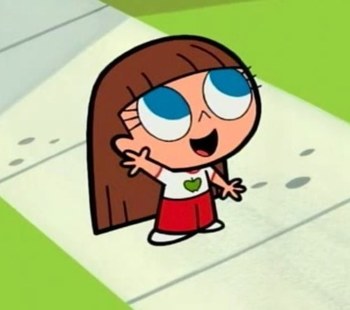 A little girl that the Girls befriend in "Super Friends". 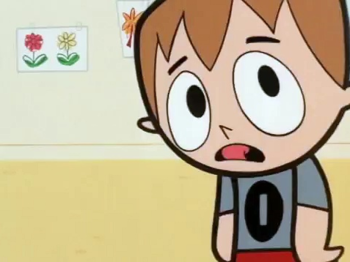 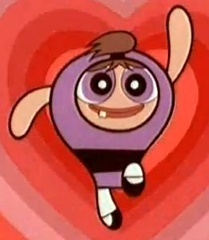 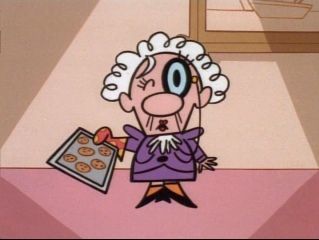 She's, well, the Mayor's wife. The Mayor doesn't seem to like her very much.

A monster who works as a substitute teacher for Miss Keane's class the one time she's absent in the "Substitute Creature" episode. The girls are distrustful of him due to his nature but it soon becomes apparent that his ugly exterior belies his kind personality. 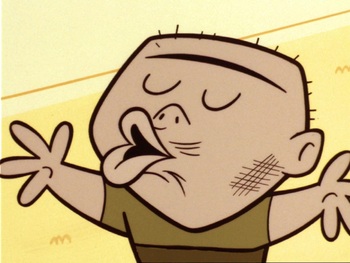 A dirty, unkempt classmate of the girls at Pokey Oak, who is said to have cooties.Gross-Up Close-Up: Whenever we are treated to a good shot of Harry's saliva-infused smooching lips.