Characters / The Pet Girl of Sakurasou

A list of characters of The Pet Girl of Sakurasou, most of which reside in the titular Sakura Hall, a wooden two-story house harboring some of the quirkiest students of Suimei University of the Arts High School ("Suiko" in local parlance). Some spoilers for the light novels are left unmarked, so read at your own risk.

Voiced by: Yoshitsugu Matsuoka (Japanese), Greg Ayres (English)
The protagonist, an insecure second-year high school boy who chose to move to Sakura Hall rather than throw away a stray cat he had found. In there, however, being surrounded by talented yet quirky peers has taken a toll on his ordinary life, more so when he meets Mashiro, who indirectly inspires him to carry on with his dream of developing video games. He lives in Room 101.
Mashiro Shiina

Voiced by: Ai Kayano (Japanese), Caitlynn French (English)
The female protagonist, a gifted yet somewhat strange second-year transferee to Suiko after living for many years in England to learn how to draw manga. Early on, she exhibits a total lack of knowledge in any other skill than drawing, including basic hygiene and social skills. For this reason Sorata was assigned as her caretaker. She lives in Room 202.
Nanami Aoyama

Voiced by: Mariko Nakatsu (Japanese), Christina Kelly (English)
Sorata's classmate, who later transfers to Sakura Hall, another second-year high school girl, and an aspiring voice actress. Because her parents disapprove of her chosen career, she is disowned and runs away from home, forcing her to work in multiple part-time jobs to earn money so she could transfer to a voice acting school. She lives in Room 203.
Jin Mitaka

Voiced by: Takahiro Sakurai (Japanese), Scott Gibbs (English)
A third-year student and Misaki's childhood friend. Despite his genuine feelings for Misaki, he feels she is too talented for someone like him, a struggling playwright, so he instead becomes a playboy. He lives in Room 103.
Advertisement:
Misaki Kamiigusa

Voiced by: Natsumi Takamori (Japanese), Luci Christian (English)
A third-year student, Jin's childhood friend, and a hyperactive artist, whose obsession with anime and manga forced Suiko's higher-ups to send her over to Sakura Hall. She lives in Room 201.
Ryuunosuke Akasaka

Voiced by: Yui Horie (Japanese), Blake Shepard (English)
An second-year boy (yes, that's a he) and an expert with computer programming. He rarely leaves his room at Sakura Hall, but eventually, he comes out and starts attending Suiko. He lives in Room 102.
Chihiro Sengoku

Voiced by: Megumi Toyoguchi (Japanese), Olivia Swasey (English)
Mashiro's relative, overseer of Sakura Hall, and art teacher at Suimei High. Despite that, she's more interested in drinking and dating. She's also irresponsible taking care of Mashiro's condition, forcing Sorata to become her caretaker, and even then she'd give him improper, irrational advice.
Advertisement:

Voiced by: Yui Ogura (Japanese), Brittney Karbowski (English)
Sorata's younger sister and a third-year junior high school girl who looks too young for her age. She enters Suiko and stays in the Sakura Hall in the seventh book of the novels.
Akiko Kanda
Voiced by: Satomi Arai (Japanese), Nastasia Marquez (English)

Voiced by: Ayako Kawasumi (Japanese), Skyler Sinclair (English)
Mashiro's former handler during her stay in England. She was also an aspiring artist, but, driven by envy over Mashiro's superior talent, Rita "encourages" her to transfer to Japan to draw manga. Soon she regrets her decision, so she travels to Japan to persuade Mashiro to return with her, all to no avail. She eventually returns home, but not before making a most curious acquaintance in the form of Ryuunosuke.
"Maid" 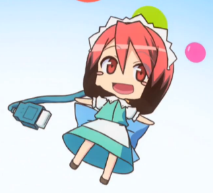 Sorata and Nanami's friend and classmate. He has a crush on Nanami.

The Student Council President of Suimei High. He has some history with Jin.

A game designer and a former tenant of Sakurasou.