Characters / The Penguins of Madagascar

Although they were just a One-Scene Wonder in the first movie, the penguins have proven to be Ensemble Darkhorses to the point that their part in the movies escalated and then they received their own show, The Penguins of Madagascar and a solo movie that (debatably) tied the Madagascar canon to the series canon.

Note that this character sheet applies only to the TV series canon. For tropes related to the characters in the movie franchises (including Penguins of Madagascar), go here. 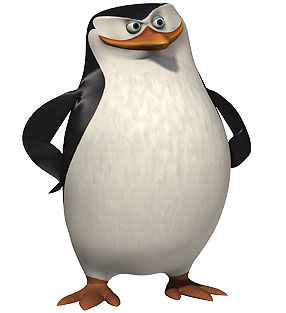 The leader of a Badass Crew of Commando Penguins, voiced by DreamWorks animator/TV series co-creator Tom McGrath. He speaks in a crisp, hard-edged tone like a cool spy from a film noir movie. In the TV series, Skipper is somewhat abrasive with the other three penguins, often chastizing them and Dope Slapping them to keep them in line. 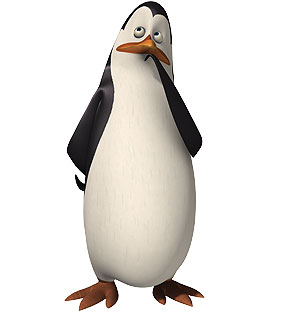 The team genius and gadgeteer, voiced by Jeff Bennett. Kowalski builds all of the crazy technology that the other penguins use, and a lot of the tech that causes a lot of trouble for them too. He helps to come up with plans - usually ones that are overly complicated - and is occasionally referred to as 'Lieutenant'.

Kowalski is certainly the smartest penguin alive, but his sciencing has a bad habit of putting the entire world in danger, a source of never-ending frustration to Skipper. The solution? MORE science. 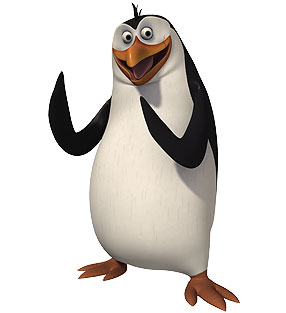 Rico - voiced by John DiMaggio - is the team Demolitions Expert - and their storage unit. Gluttonous, big-bellied, and impulsive, he usually speaks in short grunts, but he can be fairly coherent when the situation calls for it. Rico's special skill is regurgitating pretty much anything the penguins need - and a lot of things they don't - from a simple paperclip, to a stick of dynamite, to fan blades and a toilet seat, all the way up to a self-assembling air-to-ground missile-launching platform. And the reason he can do it, as far as anybody can tell, is because he ate them first...

To distinguish him from the visually similar Skipper, in the series Rico has a mohawk and a scar over his beak, possibly caused by hacking up too much stuff. 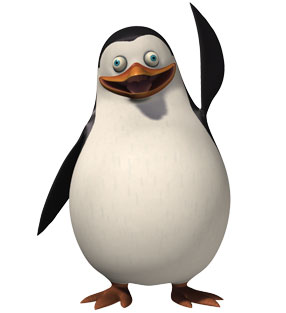 The youngest member of the team. Voiced by James Patrick Stuart, he tends to be the most sane and logical — at least in comparison to Skipper's paranoid delusions, Kowalski's mad science, and Rico's love for explosions. Sometimes he's also got a little bit of childish naïveté. He has a tendency to get the sucker jobs. 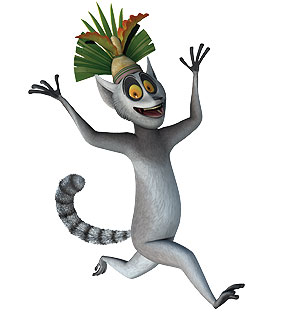 A ring-tailed lemur and (apparently self-proclaimed) king. Egomaniacal and ditzy, he's the closest thing the show has to a recurring antagonist. But at the same time, the penguins tolerate him when he's not being that big of a jerk. Julien "rules" over a small empire also comprising Maurice and Mort (see below). Voiced by Danny Jacobs. 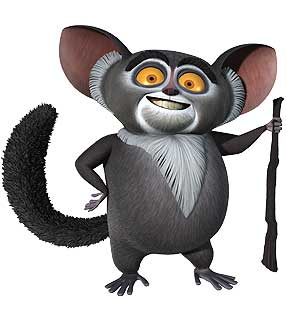 An aye-aye who serves as King Julien's right hand man and advisor, although Julien rarely follows his advice. Although he seems easily annoyed by Julien's antics, Maurice isn't above saving his life. Voiced by Kevin Michael Richardson. 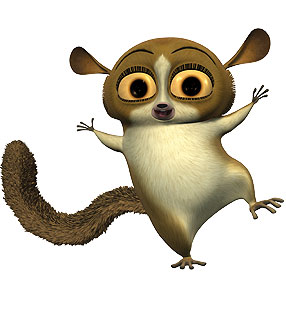 A mouse lemur who is also part of Julien's companions. He is pretty much there to be the victim of physical comedy, although Marlene in particular seems to care for him. Voiced by Andy Richter. 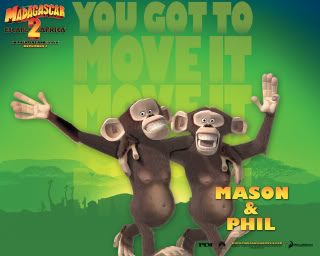 A pair of chimpanzees. Mason is a stuffy British-accented one (voiced by Conrad Vernon), while Phil is mute and communicates only through (completely accurate) sign language. 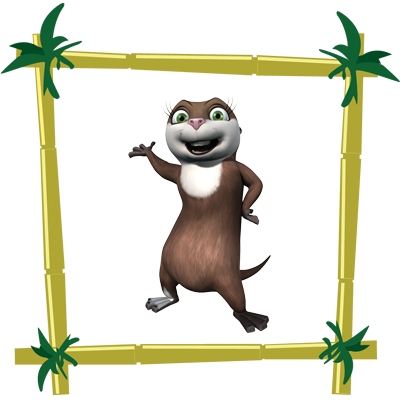 A perky female otter who is friends with the penguins. Playful and kind, she tries to see the best in others and is one of the only characters who cares for Mort's well-being. Voiced by Nicole Sullivan. 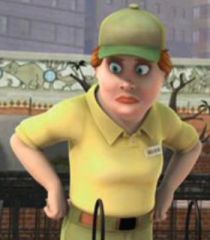 Voiced by Mary Scheer. She is a zookeeper who doesn't seem to care too much for her job, and expresses annoyance at tour groups.

Bada and Bing
Two hulking, thuggish gorillas living in the zoo. Bada is dark grey, Bing is a lighter shade of grey.
Roger 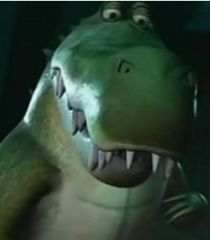 A large, friendly alligator. Although the others are terrified of him at first, they grow to like him once they find that he is pacifistic and friendly. Eventually he moves into a habitat in the zoo. Voiced by Richard Kind. 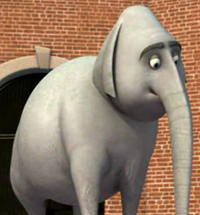 The resident elephant at the zoo. Though normally an easygoing guy, he's easily annoyed by anyone messing with his food. But if you do manage to set him off...

He is Central Park Zoo's only white rhinoceros. He's calm and friendly, but does get agitated easily.

Leonard
A paranoid koala who first appears in "Night and Dazed". He is rather afraid of the penguins in their attempts to be nice to him, mainly because he's often the target of unintentional injury. Voiced by Dana Snyder.
Joey 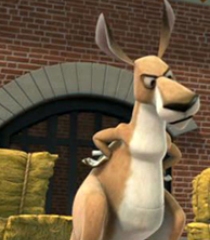 An ill-tempered, violent kangaroo with a stereotypical Australian accent. Antagonist to both the penguins and the lemurs most of the time. Voiced by James Patrick Stuart.

Randy
A sheep who lives in the Children's Zoo.

Animals Outside the Zoo 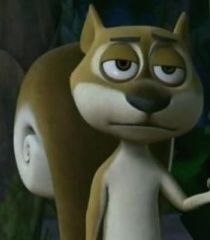 A not-too-bright squirrel who lives in the park. When the penguins leave the zoo, they often cross paths with him. Voiced by Fred Stoller. 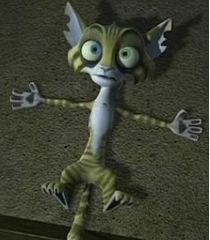 A stray cat whom the penguins first meet in a failed attempt to fly to the moon. Max has reappeared in several episodes, often seeking help from the penguins. Voiced by Wayne Knight.

Eggy
An adorable little duckling whose egg came under the penguins' care during "Parental Egg-Stinct". After hatching and being returned to Mama Duck, he showed an innate talent for Skipper's style of leadership.
Kitka
A falcon who crash-landed in the zoo, setting off the events of "The Falcon and the Snow Job" and serving as Skipper's Temporary Love Interest as he fought to clear her good name.
Doris
A dolphin whom Kowalski still yearns after. Appears in the Grand Finale, "The Penguin Who Loved Me."
Uncle Nigel
Private's Uncle Nigel who comes to pay the penguins a visit. At first, he comes off as a complete fop but his true nature is completely different.
Parker
A platypus who helps Doris contact Kowalski during "The Penguin Who Loved Me".
Manfredi & Johnson (Unmarked Spoilers)
Two former members of Skipper's team, they are often name-dropped whenever some ill fate or accident is mentioned. They are finally seen in "The Penguin Who Loved Me." James Patrick Stuart voices Manfredi while Danny Jacobs voices Johnson. 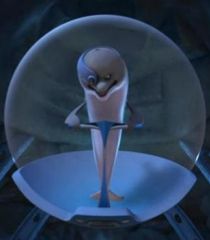 A mad scientist and primary antagonist to Skipper. At first, he was only mentioned in passing by Skipper, leading to Marlene's belief that he didn't exist. The half-hour "Dr. Blowhole's Revenge" showed him to be real. Voiced by Neil Patrick Harris. 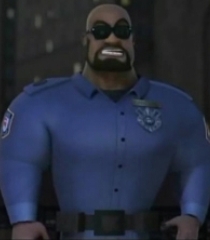 An animal control officer who has made repeated, failed attempts to capture the penguins while they're out on the town. After getting thwarted by the penguins in one episode, he loses his job and reappeared later on as an exterminator and so on. Voiced by Cedric Yarbrough. 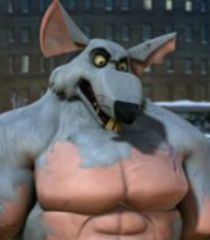 A large, muscular sewer rat with a heavy East-Side accent and a tendency to say "Dude!" and "Awesome!" a lot, who often antagonizes the penguins. Voiced by Diedrich Bader.

Hornets
A group of hornets who like stinging people.
Hans 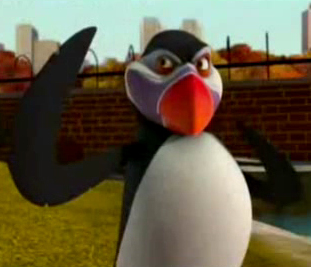 A puffin who has a dark history with Skipper. Whatever happened in Denmark is between Skipper, him and the Danes.

Clemson
A lemur who was mailed from Hoboken Zoo to Central Park and back.
Savio 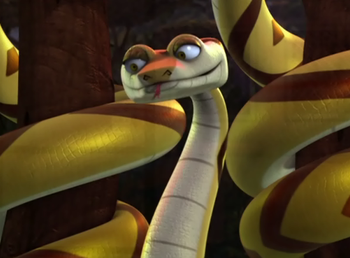 A boa constrictor who was temporarily transferred from Hoboken Zoo to Central Park.

The Red Squirrel
An evil squirrel who longs to Take Over the World, but is experiencing problems getting any evil plans off the ground, mostly because he lacks Mooks.
Jiggles
A gelatinous Green Cube creation of Kowalski that nearly destroyed the world. Twice. Kowalski's attachment to Jiggles proves endlessly frustrating to Skipper and dangerous for everyone else.
Blue Hen
An incredibly intelligent chicken from Delaware and Kowalski's rival, voiced by Audrey Wasilewski.
Kuchikukan
Known as the Destroyer of Worlds, he is a powerful, cataclysmic entity of sheer evil who was defeated by General Shingen and imprisoned within an urn in ancient times which was then housed within a museum. After Private mistakingly frees him from his prison, he seeks out to continue his mission of destroying our planet and every single world he comes across. Voiced by Conan O'Brien.
Chuck Charles