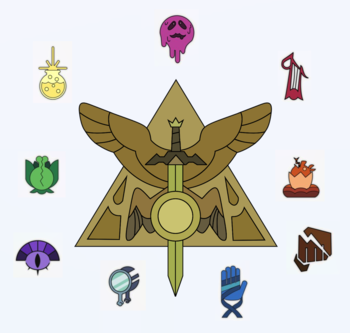 The ten major covens.note Clockwise from top: Abomination, Bard, Beast Keeping, Construction, Healing, Illusion, Oracle, Plant, Potions. Middle: Emperor's Coven
The covens of the Boiling Isles. There are nine main covens: Bard, Plants, Illusion, Oracle, Beast Keeping, Construction, Healing, Abominations, and Potions. Once a person is assigned to a coven, they receive a mark that binds them to only using that coven's magic. The only exception is the Emperor's Coven, which is an elite military force working directly under the emperor with special clearance to use all forms of magic. 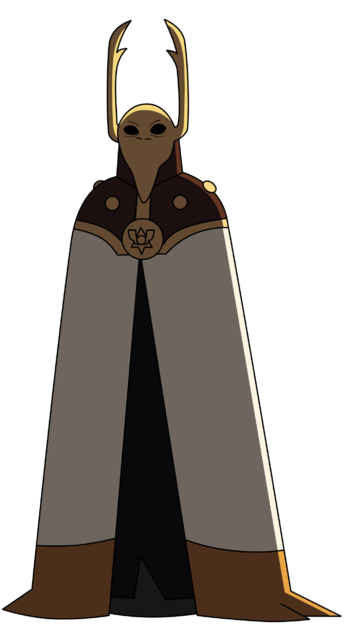 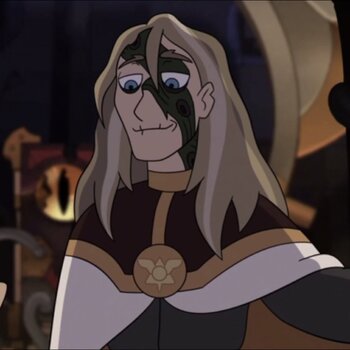 A Humble Messenger for the Titan
"The Day of Unity is almost upon us, and we have much work to do."

The Emperor of the Boiling Isles, and overseer of the coven system, who harbors a dangerous plot to take over all worlds. 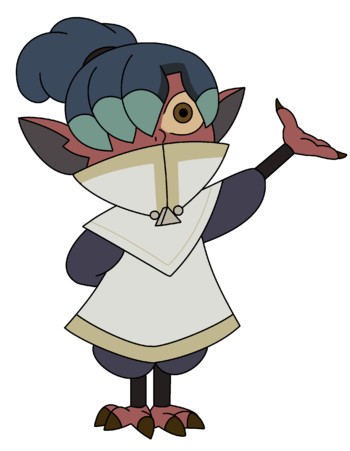 The Emperor's personal attendant, making her a high-ranking member of his coven and a part of his inner circle. 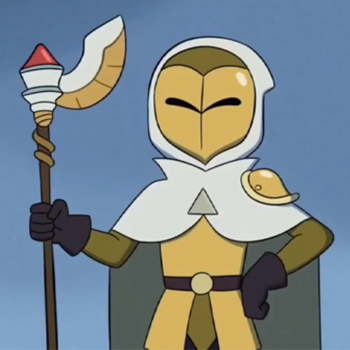 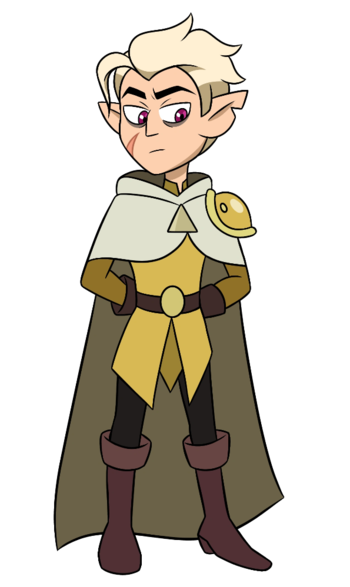 "There's nothing worse than disappointing someone who thinks you're special."
The Genius Teen Prodigy
"The Emperor is not a merciful man. [Beat] Byeeee!"

A mysterious member of the Emperor's Coven who seems to hold a high rank and is entrusted by Belos to keep an eye on the Owl House and its occupants. 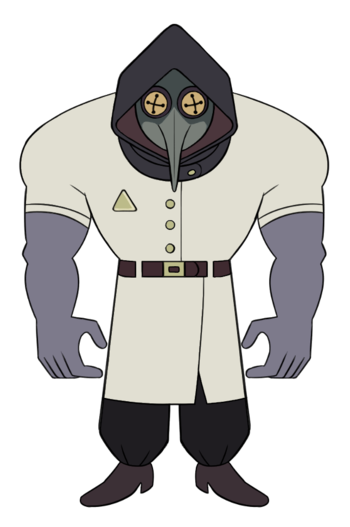 "Let this be a lesson to all of you, there's no place in society for you if you can't. Fit. In."

The fearsome warden of the Conformatorium, a prison for misfits and troublemakers. Has the hots for Eda. 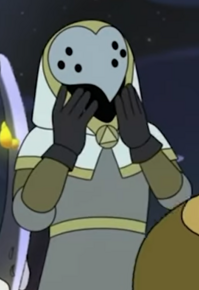 An officer in the Emperor's Coven. 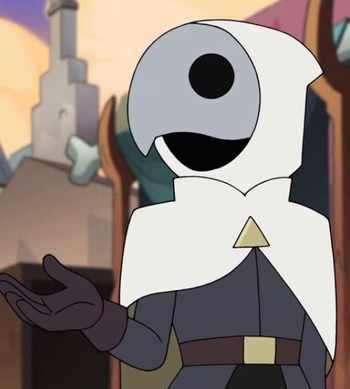 A member of the Emperor's Coven and Lilith Clawthorne's assistant.

The rank and file of the Emperor's Coven, often seen patrolling the streets of the Boiling Isles' cities. The scouts are slightly higher than the Guards in rank, serving on special assignment and as inspiration for young witches.
Abomatons 2. 0 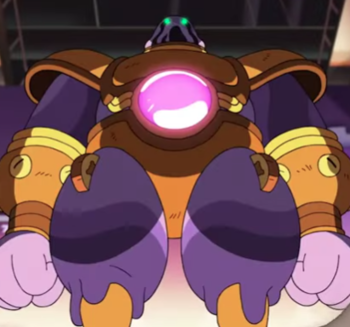 The crowning achievement of Blight Industries, they were created to serve as home security but were all bought by the Emperor to bolster his forces - and to keep them out of potentially rebellious hands.
Advertisement: 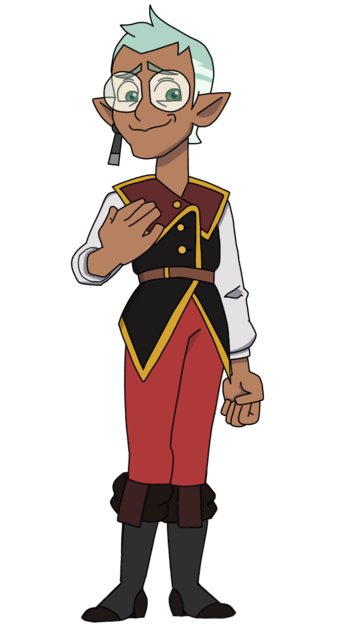 "I don't know what you're running from. But a great witch once told me... Something about punching fears in the face? What I'm trying to say is, don't give up so easily."

The new head of the Bard Coven and secret leader of B.A.T.T. (Bards Against The Throne). Raine is nonbinary and is referred to with they/them pronouns. 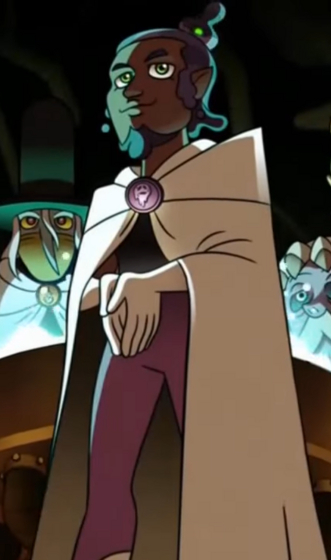 The Head of the Abomination Coven. 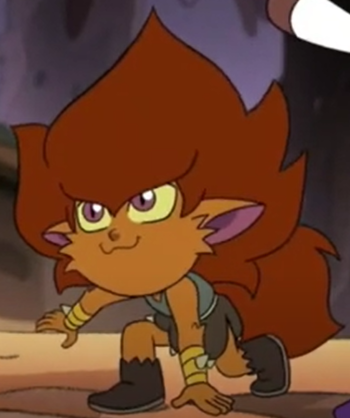 The Head of the Beast-Keeper Coven.

Lilith Clawthorne
See here for tropes regarding her. 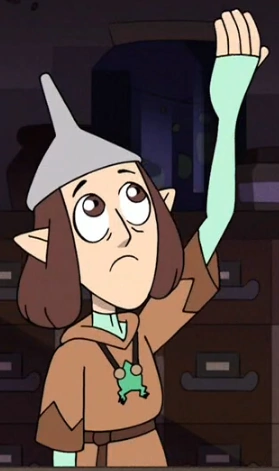 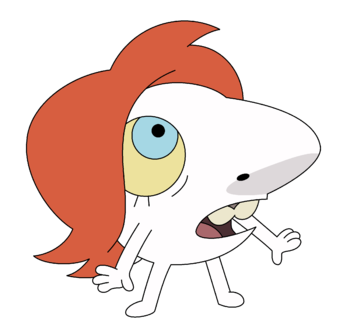 A short weirdo who escaped imprisonment in the Conformatorium. 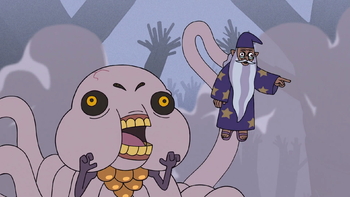 An octopus-like puppeteer demon with a grudge against Eda. 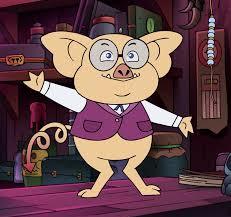 A shady merchant who works out of Bonesborough's "night market". In his introductory episode "Hooty's Moving Hastle" he tries to capture Eda for her bounty. 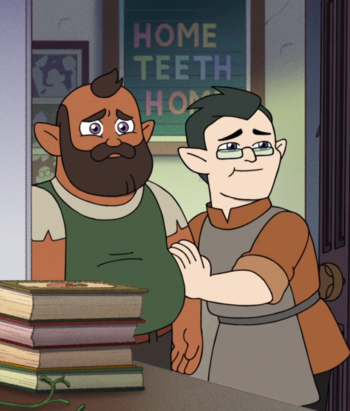 Willow's fathers. They first appear as a cameo in "Understanding Willow", and then make their in-person debut in "Escaping Expulsion". 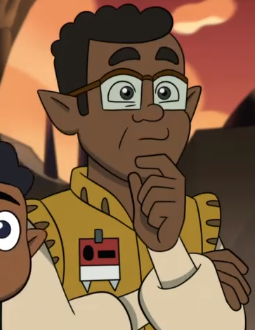 A news reporter and Gus's dad. 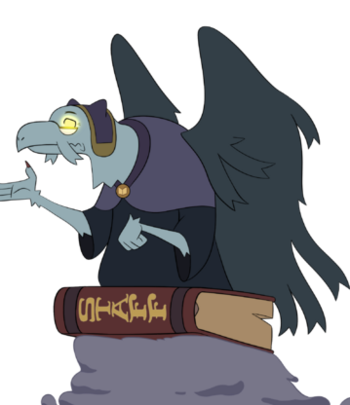 Bards Against The Throne 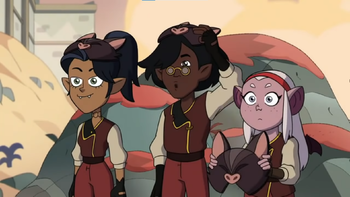 A group of bards who feel the Emperor and his coven are unjustly imprisoning people. Led by Raine, the group tries to find and free all wild witches. 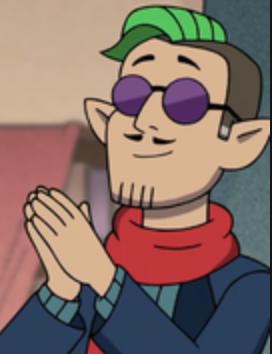 A famous book author in the Boiling Isles who has a large following. 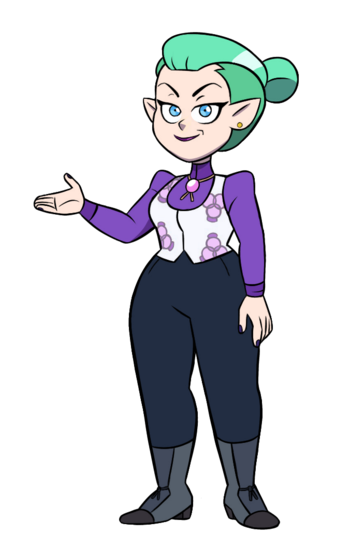 "Mama to Mittens. Remember our deal, make this look good and we'll forgive your recent lackluster performance at school."

Edric, Emira and Amity's mother, and one of the most influential and powerful witches in the social hierarchy of the Boiling Isles. She's part of the oracle coven and works as a salesperson of sorts for Blight Industries. Her debut in "Understanding Willow" reveals her and her husband's involvement in Amity and Willow's ruined friendship.

"…A Blight always upholds their end of the deal."

The Blight siblings' absent-minded but intelligent father. He specializes in creating home security weapons out of abominations with Odalia describing him as the "greatest abomination inventor of our time". Like his wife, he too was involved in Amity and Willow's current broken friendship

"I will find a way to cure you Edalyn. No matter what it takes." 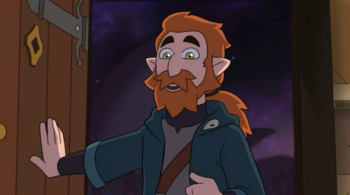 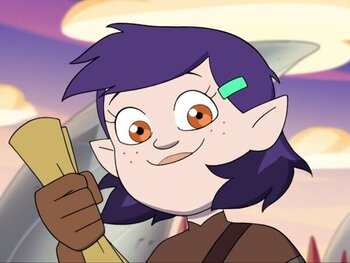 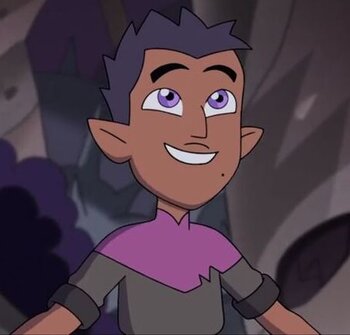 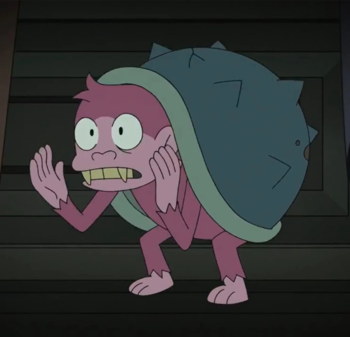 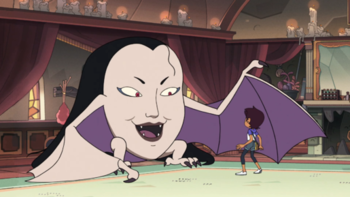 The wealthiest demon on the Boiling Isles, who also looks after abandoned Palismans. She is a large bat with a human face and hair.

A group of nomads who capture and sell the most dangerous creatures in the Boiling Isles. They first appear in "Hooty's Moving Hassle", trying to capture the animated Owl House. 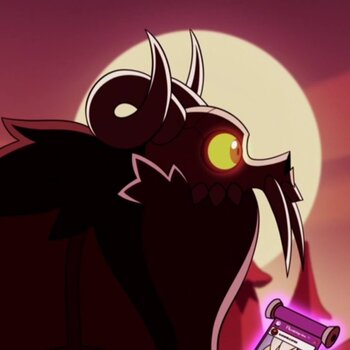 Presumably the missing father of King. 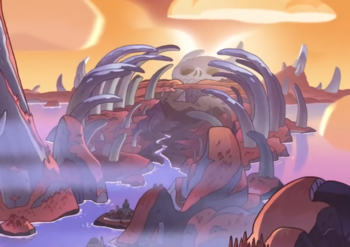 The incredibly enormous humanoid whose body spreads across the Boiling Isles, providing the magic that powers witches' spells.