A race of psychic humanoids long ago thought wiped out in the destruction of the ancient Old World, the Seers live on in the present day through humans that retain part of their evolved minds, capable of awakening their powers and connecting to a mental plane called the Remeditary. The descendants of the Seers feature prominently in the main stories of the Mythos.

Eliza Cortly
Appears in: The City of Never | The Englishman | Sangue Serenissima | Empty Memories and Cold Graves | And to All a Good Night | Loves Lost And Found | The Wolves of War | Over High Seas
"No matter what happens, you must always look to a bright future..." 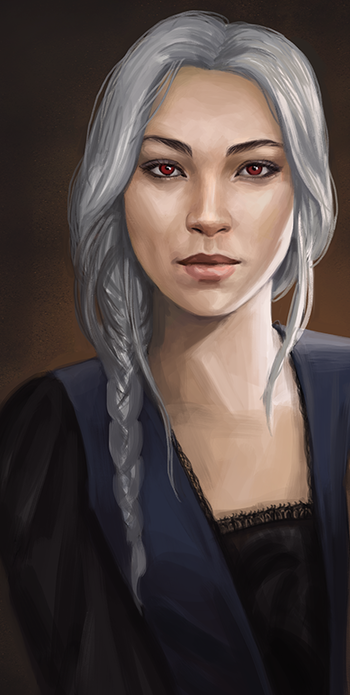 )
One of the oldest Seers alive and the closest thing to a main character with a history centuries in the making, Eliza Cortly is a mysterious, ethereal woman in white first introduced to Michael Seer during his first death. Replete with her own Hidden Depths, Eliza is actually a mentor to Seers all across the world, saving and teaching one Seer after another in a desperate attempt to steer them away from the clutches of the Shadows' Consultant's dark rituals. She has a very storied history, having once been the wife of a chauvinistic Italian nobleman, and partner and eventual lover of Hardestadt Delac beginning in the 1700s
Michael Wilford Seer
Appears in: The City of Never | Diamond & the Daylight | The Wolves of War
"I'll have you know my work as a journalist can be well-paying, more so than any other second-rate cretin on this island!"

A stuck-up journalist from Idaho who works for an unknown magazine in Mexico, and one of the two main characters of the story. After breaking up with his girlfriend Rose Welts in 1994 and moving from Idaho to Onolo in a desperate attempt to pick up his life, Michael spends years moseying around and dreaming of being a world-famous writer without capitalizing on his dreams, with his only written work quickly turned down by publishers. A cynic who's taken the philosophies of his idol H. P. Lovecraft to heart, Michael finds out he may have certain attributes and powers that may make him a valuable asset against the City when it descends on Onolo.

An antique store owner who lives in Onolo, and one of the two main characters of the story. Daniel is a mild-mannered, unremarkable man by nature, with a fascination for odd trinkets and three children. Daniel's wife was murdered by a savage rampage killer named Lester Craw half a year before the start of the story, leaving him to raise his children alone. Although Daniel has tried his best to move on and provide for his children, the increasingly bizarre happenings of the City end up making this increasingly challenging for him, which comes to a head when two of his children are kidnapped by the City – giving him the resolve to go into the City itself to find them, no matter the cost.

A Portuguese Seer and the student of Eliza Cortly, beginning in 1668. Later pursued by the Consultant for its sadistic tortures, Vicente is rescued by a most unusual benefactor...

Elazar
Appears in: The Wolves of War

A Jewish Seer born in 1802, who serves as one of Adam's chief lieutenants in the Sodality of the Aberrant.—-

Julio
Appears in: Sangue Serenissima
"I did it, Signora Eliza! I did it!"

A young Seer who is part of Adam's flock. One of Eliza Cortly's students in Sangue Serenissima.

Jeanne Dreyfuss
Appears in: The Wolves of War

A French-Algerian Jewish Seer who is assisting the French resistance.—-

Aisling Vallee
Appears in: Only A Lonely Heart | Children of Valentine | The Savage and the Sacred

A Seer born of a romance between a Norman man and an Irish woman. Aisling is the lost true love of Eliza Cortly, separated centuries ago from her. By the 1960s, she is Hardestadt Delac's lover, going by the alias "Red".

One of the residents of the long-destroyed St. Howard's and Edison's former friends. Zyra was seemingly a normal thirteen-year-old girl who Edison recalled as having vivid fantasies that worsened when the City attacked the town in late 1996. It turns out Zyra was actually the intended host for Draynak, as she was the artificial Seer that caused the destruction of the Old World when she was linked up to the Old World, somehow having been reincarnated into the form of a normal girl that the Consultant zeroed in on, obliterating the town in the process. Unfortunately, the Consultant murdered her to save face in the City — and, very likely, for its own treacherous reasons as well.