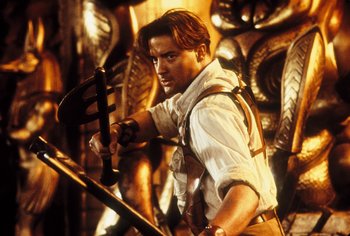 "You know, a couple of years ago, this would have seemed really strange to me. "
Played By: Brendan Fraser
"Oh, I hate mummies."

The main character. An adventurer who served in the French Foreign Legion and eventually learns that he's a reincarnated warrior on a mission to save the world. 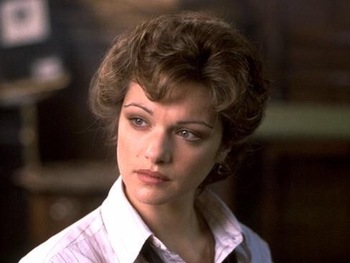 "Having an encounter with a three thousand year old walking talking corpse does tend to convert one!"
Click here 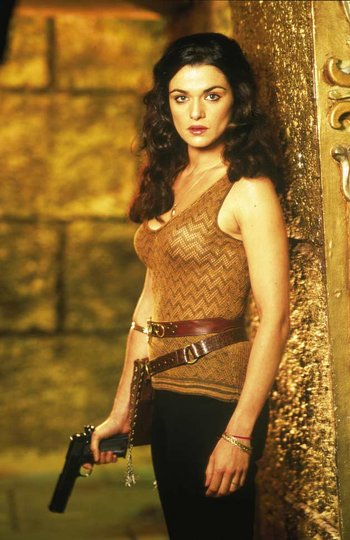 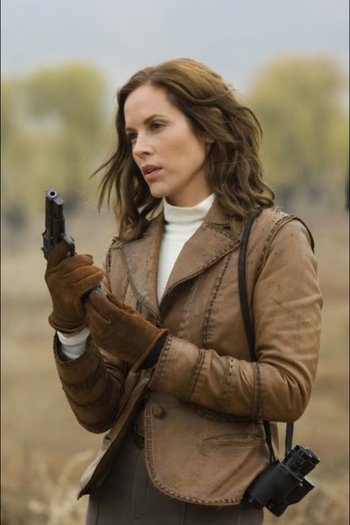 to see Maria Bello's version of the character from The Mummy: Tomb of the Dragon Emperor
Played By: Rachel Weisz (The Mummy; The Mummy Returns); Maria Bello (The Mummy: Tomb of the Dragon Emperor)
"Look, I may not be an explorer or an adventurer or a treasure seeker or a gunfighter, Mr. O'Connell, but I am proud of what I am. I...am a librarian."
Jonathan Carnahan 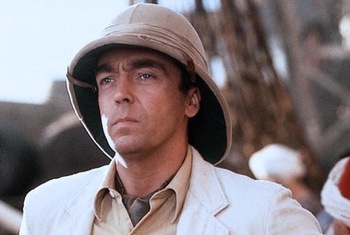 "Be quiet Alex! If there's going to be any hysterics, they'll come from me!"
Played By: John Hannah
"I say, bloody good show, chaps! And did I panic? I think not!"
Alex O'Connell 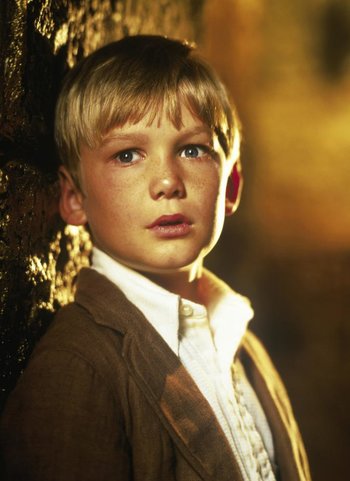 Freddie Boath as Alex in The Mummy Returns
Click here 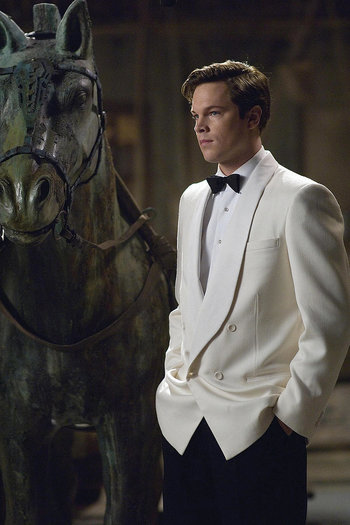 Imhotep and his followers 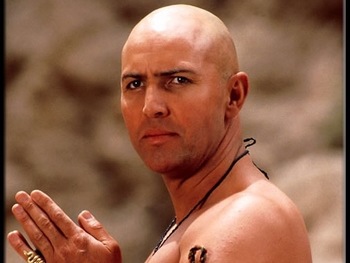 to see his mummified form.
Played By: Arnold Vosloo
"The sands of time have already begun to pour against you."

The Big Bad of the first two movies of the Mummy trilogy.

Back in ancient Egypt, Imhotep was the High Priest of Osiris and the trusted advisor of the Pharaoh Seti I, becoming a close confidant and friend of the man. Despite this, Imhotep formed a hidden romance with the Pharaoh's mistress, Anck-Su-Namun, the two taking many precautions to keep their love a secret.

One night, however, the two had chosen to no longer live in secrecy and decided to assassinate Seti I. While they succeeded in their task, their acts of treason were witnessed by the Pharaoh's daughter, Nefertiri, who managed to alert the loyal guards of her father, the Medjai. Forced to flee, Imhotep could only watch in grief as Anck-Su-Namun committed suicide in front of the approaching guards.

With the intent of bringing his love back to life, Imhotep and his priest stole Anck-Su-Namun's body away to Hamunaptra. Utilizing the sacred Book of the Dead, Imhotep almost succeeded in his dark task before the process was interrupted by the arrival of the Medjai, who proceeded to arrest the high priest and his followers. While his priests were mummified alive, Imhotep was given a much worse fate for his crimes.

With the legendary Hom Dai placed on him, Imhotep was cursed with unholy powers and the effect of bringing about the Ten Plagues of Egypt if he were brought back to life before being mummified alive along with dozens of flesh eating scarab beetles within his sarcophagus, feasting upon him for many years.

Once resurrected, his set goal of once again resurrecting his lost love began anew. 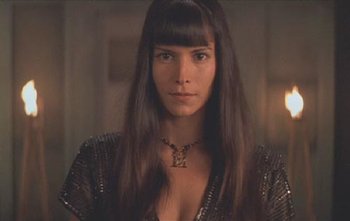 "Put your mask on. Let's not scar that pretty face."
Played By: Patricia Velásquez
"What a bright little child. Your mother must be missing you terribly. If you wish to see her again, you better behave."
Beni Gabor 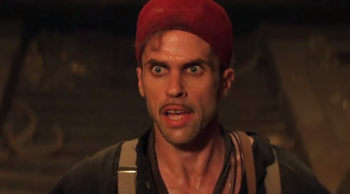 "Oh, your strength gives me strength."
Played By: Kevin J. O'Connor
"It is better to be the right hand of the Devil than in his path. As long as I serve him, I am immune."
Baltus Hafez 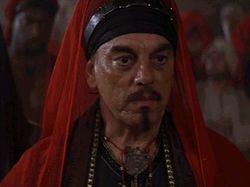 "You two must sacrifice yourselves for me. You shall be rewarded in Heaven!"
Played By: Alun Armstrong
Advertisement:
Lock-Nah 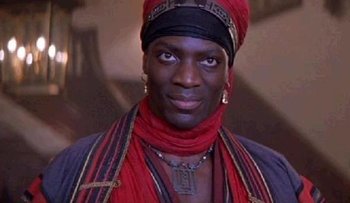 "When the time comes, I shall truly enjoy killing you."
Played By: Adewale Akinnuoye-Agbaje
"Not bad...for a Medjai."
Red, Jacques, and Spivey

A trio of thieves hired to steal artifacts for Baltus Hafez.

The Dragon Emperor and his followers 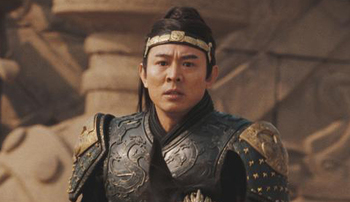 "I raised you for one purpose: to enforce my will on the entire world!"
Played By: Jet Li
"Today you awake to a world in the grip of chaos and corruption. I will restore order. I will retake what is mine. I will crush any idea of freedom. I will slaughter without mercy. I will conquer without compassion. I will now lead you past the Great Wall. Once you cross, you will be indestructible."

The Big Bad of the third film.

A ruthless Chinese warlord who succeeded in becoming the first Emperor of China, Huang was a merciless tyrant who led his troops on a unrelenting campaign of power through ancient China, killing any resistors or assassins along the way. After some time, however, his interests turned to seeking a way to preserve his youth in hopes of extending his reign beyond the normal human life span.

As such, he sought the assistance of a witch known as Zi Yuan, who held the secrets of immortality. After his horrific betrayal of the sorceress though, Huang and his men were cursed to forever be mummified as terra-cotta for centuries until his resurrection.

"Only the pure of heart will sacrifice themselves for the Fatherland."
Played By: Anthony Wong
"Soldiers! Soon, all our training and sacrifice will bear great fruit. It is my dream to raise our Emperor from his tomb. Only he can bring order out of this chaos. Soldiers, tonight our great battle begins!"

The general of a para-militant faction dedicated to the goal of returning Emperor Huang to life, Yang believes that with the help of the resurrected warlord, the turmoil brought about after the Second World War that has left China in a state of turmoil can finally be resolved.

The former bodyguards of the Pharaohs, they are a order of warriors sworn to protect Egypt and the world from the likes of Imothep and the Scorpion King. 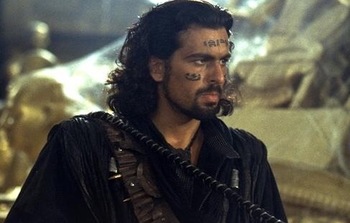 "If a man does not embrace his past, he has no future."
Played By: Oded Fehr
"There is a fine line between coincidence and fate."
Dr. Terrence Bey 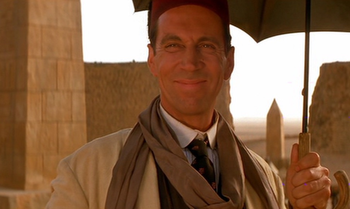 "They're led by a woman. What does a woman know?"
Played By: Jonathan Hyde
"What have we done?"
Mr. Burns 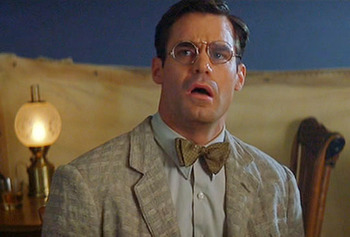 "We're gonna find it, boys, and we're gonna make history."
Played By: Tuc Watkins
"Without my glasses I can't see the deck to cut it, now can I, Daniels?"
Mr. Henderson 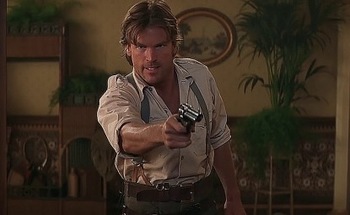 "Say, O'Connell, what do you think these babies will fetch back home?"
Played By: Stephen Dunham
"Hamunaptra, Daniels. That's all you gotta keep telling yourself. Hamunaptra."
Mr. Daniels

"All the money we're payin' you, there better be something under that sand."
Played By: Corey Johnson
"Stupid superstitious bastard." 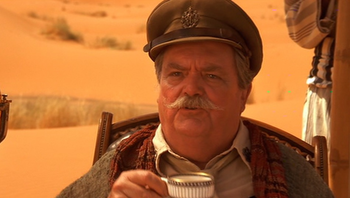 "You know, O'Connell, ever since the end of the Great War, there hasn't been a-a single challenge worthy of a man like me."
Played By: Bernard Fox
"I just wish I could've chucked it in with the others and gone down in flame and glory instead of sitting around here rotting of boredom and booze. Cheers."
Izzy

The true Big Bad of the second film. He (or an ancestor) later got an eponymous Spin-Off film series, see here for its characters.

Alternative Title(s): The Mummy 1999, The Mummy Returns, The Mummy Tomb Of The Dragon Emperor