The titular mentalist, Patrick Jane is a former psychic and stage performer, but took a job with the CBI when the serial killer Red John killed his wife and daughter after Patrick badmouthed him on TV, hoping to exact revenge.

Possessing exceptional knowledge of human behavior, extensive meditative and hypnotic training, a refined memory and superhuman deductive skills, Patrick Jane is one of the most valuable agents of the CBI in the fight against crime. Though technically he's not a cop, just a consultant.

The Leader of The Team, Senior Special Agent Teresa Lisbon of the CBI stands with the impossible task of keeping Patrick in check. Although Jane's antics are annoying and often lands her in deep trouble, she respects him highly, and often supports his theories in the face of skeptical superiors, and even common sense.

One of the special agents of the CBI, and probably the most down to earth of the group. Asian-American of Korean heritage. Before joining the CBI, he was an army ranger, and before that he was a gangbanger called "The Iceman", a fact which Jane finds hilarious (in his defense, it is more than a little Cliché and overblown). He's the calm and collected of the group, rarely showing any emotion at all.

One of the special agents of the CBI. He's an arson specialist who quickly becomes attracted to Van Pelt. The two begin a secret relationship in the second season. He's a nice, gentle man who sometimes serves as comic relief.

The youngest member of the CBI, special agent Van Pelt is the rookie of the team, and often tasked with research. She begins dating Rigsby secretly on season 2, but they later break up, and she gets engaged to FBI agent Craig O'Laughlin. She kills him in self-defense when he turns out to be Red John's mole. After this she undergoes considerable character development as she learns to cope with what happened: dropping the naivety that defined her in early seasons, learning to express her anger and frustrations, but also working to retain the her sweet side and faith in people.

She is hard-working, very bright and often clashes with Jane about her belief in the afterlife.

An FBI agent dispatched to Sacramento to shut down CBI. Sent from the Austin, Texas office to allay fears of corruption due to the Blake Association's reach in California.

The first Special Agent in charge of the CBI unit. He's a good agent and a good boss, but does not like Jane's antics much. He resigns the position after Sam Bosco and his team are murdered.

A Special Agent sent in as Minelli's replacement. She's hard-working and very bright, as Jane remarks just upon meeting her. Madeleine was married prior to her introduction, and is on the middle of getting divorced. She is also the mother of two kids.

The new Special Agent in Charge of CBI, starting from Season Four. A wise man; everyone in our CBI team seems to like him.

He takes over Red John's investigation in the first half of season two. Until Red John's mole, Rebecca, kills him so Jane can be in charge of it again.

The head of CBI Internal Affairs. Due to the nature of his job, a natural antagonist to Jane and the team. Takes the position of CBI chief for a while after Hightower goes on the run.

CBI's Assistant District Attorney. The nature of his work usually puts him at odds with the team.

The director of the CBI.

Rick Tork
Played By: Joshua Bitton
A CBI agent on Haffner's team who late becomes an FBI agent who works with Abbot's team.
Ron and Karl
‘’’Played By:’’’ John Troy Donovan and Karl Sonnenberg
Minor CBI agents across the course of the show.
Marlon Hicks
‘’’ Played By:’’’ Dominic Hoffman.
A member of Boscos team.
Nick Martinez
Played By: Andres Perez-Molina
Another member of Bosco's team.
Roy Carmen
‘’’Played By:’’’ Christian Clemenson
A therapist for the CBI office who deals with Lisbon after the shooting of a Red John accomplice. 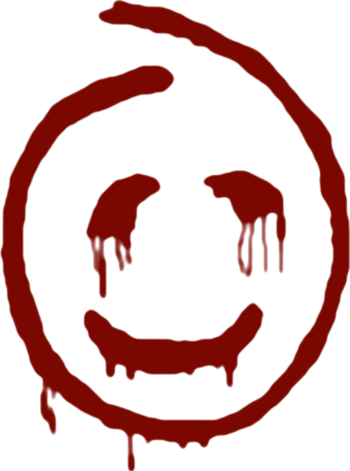 Tyger! Tyger! burning bright
A mysterious and dangerous Serial Killer who murdered Jane's wife and child after the former, in his capacity as a television "psychic", gives a phony and insulting psychic profile calling Red John "weak". It was the last time he would murder for his original pathology (torturing and killing women)- all his victims in the series are either to cover his tracks or to mess with Patrick Jane, or otherwise to avenge an "insult" such as "cheap imitations" of his work.

While Jane is hell-bent on tracking Red John down and killing him, Red John seems fascinated by Patrick and doesn't make any attempt to kill him, instead playing subtle Criminal Mind Games and acting mostly either to screw with Patrick or cut off any leads that might come back to him. Neither his identity nor his goals are confirmed until Season 6 but, unusually for a Serial Killer, he seems to be at the head of an entire network of murderers and serial killers, many acting independently but seemingly ready to kill or even die for him.

The head of Visualize, a Church of Happyology in California. Besides Red John, he is one of the few criminals whom Jane fails to bust so far. Well, he's not exactly criminal, but shady and manipulative enough that we cannot consider him the good guy either. He's shown to have connections here and there; in fact, he knows Red John's network enough that he is able to tell Jane where Kristina Frye is.

Formerly in charge of the matchmaking service, Symphony, Erica first came into contact with the CBI when Jane deduced she murdered her husband for trying to sell their company. Manipulative, intelligent and charming, she's one of the few villains who poses a challenge to Jane.

To the outside world, billionaire Tommy Volker is an affable philanthropist, on the inside, however, he's a cold-blooded and sadistic Corrupt Corporate Executive whose greed led him to wiping out an entire Amazonian village. Slippery enough to avoid paying for his crimes, Lisbon is still determined to bring Volker to justice.

An allegedly reformed pedophile introduced in season 4 who is constantly wrongly suspected of more serious crimes. He has a particular grudge against Lisbon and Jane as he feels they are harassing him, and is eventually kidnapped and tortured after Jane frames him as a Red John suspect. In season 6, he snaps and starts targeting the former CBI teammates in revenge.

A prominent member of an equity firm and secretly the mastermind behind a ruthless ring of human and organ traffickers.

Lazarus
Played By:Aubrey Deeker
Joseph Keller Jr. AKA Lazarus is a serial killer who clashes with the cast in the series final arc.
Dr. Linus Wagner
Played By: Zeljko Ivanek
A psychiatrist, and the shows second killer (with the first being a minor character exposed by Jane within the space of the opening scene).
Charles Milk

Tommy Volker's chief assassin.
Anthony Tremel
Played By: John Hensley
Michael Ridleys henchman.
Donny Culpepper
Played By: Stephen Warshofsky
A career criminal who is a person of interest in one case, and hired by Jane to rob LaRoche's safe in a later one.
John Hutten
Played By: Paul Schulze
A bank robber who the team goes after in season 5, and is later a suspect in Haibach's attacks on past CBI agents.
Steve Rigsby
Played By: William Forsythe
Rigsby's father, and a career criminal who is involved in two of the gangs investigations.
Benjamin Marx
Played By: Aaron Lohr
A financial manager and killer the team encountered.
Jason Lennon
Played By: Craig Cousins
A trustee at a woman's shelter and accomplice of Red John.

An FBI agent that serves as Van Pelt's love interest in season 3.

An FBI agent who takes over Darcy's investigation in Season 5.

One of Schultz's agent, partner with Mancini.

A Homeland Security Agent who's been introduced in Red Dawn. Has been pursuing the Red John case for a while and is very interested in Jane's progress.

Steven Wench
Played By: Joseph Will

Introduced as "Brother Steven", a teacher at the Visualize College, he is later revealed to be an undercover FBI agent working with Laughlin.

Gabe Mancini
Played By: Joseph Will
An FBI agent who works with Smith early in Season 5.
Agent McClay
Played By: Sean McClay
A member of Kirkland's Homeland Security Team.
Bill Peterson
Played By: Dylan Baker
The unscrupulous head of the San Antonio DEA, and a former boss of Abbot.
Agent Collins
Played By: Shannon McClung
An FBI agent at the Dallas Field Office.
Ken Spackman
Played By: Tim Griffin
An FBI agent in Dallas specializing in organized crime cases.

A prostitute who appears on Season Four and becomes a recurring character. On her first appearance, she withstands Cho's stoicness, insisting that if she were to cooperate Cho ought to show common courtesy. At the end of the episode Cho gives her a job as an informant. And later on they date. And then break up.

A millionaire that appears in two episodes so far, "Redline" and "Red Hot".

A proclaimed psychic whom Jane repeatedly calls out for being a fraud though he does seem to care for her. She insists not only that she is a genuine psychic, but that Patrick is a real psychic too, albeit in denial and one who was a really a con-artist in the past.

A humorless medical examiner with the Sacramento County Coroner's Office. Spars with Jane once a season.

A public defender who was being interviewed by Erica Flynn the night she killed her husband, thus becoming her alibi. She begins dating Rigsby, and after a few months later they're both shocked upon finding out she's pregnant. She becomes the mother of their child, Ben Rigsby, towards the end of the season.

A minion of Red John and self-proclaimed lover of Patrick Jane. She reaches Jane in the season four finale after he gets deliberately fired from the CBI by Wainwright.

Judge Manchester
Played By: John Rubinstein
A Federal Judge who appears in season 5.
Rosalind Harker
Played By: Alicia Witt
A blind woman who was once in a relationship with Red John.
Jason Cooper
Played By: Robert Picardo
One of the senior Visualize Cardinals.
Tommy and Annie Lisbon
Played by: Henry Thomas and Madison Mc Laughlin
Libson's youngest brother and his daughter, who work as bounty-hunters.
Pete and Samantha Barsocky
Played By: Mc Gainey and Tangie Ambrose
Old carnie friends of Patrick.
James "Jimmy" Lisbon
Played By: Rob Belushi
One of Lisbon's brothers.
Daniela Welker
Played By: Zuleyka Silver
A victim of Ridley's trafficking ring.
Angela and Charlotte Jane
Played By:' Maxine Bahns (Angela), Isabella Acres (Charlotte), Dove Cameron (hallucination of teenage Charlotte)
Jane's late wife and daughter.
Lena Abbot
Played By: Christine Adams.
Abbot's wife, whose application for a prestigious job is threatened by his past.
Dr. Sophie Miller
A therapist who helped Jane deal with the trauma of his family's death and is a suspect in an early case.
Karen Cross
Played By: Missi Pyle
A TV show host and former prosecutor involved in two of the teams cases.
Judge Patricia Davis
Played By: Amy Aquino
A judge who Lisbon appeals to during the Tommy Volker investigation.
Stan Lisbon
Played by: Derek Phillips
The eldest of Lisbon's younger brothers.
Brother David
Played By: Creator/Stephen Hack
A Visualize member who seems to serve as a recruiter.
Tom and Terri Maier
Played By: David Carey Foster and Ely Pouget
The parents of the San Joaquin Killer's first victim.
Senator Eileen Dawkins
Played By: Judi Evans
A Senator whose in Lisbon's season 5 poker circle.