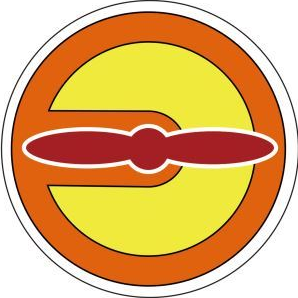 A six-women mercenary flight in semi-permanent employment of the Ouni Company. Founded by Reona and Zara, the squadron based mainly in the town of Rahama doing cargo protection the Ouni Company is hired for against sky pirates. Though generally unconcerned by the state of Ijitsu's politics, they clash with various factions because of their association with Rahama and the radical politician Julia. They all fly Nakajima Ki-43-I Hayabusa with marked with their personal tail art, camo, and color.

A Rahama-native, hot-headed pilot with natural rudder control talent. When she was young, she had a chance encounter with the only remaining Yufang man who inspired her to see the world in an airplane. Free-spirited and disliking rules, the only things that could restrain her is her captain Leona. Because of her temper, she's often referred as "Kylie the Lightning Storm". She really likes eating pancakes. Kylie's personal decal is a red falcon, inspired by her mentor's own personal mark.

Kylie's childhood friend, a daughter of a now destitute nobleman. A pilot with great situational awareness, but often blinded by her utter hatred for crooks, she's aggressive while also maintaining a layer of elegance such that she's known as "the Fierce". Flying as a mercenary to support her parents, who are oblivious of their daughter's career choice, she's a greedy miser when it comes to money. Her personal is a scythe hovering behind a white rose.

The captain and founder of the Kotobuki Squadron, the pilot with most flight time under her belt. The most by-the-book pilot, but a lot more hotheaded when she was younger. A veteran of the Rinouchi Great Air War, she made name for herself as "the Tenacious Reona" because she was notoriously target-fixated and aggressive. When her hotheadedness caused her trouble in the war, she was saved by Isao and she considers it a life debt. Though stern, she often let her emotion clouds her judgments. Her personal mark is the word "寿" (Kotobuki), stylized as a lightning bolt. 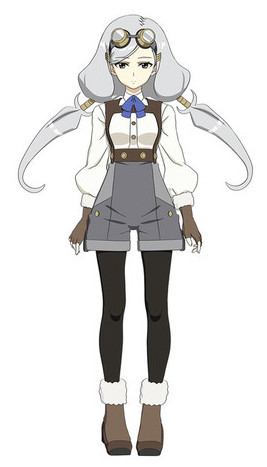 The younger sister of Allen, Leona's old friend, who she'd taken in after Allen was crippled by unknown assailants. Stone-faced and analytic, a genius pilot of technical knowledge but clueless when it comes to social cues. Now supporting her brother's as a research assistant and their family's breadwinner, she's generally subservient to anyone in her squadron though not afraid to speak her disagreements. Despite how she looks, she greatly respects her teammates and enjoys her times with them. Her personal mark is a bidirectional arrow. 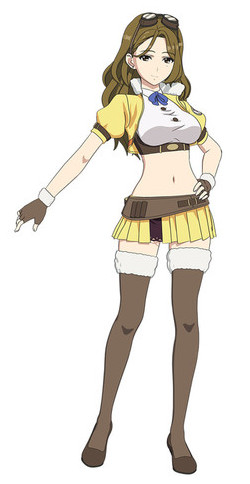 The Kotobuki Squadron co-founder and Reona's long-time vice-captain, a mysterious woman who she met in Sapoh Airfield at the Rinouchi Great Air War. An ever present support, in air or on ground, she tends to put herself before a threat as a cover or to confuse the enemies. An unabashed drunkard and flirtatious seductress, yet nevertheless forever a gentle role model. Loyal to Leona first and foremost, she watches over everyone with some aloofness. Her personal mark is a smoking funnel.

The youngest member of the squadron, a former street urchin who became pilot from very young age. The same sort of hothead as Kylie, they often butt head over even the smallest of arguments. Because she's short, she's the pilot with most negative-G resistance, which in turn cause her to abuse this perk by making a lot of dangerous stunts. Childish, easily amused, excitable - she often takes pleasure in picking fights with adults above her weight class. Really likes the sea because of the influence of the picture book her brother read to her. Her personal mark is a cartoonish baby seal from the picture book.

A cargo delivery company based in Rahama and of which the Kotobuki Squadron pledged their service. Owned by Madame Lulu, though nominally affiliated with the town of Rahama, the company offers the Kotobuki's protection service on anyone who could pay the price. Their flagship is Hagoromo-maru, marked by her hishimochi-colored tail. 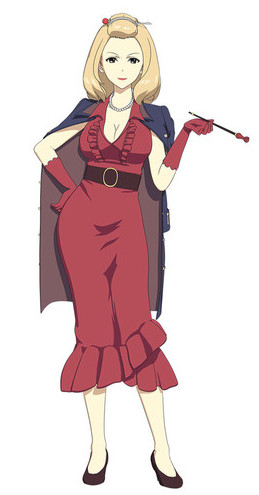 The owner of the Ouni Company. An intimidating woman that is all about professionalism. A harsh but fair boss, she adores her crew yet keep them at arm length.

The forever suffering First Officer of the Hagoromo-maru. While an opportunist, he's a indecisive and henpecked man among a crew full of headstrong women. 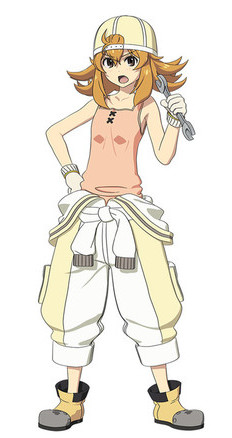 The Ouni Company's crew chief. An artisan of a mechanic, she's a perfectionist with short fuse when it comes to aircrafts. While she looks like a young girls, she's older than any of the Kotobuki pilots.

The Hagoromo-maru's nervous bartender. A former gunman whose wife left him because of his continuance obsession with guns. 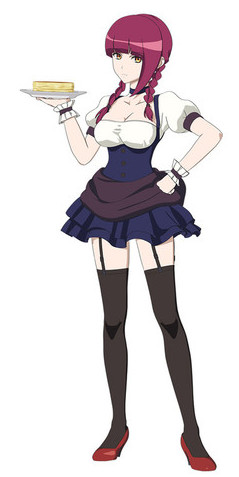 The Hagoromo-maru's barmaid and cook. A cold and mysterious woman who most people don't know the past of. 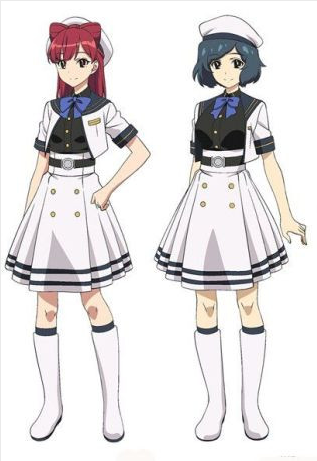 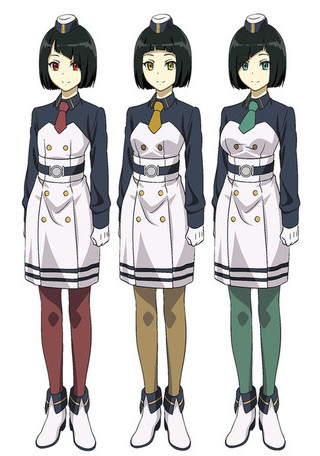 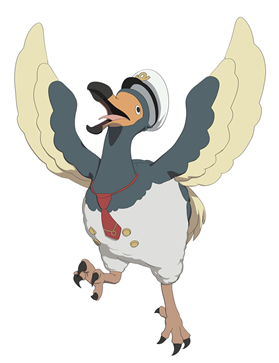 The captain of the Hagoromo, who happens to be a flying Dodo bird.

The five-man freelancer mercenary squadron from Nanko that worked for Ouni Company in Episode 1, before they got wiped out in their engagement against the Doborok Pirates. They cross paths again with the Kotobuki as fellow mercenaries hired in Areshima, but only Fernando Utsumi and Adolfo Yamada remain in the squadron. They exclusively fly the Kawanishi N1K-J Shiden.

Kylie's mysterious purple snake Zero Model 32 rival. A woman with boundless thirst for excitement, she aids just about anyone who would give her opportunity to challenge the strongest side.

The captain of Shouto Vigilante. She force-lands in Hagoromo-maru's hangar after being attacked by Isao's bomber entourages despite Shouto being Ikesuka's long time ally. A clumsy yet competent pilot, she along with the rest of Shouto Vigilante join anti-Union coalition in their Kawasaki Ki-61 Hien.

Twin veteran pilots who used to be Leona's war buddies. Musako is the older twin and Higako is the younger one. They're now working as postmen.

A magician turned ace pilot turned businessman, he's a politician - later mayor of Ikesuka. A war hero in Rinouchi Great Air War, he saved Leona when she was still a new pilot. Julia's political rival and the founder of the Brotherhood of Freedom Union, he's a childish man with frightening competence in a plane. He's obsessed with the Yufang and intends to monopolize the Yufang technology that come out of the dimension holes that show up, going into an Ijitsu-spanning conquest to do so. He's first seen flying an Aichi B7A Ryuusei with his butler, before choosing a Kyushu J7W Shinden as his main aircraft.

Isao's loyal butler, even in his depravity. He flies a Ki-64 in the battle against the anti-Union coalition.

First introduced as the Human Resources Department Head for the Elite Forces, he is revealed to be one of the Union's spies that infiltrate the pirate clans not associated with Isao to steal their planes. A total scumbag who thinks only of himself, he initially flies the Elite Force's Ki-43-III Hayabusa before switching to a Kawasaki Ki-100 "Type 5 Fighter" after showing his true allegiance.

Madame Lulu's childhood friend and a wealthy councilor of the city of Gadoll. A headstrong woman who has an unsavory reputation because of her outspoken personality. Despite somewhat brash and pompous, she's honest, charitable, and concerned of the state of Ijitsu.

Kate's brother, who studies the Yufang and the dimension holes that randomly appear around Ijitsu. Reona's old friend, he was crippled by unknown assailants during one of his research.

Very obviously the Mayor of the town of Rahama. He used to be a mercenary, and his personal plane, a J2M Raiden, is on public display.

Kylie and Naomi's mentor. He was the last Yufang man who remains in Ijitsu after the hole that connected the two world disappeared 70 years ago.