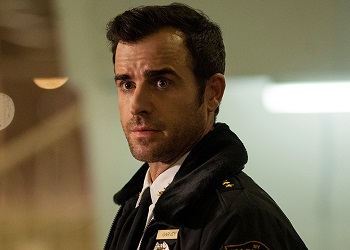 Mapleton's chief of police and a father of two, he is trying to maintain some semblance of normalcy in this new world. The way his family has fallen apart since The Departure, (or in some cases, were falling apart even before the Departure) puts more and more of a strain on him. He's secretly terrified that he might go mad the way his father has, and the fact that he's having blackouts where he's implied to function normally for hours but is completely unable to remember any details afterward isn't exactly helping... 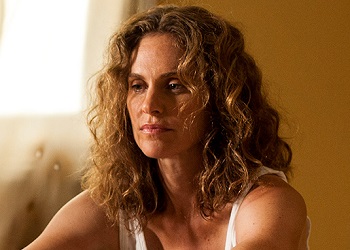 "I think I'm supposed to stay broken. Maybe we all are."
Played By: Amy Brenneman

Kevin's wife and Tom and Jill's mother. Before the Departure she was a successful psychologist, but she abruptly left her entire life behind shortly after the Departure to join a nihilistic cult called The Guilty Remnant. Eventually it's revealed that she was in the early stages of pregnancy just before the Departure only for the fetus to Depart while still in utero, and she could see it happening due to being in the midst of an ultrasound appointment.

The events of the first season, particularly the near death of Jill leads her to leave the Guilt Remnant and begin working on a project to rescue other members, give them deprogramming, and help them reintegrate into society. 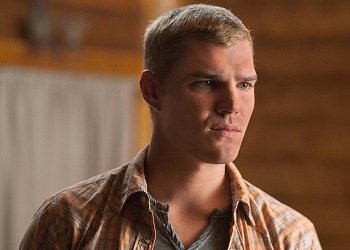 Laurie's son from Laurie's previous marriage, who has been adopted by Kevin, who treats him as if he were Kevin's biological son in all ways. Prior to the first season, he had dropped out of college and taken refuge with a mysterious guru called "Holy Wayne". While at Wayne's compound Tom operated as Wayne's go-to man for many tasks and errands, despite the fact that he never quite embraced Wayne as thoroughly as most other members of the group.

After Wayne's compound is attacked by the government, Tom escapes and is given the task of body guarding Christine, one of Wayne many groupies/followers who Wayne slept with, and is now pregnant with Wayne's child. Months in isolation with little word from Wayne only increases Tom's doubts and questions about the man. This comes to a head when he discovers another man looking after another one of Wayne's pregnant followers, who had been given the exact same spiel, nearly word for word, that Tom had. After Christine gives birth and then leaves him and the baby, Tom travels back to Mapleton and leaves the child on his father's door step. While there he encounters Laurie.

In Season 2, Tom has joined Laurie in her efforts to save people from the Guilty Remnant cult, by infiltrating different chapters of the cult, find members who don't appear to fit in or be able to go along with the cult's rules, then getting them out and into Laurie's therapy. The stress of doing this is taking quite a toll on him, however, and he has turned to drinking heavily to get by and appears to be under chronic depression and expresses a sense of missing the certainty of being in a cult. 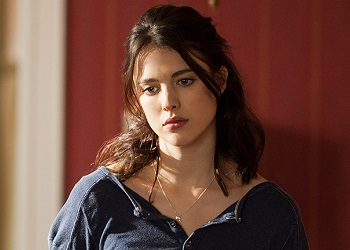 Kevin's teenage, straight-A student daughter who has a difficult relationship with him. She seems to be living in a state of pained depression and sees the world around her as hollow and meaningless. 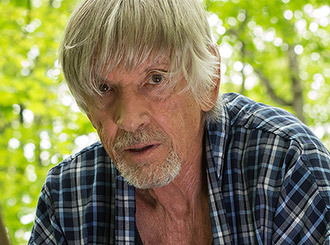 Kevin's father and the former police chief. After the Departure he began hearing voices and burnt down a library, after which he checked himself into a mental institution.

In General
A highly nihilistic cult that is obsessed with The Departure and seems to be set on never letting anyone move past it. Fully initiated members dress entirely in white, chain smoke (likely as an attempt to slowly kill themselves), sever all attachments to outside society, and refuse to speak, communicating solely through the written word. They also try to recruit further members by stalking people, especially those affected by the Departure. That last one earns them the ire of many, many people, and they are frequently attacked for this and other antisocial actions.
Patti Levin 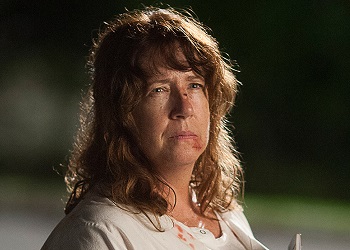 The leader of the local chapter of The Guilty Remnant in Mapleton. 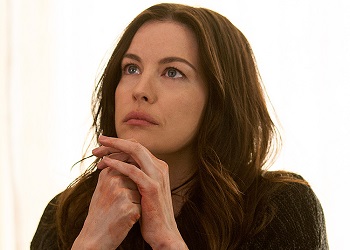 An engaged woman whose mother died the day before the Departure, it's strongly hinted that shed spent the years since in something of a Heroic BSoD, unable to move on with anything in her life (including ever actually marrying her fiancé) as time went past. She was one of the people stalked incessantly by the Guilty Remnant, and eventually went to see what they were all about and became a member.

In General
Holy Wayne's Community is an isolated cult that includes Tom Garvey. Wayne's specialty lies in somehow taking away the pain of people by hugging them (for a modest fee), and considering how many people are in pain after the Great Departure, that means business is going well for Wayne. Unfortunately it's going a little too well; when his clientele starts including government figures, it becomes feared that he will use his influence to pry secrets and confidential information out of them, and his cult becomes a target to be eliminated in the name of national security. As of the end of Season 1, Wayne has been killed, and the survivors of his cult scattered and cut off from each other, so the cult is effectively gone.
'Holy' Wayne/Wayne Henry Gilchrist Jr. 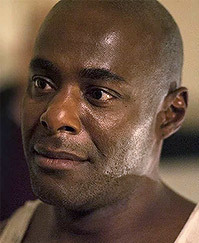 An enigmatic cult leader who lost a son (hinted to be a young child) during the Departure. He has people convinced that he can take their pain away with magic hugs. While Wayne has many people, both members of his cult and outsiders, proclaiming that he's the genuine article, he also displays behaviors that seem like classic examples of a con man cult leader taking advantage of his followers, not the least of which is that he sleeps with multiple young Asian girls to "recharge his powers". 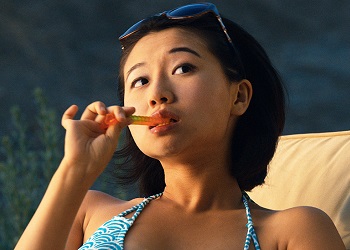 One of Holy Wayne's many followers/groupies/lovers, but apparently she's got a special and mysterious meaning for him. She's also a friend of Tom's, who is obviously attracted to her but unable to act on it. 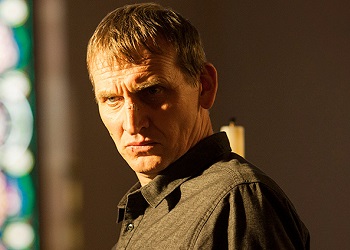 "If we can no longer separate the innocent from the guilty, everything that happened to us, all of our suffering, is meaningless."
Played By: Christopher Eccleston

A priest and editor of a self-published tabloid that aims to show that the Departure was not the Rapture and that those who were taken generally weren't better than or any more special than those left behind. In the early episodes his family's privately owned church is in major financial trouble and in danger of being lost, while Matt also has to deal with being The Caretaker for his wife, who was injured in a car accident in the middle of the Departure due to having to be his designated driver.

Prior to the start of the second season, he travels to Jarden, Texas, a town that is the only one of its size in the world to not suffer a single Departure. The first night there his wife Mary woke up, (before relapsing to her comatose state the next day) which convinced Matt that Jarden really is different, that it's blessed or protected somehow. He shared this information with Nora, which made her determined to go there herself, and led to the Garvey's being present for all the upheaval of Season 2. 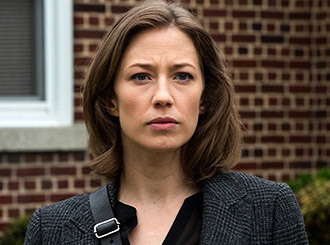 A wife and mother who is suddenly neither after the Departure as her husband, son, and daughter were all taken. Prior to the Departure she was interviewing for a position on Lucy Warburton's election team, she now works interviewing people who lost loved ones in the Departure for the government, as a step those people have to go through to be financially compensated for the Departed. (And with the agenda of trying to find some pattern among those who were taken.) She's also Matt's sister.

After beginning a relationship with Kevin Garvey in the first season, season 2 sees selling her house for a large sum of money to people researching the Departure, and convincing Kevin and family to move to the town of Jarden in Texas, the only town in the world of its size or larger to not suffer a single departure, after Matt raves about the town. She uses most of the money she made from selling her house to buy a house in Jarden when her and Kevin's initial plan for a six month lease doesn't work out, because, as Jill points out, Nora desperately needs someplace that she can feel safe. Between events in Jarden, Kevin's growing instability, and Matt's problems, however, she is soon feeling very overwhelmed. 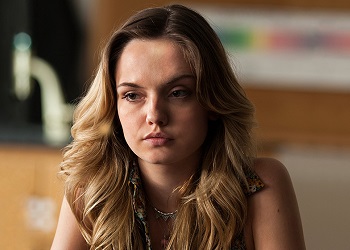 A free-spirited high schooler, friend of Jill's, who seems unfazed by the rapture. 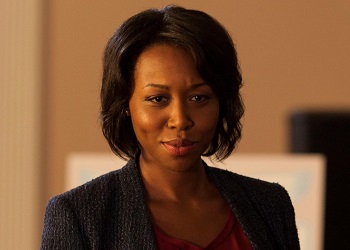 "They're heroes because nobody's going to come to a parade for "we don't know what the fuck happened" day."
Played By: Amanda Warren

A man who seems to understand that times have changed and addresses it head-on—often violently.

A neighbor of the Garveys when they move to Miracle. He is in charge of the volunteer fire department, and is also something of a vigilante who intimidates or worse people who try to claim supernatural influence or such in Miracle.

In Season 2, John's unhappy wife who hates it in Miracle but feels unable to leave. After the stress of Evie's death, she and John divorce for good and she largely leaves the series.

A mystery woman hunting for Kevin Garvey in Australia.—
The Playfords
Grace's family, who died in the outback after leaving home to find her post-Departure.—