This page lists characters appearing in the Disney novel series The Kingdom Keepers and its Sequel Series The Return.

open/close all folders
The Kingdom Keepers

The Group as a whole: 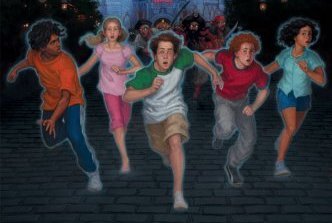 (L-R) Maybeck, Charlene, Finn, Philby, and Willa
A group of middle school students selected by Disney to serve as models for an experimental holographic tour guide program for the Disney theme parks. After the filming is complete, they find themselves appearing as holograms in the parks while they sleep, where they learn that they have been chosen to help thwart a group of Disney villains seeking to Take Over the World. 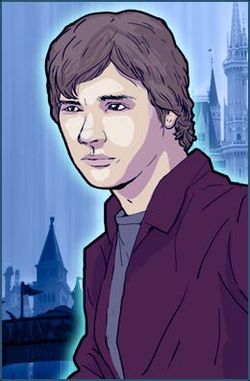 A boy who modeled for Disney's DHI program and now finds himself being groomed to be the leader of the Kingdom Keepers. Initially reluctant to participate in the battle against the Overtakers, over time he comes to accept the responsibility of battling the Disney villains. 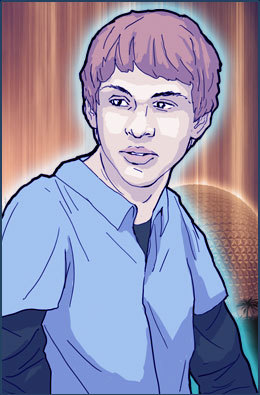 Another model for Disney's DHI program and the team's computer expert. He provides the team with information ranging from park trivia to technology. 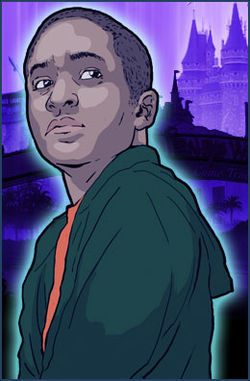 A model for the DHI program. Despite his muscular physique, he's actually an artist.

The group as a whole:

An alliance of Disney Villains lead by Maleficent who seek to take control of the Disney theme parks and from there Take Over the World.

The demonic entity from the 1940 Disney film Fantasia. He is the supreme leader of the Overtakers and the Arch-Enemy of Mickey Mouse.

The main antagonist of 101 Dalmatians and one of Maleficent's lieutenants. Whenever Maleficent and Chernabog are incapacitated or captured, she and the Evil Queen step up to lead the Overtakers.

The infamous queen from Snow White and the Seven Dwarfs. Whenever Maleficent and Chernabog are unavailable, she and Cruella serve as temporary leaders of the Overtakers.

The voodoo priestess from the Pirates of the Caribbean film series. She holds a high position in the Overtaker's ranks, and is almost on equal footing with Maleficent. after the death of Maleficent at the end of the sixth book, she takes command of the remaining Overtakers and leads them in attempting to complete their master plan. At the end of the original series, she escapes capture and is last seen working her magic on Maleficent's remains.

The heroic Disney characters who aren't aligned with the Overtakers in any way, shape, or form. Though they're initially reluctant to get involved in the battle between the DHIs and the Overtakers, over time they start helping the Kingdom Keepers in their quest to defeat the Disney villains once and for all.

The titular princess from The Little Mermaid. She frequently appears as an ally of the Kingdom Keepers, providing them aid when the going gets tough.

Mickey's Love Interest and de facto leader of the good Disney Characters in his absence. She often appears as an ally of the Kingdom Keepers.

The employees of Disney created the DHI program as a means of combating the Overtakers in the modern age. Although many of them support the Kingdom Keepers in their efforts to save the kingdom, the higher ups tend to be an Obstructive Bureaucracy when they want the heroes to do things their way.

The head of Imagineering division at Disneyland. Joe serves as a major source of support for the Kingdom Keepers at the end of the original series and beyond, but frequently butts heads with them over different methods of combating the Overtakers.

A Cast Member who works closely with Wayne and Joe at both Disney World and Disney Land, frequently in the role of Dapper Dan. He's actually the youngest son of disgruntled former employee Amery Hollingsworth, working to stop his family's destructive organization and preserve the magic of Disney.
The Legacy of Secrets

Tropes that apply to the whole group:

A conspiracy started by disgruntled ex-Disney employee Amery Hollingsworth with the single goal of destroying Walt Disney's company. Upon Hollingsworth's death, his son carried on the work that his father started.

A disgruntled Disney employee who attempted to sue Walt Disney for allegedly stealing characters that he created. The lawsuits failed, and Hollingsworth instead began a campaign of darkness to bring down the Disney empire from within. His actions lead to the existence of the Overtakers in the original series.

A mysterious entity approached by Hollingsworth Sr. to help bring the Disney villains to life.
The Fairlies

An assortment of kids of varying ages who possess unexplained supernatural powers. The one thing they all have in common is that the government is baffled by their powers and studies them at a secret facility in Baltimore.

A girl in Finn's class who becomes involved in his fight against the Overtakers. Although initially regarded with suspicion, she and her "sister", Jess, have since become full-fledged members of the team.

A mysterious girl who pops up in the first book and appears to be connected to Maleficent. She's later revealed to be Amanda's "sister" Jess, having been brainwashed by Maleficent since before the series began.

A girl living in Barracks 14 who Jess and Amanda contact in Shell Game to assist the Kingdom Keepers aboard the Disney Dream. She escapes from the barracks and continues to help the heroes for the remainder of the series.

One of the girls from Barracks 14.

Finn's mother, a former NASA rocket scientist. She's initially skeptical of her son's nighttime activities, but eventually becomes an ally of the Kingdom Keepers, providing rides to and from the parks when required and helping them decode messages and solve riddles.

Maybeck's aunt and guardian. Outside of Finn's mother, she's the parent most supportive of the Kingdom Keepers' cause. She runs a pottery shop where her nephew helps out and the other Keepers frequently stop by to exchange information and brainstorm plans.

Wayne's daughter and an ally of the Kingdom Keepers. Although the Kingdom Keepers are initially suspicious of her, she quickly proves herself and becomes a go-between for the Keepers to communicate with both her father and the other Disney characters.

Finn's best friend from school and one of his only friends outside of the Kingdom Keepers.

A conspiracy theorist Jess meets with extensive knowledge of Disney history, more specifically, the urban legends surrounding disgraced ex-employee Amery Hollingsworth and his Legacy of Secrets. Though Jess and Amanda are initially skeptical of his theories, they quickly realize that there are things going on that line up with what he's talking about, and he quickly becomes involved with the girls' efforts to unravel the mystery.