Characters / The King of Fighters '97
aka: The King Of Fighters The Orochi Saga 97

See the folder below for tropes on characters returning from past entries: 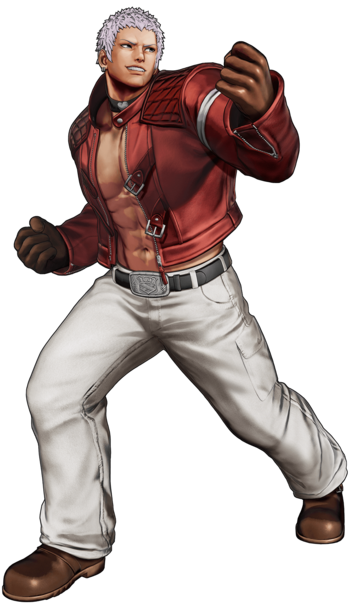 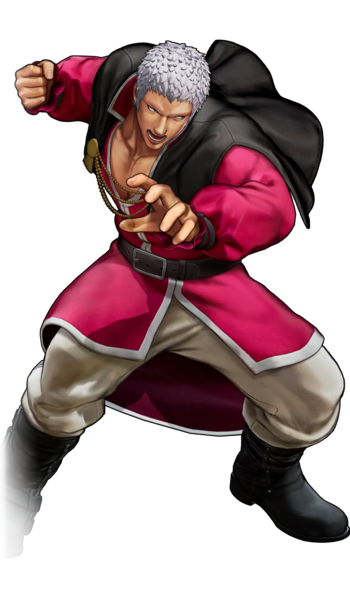 "Hmph. This ain't gonna take long."
"I'll crush you like the trash you are."
Origin: Japan

Fighting style: Power attacks (Yashiro), the power of Earth granted by Orochi (Orochi Yashiro)
Voiced by: note Makoto Awane (KOF '97-2002UM), Keisuke Hamaoka (KOF All-Star-current), Shinichiro Kamio (The King of Fighters for Girls), Megumi Han (All-Star, Female version)
Playable in: note '97, '98/UM, 2002/UM, XV
The guitarist of the band C.Y.S., Yashiro is the powerhouse of the New Face Team. Alongside his bandmates Shermie and Chris, he entered the King of Fighters '97 tournament to get revenge on Iori for stealing one of their gigs...or so he claimed. In actuality, Yashiro is a member of the Hakkesshu, a clan dedicated to serving the will of the legendary eight-headed serpent Orochi and designated as one of the deity's Four Heavenly Kings. His true power is the ability to control the element of earth, and his true motive for entering the tournament was to gather energy in order to revive Orochi alongside his teammates and fellow Hakkesshu members. After being defeated, he and Shermie sacrificed themselves in order to resurrect Orochi through Chris, committing suicide by tearing out their own throats. In XV, however, he and his teammates are brought back to the world of the living due to the defeat of Verse. Interested in the power that revived him, he enters KOF once again.
Shermie 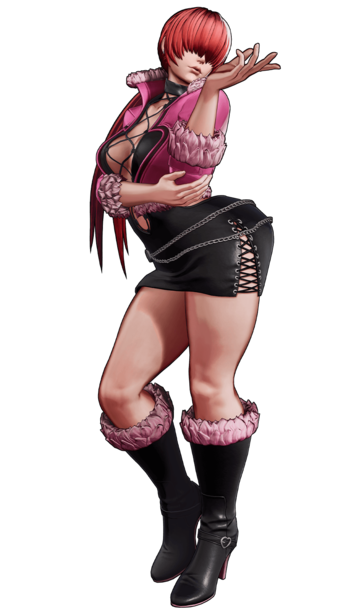 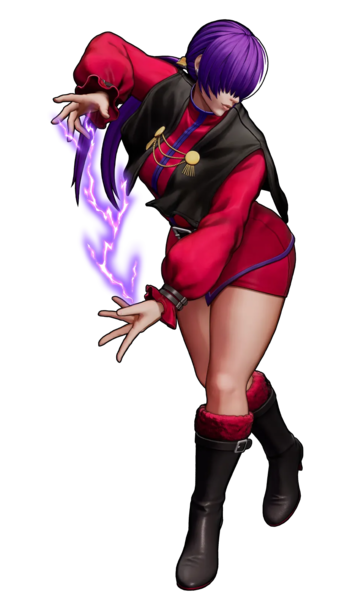 "Heh, don't hurt me, okay? ♪"
"My lightning will turn you to ash."
Origin: France

Fighting style: Grappling (Shermie), the power of Lightning granted by Orochi (Orochi Shermie)
Voiced by: note Hazuki Nishikawa (KOF '97-2002UM), Erina Seto (SNK Heroines-current)
Playable in: note '97, '98/UM, 2002/UM, XV
A fashion designer, and the keyboardist for C.Y.S. Like Yashiro and Chris, Shermie is another of the Four Heavenly Kings of Orochi, with power over lightning. She's normally laid back and somewhat ditzy, but when she reveals her true power she becomes very serious and devoted to Orochi's cause. After sacrificing her life in '97 to resurrect Orochi, Shermie is brought back in XV due to Verse's defeat in the prior tournament, and enters the latest one alongside Yashiro and Chris once again.
Chris 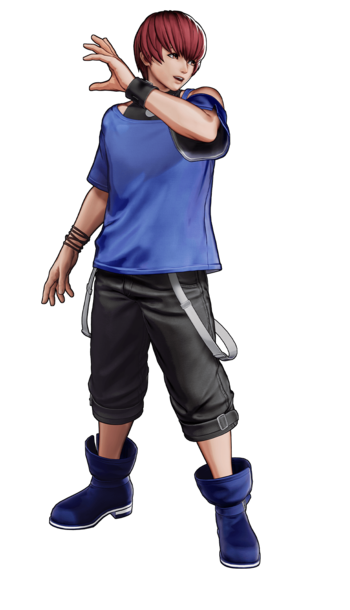 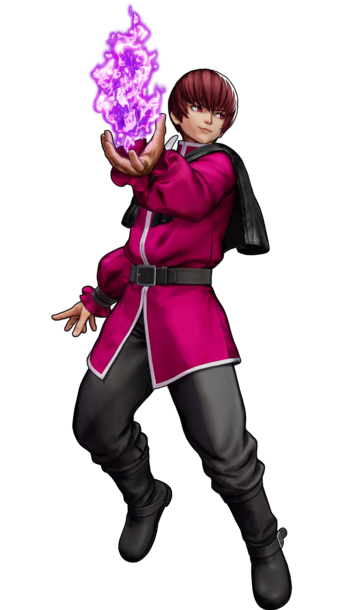 "Please go easy on me."
"I'll burn all you conceited fools."
Origin: Sweden 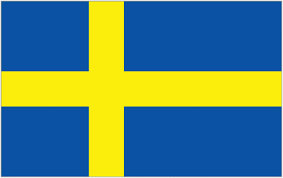 Fighting style: Speed attacks + acrobatics (Chris), the power of Fire granted by Orochi (Orochi Chris)
Voiced by: note Rio Ogata (KOF '97-2002UM), Shiki Aoki (KOF All-Star), Yuki Sakakibara (The King of Fighters for Girls), Rui Yamasaki (KOF XV)
Playable in: note '97, '98/UM, 2002/UM, XV
The speed-based member of the New Faces Team, vocalist and percussionist for the band C.Y.S., and Orochi's chosen vessel. A cute boy who knows it and takes advantage of it. As one of the Four Heavenly Kings of Orochi, he wields purple flames not too dissimilar from those of Iori Yagami. He is resurrected alongside his teammates due to Verse's defeat.
Advertisement: 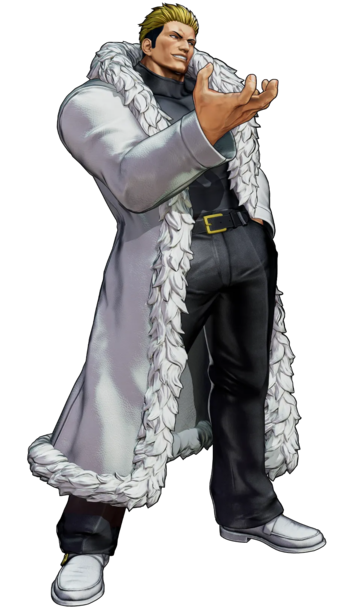 Wicked Heretic
"Hyahahaha! Your screams are music to my ears!"
Origin: Japan

Fighting style: Homicidal instinct
Voiced by: note Kouji Ishii ('97-2003), Tsuguo Mogami (XIV)
Playable in: note '97, '98/UM, 2002/UM, 2003, XIV (as DLC), XV (as DLC)
The Psycho for Hire when it comes to psychos for hire. Yamazaki has been in the crime business for as long as he can remember; he actually started as an orphan from Okinawa, who at an early age joined a local Yakuza cell and ultimately became the right hand of his idol, the high-ranked Yakuza boss Sorimachi, who considered him as a sort-of surrogate son and possible successor. One day, when he and Sorimachi were on their way to make a deal in Osaka, they were set up and ambushed, and Sorimachi was bloodily killed in front of him. This drove him completely insane, and he killed everyone who was there without a scratch. He became something of a criminal mercenary, broker and arms dealer, offering his services to the highest bidder no matter how dirty the job was: his biggest activities were took place in Hong Kong, where he clashed with the policeman Hon Fu. He was approached by the Jin brothers, who hired him to obtain the Jin Scrolls, but was defeated by Terry. He also kidnapped Franco Bash's son for some reason, but Franco rescued him eventually.
In the King of Fighters timeline, it's revealed that he is part of the Orochi bloodline, but he doesn't seem to care about that. In '97 he decides to bust up dojos for pleasure, and Billy Kane approaches him with a substantial offer of money courtesy of Geese. At first he doesn't feel like it, but after being infuriated by a surviving student and killing him, Yamazaki agrees. After the tournament he confronts Geese regarding his money and is paid. In 2003 he teams up with Billy yet again on the behest of Geese, along with Gato, but after a scuffle with Billy he has not been heard from since.

He makes his return as a DLC character for KOF XIV and as part of Team South Town in KOF XV.
See Fatal Fury 3 for tropes on him.
Blue Mary 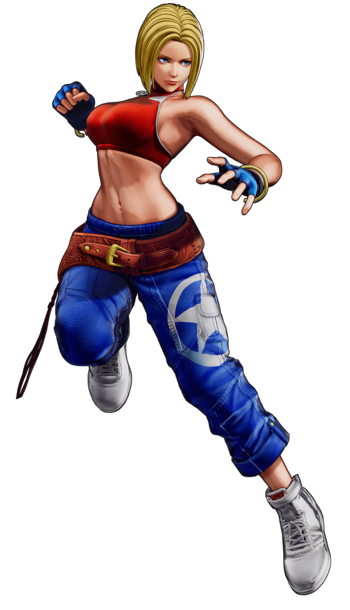 Joint Crusher
"This isn't about logic, it's about smashing your face in!"
Origin: USA

Fighting style: Sambo
Voiced by: note Harumi Ikoma ('97-XI), Sarah Emi Bridcutt (XIV-XV)
Playable in: note '97, '98/UM, '99, 2000, 2001, 2002/UM, 2003, XI, XIV (as DLC), XV, MI:RA
A freelance agent who was originally hired to investigate the theft of certain important scrolls. Her activities usually revolve around Geese's intentions; it's just as well, as her grandfather was Geese's mentor. In her KOF debut, she was hired to team with and investigate Geese's right-hand-man Billy Kane and Psycho for Hire Ryuji Yamazaki, only to find that Geese was behind her employment. Since then, she has served as a semi-regular team member, usually alongside other South Town representatives or female fighters. She gets along very well with Terry Bogard, though he wouldn't call her a girlfriend or pursue any relationship with her other than that of an "acquaintance" or "close friend."
After her last playable appearance in The King of Fighters 2002: Unlimited Match, Blue Mary made her return as DLC for The King of Fighters XIV. She's also a base roster fighter in XV, teaming up with her acquaintance Vanessa and a new teammate from XIV, Luong.
See Fatal Fury 3 for tropes on her. 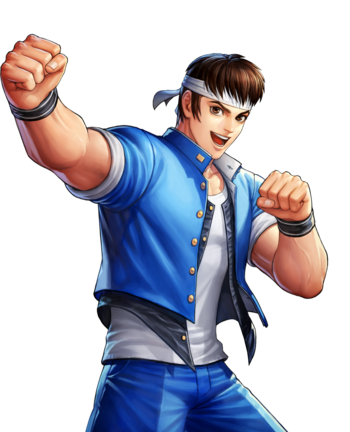 Fighting style: Kempo (based on Kyo's style)
Voiced by: Takehito Koyasu
Playable in: note '97, '98/UM, '99, 2000, 2001, 2002/UM, 2003, XI, XV (as DLC)
Kyo Kusanagi's biggest fan, and a junior in his old highschool. He enters the tournament to fight his idol, and in '99 goes looking for him with Benimaru, K', and Maxima. Afterwards, Saisyu takes him in as an apprentice. He re-enters the XI tournament to replace Chizuru, but though he sorta manages to keep Iori and Kyo from killing each other, he's beaten senseless by a reawakened Orochi Iori.
He's slated to return in KOF XV as a DLC fighter.
Orochi 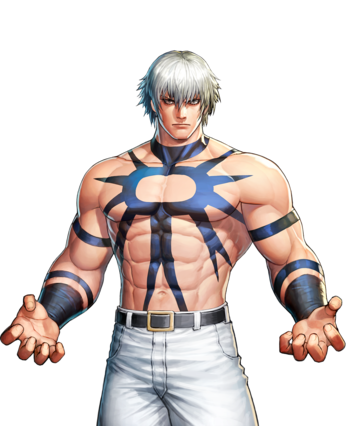 "The butterfly emerges from its chrysalis..."
Origin: Japan

Fighting style: Divine Orochi Power
Voiced by: note Rio Ogata (KOF 97), Motoko Kumai (CD dramas), Shiki Aoki (KOF All-Star), Rui Yamasaki (XV; cameo during Iori's Climax Super)
Playable in: note '98:UM
Boss character in: note '97, '98:UM
The infamous creature of legend. Orochi is the Genius Loci of the planet as a whole, although the biosphere itself is up for debate. Although it originally gave aid to humanity, its frustration with humanity’s capacity for ruin and cruelty ultimately led to it concluding that humans could never be more than pests, and needed to be treated as such. Therefore, it deployed its eight subordinate divinities, known as the Hakkeshu, to give it the chance to efface them. They were stopped 1800 years ago by the Kusanagi, Yasakani, and Yata clans, who sealed them away. However, Orochi was still able to use some of its power through the seal, and began to spread its influence to others. The first instance was corrupting Yasakani’s 1330s descendants into the Yagami, who proceeded to unseal the Hakkeshu. Through Goenitz in the present day, the seal was further weakened with the death of Maki Yata. The seal was fully broken in '97, when Yashiro Nanakase and Shermie offered their powers to reawaken him inside Chris. Orochi was nonetheless resealed by Kyo, Iori, and Chizuru after a fierce battle.

Alternative Title(s): The King Of Fighters The Orochi Saga 97