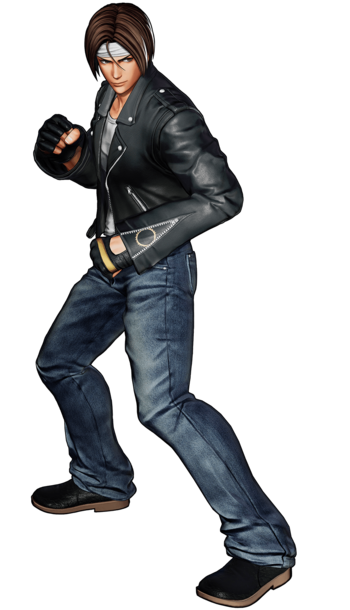 Profile
"Gotta bring the heat, y'know?"
The Protagonist of the series and one of SNK’s poster children.

Kyo begins as an Ordinary High-School Student who enters the first tournament both to prove his strength to the world (having already won the All-Japan Martial Arts Tournament) and to find his missing father Saisyu. After defeating Rugal for the first time, he encounters Iori Yagami who proclaims himself as Kyo's eternal enemy. Kyo makes it to the finals again and fights his Brainwashed father, and then Rugal once again. He learns of his destiny to seal away Orochi from Chizuru Kagura, and in '96, defeats Goenitz along with Iori. In '97 he, along with Iori and Chizuru, battle the last remaining forces of Orochi and reseal him, but he disappears afterward, and he is found by NESTS and cloned.

After having been missing for a year, he re-emerges and decides to invesitage NESTS, joining K' in combating the organization.

In the Tales of Ash saga, he joins with Iori and Chizuru once again to stop a group of people trying to resurrect Orochi, but Iori and Chizuru have their powers stolen by Ash Crimson, leaving Kyo as the final target. Due to Ash fully managing to unfurl his plan, however, Kyo never has his powers stolen.

In XIV, Kyo learns that a friend of Saisyu, Tung Fu Rue, is participating in the tournament with some new students. Kyo is asked to participate in order to 'show the ropes' to these newcomers.
Kyo: "So... uh... Are you sure that leaving the Muay Thai ring was such a good idea? You could've been an undefeated champ if you'd just kept fighting in the Muay Thai ring..."
Joe: "And you'd be undefeated if you just sat around protecting your ancient rituals. You're here for the same reason as I am. We both need to test ourselves against the best of the best!"
Kyo: "I hate to admit it, but you're probably right!"
Benimaru Nikaido - Japan 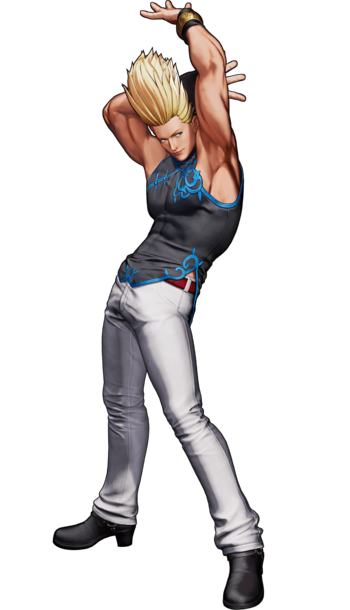 Profile
"My reason for winning? I'm just cool. Real cool."
Kyo's and Daimon's partner. A lightning user who's also quite the ladies' man. Practices an unconventional fighting style called "Shooting" (shoot boxing).
Despite being associated with the original Team Japan, Benimaru often finds himself teaming up with other fighters, teaming up with K`, Maxima and Shingo in '99, Shingo and Seth in 2000 and Elizabeth and Duo Lon in XI. As a result, he's also the fighter who has the most KOF wins. In XV, he finds himself with yet another team, this time with the new Hero Team alongside Shun'ei and Meitenkun.
Goro Daimon - Japan 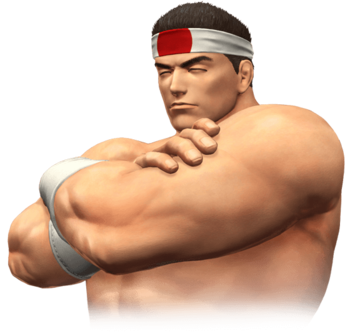 Profile
"Lightweight!"
Japanese judo master who was invited by Benimaru to join the Japan team for the '94 tournament. He, Kyo, and Benimaru have been good friends since then, although Daimon occasionally declines joining tournaments to focus on his family.
Advertisement: 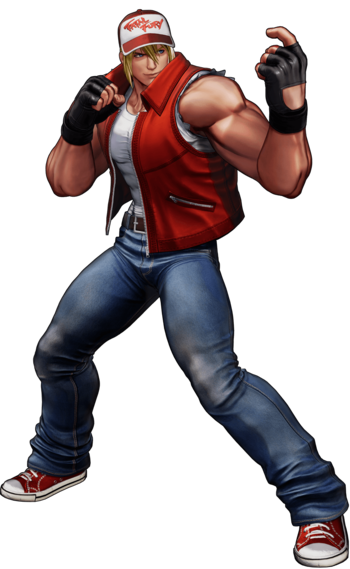 Profile
"Say what? It's no fluke. This is why I'm here every year."
The hero of the Fatal Fury series and one of SNK’s poster children. His role in the overall plot of the KOF series is minimal, as he's mostly here due to his popularity. He was raised by martial arts master Jeff Bogard along with his younger brother Andy, and developed his own unique fighting style based on Jeff's teachings. He witnessed the murder of his father at the hands of Geese Howard, and trained with Tung Fu Rue to take revenge. Terry defeated Geese and gave him a boot out of his tower, but after learning of his survival Terry was none too pleased. He failed in stopping Geese from obtaining the Jin Scrolls but in the next tournament, he defeats Geese once again and this time tries to save him from falling off the tower, again, but Geese rejects him, allowing himself to plummet to his "death," again. He adopts Geese's son Rock afterward, and trains him.
In the KOF continuity, however, Geese did not die. Terry has been a constant participant throughout all KOF tournament, giving all the good fights. In XIV, however, Geese's return to the tournament raised his suspicion and he decided to enter with Andy and Joe to investigate and stop whatever Geese plans.

See Fatal Fury - Terry Bogard for tropes on him. 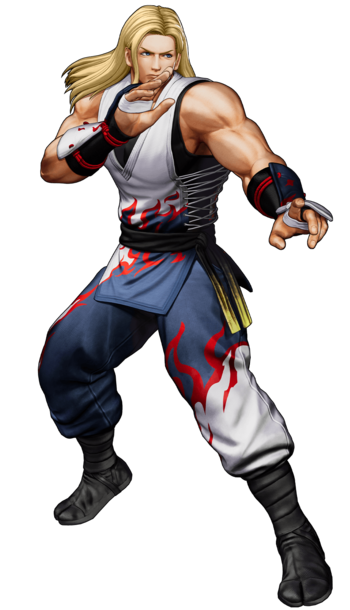 "If you want to be the best, it's practice every day, pal."
Profile
Younger brother of Terry and a McNinja. He was taught a basic form of Shiranui ninjutsu by Mai's grandfather Hanzo. After hearing of his father Jeff's death at the hands of Geese Howard, he joins forces with Terry and Joe Higashi, and the three enter Geese's King of Fighters tournament. Although Andy fights Geese first, he loses badly, and Terry finishes the villain off... maybe. He's also the apple of Mai's eye, although he rejects her advances.

See Fatal Fury: King of Fighters for tropes on him 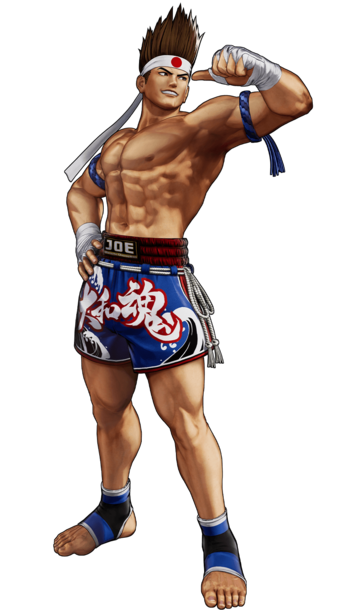 Profile
"How's that? I'm the Satan of martial arts."
A Japanese man who is well versed in the art of Muay Thai, he is the best friend of both Bogard brothers, and is a constant in nearly every King of Fighters tournament. He is currently dating Billy Kane's sister Lilly, something her overprotective older brother Billy is not happy about, given his connection to the Bogards (that's for the Fatal Fury continuity; in The King of Fighters he possibly remains single, later being chased around by his unnamed loyal fan). Quite possibly the strongest Muay Thai practitioner in the SNK 'verse, much to credit for his many team ending sequences consisting of him winning other fighting tournaments by himself.

See Fatal Fury: King of Fighters for tropes on him 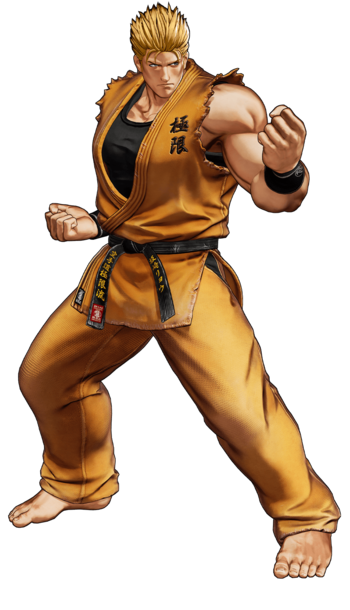 Profile
"Absolute karate, that's Kyokugen. And don't you forget it, dweebenheimer!"
The heir of the Kyokugen School of Karate and the main protagonist of the Art of Fighting series. Ryo is Takuma's son and Yuri's brother and best friend of Robert Garcia. He rescued Yuri with Robert, who was kidnapped by Mr. Big and Geese Howard to get Takuma to do their bidding, thus freeing his father from said bidding as well. Now he promotes the fighting style by competing in tournaments. He later takes up his father's title of "Mr. Karate."
In XIV, he and his teammates heard rumors about a fake Kyokugenryu school. To clear the legitimacy of the Kyokugenryu school, Ryo entered the King of Fighters tournament.
See Art Of Fighting I for tropes on him
Robert Garcia - Italy 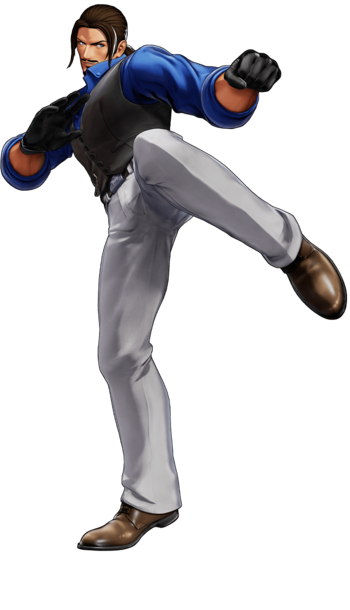 Profile
"Underestimate my strength, huh? You're dumber than you look!"
Italian playboy who is also the heir to the Garcia Foundation, one of the largest companies in the world. He was sent to train with the Sakazakis by his father, who wanted him to appreciate the value of hard work. He became good friends with Ryo and when Yuri was kidnapped by Mr. Big, he and Ryo hit the streets of Southtown to get her back. While Ryo's style of Kyokugen is more balanced, Robert's focuses mostly on kicks. He and Yuri have a relationship, but they have yet to make any serious commitment.
See Art Of Fighting I for tropes on him
Takuma Sakazaki/Mr. Karate - Japan 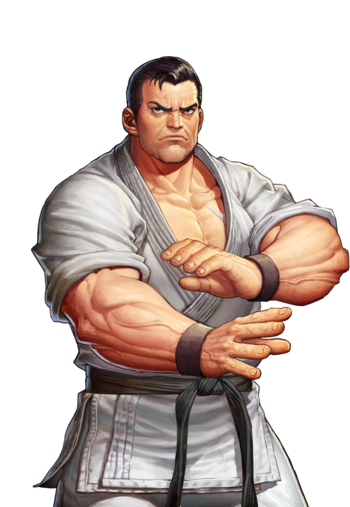 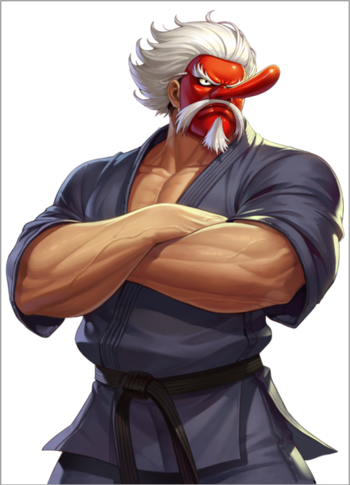 to see him as Mr. Karate.

Profile
"Wow, you're a disgrace! You'd better hang it up, kid."
The current master of the Kyokugen Karate style. He is sometimes seen as a doddering old man, but he can be very serious when he wants to be. He was forced into serving Mr. Big when his daughter Yuri was kidnapped. To conceal his identity, he wore a tengu mask and dubbed himself "Mr. Karate." After he was defeated by a very pissed off Ryo, he was almost killed by him until Yuri revealed the truth. Nowadays he enters tournaments to promote his school. He sometimes likes to put the old mask back on just for kicks and giggles.
See Art Of Fighting I for tropes on him

Alternative Title(s): The King Of Fighters The Rugal Saga 01