Characters / The Joy of Creation: Reborn

A list of characters and animatronics who appear in The Joy of Creation: Reborn. Be wary of unmarked spoilers below.

The unfortunate owner of the house haunted by the animatronics, husband of Val, and father of Nick, Anthony, and Sam. And yes, he's the Scott Cawthon, creator of the Five Nights at Freddy's series.

Scott's son who, as a toddler, experiences the home invasion of the animatronics. Years later, he moves back to his childhood home.

A stranger whom Scott and his family find sleeping inside their house after hours. After some reservation, the family decide to allow him for a sleepover, but it becomes apparent that he's not alone...

For more information about the animatronic he really is, see the "Creation" folder below.

The landlord who owns the land where Scott's burned house remains after its destruction, he helps Nick with its reconstruction.

Endless Mode Player
Just an unfortunate everyman coming home to his house one night to find it haunted by the lost memories of Freddy Fazbear's Pizza.

Yet another unfortunate everyman trapped in Fazbear's Fright, told by a voice to blow the place sky-high to free its vengeful spirits.

Man on the phone
Voiced by: Ry-Guy

A mysterious voice that calls the player in the Halloween Update and explains the objective to them.

In General
Formerly Freddy Fazbear Pizza animatronics caught in a fire and for some reason spiritually bound to the player's house to patrol and haunt it like Survival Horror monsters.
Ignited Freddy 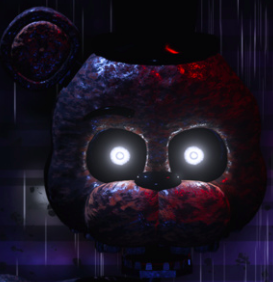 Only you can prevent forest fires.

You had one job to do!
A Freddy Model caught in a fire and spiritually bound to the protagonist's house.

He's the enemy in the First Floor level, where he functions like a generic Survival Horror enemy, casually and slowly patrolling the area and giving the player a short but heart-racing chase upon spotting them, and if they're caught?
Ignited Bonnie 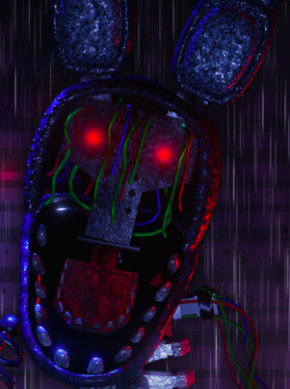 Not even your spear and magic helmet will save you now...

A Bonnie Model caught in a fire and spiritually bound to the protagonist's house.

He's the enemy in the Basement level. He's very similar to Freddy in terms of gameplay, but is MUCH more persistent, has MUCH better hearing, and is MUCH MUCH more speedy.
Ignited Foxy 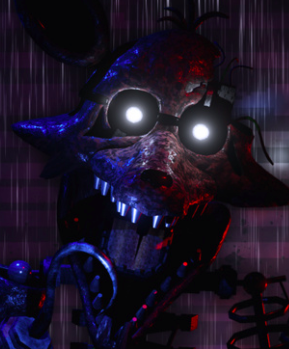 Are you enjoying your ride, Mr. Gant?
A Foxy Model caught in a fire and spiritually bound to the protagonist's house.

He is the enemy in the Attic level. He has a very unique gameplay style where he's originally docile, simply passively following the player around, but will occasionally lash out at the player with his Super Speed. The only way to stop him is to shine your light in his eyes, resetting his systems and returning him to his docile mode.
Ignited Chica 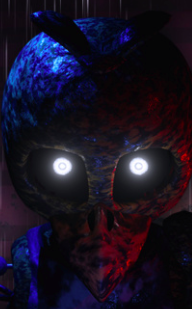 Is that gasoline I smell?
A Chica Model caught in a fire and spiritually bound to the protagonist's house.

She's the enemy in the Forest level. She's similar to Foxy in that she passively follows the player around at a slow speed, and will occasionally lash out in an attack mode that can be stopped beforehand by just glancing at her.
Ignited Springtrap 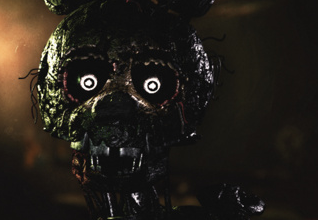 Burn it to the ground.
A Spring-Bonnie model caught in a fire and presumably possessed by the Purple Guy, making Ignited Springtrap. He haunts Fazbear's Fright as he does in Five Nights at Freddy's 3.
Ignited Golden Freddy 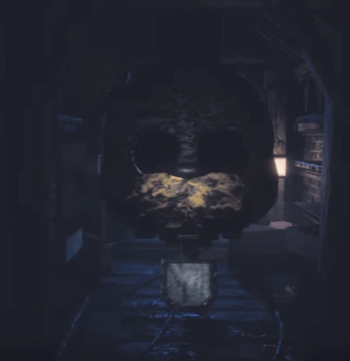 Look. I'm burning.
A Golden Freddy model caught in a fire and spiritually bound to the protagonist's home.

The "Fallen"
A group of endoskeletons that lurk in the shadows of the house. Each corresponds to the four main animatronics. Their names, as revealed in the Extras, are Endo B "Angel" (counterpart to Freddy), Endo R "Blue" (Bonnie), Endo C "Mouth" (Chica), and Endo F "Red" (Foxy).
Creation
Voiced by: Ry-Guy 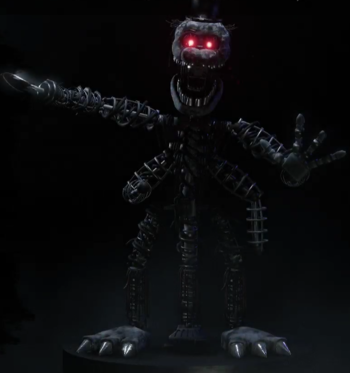 Now, let's all agree to never be creative again.
The force behind the Ignited Animatronics haunting the Cawthon family in Story Mode, who took the guise of Michael Schmidt to enter the household. It serves as the Final Boss of sorts, attacking you during the final level (the Attic) in Story Mode.