The non-idol staff of the unnamed production agency in the Mobile Game and 346 Production in the Anime. They're the people who actually oversee the careers of the Idols featured in Cinderella Girls.

Go here for the main character index of THE iDOLM@STER: Cinderella Girls.

Debuted in the Mobile Game

The Producer
An up and coming producer of an unnamed production company controlled by the players in both Cinderella Girls mobage and Starlight Stage, as well as in Drama CD skits. As an avatar of the player he is voiceless, faceless, and nameless: known only as "Producer" to everyone. The Yonkoma version is a sociable individual who tries his best to maintain a professional relationship with the idols. For all incarnations, he has a sharp eye for scouting unpolished musical talent, and unwavering dedication to ensuring those under his wing achieve success.
Chihiro Senkawa 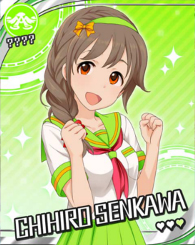 Secretary to the Producer of Cinderella Girls, and serves as the game's tutorial guide and information woman. She's essentially an Expy of Kotori Otonashi, and does not have an active idol career or in-game card.note The one presented to the right was an April Fool's Day event and unobtainable.

While categorized under Passion Type, the Trainer sisters are collectively a fourth color set: the green cards. They are not actually idols, but trainers who teach them dance routines and staying in physical shape. Trainers have ridiculously low attack and defense stats, making them useless in card battles, but increase reward experience for the idols they accompany. Fans have noted that all four siblings, despite the different height and measurements, claim the same weight. This leads to the ironic idea they are lying about it. 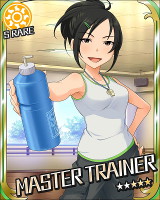 Eldest of the Trainers. 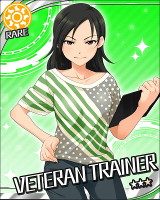 Second eldest of the Trainers. 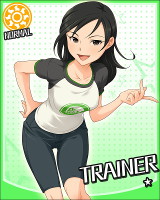 Second youngest of the Trainers. 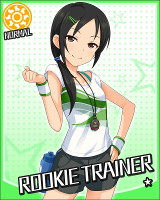 Youngest of the Trainers.

Only Present in Audio Dramas

Featured in the idols' Drama CD interviews (Titled "Mezase! Cinderella No.1") and Magic Hour specials, Staff-san is the radio show co-host who indicates approval or displeasure at the idol's comments with a sound-emitting speaker. The more eccentric idols tend to get the "negative buzz" a lot, causing hilarious reactions. In general, the idols have a strictly professional relationship with Staff-san, making him a non-romantic male character for them to interact with.

Debuted in the Anime 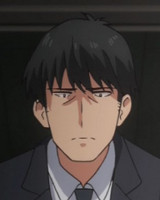 The Producer as conceptualized for the anime, here he is a man in his mid-twenties who is put in charge of the Cinderella Project. He is noted for his perpetually serious demeanor and somewhat intimidating appearance.

As intimated by the aftermath of the New Generations unit debut episode, he wasn't always like this. When he started out, he was far more enthusiastic in publicizing the idols under his wing, but a string of disappointments (symbolized by the three Cinderella silhouettes running away from him) turned him into the man he is today — still supportive, but keeping remote and unemotionally involved as possible.

The director of the Cinderella Project, and the Producer's direct superior.
Mishiro 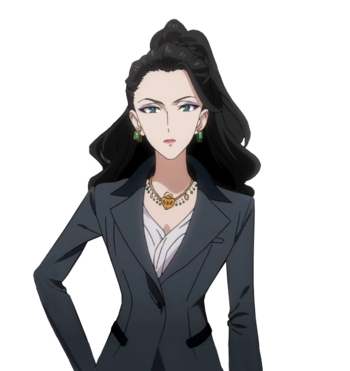 The executive director of 346 Pro's idol division, introduced in the second half of the anime. She is a no-nonsense woman with a strong attention to detail and daughter of the corporation's President. Though an antagonist to the Producer and many idols, she's not a Corrupt Corporate Executive or straightforward Bad Boss. Mishiro believes the current way of things are wastefully inefficient and too time consuming. She wants to focus on established methods that guarantee success; not experimental projects that might succeed. However, her authoritative personality and anti-creativity mentality go against what 346 Pro had been successfully doing before she arrived.