Characters originating from the foundation and 2nd Vision titles. This includes, but not limited to: The iDOLM@STER, The iDOLM@STER 2, THE iDOLM@STER: Dearly Stars, and anime/Drama CD/manga based directly off these properties. They are collectively considered the core cast of iM@S.

General Tropes
The focus of much of the story of both the games and the 2011 anime adaptation.

Everything between parentheses on their profiles means that they changed and/or were added by "THE iDOLM@STER 2". 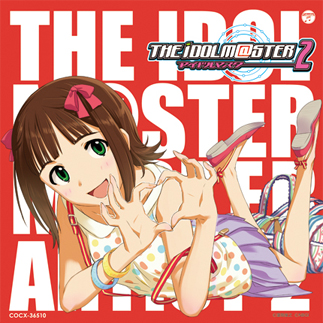 Haruka is the main character; a cheerful, hard-working 16-year-old. A simple love of music and entertaining together with others drove her to become an idol. Her special talents are that she has none. 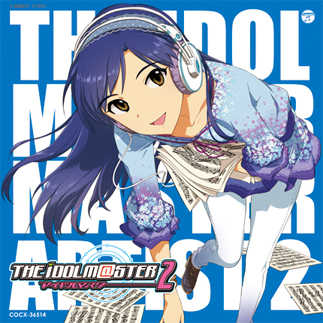 A talented and serious 15-year-old who became an idol in order to improve her singing. She isn't really thrilled by the flashier aspects of her career, and is rather fond of classical music. 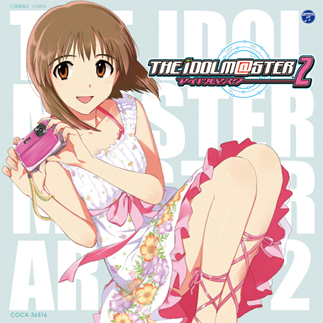 A painfully shy 16-year-old from a traditional household who's prone to frequently bursting out in tears. She became an idol hoping to shed her fragile persona. 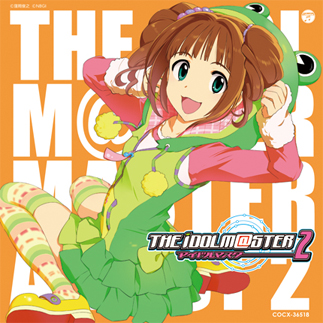 An "ALWAYS 200% GENKI!!" 13-year-old from a poor family and the eldest of six children. Making a living for her family was part of the reason she joined 765. 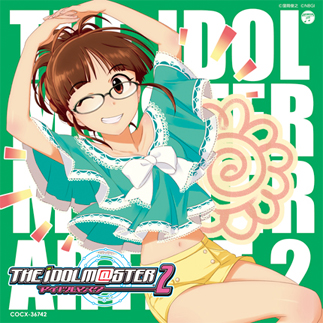 A focused, industrious 18-year-old who originally joined 765 as an intern, but became an idol due to shortage of talents. Even as an idol she still handles the business side of her career.

In iM@S2, she officially retires from performing and becomes the producer of Ryuuguu Komachi. 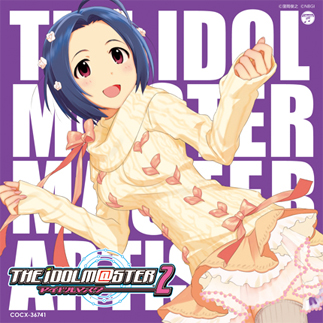 The oldest of the idols at age 20, Azusa is an easygoing, hopeless romantic. She became an idol hoping to gain more attention and ultimately find her "destined one." 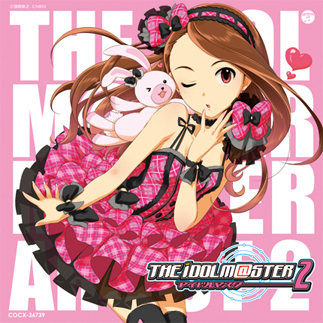 The rich, spoiled 14-year-old daughter of a corporation CEO acquainted with 765 Production's president. She is sickeningly sweet towards complete strangers, but incredibly sharp-tongued to everyone else (i.e., the staff, her fellow idols, and even the Producer). She became an idol to prove to her father that she could become successful on her own terms.

In iM@S2, she is the leader of Ryuuguu Komachi, and is quite enjoying her new taste of stardom. 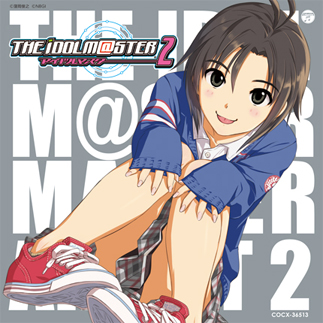 16-year-old Makoto was raised as a boy by her father, who always wanted a son. As such, she uses masculine pronouns and is good at sports and karate, and gets more attention from girls than boys. Ultimately she came to resent it, wishing she could be more feminine and get more attention from boys, so she became an idol to try to reinvent herself. 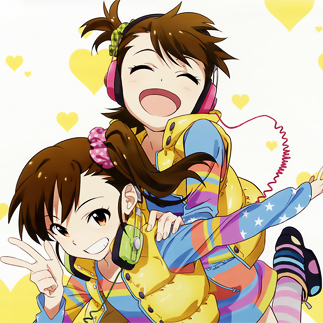 A pair of hyperactive 12-year-old twins, and the youngest of the bunch, who became idols because it sounded fun. They take turns performing under Ami's name.

In iM@S2, Ami is a member of Ryuuguu Komachi while Mami is produced separately. 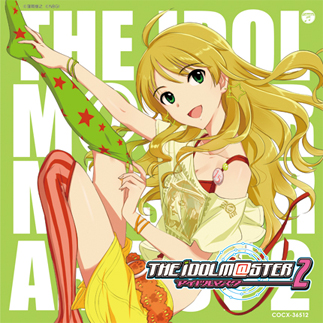 Laid-back 14-year-old Miki thinks she can breeze through the idol ladder, given that she already gets good grades without much effort, gets 20 love confessions a day, and manages to stay in shape in spite of sleeping a lot. She debuted in the first game's Xbox 360 version, and is the only character to have an alternate story route. 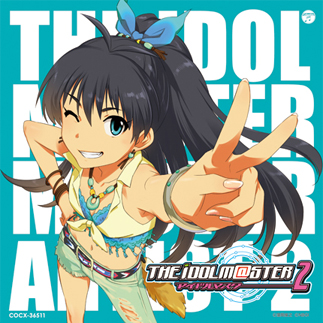 An energetic 15-year-old from Okinawa who loves to dance and sing. She became an idol to make people happy, and has a ridiculous number of pets ranging from the mundane to the bizarrely exotic. Hibiki was introduced in the iM@S SP as a member of Project Fairy, 961's production. In iM@S2, she is a part of 765 Production. 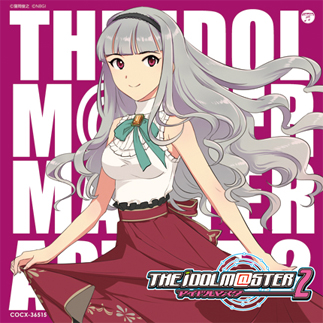 An elegant and majestic 17-year-old from an unstated, far-off land, Takane was first introduced as a member of Project Fairy in iM@S SP. Her distance can be mistaken for haughtiness, but she's very polite to everyone, even her rivals. In iM@S2, she is a part of 765 Production. 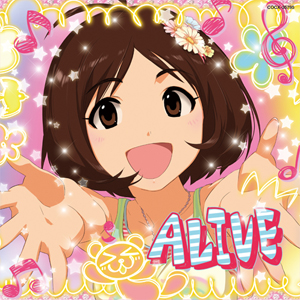 13-year-old daughter of Mai, herself a once hugely popular idol. Growing up on tales of her mother's glory, little wonder she ended up wanting to become an idol herself. Unfortunately, she fails every audition she tries, until a chance meeting with Haruka, who felt she has potential and introduces her to 876. 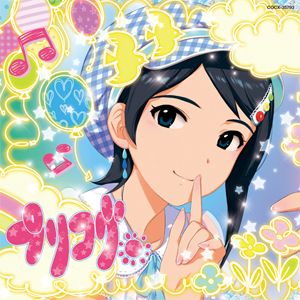 15-year-old Eri was a hikikomori and an internet celebrity known as "ELLIE". One day, however, she is scouted by a producer from 876 to become a real idol, a prospect Eri is naturally very nervous about. 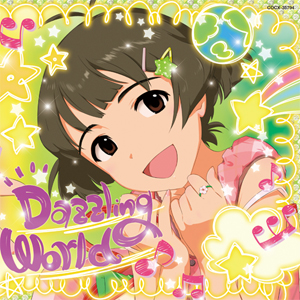 A soft spoken 15-year-old boy and Ritsuko's cousin. Fed up with his lack of luck with girls and unwanted luck with boys, he asked Ritsuko for help in turning him into the kind of cool, handsome idol that women would love. She introduced him to 876, where he is promptly put into a frilly pink dress and pushed onstage in a desperate attempt to save a show after the actual performer is a no-show.

For his tropes as a member of 315 Production, see here.

Voiced by: Ryouka Yuzuki (InnocentBlue Drama CD)
Ai's mother, an idol like her, currently retired. By the time the story stars however, she wants to find a way back into the spotlight.
Yumeko Sakurai

Ryo's fellow idol and rival in his storyline. Though she maintains an image of being cute and innocent, she uses incredibly dirty tactics to claw her way to the top, such as giving out candies that clog the vocal cords of her rivals, or sabotaging the stage so the other contestants screw up.

Project Fairy
A trio of girls who serve as 765's primary rivals in the 1ST VISION titles. This group consisted of Takane Shijou, Hibiki Ganaha, and Miki Hoshii. The group in no capacity exists in the 2ND VISION and onward titles, but the formation is referenced every once in a while. 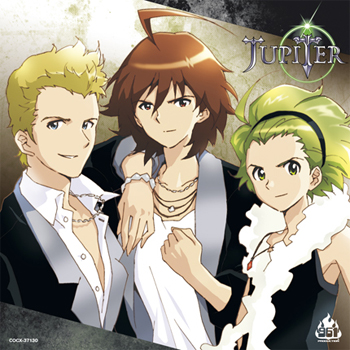 From left to right: Hokuto, Touma, Shouta
Click here to see their initial appearances in Side M 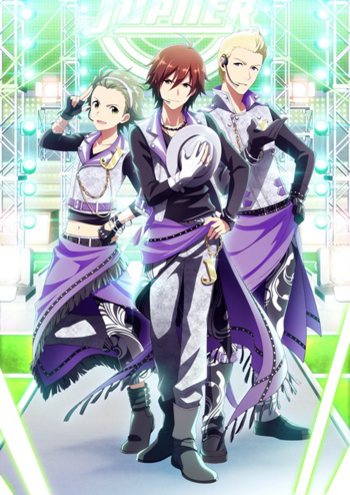 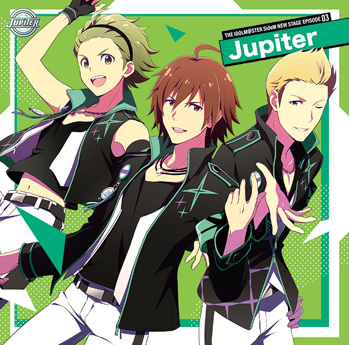 The all-male idol group formed by 961 Production in iM@S2, acting as The Rival to 765. In SideM, they've struck their own path as 315 Production idols and mellowed out considerably.

For their tropes as members of 315 Production, see here.

17-year-old leader of Project Jupiter. A self-centered idol who takes idol work very seriously and dislikes people who are just in for the fun of it.

An "eternally dangerous idol prince", 20-year-old Hokuto is another idol for Project Jupiter, and his hobbies include piano, violin and going on dates.

An aptly named 14-year-old idol who takes a relaxed approach to his career.

One For All Rivals

A Festa opponent introduced in One For All, hyped as the strongest rival yet.

A new idol under 961 Pro introduced in Stella Stage.

A new idol under 961 Pro introduced in Starlit Season.

The rookie producer of 765 controlled by the player. As an avatar of the player, he is voiceless, faceless, and nameless, known only as "Producer" to everyone. In the anime, he's still nameless, but is revealed to be a young man not much older than Azusa, with mild manners and a nondescript face. Dedicated, if occasionally overwhelmed, he works hard to get the idols under his care to stardom. He is much less hands-on than Ritsuko, acting more as a guiding and supportive figure than a boss. 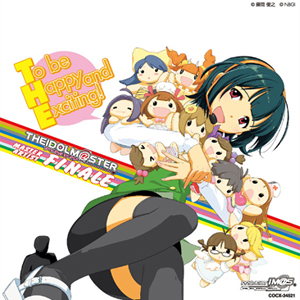 Secretary of 765 Production, who serves as the game's announcer and tutorial guide. Famous for daydreaming on the job — sometimes in the middle of conversations.

In the anime, it was revealed that she was an ex-idol under the tutelage of Takagi and Kuroi before their falling-out.

New president of 765 Production after his cousin Junichiro stepped down. In the anime, his body can now be seen in full, but his face is still obscured. Like Junichiro, he is referred to by everyone as "President".

The president of 961 Production, first introduced in Idolm@ster SP.

The president of 876 Production. An old friend with Junichiro.

The manager of 876 Production and producer of both Ai and Ryou. She's the one responsible for making Ryo debut as a female idol. Unlike other characters, she never got a voice actress either in the game or any Drama CD.

A freelance producer who brings Eri to the idol industry.

Reporter Yoshizawa
Voiced by: Mitsuaki Hoshino (anime continuity)
A reporter that shows up in the A-1 anime continuity, interviewing various groups throughout the franchise.
Kotomi Otonashi
Kotori's mother, who was once an idol herself like her daughter.