Characters / The Heroic Legend of Arslan 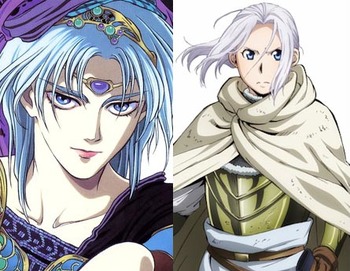 The prince of Pars, but is frequently misinterpreted by those around him as being a weakling, because of his effeminate appearance, naivete, compassion, and optimism. While these are true to a point, Arslan is also philosophical, intelligent, and charismatic, able to rally even the most apathetic of people to his cause. He is dedicated to his friends, especially Daryun, at one time threatening to kill an ally who had got Daryun into a particularly nasty situation. 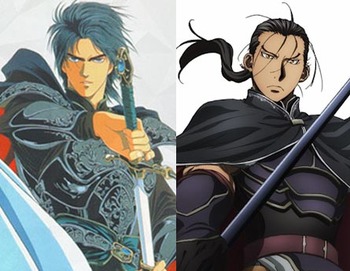 Formerly a high-ranking military officer of the kingdom of Pars, Daryun is demoted from his position in the opening of the anime. His new mission is to personally protect and serve Arslan, which inevitably lead Daryun and Arslan to become close friends. Daryun is loyal to a fault, and at points tells Arslan that whatever his true origins may be, Daryun regards him as his prince. His fighting skills are so legendary that, at one point, Prince Rajendra praises him as the greatest warrior in both Pars and Shindra. 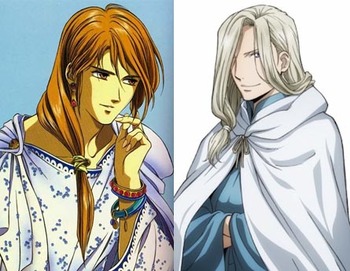 Narsus was once a chief adviser and tactician under Andragoras, but because he spoke out against the king's continued practice of slavery, he was removed from his office. In addition to being a brilliant tactician, Narsus is also an incredible swordsman, an intelligent philosopher, and a not-so-skilled painter. Arslan convinces Narsus to help in his cause by promising to make him the court painter. 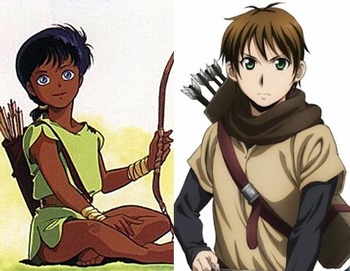 A youth whom Narsus brought out of slavery, Elam intends to serve his "master" Narsus until he is old enough to live on his own. Cunning in his own way, he acts as a spy to gather useful information through various disguises. He faces something of a struggle with Alfarid for the affection of his master Narsus. 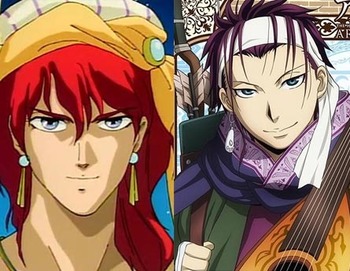 A traveling musician and womanizer, Gieve also happens to be a skilled bowman and swordsman. He initially joins Arslan's party out of his infatuation with Farangis, but later shows true sympathy for the young prince and is curious to see what kind of kingdom Arslan will make. 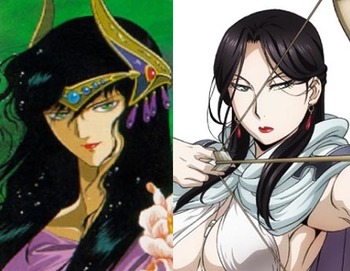 Farangis is an aloof and cool priestess sent to assist Arslan on behalf of the Temple of Mithra. She is an extremely skilled marksman with a bow and is also able to hold her own with a sword. 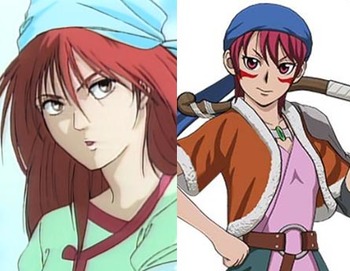 The daughter of the chief of the Zott Clan, Alfarid is a bandit who was saved by Narsus from Silver Mask when the latter killed all her companions including her father. 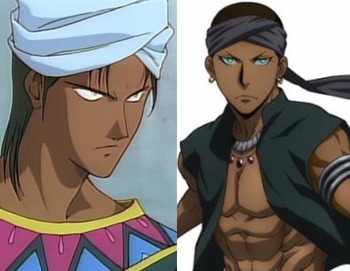 A Shindran soldier sent by Prince Gadevi to infiltrate Rajendra's army. He ends up as Arslan's guide and when he's discovered, Arslan spares him since he empathizes with his situation: he's an orphan raised by Grand Vizier Mahendra, who was like a father to him. He eventually joins Arslan's main group, but refusing to pledge his allegiance to the kingdom Pars. Instead, he personally swears loyalty to Arslan to repay the prince's mercy. 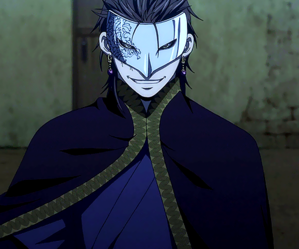 Leader of the Lusitanian army and the main antagonist.

One of Andragoras' loyal retainers. He sets a trap for the Pars army that leads to the kingdom's downfall and now serves Lusitania.

One of Pars' Marzban, who nearly got killed during the takeover of Ecbatana. He sworn his loyalty to Silvermask upon knowing of his true identity.

Kharlan's son, who serves Silvermask in hopes to achieve his vengeance against Arslan and Daryun.

King of Pars, Arslan's father. Known for his stubbornness and preference of power over strategy, Kharlan's betrayal and Silvermask knowledge of Parsian tactics led to his and his army's disastrous defeat. He is kept alive as a prisoner after his kingdom's fall.

Queen of Pars, Arslan's mother, with a cold attitude towards him. It is said that her striking beauty was the reason for several nobles to betray and kill each other for her hand.

The Eran of Pars and King Andragoras' right-hand man. Whenever he is not on the battlefield, he serves as Arslan's swordsmanship instructor. After the battle of Atropatene proves to be a death trap, he convinces Andragoras to retreat to Ecbatana, but they are ambushed by Silvermask and Vahriz is killed in the ensuing fight.

One of Andragoras' loyal retainers. He was captured during the battle of Atropatene and presented at the gates of Ecbatana. He's put out of his suffering by Gieve.

One of Pars' Marzban known as the Twin-Blade General and the trainer of the hawks Azrael and Sirrush, that are very fond of Arslan.

One of Pars' Marzban. Known for being a heavy drinker as well as a ladies's man.

One of Pars' Marzban and is the oldest of the Marzban at age 62.

Son of the Lord Mundhir of Oxus, who joins Arslan's cause before the battle of Saint Emmanuel's Keep. He's impatient and hot-headed, and takes a mutual dislike for Jaswant.

Shapur's younger half-brother, who joins Arslan's cause before the battle of Saint Emmanuel's Keep. Isfan takes an immediate disliking for Gieve for his Mercy Kill of Shapur.

Garrison Commander of Zara, who joins Arslan's cause before the battle of Saint Emmanuel's Keep. Unlike Isfan and Zaravant, he's keeps a level head.

The current King of Lusitania and ruler of occupied Myriam and Pars, and the elder brother of Guiscard.

The Supreme Commander of the Royal Lusitanian Army and Grand Vizier. He is the brother of the current king of Lusitania, Innocentius VII and serves as his advisor.

The Grand Inquisitor and archpriest of Lusitania, and a servant of Lusitania's God: Yaldaboth. He enjoys torturing and killing those he considers "pagan" and is disliked by Guiscard for his extremism.

A child from Lusitania that was taken captive after the first war between Pars and Lusitania, but managed to escape by using Arslan as a hostage. Three years later, Etoile serves as a squire to a Lusitanian count. Etoile is the one who sheds light to Arslan that the ways of Pars are not right and holds a firm Yaldaboathian belief that all men are equal. Initially believed to be a boy, it is later revealed that Etoile is a girl who cross-dresses as a boy so she can fight in the army.

He is a Lusitanian Count and officers and the Commander of the Fortress of Saint Emmanuel. Back in Lusitania, he was the Chief Royal Librarian.

The blind Princess of Maryam of Lusitanian territory. She befriends and falls in love with Hilmes back when he was betrayed and left for death by Andragoras in his youth, and meets him again in the present while attempting to escape Lusitania's clutches.

Second prince of Shindra, who leads an invasion of eastern Pars hoping to take advantage of the political situation. After his invasion is frustrated and he's captured, Arslan forces him to make an alliance with him, offering his help to ascend to the throne over his half-brother Gadevi in exchange for his assistance against Lusitania.

First Prince of Shindra and Rajendra's older half-brother. Against his father's wishes, Gadhevi seeks to secure the throne for himself while trying to get Rajendra killed whenever he can.

Hereditary Grand Vizier of the Kingdom of Sindhura and an ally of Prince Gadhevi, he's also Jaswant's adoptive father.

Daughter of Mahendra and the future wife of Prince Gadhevi. 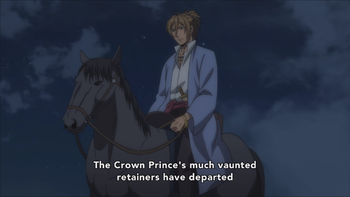 You really are too soft, your highness. When I get free I will come for revenge!
Head merchant of the city and (former) friend of Narsus.
Viceroy Pelagius 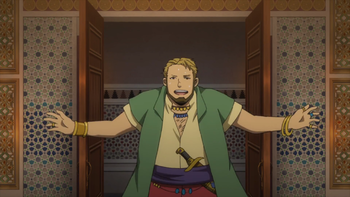 Your highness, I'd love to help the war effort, really, I would, but this city is targeted by pirates, and they set upon us the instant they see an opening, almost like magic!
The regional governor in charge of Gilan.
Captain Graze 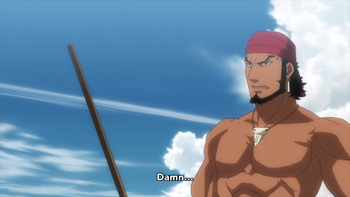 Get me another spear!
A sailor whose trade ship is attacked by pirates while Arslan's crew is in a meeting with Viceroy Pelagius. He happily joins Arslan's cause in gratitude for Daryun coming to his rescue.

The Zahhāk Warlocks are a cult of sorcerers with ancient connections to the Pars Kingdom. Not much is known of the Mages except that they aid Hilmes in his quest of retaking the Kingdom of Pars. Their ultimate goal is the resurrection of the Snake King Zahhak.

The older son of the chief of the Zott Clan and brother to Alfarid. He is looking for his sister after the death of their father. He is currently with Irina, helping her to find Hilmes.

He is a Turanian general, part of the invading force against Peshwar. Due to a perceived betrayal, Jimsa was forced out of the Turan forces and almost killed, but was found by Arslan's group.