This page covers a few of the characters from the various incarnations of the ride.

open/close all folders
The Ghost Host 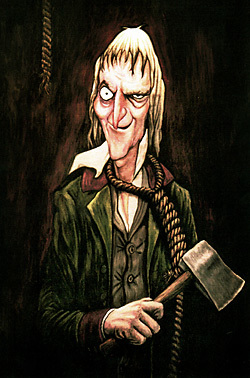 The Host and The Narrator of the rides, the Ghost Host is the unseen voice that accompanies guests around the mansion. He was Driven to Suicide by hanging from the rafters in the mansion's cupola. The Ghost Host uses Black Comedy to entertain and possibly intimidate the guests, scaring them several times, and often invites them to join the mansion's residents as resident number one-thousand. He is not called Master Gracey in the "current" canon, although that's a little complicated here.

At first, the name Master Gracey (readable on a tombstone in the graveyard) and the Ghost Host character weren't related. But the fans started to theorize about that, and some merchandise and a poster displayed in the official parks were signed "Master Gracey, your Ghost Host". In the movie, Gracey is indeed the master of the house (something he was never intended to be at first), but is not the Ghost Host. In the comics, they're the same character. Today, this connection is no longer used in official merchandise, but a lot of fanfics continue to use it. 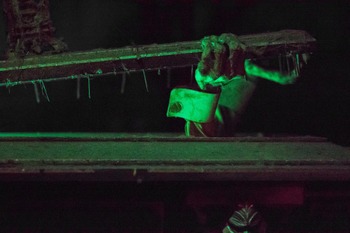 "All our ghosts have been...dying to meet you. This one can hardly contain himself."
Voice Actor: Xavier Atencio

A body in a coffin, struggling to pry off the nailed-down lid. Official sources describe the scene as a "premature funeral", but it's unclear if he's alive or undead, or a ghost trapped in his mortal body. In the original Haunted Mansion, he's in the plant conservatory, while he appears in a different coffin in Phantom Canyon in the Paris attraction. 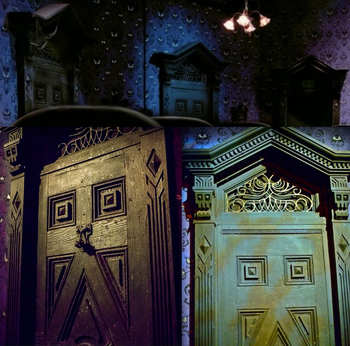 "...unfortunately, they all seem to have trouble getting through."

A hallway of restless spirits either trapped behind or in the doors. After the Coffin Man, they show that the ghosts in the house need Leota's help to be freed. 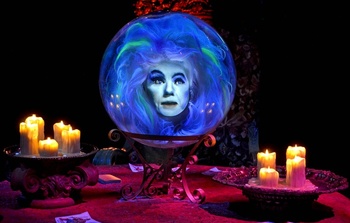 The spirit of a psychic medium, whose head appears inside a crystal ball. From her chamber, she performs a Spooky Séance to contact the spirits from beyond. She has a tombstone outside the ride which has moving eyes.

Beating Heart a.k.a. "The Bride" or "Emily" or "Elizabeth"

The Bride was one of the most iconic figures of the attraction. She went through many designs, most of which (except the first one) depict her as a forlorn, waiting figure. They all share one trait: a red, glowing, beating heart, whose sound fills the Attic of the Mansion, which she haunts. While the bride character was redone with Constance Hatchaway replacing her in the American Mansions and Melanie Ravenswood being used in Phantom Manor, Beating Heart is still in place at the Tokyo Disneyland Mansion. 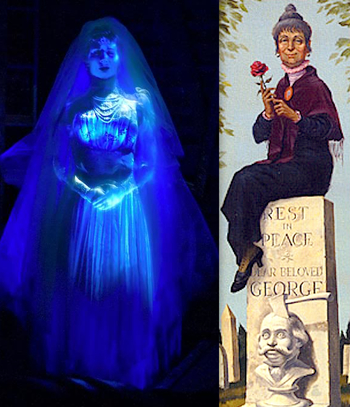 The Bride (see upper) is the character in the rides with the most different character interpretations. While most of them can be compiled as varying versions of the same "Beating Heart" character, in 2006, Walt Disney World and the Californian Disneyland got what is widely considered a different character: Constance Hatchaway, The Bride with a Past and a Black Widow, having married at least five men and murdering them to gain their fortunes (which is symbolized by the fact that with each new man she married, she added a new string of pearls to her necklace).

Perhaps the biggest Ensemble Darkhorse for the fans after the Hitchhiking Ghosts. The Hatbox Ghost (also nicknamed "Old Hatty") was a skeletal spectre seen in the attic with the bride, his head vanishing into the hatbox he carried and back to his body. Unfortunately, the character's trick often didn't work so he was quickly removed just days after the ride's release. However, he was so memorable that fans had been requesting his return for decades. Finally, after a 46-year absence, he made his triumphant, long-awaited return in May of 2015 just in time for Disneyland's 60th anniversary. 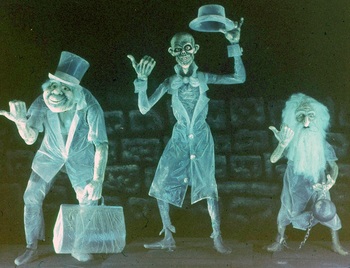 There's a little thing that should be mentioned: Beware of Hitchhiking Ghosts. These three ghosts appear at the end of the ride, hitching a ride in the guests' Doom Buggies. The Ghost Host comments that the ghosts will follow guests home after guests pass by a row of mirrors to see them sitting in their Doom Buggies.

The three ghosts are now commonly known as Phineas (the fat ghost in a top hat), Ezra (the tall skeletal guy) and Gus (the hairy dwarf prisoner). These names originally came from fan fiction written by cast members but became so well-known that they are now often included in official Disney-sanctioned material. They are quite the Ensemble Darkhorses and the iconic characters of the ride. They only make a brief appearance in the film.

A quintet of singing busts found in the graveyard scenes. They sing the ride's Theme Song "Grim, Grinning Ghosts". Four members of them appear in Phantom Manor, and four other versions appear in the film singing different songs to answer Eddie Murphy's questions.

The Caretaker and his Dog

The Caretaker and his dog 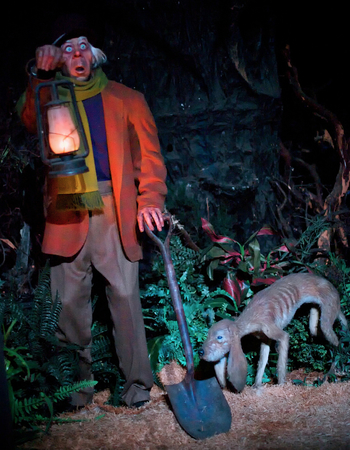 You think they'd both be used to them by now.
Possibly the attraction's only "living" characters, the Cartaker, also known as the Groundskeeper, maintains the mansion and the backyard cemetery guests see towards the end of the ride. With his dog at his side, he stands there holding a lamp and shovel, trembling and completely frozen in fear at the sight of the countless ghosts that abound the area.
Little Leota 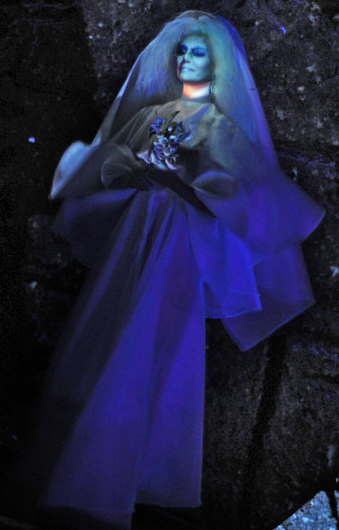 "Hurry baaaccck...hurry baaacck."
Voice Actor: Leota Toombs Thomas (original ride)
A tiny spirit, Little Leota appears at the end of the ride, bidding guests farewell but eerily invites them to "hurry back" and bring their death certificates in order to join the Haunted Mansion as new residents. Officially, her name is "The Ghostess", but it's never used. 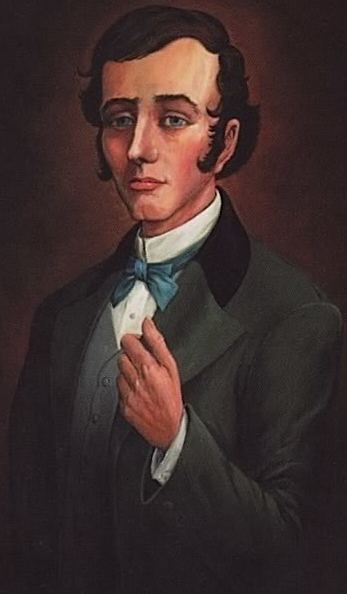 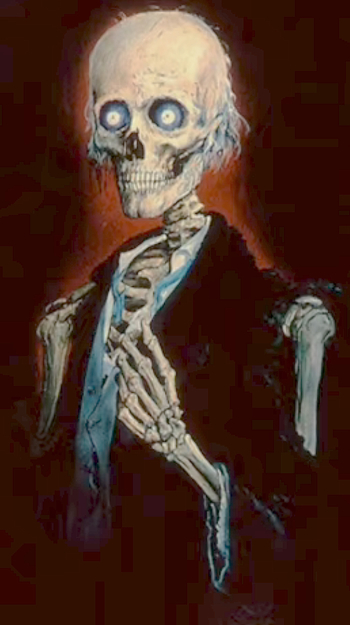 A gentleman whose portrait is featured in the original versions of The Haunted Mansion. Though he was never intended be by the developers, many fans have come to believe he might be Master Gracey, the former owner of the mansion, and since we're at it, maybe the Ghost Host (which some merchandise has adopted, even though the 'real' Imagineers keep denying it).

The Host of Phantom Manor. Unlike his original predecessor, he's the main villain of the ride. He was a very mysterious character and as a matter of fact, there were two hypotheses who could he be: an evil spirit who fell in love with Melanie and then killed her groom by hanging him by the neck from the rafters and then condemned the poor bride to haunt the house forever. In the second one, he was Henry Ravenswood, owner of the manor and Melanie's father. He disapproved of her wedding and plans to leave town and combined with his losses in his Big Thunder Mountain gold mine holdings, he snapped when an earthquake came and killed him. But his restless spirit would not be denied. What he did is the same as the first hypothesis.

The 2019 refurbishment of the attraction, in an effort to offer a clearer storyline, has chosen to firmly identify the Phantom as Henry, though WDI had been leaning towards that solution for a long time. 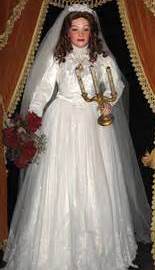 "You may not believe it but beauty once lived in this house."
Voice Actors: Oona Lind (voice), Katherine Meyring (singing)

The ill-fated bride of Phantom Manor. On her fateful wedding day, her groom never appeared, actually hung and murdered by the Phantom. Determined to wait for him, Melanie wandered her home until his eventual return, never removing her dress. However, even in old age and death, she still waits for a wedding that will never be.

The Haunted Mansion - The Movie

Ramsley was once the butler of the movie's version of Master Gracey. He is revealed to be the main antagonist.

A lower class woman who was engaged to Gracey. Her mysterious death led to Gracey's suicide.