Characters in The Grossery Gang. These characters are the ones that have appeared in the webseries, and not toyline-only ones. They are separated by the series they were first released in. 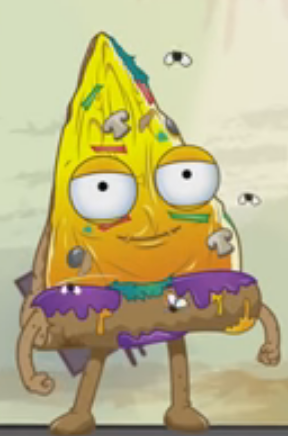 The leader of the main Grosseries of the Yucky Mart. A never-say-die kind of foodstuff, Pizza Face has the ability to find adventure and fun in the most unlikely of places. Despite a small prankster streak, he buckles down against enemies that threaten the Yucky Mart, and is always there to protect his friends. 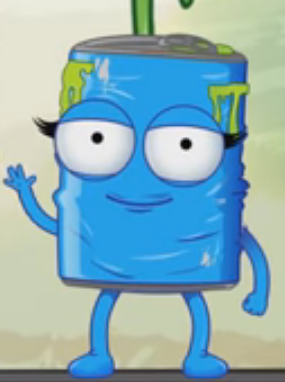 The sole girl of the main Grosseries. Sparkles is a soda can who ran out of sweetness a long time ago. Replaced with sourness and biting retorts, she is sarcastic and dry in her personality. Despite her demeanor, she's still friendly with the others, and is willing to go on their adventures. 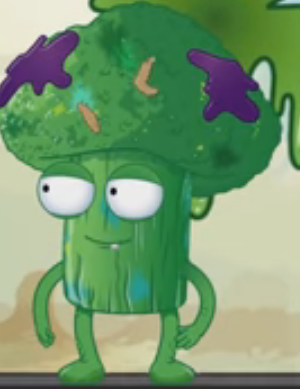 The "genius" of the team. Skilled in both the technological and the medical field, Doc Broc fancies himself as the brains of the team, though considering the others, that's still saying something. Creating new technology for the team, he always has a new gadget to help the others in a time of need. 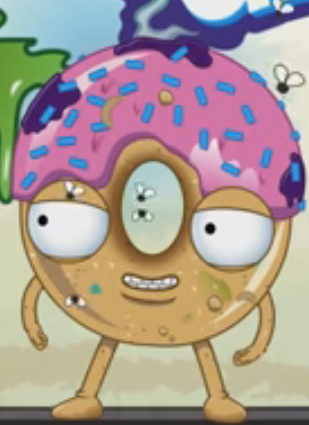 The party dude of the Grosseries. Rocky lives his life to the extreme, and is a wild party animal. Ridiculously uncouth compared to the others, he spends plenty of time pranking his best friends, much to their annoyance. Despite this, he's still close with them, willing to defend them first. 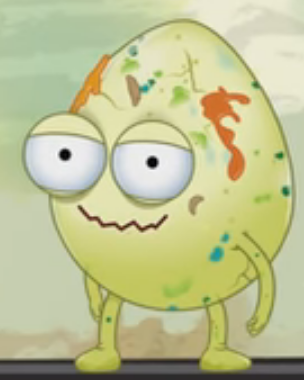 As the last of the main Grosseries to expire, Egghead is the youngest of the team. Very naive and childish, Egghead is often bullied around in jest by the others. Even though he's a bit slow on the uptake, he still jumps into the adventures with them. 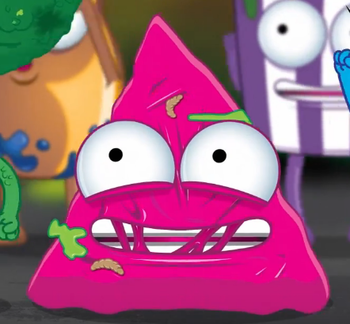 A chewed-up wad of gum that speaks in squelchy and squishy noises. He has the ability to stretch himself into various lengths to help the others. He spends most of his time hassling Meathead just for the fun of it, however.

A sextet of cans contained in the Yucky Mart's storage room. The six of them are the cryptic keepers of the legendary Trash Can Juice, the secret for giving Grosseries Putrid Power. Despite their echoing voices and tendency to speak in unison, they are surprisingly friendly and casual, and are good friends with Stinky.

An army Grossery and Franko's right-hand man. After a cryptic message told by a mysterious visitor about an impending bug strike, he and Franko set up camp by a Trash Can Juice spring, in preparation for the attack. The wilder of the two, Chips has a tendency to jump into battle much quicker than his friend. 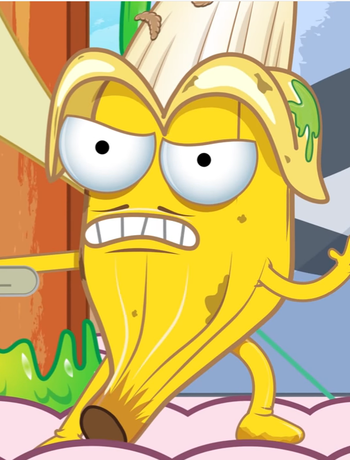 The romantic of the Grosseries. Handsome by food standards, Ricardo is a Hispanic ladies' man. Not the bravest of Grosseries, he often gets tangled in Meathead's schemes, but proves himself when push comes to shove. 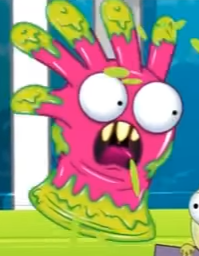 The silent oddball. Fingers doesn't speak, and is often found looming around the others, giving him a slightly freaky aura. No one can figure out what his deal is, or why he even does this. Despite this, he's always there, often taking up random jobs along the way. 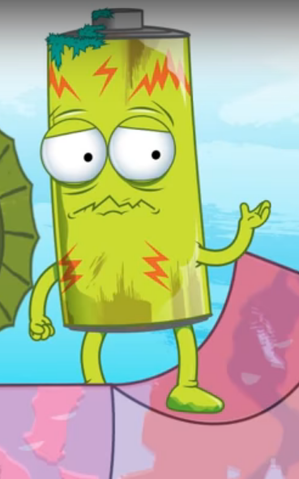 A jumpy and jolty battery. Surge is overloaded with juice, and is constantly on edge. Often stuttering and sending out sparks, he is a livewire that can hardly stand still, bringing unpredictable manic energy wherever he goes. 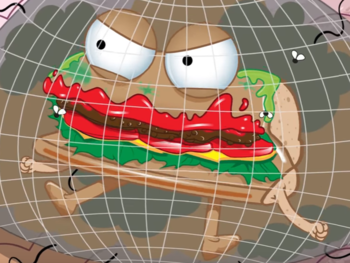 A showboater of a sandwich. Meathead thinks he's the life of the party, even if there isn't a party going on. He's loud and proud, while also lacking any manners, nor anything to back up that lack. He is constantly creating wild schemes that he attempts to get others to join in. As soon as they turn south, he'll start to blame everyone but himself, however. 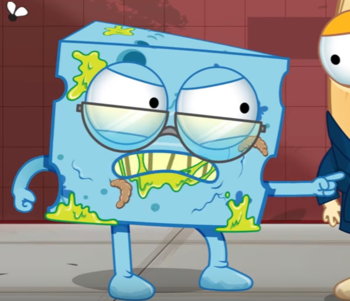 The grumpy elder of the Grosseries. As the oldest of the Grosseries, he has words of wisdom to share, whether they're wanted or not. He wallows in his nostalgia, and there's a hint that not all of the stories he tells actually happened. Despite this, the others can often find some surprisingly helpful hints in his stories, if they're willing to listen.
Series 3-introduced characters 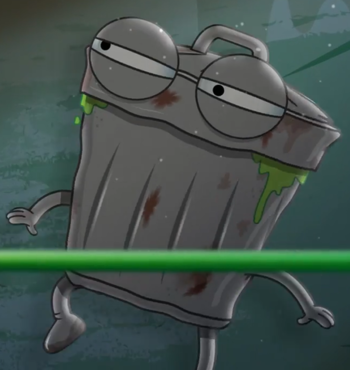 A strong, but silent, Grossery. Limiting his vocabulary to only a few words, Trash Head might not look the part, but he's surprisingly smart for what his limited vocabulary lets on. 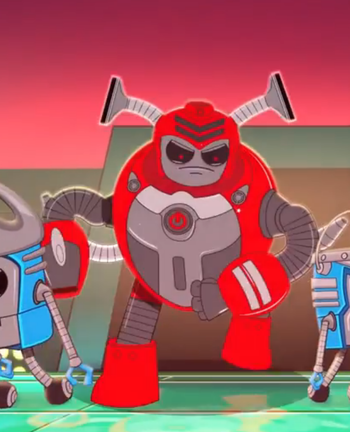 The first antagonist faced by the Grosseries. The leader of the Clean Team, Vac Attack's goal is to eradicate every ounce of filth in Cheap Town. Unfortunately for the Grosseries, this comes at the expense of their very existence. He has little humor, and is willing to even exterminate his own minions if they step out of line. 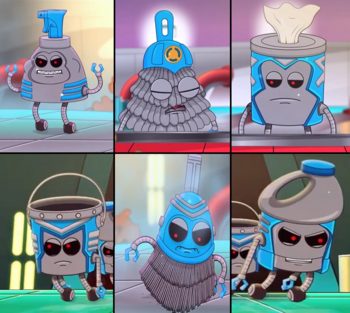 Vac Attack's robotic army. Made out of various cleaning supplies, they help Vac Attack in his takeover of Cheap Town. For the most part, they are loyal to their master, though some, such as Wet Wipes, have a few grievances.
Series 4-introduced characters 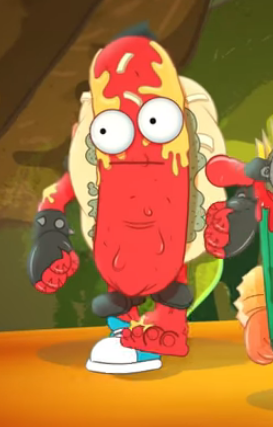 An army Grossery and Chips McGraw's right hand man. Along with Chips, he was warned about the bug strike, giving the two of them to prepare for it. He is much more grounded than Chips, though still holds a fight-happy personality deep down. 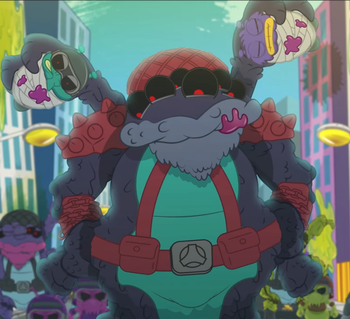 The second villain that the Grosseries face up against. Leader of the bug army, Arak Attack gives off a false sense of agreement to the Grosseries, as he agrees with their filthy ways. Despite this shared goal, he still wants the Grosseries out, so he can claim the turf for his army.

Crikey on the left, Chunder on the right.

Both voiced by: Tom Kennedy

Arak Attack's ammunition. Crikey and Chunder are two tied-up bugs that are used for launching from Arak Attack's arms. When they're not in battle mode, they're somewhat jovial, giving witty banter about the surroundings.
Series 5-introduced characters 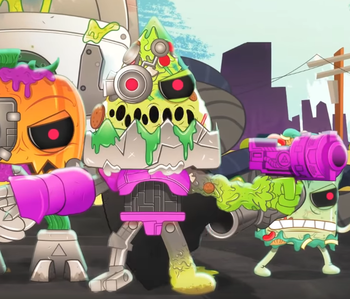 A twisted version of Pizza Face from a bad timeline of the future, and the third villain that the Grosseries face up against. He comes from a future that is too sanitary for Grosseries to live in, so he has come to the present to suck up their grossness to sustain him and his Rotbots, to the detriment of the Yucky Mart’s safety. 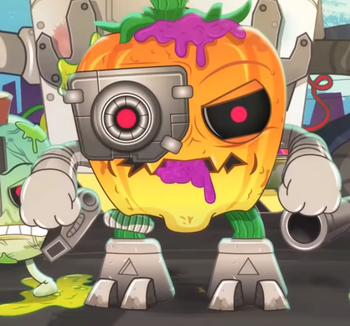 Rot Bot Pizza’s second in command. Like his leader, he is a Rotbot with mechanical attachments. Little is known about his personality aside from this, however. 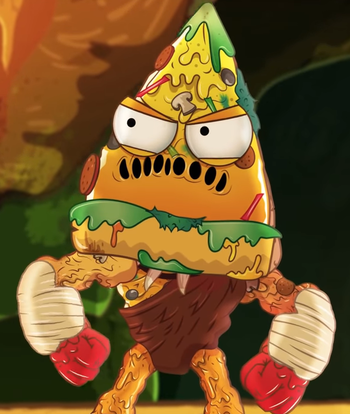 Pizza Face’s Prehistoric ancestor. Having been given a premonition of Rot Bot Pizza’s attack, he is the first to join up with the time travelling Grosseries, along with his pet dinosaur, Guzznugget. 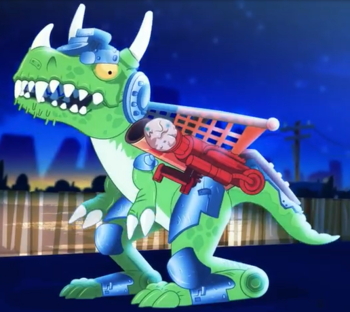 Cave Man Pizza’s pet dinosaur. Guzznugget is the caveman’s loyal steed, bringing him into battle and helping attack as well. 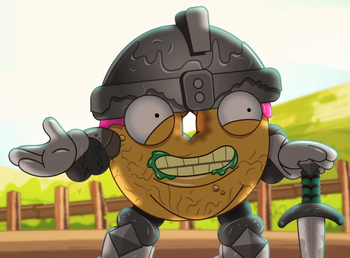 Rocky’s medieval ancestor. Knight Rocky is a knight of Scumalot, and the second to join with the time travelling Grosseries in the fight against the Rotbots. 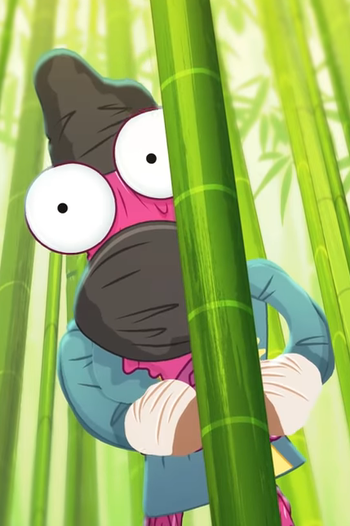 Gooey’s ninja ancestor. Living in ancient Japan, Ninja Gooey is a not-so-stealthy ninja, along with the third to join the Grosseries in the Rotbot’s fight. 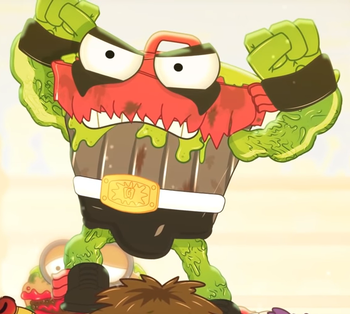 Trash Head’s luchador ancestor. As tough as his descendant, he is the undisputed king of the ring and wrestling champion. He is the final ancestor of the Grosseries to be recruited in the fight against the Rotbots. He is simply called “Wrestler Trash Head” in the credits, but is given his wrestling moniker in the episode proper.